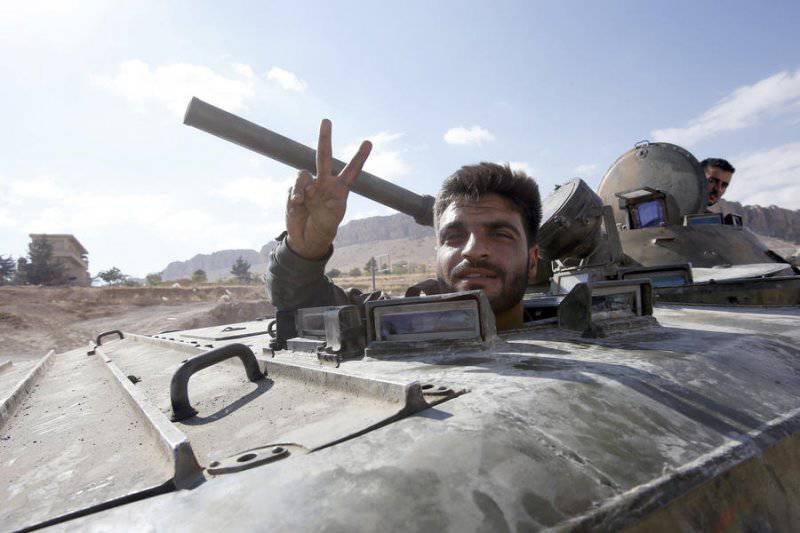 Government forces are developing an offensive in the south and succeed every day, the local newspaper Al-Akhbar notes. “The southern approaches to Damascus have in recent days become the grave for hundreds of militants who have penetrated from Jordan,” the newspaper writes.

To the north of Damascus, the intensity of hostilities has decreased markedly, military analysts say. The army strikes at positions of gangs in Adra and Yabrud. 10 mercenaries have been destroyed on the highway between Ras al-Ain and Sarh, near the Christian city of Ma'alyulya, according to SANA information agency.

According to him, in Dzhirud on the eve of the school year, which begins on September 21, the terrorists associated with al-Qaeda, defeated high school. In the central province of Homs, the militants launched several armed raids on the highway to Masyaf, creating a threat to the Alawite provinces. On a mine, set on the side of the road near the fork Rafiin, a passenger bus was blown up. 9 people died, there are wounded, who were taken in serious condition to the hospital.

In Jabbourin, a mortar attack was launched on the Popular Defense Forces post, 5 Alawite fighters were killed. In Kafr Nane, militant attacks cost 13 to civilians.

Another Syrian was killed in a mortar attack in Meshref, 6 were injured, according to SANA. Army units pursue armed extremists. 7 of them were killed in a shootout near the village of Akrad al-Dasnia.

In Aleppo, Syrian helicopters provided airborne support to Kurdish militiamen in the Sheikh Maksoud quarter. As a result, the fighters of self-defense forces were able to regain control over most of this strategic area, towering over the city. They also occupied the height of Sayyid, from which Aleppo is clearly visible. “The liberation of the hotbeds left in the hands of the armed extremists of An-Nusra will not take long,” said one of the Kurdish fighters. The fighting between the Kurds and the so-called Syrian Free Army continues on the outskirts of Beni Zeid, in the north-west of the city.

Meanwhile, the Al-Akhbar newspaper reported that, after a two-week break, Aleppo made telephone and mobile communications. In those urban areas where the situation has improved, municipal services have begun to rebuild destroyed utilities and energy and water supply.
Meanwhile, its intention to support weapons The free Syrian army was announced by French President Francois Hollande. speaking on
a press conference in the capital of Mali, Bamako, called for a "controlled supply of weapons to the Free Syrian Army."