Vladimir Putin: “We should be proud of our history and we have something to be proud of” 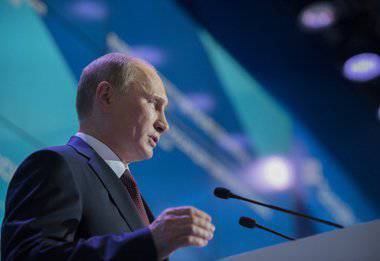 Moving forward for Russia is impossible without spiritual, cultural, national self-determination, especially in the face of global global competition, Vladimir Putin said today at a meeting with members of the Valdai international discussion club.

“It is obvious that our progress is impossible without spiritual, cultural, national self-determination. Otherwise, we will not be able to confront external and internal challenges, we will not be able to succeed in the conditions of global competition, ”the Russian leader said at a meeting with members of the Valdai international discussion club. From 16 to 19 September, the tenth anniversary meeting of the club is held, dedicated to the theme “Russia's Diversity for the Modern World”.

“We left the Soviet ideology, it is impossible to return it. The adherents of fundamental conservatism, idealizing Russia to 1917, seem to be as far from reality as the supporters of Western ultra-liberalism, ”said the Russian president, addressing the club members. At the same time, Vladimir Putin said that “we should be proud of our historyand we have something to be proud of. ”

The President stated that at present the military-political situation in the world is becoming aggravated, the world, according to him, is becoming tougher. “Sometimes not only international law is rejected, but even elementary propriety. You need to be strong in military, technological, economic terms. But the main thing that will determine success is the quality of people, the quality of society, intellectual, spiritual, moral, ”added Vladimir Putin.

The President of Russia urged not to forget that Russia was formed as a multinational and multi-religious state. “By questioning our multinationality, starting to exploit the theme of Russian, Tatar, Caucasian, Siberian, and of any other nationalism and separatism of any kind, we stand in the way of our genetic code, in fact, we begin to destroy ourselves,” Vladimir Putin emphasized. He focused attention on the fact that "the sovereignty, independence, integrity of Russia are unconditional."

The Russian leader mentioned that nowadays some countries are attempting to reanimate a unipolar model of the world and “blur” the institution of international law. “We see attempts to reanimate a unipolar, unified model of the world in one way or another, to blur the institution of international law and national sovereignty. Such a unipolar world does not need sovereign states, it needs vassals, ”Vladimir Putin stressed at the site of the Valdai International Discussion Club. “International law should be in place, not a strong law, not a fist law. Every country, every nation is not exclusive, but, of course, unique, original and have equal rights, including the independent choice of their development, ”the Russian president added, concluding that this is Russia's conceptual view, which“ stems from its own historical fate, from the role of Russia in world politics. "

Vladimir Putin called Eurasian integration and the Eurasian Union a chance for the participating countries to become an independent center, and not the periphery of Europe or Asia. The President considers the tight integration of Russia with its neighbors as an absolute priority. According to him, Eurasian integration will be built on the principle of diversity. “This is an association in which everyone will save their own face and political subjectness,” said the Russian leader.

Vladimir Putin also called for using the Soviet experience of supporting small nations to preserve their national identity: “I learned with interest that they were very attentive to this in the Soviet era. Almost every small nation had its own print edition, supported languages, national literature. By the way, much of what has been done in this sense before, we need to return and put into service. ” “In Russia, on which at one time they tried to hang the label of the“ prison of nations ”, not one, not even the smallest ethnic group has disappeared over the centuries. All of them preserved not only internal independence and cultural identity, but also their own historical space, ”the president emphasized.

“We see how many Euro-Atlantic countries have actually taken the path of abandoning their roots, including Christian values, which form the basis of Western civilization. Moral principles are denied and any traditional identity is national, cultural, religious or even legal. A policy is being pursued that puts on one level a large family and same-sex partnership, faith in God and faith in Satan, ”said Vladimir Putin at a club meeting. He noted that “the excesses of political correctness go as far as seriously mentioning the registration of parties aiming at promoting pedophilia”. The President stated that "this is a direct path to degradation and primitivization, a deep demographic and moral crisis."

Ctrl Enter
Noticed oshЫbku Highlight text and press. Ctrl + Enter
We are
Vladimir Putin: Russia has always developed as a “blooming complexity”, as a state-civilization, fastened by the Russian peopleOn the other side of the “red” and “white”. Izborsk Club Report
Military Reviewin Yandex News
Military Reviewin Google News
144 comments
Information
Dear reader, to leave comments on the publication, you must to register.