20 September 2013
18
Not too successful start of a landing career tanks “Harry Hopkins” and “Tetrarch” did not completely disappoint the tank building department of Vickers. The designers were confident in the prospects of the selected suspension scheme. Indeed, there was no place for light tanks on the Western Front, and affairs in North Africa and the Far East in 1941-1942 were not developed in favor of the British. The success of German self-propelled guns clearly spoke of the need to introduce vehicles of this type in the British army. So, the idea arose to create a self-propelled artillery fire support unit based on the tank. The initiative of the company Vickers was supported by the army command. 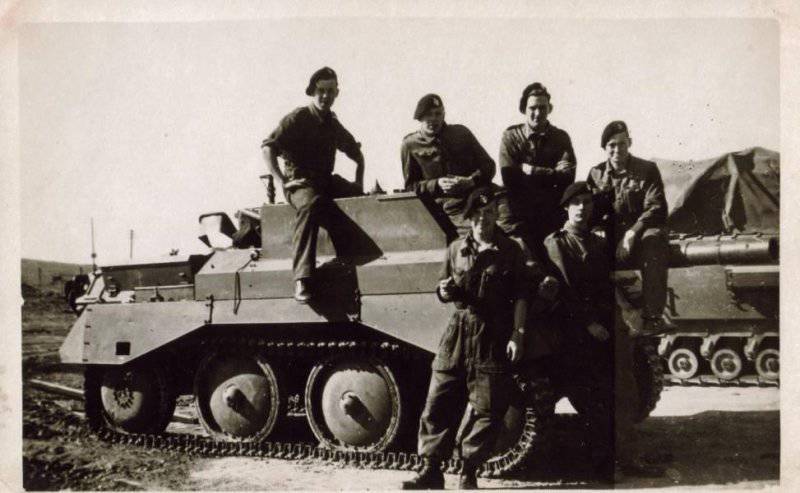 The British designers, striving to create for the airborne troops a machine with good armament, booking, speed and, most importantly, suitable for transportation by means of aircraft, developed an Alecto self-propelled gun. The name was not chosen by chance: in ancient Greek mythology, Alecto is the goddess of vengeance, one of the three Furies. Alecto translates as ruthless, unforgiving. However, since the light tank of Harry Hopkins was originally taken as the basis for the new self-propelled artillery, the machine wore the designation “Harry Hopkins ICS” (“Harry Hopkins near infantry support”) and the A.25 Е2 index. Later, the car was recognized as an independent model and was given its frightening "divine" name.

The engine compartment of SAU Alecto was located in the stern. As the power plant, as in the “Harry Hopkins” tank, the Meadows horizontally opposed Meadows 12-cylinder carburetor engine with liquid-cooled power 149 hp was used. The composition of the transmission included: the main friction dry friction, stepped drive shaft, gearbox, turning mechanism. The chassis was equipped with an individual hydropnemodynamic suspension for each support roller. The suspension consisted of four rubber support wheels, where the drive wheel is front and rear roller is sloth. Single-lobe caterpillar, small-part with pinwheel type of engagement. 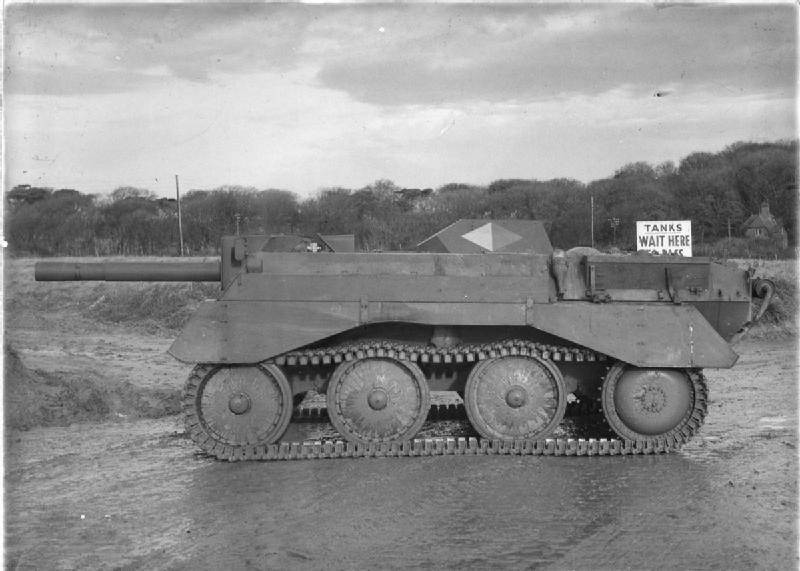 Harri Hopkins tank was removed from the tower, and the low open-top cabin was converted to accommodate five crew members. 95-millimeter howitzer was installed at the very bottom of the front sheet. This allowed us to get a self-propelled gun with a low profile and, accordingly, small weight and dimensions. The angles of horizontal guidance were 30 degrees in each direction. The ammunition, consisting of 48 shots, also included smoke and high-explosive shells. At the end of 1944, the first prototype of Alecto Mk.I. The war came to an end, and in service there was a significant number of vehicles of the same purpose. In addition, during the test, several technical problems were identified, which were not quickly resolved. That is what caused the rejection of SAU Alecto on arms.

However, the designers did not stop there and developed a number of modifications.

Alecto Recce (Alecto II, Mk. II) SAU equipped with a 6-pound anti-tank gun (57-mm QF 6 pdr gun). New weapons allowed to effectively use this self-propelled gun against the Japanese tanks, but against the Germans, it was clearly weak. They managed to build only a few prototypes and pre-production machines, but they did not accept them. 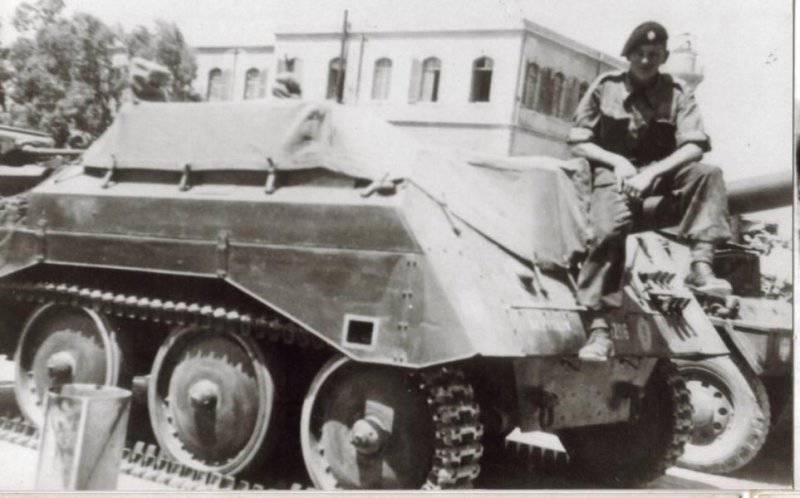 Alecto III is a project with a 25-pound howitzer (87,6-mm QF 25 pounder gun-howitzer). Despite the start of construction, not a single prototype was made.

Alecto IV is a project with 32-pound (94-mm) howitzer, the project was not implemented in the gland. The reason for this was to bring to the maximum limit of fire power ACS. Chassis weight characteristics reached a maximum value. In fact, a 94-mm howitzer without revising the recoil system during a shot could disable the Alecto ACS.

In addition to self-propelled artillery mounts, the engineers tested the variant of the engineering vehicle equipped with the Centipid mine trawl (Centipid, centipede), which was originally intended for Sherman Crab. 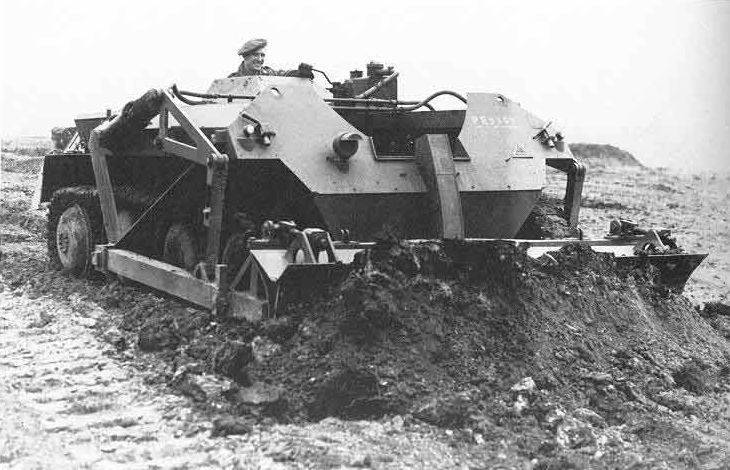 Another development on this base was Alecto Dozer - the weapons were dismantled, and in the front of the machine they installed a double-faced dozer blade with a hydraulic drive. The controls of the blade are located on the roof of the hull. Made just a few of these machines.

Another rather interesting modification was the attempt to make the “Alecto” light tracked armored personnel carrier. Compared to Universal Carrier, this car differed noticeably for the better in terms of booking thickness and speed. After in the 1945 year, work on the SAU were stopped, Vickers designers decided to convert one of the prototypes into an armored personnel carrier. Thus, the engine compartment was moved to the front of the case, and the thickness of the armor plates was increased to 38 mm. In the rear of the hull equipped fully enclosed troop compartment. The “box” of the compartment was fully armored. In the aft part of the troop compartment for the landing-landing of soldiers a double-wing door was performed. Fans were installed on the gable roof than they had previously largely neglected. Thus, it turned out a good armored personnel carrier, designed for the transport of 6 soldiers. However, the cessation of the release of “Harry Hopkins” tanks led to the closure of this modernization program of Alecto. It is not excluded that the armored personnel carrier remained in a single copy, and was subsequently dismantled. 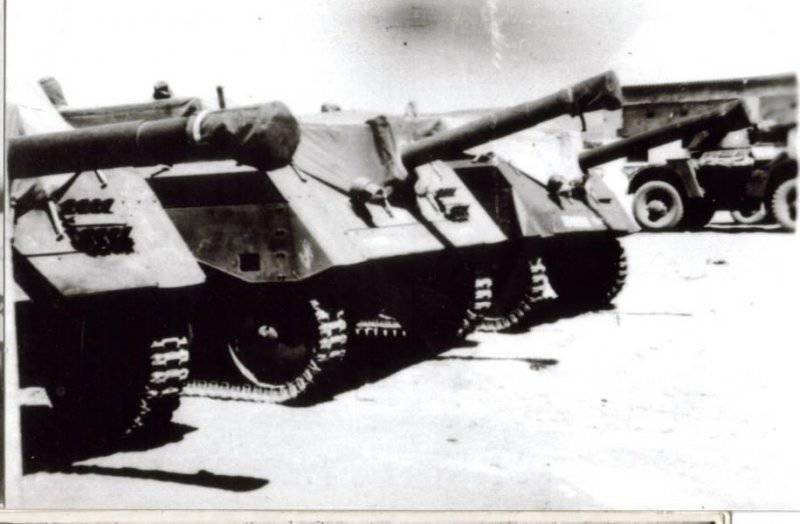 Work on Alecto began in the 1942 year, but it developed very slowly. This delay was caused not so much by technical difficulties, but by the disinterest of the General Staff in projects based on light tanks. By 1945, none of the projects was brought to the stage of mass production, so with the end of the Second World War, interest in these developments instantly disappeared, and the work was stopped. With the closure of the project Alecto ended the era of light tanks and self-propelled artillery installations, which the British wanted to give up before the outbreak of war. 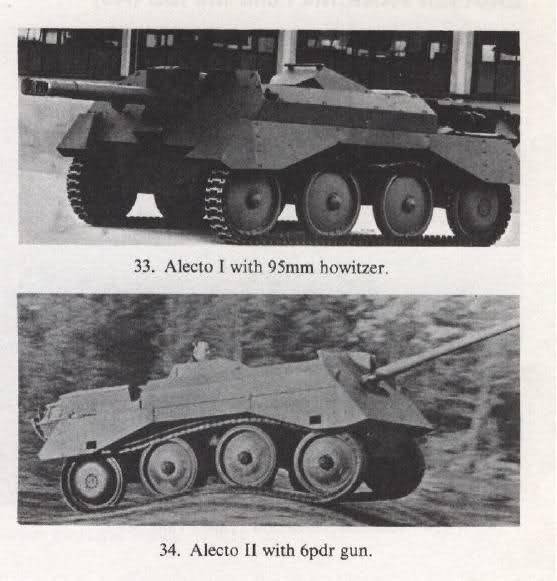