Ministry of Defense Board: military reform plans are being implemented

20 September 2013
9
The other day, Defense Minister Sergei Shoigu opened a regular meeting of the Defense Ministry Board. The main objectives of this meeting, held in the Russian capital, were: interim monitoring of the progress of re-equipment and re-equipment of units and units of the Russian army, preparation for the West-2013 exercises (joint exercises of the Russian and Belarussian troops), work to recruit military personnel -contractors, the quality of the implementation of federal targeted programs. 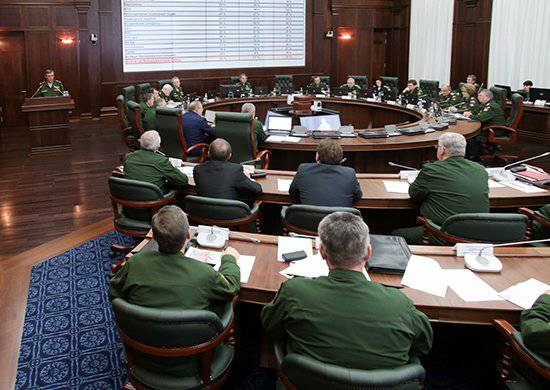 Shoigu recalled that today there is an active modernization of the Russian army, as a result of which the renewed Armed Forces should be able to resist, quote: “even the most high-tech adversary”. It was about the course of the renewal and re-equipment of individual clusters of the Armed Forces that the Minister of Defense first asked the generals.

According to the speakers, the rearmament is proceeding on schedule, and there are no failures in terms of the supply of new military equipment and equipment. weapons no troops. Chief of the General Staff of the Russian Federation Valery Gerasimov said that today a system has been built in the Russian army, in which each commander knows for sure when and in what quantity a new vehicle will come to his military unit. According to Gerasimov, he knows this average commander and the contract recruitment plan, and the necessary pace of infrastructure modernization, and even the schedule of resettlement for officer families. The Chief of the General Staff noted that in the current and future years, the plan for the implementation of military reform was defined as monthly, but starting from 2015, this plan will be transferred to quarterly mode.

It is worth touching on those points of the plan that turned out to be fulfilled, again, if you believe the reports of the generals of the Defense Ministry at the College.

As is known, the general modernization of weapons to 2020, according to the plan, should be carried out at 70%. In other words, by 2020, the new (and relative new) military equipment in the Russian subdivisions should be 70%. More recently, representatives of the financial government sector (officials from the Ministry of Finance) said that 70% modernization of weapons and equipment for the army in the current state of affairs in the economy will be disastrously expensive, and therefore, they say, should be limited to a value of 50%.

Valery Gerasimov reported that there is no cause for concern, and that while the program runs strictly on schedule: military technopark and an array of weapons updated to 17%, and by the end of the year the Defense Ministry will reach the planned 19% (plan for 2013 year).

The re-equipment of the missile brigade of the Western Military District with the Iskander complexes has been fully completed. By the end of December, the military ministry plans to re-equip the Iskanders with another rocket brigade, and the Yars complexes - the Strategic Missile Forces regiment. The troops are scheduled to receive communications, equipment, new weapons and ammunition.
Turning to the topic of recruiting the Russian army with contract servicemen, it turned out that here the Ministry of Defense even overfulfills the plan. At the beginning of September, 2013 was taken to contract service by about 48 thousands of servicemen. Valery Gerasimov noted that this is 6% higher than those indicated as planned. He also said that if the tendency to recruit at the 7 level of thousands of military personnel per month continues, by the end of the year the Armed Forces will be equipped with 82%, while today the equipment is about 80,6%.
The generals are of the opinion that if a law is passed that allows graduates of higher educational institutions to sign a contract with the Ministry of Defense for two years immediately after they graduate, assuming the rank of private and, over time, non-commissioned officers, the number of contract soldiers will increase significantly.

Interesting information at the Collegium was expressed about the reform of the Air Force. Military commanders agreed on what an undertaking is like consolidation aviation bases with the elimination of aviation divisions and regiments, did not become positive. The fact is that many military airfields were simply not ready to accommodate numerous military aircraft and helicopters. In a number of cases, airbases have turned into a real airborne bunch, which, in the event of a hypothetical attack, can only play into the hands of a potential enemy. The ability to destroy an entire airbase with dozens of military aircraft on the ground with one blow is a real gift for any enemy. Such reflections led to the decision to begin the revival of air divisions and regiments. As the saying goes, it's better to catch yourself late than never to catch your eye ...

By the way, with the resumption of the work of the aviation regiments and divisions, there are also “trips” of high military officials and government representatives in charge of military technical issues to Russian cities and villages in which the aviation centers once existed (or in the “breathing mode”) . One of these trips in the first decade of September took place in Borisoglebsk (Voronezh Region) - the city of the glory of the country in which the famous Valery Chkalov once began his journey in aviation, and in which there was a flight school named after him. Today, there is an aviation center at the school site (flight base of the second category).

The delegation was headed by the military and civilian officials who arrived at the Borisoglebsky airbase, Deputy Prime Minister Dmitry Rogozin, who announced an imminent increase in the logistics of the flight center and the return of the lost name and status to it.

Representatives of the Ministry of Defense decided to return to the idea of ​​resuming construction (or restoration) of so-called departmental housing for military personnel. According to Gerasimov, before the end of the year 16 military camps will be fully equipped, around 200 barracks, canteens, sports halls and complexes, educational buildings.
The main thing is that, referring to the restoration, construction and arrangement of military real estate, the representatives of the Ministry of Defense made it clear that there is money for it, and the plan is being carried out without disruption. I would like to believe that this is true, and no revision in the direction of the next cuts, optimizations, cuttings and seals in the near future is expected.

I would also like to hope that the reports of the generals coincide with the objective realities, and not created with the aim to embellish the course of the reform and not to anger the higher leadership. Otherwise, we can make far-reaching promises and draw extra wands ...

Ctrl Enter
Noticed oshЫbku Highlight text and press. Ctrl + Enter
We are
Update the Russian Navy. In the gland. Part of 1“Indra-2012” - to be teachings!
Military Reviewin Yandex News
Military Reviewin Google News
9 comments
Information
Dear reader, to leave comments on the publication, you must to register.