Catalonia: independence will not be

23 September 2013
38
15 September it became known that Madrid refused to Barcelona to hold a referendum aimed at the so-called "self-determination" - in fact, the separation from Spain. Back in January 2013, the Catalan Parliament approved a declaration of sovereignty, which made it possible to issue a statement on the referendum. To make it clear what we are talking about, we must point out that Catalonia accounts for about a quarter of Spain’s GDP. 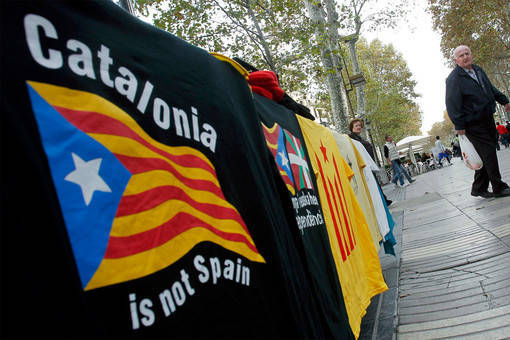 In late January, the Catalan parliament approved a symbolic declaration of sovereignty, notes "Lenta.ru" with reference to The Guardian. 85 voted in support of the declaration, 41 voted against, two abstained. Independence from Spain was supported by the ruling regional bloc "Convergence and Union" and the "Republican Left Party", while local socialists and the ruling People's Party in Spain opposed self-determination.

However, in May, the Spanish Constitutional Court granted the request of the central government for the suspension of the Catalan declaration. And in mid-September, the Spanish government completely refused to Catalonia in a referendum. According to "RG" with reference to the RIA "News”, The answer to the head of the region, Arthur Masu, was sent by the Prime Minister of Spain, Mariano Rajoy. The head of the cabinet noted:

“The ties that unite us cannot be broken without enormous financial losses.”

This, of course, does not mean that Catalonia will now stop trying to disconnect and create its own state. The tendency towards separatism in autonomy is very strong.

As the IA "REGNUM", the Catalan separatists of September 11 carried out a powerful propaganda campaign: the inhabitants of the province made a living ring with a length of 400 km - from Barcelona to the Pyrenees Mountains. The human chain stretched across the territory of 86 settlements. The demonstration was attended by 400 thousands of people.

The action was called “The Catalan Way to Independence” and was timed to coincide with the 299 anniversary of the capture of Barcelona by Spanish troops and the elimination of the formally independent status of Catalonia as part of the Spanish crown.

As noted further by the news agency “REGNUM”, she organized the action “National Catalan Assembly”, whose activists are in favor of the creation of “Great Catalonia”. The latter should include in the territorial composition of the Catalan region of Spain and parts of Valencia, Aragon, the Balearic Islands and even parts of the territory of France and Italy.

Such a steep turn of separatism is due to the economic crisis and the harsh anti-crisis policy of Madrid. In March, the 2012 of the year in Spain sounded a discussion about economy policies in the regions, enlivening the theme of rich and poor provinces. In 2009, Catalonia gave the federal government 19,49% of budget revenues, and in return received 14,30% of the amount of budget expenditures. 7,2 million people (16% of Spain’s population) live in Catalonia, providing 19% of the total national GDP. Local separatists are sure: Catalonia can live better without Spain.

“The first thing that catches your eye is that local flags are hung everywhere: four red stripes on a golden background are visible on the balconies of the houses, on the windows, on the walls, on the windshields of the cars, on dog collars. Even in the smallest village there is a tall flagpole with a banner of “sanieri” fluttering on it.

The only place where you can see the flag of the Kingdom of Spain in Catalonia is government buildings of national importance. ”

The Catalans understand Spanish, the author notes, but they do not speak it among themselves. Hearing Spanish today in Catalonia (residents of the country call it Castilian) can be as rare as seeing a sign written on it or a road sign. But ten years ago, Barcelona was “Hispanic”.

Among the Catalans there are indeed “ardent supporters” of independence. A lady of about sixty, with whom Catherine Bogach was able to talk, is sure: Catalonia will be free. “Next year will be three hundred years, as the Spaniards conquered us. Enough! We are supported everywhere, and we will certainly win! ”She exclaimed.

Other Catalans are cautious about the prospect of independence. The author cites an example of the views of a girl of years 25-ti named Ana and her 30-year-old friend. Ana believes that the problem may be not only the opposition of the Catalan separatism by the Spanish authorities, but also Europe’s special desire to recognize Catalonia as part of the European Union. Ana's friend said the following: “Oh, are you talking about separatism? Oh well. Personally, I support Bob Marley, who said that there should be no borders in the world at all and that love should unite everyone. ”

But the opinion of a woman at the age of forty with the Catalan name Montserrat. She said that during the crisis, Catalonia "was simply robbed." In the year Catalonia gives Spain on 16 billion euros more than it receives back. As a result, she has to save on education and medicine. “We are now paying both regional and state taxes, but also the content of the king,” said the woman. - And who is he to us, one wonders. Yes, he is generally Bourbon, French! Let the Spaniards deal with it themselves, without us. ”

Montserrat recalls that the Catalan national holiday is a day of defeat: “Foreigners are surprised that September 11 has so many flags. They think that this is a sign of condolence and US support in their mourning for 9 / 11. And I have to explain that we were raped on that very day, only much earlier. ”

From the artistic and emotional back to the pragmatic and real. That is, to what serves as a stumbling block on the path to the independence of Catalonia.

In the article for "ABC" September 17 (translation source - "Inopressa") Unai Mescua and Isabel Miranda list the points that Catalonia will lose if it becomes independent of the EU.

The EU Commissioner for Competition confirmed that the separation of Catalonia from Spain would mean the withdrawal of the current Catalan Autonomous Region from the European Union. Journalists list the consequences of the “separation” of autonomy with the European Union:

1) The Catalans will close their entry into the 28 countries market. Moreover, the EU may impose restrictions on the importation of Catalan goods.

2) There may be import duties for Catalan goods in the EU, which will reduce their competitiveness. Independent Catalonia will cease to be part of the WTO, Madrid-based economist Mikel Buesa says, and negotiations with this organization will last 5-10 for years.

3) Sharp decline in GDP. The so-called “border effect” will cause a decrease in turnover. According to Bueza, this effect on a couple of new duties will bring down the GDP of Catalonia by 25%.

4) The use of the euro as a currency will be a burden for Catalonia. An independent Catalonia with a “foreign” currency will not have the tools of monetary policy to deal with financial crises.

5) Citizens of independent Catalonia will lose their right to work in any EU country.

6) There will be no guarantee of bank deposits (according to the general norm in the EU, it applies to deposits up to 100 thousand euros).

7) The European Union will cease to allocate funds for development.

8) Loss of consular protection for citizens.

10) Loss of the right to vote in municipal elections in other EU countries.

11) The loss of the special rights of travelers in the EU.

12) Eliminate the access of Catalans to educational and educational programs, for example, to the “Erasmus” program.

13) Termination of access to financial support for small and medium businesses.

14) The loss of equality of Catalans as buyers and bank depositors (today the EU guarantees the citizens of their countries the right to pay for goods and services the same price as the locals pay).

15) Closing access to higher authorities (for example, it will not be possible to complain to the European Parliament).

16) Loss of influence at the global level: from the already mentioned withdrawal from the WTO to the exit from the UN and other international organizations.

And no expert on the global economy, we add, is not able to count today to what extent the expected benefits of independence may outweigh the disadvantages. Yes, and can they? .. After all, the increase in the national wealth of Catalonia redistributed by Madrid is seen there by the residents, focusing on the current economic model, mistakenly believing it to be stationary. But the model is not static, but mobile, and can collapse overnight - once the provinces are separated from Spain and “automatically” withdrawn from the EU and the WTO. What brings success today may well be a failure tomorrow.

On the way to the independent economy of Catalonia, most likely, would have to go through a severe crisis. Of course, the crisis would have hit the other end on Spain, and even without that, it’s already hard. By the way, Spain would have imposed a veto while accepting a new member in the EU. And so these duties! In this regard, in those EU countries where separatism is not favored (and they are not favored everywhere), they would have tried with all their heart.

In short, it is unlikely that the Catalans expect a "victory" in the form of independence. And it seems strange in this light to try to imitate the Balts. In Latvia, which had long since abandoned Soviet tutelage, it is predicted that the country will cease to exist, if not by 2020, but by 2030, the year. Why? Yes, because by that time all its inhabitants will find employment in other European countries.