USA - the country of denunciations 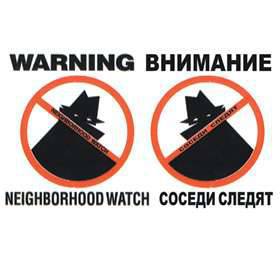 We bring to your attention an interesting testimony of a Russian young man who has lived in the US with his family for some time.


"All suspicious acts and figures that create danger and discomfort in the United States must be immediately exposed, neutralized and punished!" - This is the motto of every exemplary US citizen.

From early childhood, all citizens of the United States are inculcated with the idea of ​​the need for anonymous assistance to state executive and judicial authorities. In criminal situations, vigilance and help are really just necessary. However, when it turns into mania, it becomes just scary to walk the streets ...

In the US, I was constantly aware that the sea of ​​hidden eyes and ears was following my every move and word. You do not think that these are my obsessive ideas. Not. This is different. Pure American. Signed.

In the USA, there is a special road sign on many streets with the image of a huge eye or a silhouette of a thief in a hat, coat and glasses, with the accompanying inscription: "Neighbors Watch!" Those. watch, overhear, record and communicate!

On every bus in the USA and every five kilometers of the American highway there is an advertisement with the inscription: "Denunciations are accepted through the text or by phone 012, anonymity is guaranteed to all informers!"

Well-educated informers are encouraged by diapers. Anonymity and immunity provided to them. The most powerful processing in schools teaches every American schoolchild to denunciations from school, primarily parents, instills a love for the system, in the sense that she (the mother system) will always help them to defend their personal rights, the rights of a free man of the USA! A first grader is hammered to the smallest details of the behavior of all family members, who else should say, how to dress, how to lie, how to shower, etc. And about the slightest inconsistency in the behavior of parents with the American model proposed in school, they should immediately be told to a “kind” teacher, who will immediately take appropriate punitive measures.

If in the USA we, the parents, do not speak about something, but think about something “normal for Russia” - reading a fairy tale to a son lying in bed, or about the father’s desire in a hot time to bare torso in the garden, or just a father’s request to the child to be removed from the nursery or the demand to do homework - the retribution for the frivolity of the parent will be terrible and urgent. Even a slight cry and at least one harsh look at the belt - in the United States we must immediately and forever forget. Otherwise, deprivation of parental rights ... Thus, a child in the United States quickly enters the role of supervisor, openly blackmailing parents.

Not having time to fly to a free country and get enough sips of American freedom, problems immediately fell on me. First, in the US, we were not allowed to rent a two-room apartment, arguing that the relevant US law — we were obliged to rent only a “three rubles”.

We had to rent a house in a cheaper place among the Arabs. Our house was chock full of alcoholics, who walked, shaking and dreaming only about alcohol. But they did not report on us, and we were grateful for that! ..

One day a purely American incident happened to us. We walked with the whole family through the city park, enjoying the weather and relaxation. Our three-year-old son, riding a bicycle, happily accelerated, was five meters ahead of us, and then obediently waited ahead. Speeding once again, he suddenly stopped at a junction with another sidewalk, which was about ten meters away from us. My baby hit the brake on his tricycle at the wrong moment. By a purely American coincidence, a woman in a tracksuit and a passing police approached the place where two sidewalks intersected, where our young, ill-starred cyclist stopped. A warming up American woman suddenly began to scream, sharply raise her hands up and even jump, attracting the attention of the police. Then, looking back and seeing us, she, as if nothing had happened, continued her exercises and ran on. After a couple of seconds, we approached the son-cyclist.

- Everyone stand! Do not move! Wait for further orders! - the watchful policeman shouted to us right from the car window.

Then he got out of the car and leisurely approached us. First of all, he demanded to show him all our documents, without answering questions about the reasons for the declaration. After rewriting all our data: names, addresses, places of work and the like, in the end - he asked for our explanations:

“Why has your son been in this park for twenty minutes now without supervision?”
My indignation had no limits!
- What slander, what twenty minutes? In less than five seconds, I protested.
- No, that woman applicant said first that “twenty minutes had passed”. I recorded. The signal was received from her.
- Understand that twenty minutes is just unreal. The child was always with us, - I insisted.
- Stop. Stop! - here the policeman raised his hand and stopped my excuses.
- Another such signal - and you will be deprived of parental rights! Point! - Quietly cut off the guard.

And then I remembered that in our American residential complex, where we rented an apartment, there was a sign at every corner: "It is not allowed: walk on the grass, ride a bicycle, roller skates, play ball!" It was the American world. And I, Russian stupid, quietly allowed all this to my child ... It turns out that now if another American snitch seems to be performing his own kind of purely American debt, having attached three boxes to us, then our own little son and tiny daughter simply taken away?

From this moment in the USA I have lost my calm. Now we had to constantly look around. No, no, not for some nasty hooligans. And on the exemplary, guarded US citizens. After all, the higher the education of an American, the more rights and freedoms to denunciations he has.
Denunciations in the US can be expected from everyone. Up to your kind and caring neighbors. They can stitch a scammer about the fact that you have a little mess in the front garden or grass overgrown by two centimeters ...

American neighbors are especially fond of gaining confidence by asking about repairs in progress or past repairs in your home, and immediately after “conducting intelligence” in writing, report all this to the appropriate US administration. The management is immediately after receiving a denunciation - it sends its husbands inspectors to you. Those, immaculately performing their work, bite into the goal set for them, rewriting every little detail of fresh repair. First, a purely American fine is granted for permission to illegally modernize that has not been bought in advance. And then you are provided with tariffs for the purchase of permits for changing each point. Painting the room is one, changing the toilet is another, the floor is third. You can buy these "permissions" all at once, in the form of a "package" with a favorable discount for you.

Refusing to pay - even better. Through the court you just take the house. But here's the most amazing thing in the USA. The authorities, taking away your house from you, will make a full assessment of your entire modernization for free. Which, of course, immediately raise the market price for your property. This new price will be immediately approved and legitimized. From this very minute for the rest of your life you will pay an increased annual tax for a stunning, modernized, new, expensive house !!!

I had another incident in the United States. I worked with my father in the same office, and we often had to go to work on the same machine. My parents lived not far from us, therefore, having a free minute in the morning, I preferred not to stand at the entrance, but to go towards my father's car, rejoicing in the morning freshness.

This time everything was as usual - the approached father's car caught me after a short walk. But I didn’t manage to close the door of the car behind me, when suddenly an old woman jumped out of a neighboring house, who seemed to say a pretty nice moment a minute ago. This old woman now stood in front of our car and blocked the movement. Her face twisted horror.

- Do you need help? - I asked.
“No,” answered the old woman. “It seems that now you need help!” - and she pointed to a police car with sirens on it that approached our car.
Instantly from all the houses all our good-natured wishes of Good Morning ran out. For some reason, almost all of them shouted to the policeman in chorus: "This is it! This is it!"
And then like a cork from a bottle in front of everyone, the main neighbor jumped out, with a huge red face. He excitedly began to nod to the policeman, pointing in my direction: "This is exactly he!"

The policeman, as it should be, asked us for all the documents he had with him, wrote down the address, place of work, and marital status. Only after making all my data in his journal, he calmly described everything that happens. From his words it appeared that yes, it was really me, and there was no mistake. In addition, from that moment on, as the police officer explained, I already needed legal assistance.

“There were signals about a stranger-maniac walking at seven thirty in the morning along this and next to this street,” the policeman calmly told me.
I immediately looked at myself: ironed trousers, a fresh shirt, a bag with lunch and a pass hanging on my chest to scientific laboratories. I looked like an ordinary American clerk, but far from being like a bum or a maniac.
“Unfortunately, there were so many signals sent to you that I would advise you not to go here anymore,” the policeman concluded.
- Why then sidewalks in the US? - I did not give up.
“Sidewalks in the USA,” of course, to follow them, the policeman retorted. But if you walk on them here - your problems may repeat! - he added.
- What am I, now do not walk the streets? - I asked.
- Of course, you can walk. And then answer for it in court. But I would advise you to meet with your dad at the door of your porch. The question is closed!

Then I did not know that in the USA there are "secret" regulation of the directions of pedestrians. If everyone goes one way, and for some reason you go the other way, then this is punishable by local laws. For example, you are obliged in court to prove your innocence that you did not go to the station or stop in the morning - like everyone else, but, on the contrary, in the other direction. In the US, this is not an exaggeration, but a real crime, from the point of view of ordinary American neighbors who have the right to call a police outfit for you.
... How nice it is for us to be here, in Russia, among our people. Here, no one tells me where and how I walk, where and how I live, how much to breathe, how much to breathe. In Russia, they do not force me to swallow American freedom, chewing human rights from morning till late at night ..

Ctrl Enter
Noticed oshЫbku Highlight text and press. Ctrl + Enter
We are
Interview of V. Putin to Channel One and the Associated Press AgencyWhat you didn't want to know about England
Military Reviewin Yandex News
Military Reviewin Google News
180 comments
Information
Dear reader, to leave comments on the publication, you must to register.