Concern "Kalashnikov" will be presented in Izhevsk

19 September 2013
69
Today, September 19, on the Day of the Russian gunsmith in Izhevsk, the official presentation of the new Russian Kalashnikov concern will take place. The gunsmith day in Russia is celebrated for the second time. Mikhail Kalashnikov asked for the establishment of this holiday at a meeting with Vladimir Putin in 2010, and already in 2011, this holiday appeared on the Russian calendar of professional dates by presidential decree. Last year, the festival was widely celebrated in Tula. In 2013, it is hosted by the capital of Udmurtia, which is rightfully armory the capital of our country. The main holiday event of the day is the official presentation of the new Russian arms concern Kalashnikov.


The opening ceremony of the concern will be visited by the first persons of Russia, as well as representatives of the national defense industry complex. The initiative to create the Kalashnikov concern belonged to Deputy Prime Minister Dmitry Rogozin, a little less than a month ago, the concern had already received official registration. At the same time, the legendary Russian gunsmith designer Mikhail Kalashnikov donated to the new concern the right to use his name.

On Wednesday, September 18, Russian President Vladimir Putin paid a business visit to Izhevsk, who personally visited Mikhail Kalashnikov at his home. The creator of the most common weapons on the planet recently suffered a disease, so the meeting was held at home. Kalashnikov himself at the plant in recent times is becoming less common, but the whole plant and the city are first personified with his name. Kalashnikov assault rifles of various series have been manufactured in Izhevsk for more than 60 for more than a few years, and the demand for them has always been high. 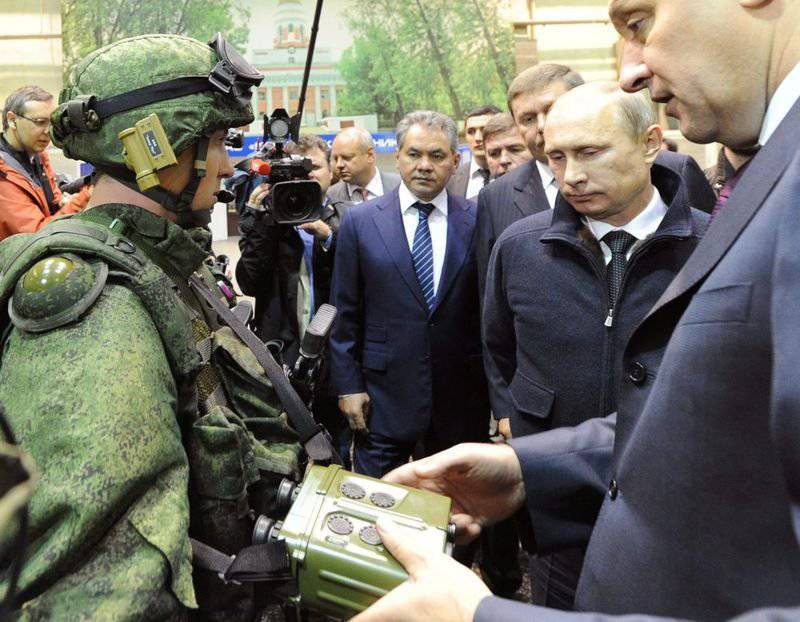 From Kalashnikov, Vladimir Putin went to the Izhmash plant, where he personally examined samples of new small arms. He picked up the gun Yarygina, twitched the bolt. Of particular interest to Vladimir Putin was a new set of military equipment called the “Warrior”. The equipment was shown to the president here in the workshops of the plant. True, it was not military men who had to dress in it, but civilian specialists — engineers who were engaged in designing modern weapons.

As Vladimir Putin explained, the “Warrior” kit includes an ammunition for members of an efficient group — the squad commander, sniper, reconnaissance infantryman. In addition, each of them has its own special function, as well as special weapons. For example, a special display is built into the commander's equipment, which displays the actions of all his subordinates. "Warrior" - is a modern military equipment of military personnel, which is also called the equipment of the soldier of the future. This set of equipment combines a set of modern personal protective equipment of a soldier, weapons and ammunition, means of communication.

As the President stressed at a meeting in Izhevsk, modern weapons should be produced in modern enterprises. Today, at Izhmash, you can still find old machines, after using which parts have to be handled in the old manner by hand, while next to them you can also find the most modern equipment. Therefore, the plant was included in the federal targeted program for the modernization of defense enterprises. 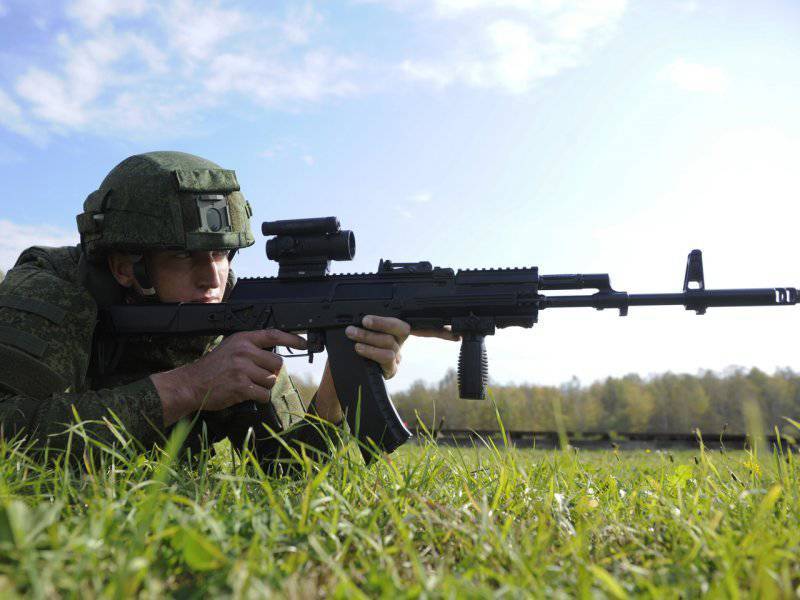 The Kalashnikov Concern will unite all the leading arms enterprises of the country, so that very soon the new domestic developments will become famous in the same way as the legendary AK did. The new AK-12 still guesses the features of the world-famous AK-47, but this machine is of a completely different generation. Work on the world's first self-loading carbine with balanced automatics was started at Izhmash, but the Kalashnikov concern will already be releasing the new product. It is reported that the new military AK-12 Russian military will begin to receive in 2014 year.

Increased accuracy of fire, comfortable ergonomics, traditionally high reliability at work - all this distinguishes the AK-12. The machine of the fifth generation is currently undergoing state testing. At present, there are enough new small arms in Russia that have just emerged or are preparing to come out from test benches, but sometimes it can take several years to go from a prototype to a mass-produced product. This time could be reduced by adjusting the structure of the entire Russian arms industry.

The Kalashnikov Concern, which is a vertically integrated structure, was created, among other things, for this purpose. The new Russian arms concern will produce everything - from a bullet to a machine gun, while applying unique scientific and design experience. Konstantin Busygin, general director of Kalashnikov Concern OJSC, noted that: “Firstly, it will be the largest design bureau in Russia, that is, all the best minds of small arms manufacturers will be gathered in one place. There is a necessary production base, if we have our own cartridge production, and we have already obtained a license for this, then everything will be ready. We will be able to complete the cycle from the receipt of the order to loading into the cars. ” 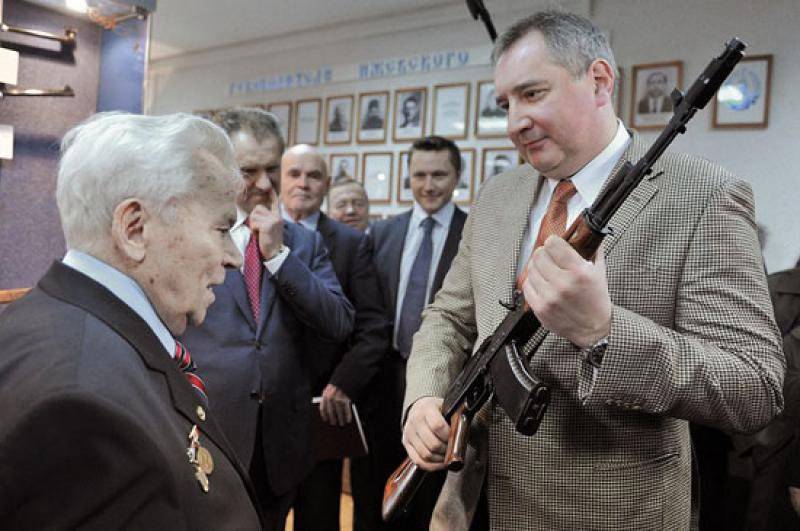 The chief managers of the new concern are counting on the merger process to distribute the work among all the enterprises under its wing. Today, enterprises belonging to the Kalashnikov concern are producing similar models of military and sporting, hunting and civilian weapons. Therefore, we expect to build a single product line and want to specialize enterprises more narrowly, depending on the level of development of technologies and production used in a particular production. For example, Izhmeh has always been distinguished by exact casting - there it is planned to further develop this area. Production of high-quality barrels that meet all the requirements of modern production, it is planned to leave on the basis of the former "Izhmash" and so on, the deputy general director of the Kalashnikov concern told reporters.

At present, the Kalashnikov concern has already included 2, the largest Russian enterprises in the industry, and in the future, Kalashnikov is ready to conquer foreign sales markets and open joint ventures with foreign partners. Another new focus is precision weapons. The Kalashnikov Concern will be engaged in its development together with the Izhevsk Mechanical Plant (Izhmekh), which also became part of the holding. Almost immediately, the company received a very large order from the Ministry of Defense of the Russian Federation. We are talking about the Whirlwind anti-tank missiles, which are planning to load the capacity of the enterprise before the 2015 year, specifically for this, the plant has already announced a competition to open 300 new vacancies immediately.

It is with the formation of the Kalashnikov concern that they are counting on further development in the domestic pistol industry, so 4 new Russian developments have already been launched in the line. Gunsmith designer Vladimir Yarygin admits that the AK is a true legend, and I hope that our new pistol will also live a very long life. The first batch of products, which will be produced under the Kalashnikov label, will be shipped to customers by the end of 2013, and by the beginning of 2014, another symbol of the beginning of a new era will have to appear on the embankment next to the enterprise. stories famous Izhevsk company - the chapel of the Holy Great Martyr Catherine, who is the patroness of gunsmiths from the capital of Udmurtia. 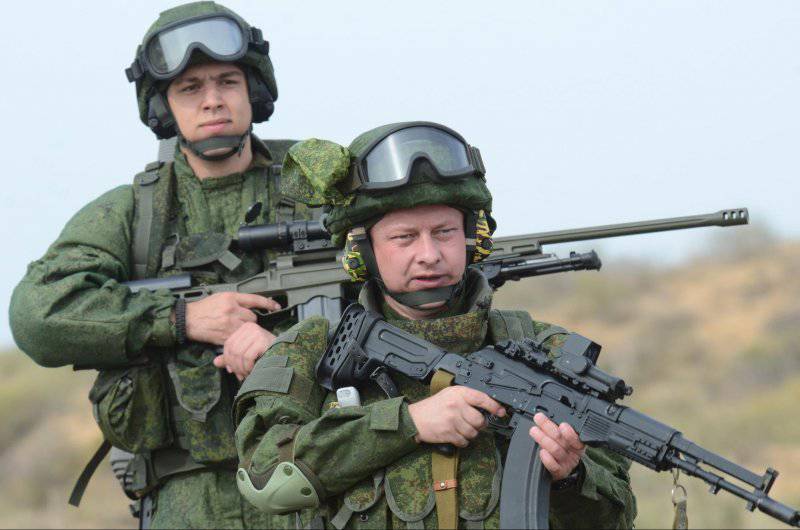 The Kalashnikov Concern will unite the Izhmash Research and Production Association, the Izhevsk Mechanical Plant, the Design Bureau of automated lines for them. L.N. Koshkina (Klimovsk), Vyatsko-Polyansky Machine-Building Plant “Molot”, as well as NITI “Progress” (Izhevsk). To date, these companies produce a total of 95% of Russian small arms, ammunition, as well as equipment designed for the production and disposal of ammunition. The plans of the new concern and the creation of a separate plant, which would be engaged in the release of high-precision weapons systems.

The plans for creating such an enterprise are reported in the materials for the meeting on state defense orders, which took place on September 18 in Izhevsk. The new plant, which will also be part of the concern, will have to focus on the production of high-precision weapons systems, which include Kitolov-2M, Krasnopol artillery shells, as well as Vikhr guided and unguided missiles aviation S-13 and S-8 missiles. Also here it is planned to assemble the Pantsir-C1 air defense missile defense complex, the units and blocks of the Gran mortar complex. As you know, the first defense order in this direction has already been received. In July 2013, the enterprise was recognized as the winner of the contest of the Russian Ministry of Defense for the production of Vikhr-1 guided missiles.

According to the results of 1 for the first half of 2013, the Kalashnikov concern's sales revenue amounted to almost 900 million rubles (891,2 million rubles). At the same time, the share of military products was 48%. In the production structure, civilian small arms had - 30%, military weapons - 21%, licensed production - 14%, production of repair and maintenance tools - 10%, aircraft guns - 8%, tools and machine tools - 3%, other directions - 14%. 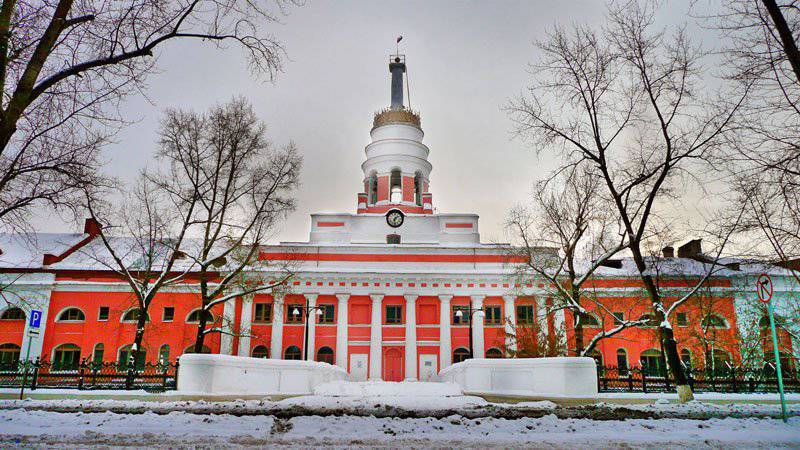 At the same time, the company notes that the demand for products today in 2-3 times exceeds the capacity of existing production, and the enterprise itself is waiting for technical re-equipment. “For this purpose, Kalashnikov plans to take part in the federal targeted program for the modernization of defense industry enterprises. The project provides for the modernization of production and the purchase of new equipment for a total amount of 1,85 billion rubles.

Concern "Kalashnikov" is today the largest Russian manufacturer of automatic combat and sniper weapons, guided artillery shells, as well as a fairly large range of civilian products - sports rifles, hunting rifles, tools and machine tools. The company was founded in 1807 year. Nowadays, Izhmash products are shipped to 27 countries of the world, including the USA, Germany, Great Britain, Italy, Norway, Canada, Kazakhstan and Thailand.

Ctrl Enter
Noticed oshЫbku Highlight text and press. Ctrl + Enter
We are
Concern "Kalashnikov" modernizes production and expands the range of productsDeputy Prime Minister of the Russian Federation: In the 1990 and 2000 years the potential of the military-industrial complex was robbed
Military Reviewin Yandex News
Military Reviewin Google News
69 comments
Information
Dear reader, to leave comments on the publication, you must to register.