19 September 2013
21
The SCO summit in Bishkek recently ended. No collective "breakthrough" decisions (for example, on financing joint investment projects) were made on it. Analysts agree that the Shanghai Cooperation Organization represents something like the arena of rivalry between China and Russia. The remaining members of the SCO play the role of extras or generally act as spectators. 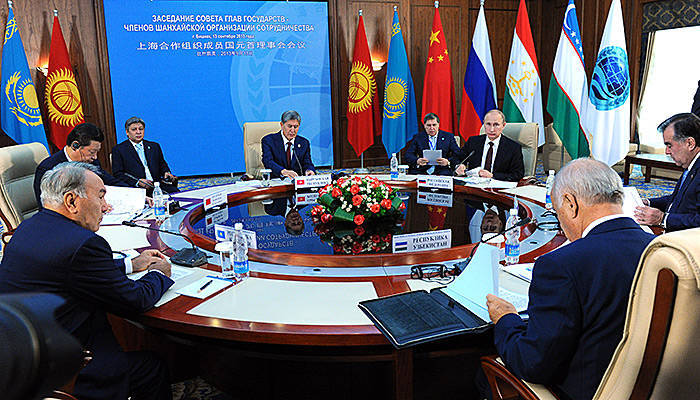 On the eve of the Bishkek meeting, analyst Tamerlan Ibraimov expressed the opinion that the dynamics of this organization are set only by Russia and China. The expert was interviewed by Azamat Tynaev (Radio "Azattyk"). To the question of why Kyrgyzstan participates in the SCO, Ibraimov answered:

“This is due to the fact that the direction and dynamics of the activities of the SCO are set only by two countries - Russia and, to an even greater extent, China, and their priorities are of a different nature. First of all, it is the involvement of neighboring countries in the orbit of its influence. Kyrgyzstan is not a significant player in this game, which, in fact, is good for us. ”

As Pavel Tarasenko writes (Kommersant), in general, the results of the summit are reduced to the adoption of the final declaration. The summit participants reiterated that in the twelve years of its existence, the SCO was able to become “an effective organization whose experience allows us to respond to challenges and threats.” This very thesis, notes journalist, the leaders of the organization (Russia, Kazakhstan, China, Tajikistan, Uzbekistan) and observers (Afghanistan, India, Iran, Mongolia, Pakistan) set out to prove the final declaration, which supported the idea of ​​holding a conference "Geneva-2" and the Russian initiative to transfer Syrian chemical weapons under international control.

But the decision on the mechanism of financing joint investment projects was not taken. China’s idea of ​​creating the SCO Development Bank in Moscow does not arouse enthusiasm.

It was not announced about joining the organization as a full member of Iran.

And one expert spoke about the symbolic purpose of the SCO. Alexander Karavaev, deputy general director of the Center for the Study of the Post-Soviet Space of Moscow State University, said:

“The SCO and other similar associations play a largely symbolic role. At such venues, world leaders are trying to sidestep all controversial issues and with the help of some non-conflicting topics to pretend that collective equal interaction is possible. ”

That is, we add, it turns out something like a postmodern game. A sort of geopolitical and geo-economic simulacrum.

Moreover, it seems to be true, according to the same expert, “it’s difficult to talk about real equality,” since Russia and China “are trying to drag the blanket over themselves.”

As for Syria, then, as noted by Kabai Karabekov and Olga Kuznetsova (Kommersant), in the Bishkek Declaration adopted after the meeting, the leaders of the member states supported Russia's position on foreign policy issues.

The document states that Member States “support the initiative to transfer chemical weapons under international control with its subsequent destruction and the accession of Syria to the Convention on the Prohibition of the Development, Production, Stockpiling and Use of Chemical Weapons and on Their Destruction. "

Regarding Iran, the clause was also approved: "Threats of the use of military force and unilateral sanctions measures by individual states against this country are unacceptable."

Experts say that the meeting held in Bishkek was Moscow’s attempt to “recoup” in the Syrian issue for the G8 and G20 summits.

Andrey Polunin ("Free press") recalls that at the G8 meeting in June, Russia was in the minority, and Vladimir Putin had to make enormous efforts to achieve a compromise communique on Syria. On G20, the voices were divided almost equally: supporters and opponents of the US military operation in Syria remained unconvinced. The current summit, according to the author, looks like a new round of confrontation between the East (Russia + China) and the West (US + NATO).

Vice-President of the Center for Political Technologies, Alexei Makarkin, says:

“The SCO is a platform that exists to block the arrival of Western players in Central Asia. Neither Russia nor China wants the Americans to come to this territory. For example, now Russia, together with Kyrgyzstan, is seeking US withdrawal from this country - and they have succeeded in this. ”

True, Russia and China in Central Asia are not only partners, but also competitors. The Chinese go to domination through the economy, the expert believes. In the future, the economic presence is converted into increased political influence. Therefore, the SCO, the analyst notes, is also a platform for settling Russian-Chinese differences. At the same time, in politics, Russia and China occupy close positions on the situation around Syria. But there are aspects that distinguish the position: Russia has direct interests in Syria, and China does not; he just does not want US domination in the world. Therefore, China would not have alone to block the UN Security Council resolution on Syria, the expert believes.

Professor, Deputy Director of the Institute of Far Eastern Studies of the Russian Academy of Sciences Andrei Ostrovsky says:

“Within the framework of the SCO, Russia has problems in international economic relations. They relate primarily to China. Our economy does not reach the Chinese, so the volume of foreign trade with China is very modest. The state of the Russian economy has a fundamental impact on the structure of exports of our goods. If mechanical engineering prevailed in our 15 years ago, today its share was reduced to 1%. We are actually trading with China only raw materials - mainly energy. All the recent Russian deals with the PRC - the largest and most significant - go either for oil or for gas. The latest agreement of this kind was recently signed by NOVATEK and China China Petroleum and Chemical Corporation on gas drilling on the Yamal Peninsula. ”

It turns out that the Russian Federation exports energy resources to the PRC, and receives products from Chinese engineering. The picture is similar in other countries of the SCO, the expert notes. They send metals and energy resources to China, and in exchange for them are consumer goods.

As for the SCO bank, “the matter does not move from the dead end”. The problem, the analyst explains, is that Russia does not want China to dominate. What to do? To talk with China on an equal footing, the professor explains, Russia should develop the domestic economy. Otherwise, "no summits will help."

Andrei Ostrovsky spoke on the Syrian issue - from the “Chinese” point of view.

China is not interested in exacerbating the situation around Syria, including because tension in the Middle East raises energy prices.

“Namely, China is the main world exporter of oil and gas; therefore, it suffers more than others from this situation economically. It is not in the interests of China to fan the war in Syria, and its joint position with Russia is quite logical. "

That is, in addition to political interest, we add from ourselves, aimed at eliminating US domination in the world, there is also an economic interest, albeit not a direct one.

Other experts directly point to China as the “first among equals” in the SCO.

The Shanghai Cooperation Organization, unlike NATO or the CSTO, does not have a leader, and if you ask yourself who is first among equals in the SCO, then it will not be Russia, but China, the website says "BBC".

“The reason lies on the surface: the Chinese have money. They are ready to invest tens of billions of dollars in the former Soviet republics of Central Asia, including three billion in Kyrgyzstan’s host summit. ”

Moreover, experts doubt that Moscow will be able to increase its influence in the SCO against the background of the Syrian situation.

Nina Mamedova, director of the Center for Iranian Studies at the Institute of Oriental Studies of the Russian Academy of Sciences, told BBC Russian Service:

“The situation is favorable, but transitory. Syria will pass, but the economy will remain. China’s financial expansion is obvious, and Russia is not able to resist it. ”

The transformation of the SCO in the "anti-NATO", some analysts also do not predict, according to the material "BBC". The first reason is the heterogeneity of the composition of participants. The organization in the status of a dialogue partner is Turkey, and this country recently supported the idea of ​​a military operation against Damascus. The second factor is the Chinese position.

"Russia wants the SCO to be more involved in political issues, and China is doing everything to concentrate on the economy, that is, on what it is stronger, and successfully carries out its agenda."

“The SCO was created as an economic organization, and if it paid attention to security problems, it was not in a global way, but in terms of combating regional extremism and drug trafficking. There is no reason to believe that this trend will change. ”

It is interesting to add on our own that in some sense “some anti-NATO” in the SCO are seen by some large Western politicians.

Love Lyulko (Pravda.ru) indicates that it was on the day of the summit that the French President Hollande gathered in Paris the foreign ministers of Saudi Arabia, the UAE and Jordan and agreed with them to strengthen the Syrian opposition in the fight against Assad.

Thus, at present, the SCO participants have clearly defined their position on the Syrian issue, the exact opposite of the position taken by the western “hawks” and their backstage masters - the military industrialists. Restraining the aggressor - and this is what most diverse political experts agree on - largely depends on Russia, and not on China, which has no direct interests in Syria. Therefore, it should be noted, for Russia, Syria turned out to be a “platform” for strengthening regional authority in the SCO. But chemical weapons are one thing, and ending the civil war in Syria is another. Western and Arab aggressors will not retreat from their plans ...