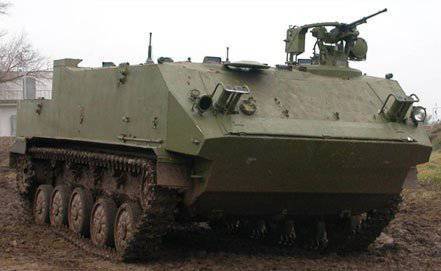 In particular, the exhibition will host the premiere of the promising armored personnel carrier BTR-MDM, on the basis of which a family of vehicles for the airborne forces will be created in the near future.

Another premiere of this year is the 125mm SPTR 2S25 Sprut-SD self-propelled anti-tank gun. The decision to create a new gun mount was made by Deputy Minister of Defense Yuri Borisov in February 2013 at a meeting on the development of the Airborne Forces. Self-propelled guns with 125 mm tank cannon can be dropped from an airplane without a platform. Instead of a 100-mm cannon, a 4-mm tank artillery system 125A2M-46 will be installed on the BMD-5 chassis, which, in particular, is equipped with T-90 tanks. The new machine has a length of just over 7 m and a mass of about 18 tons (a conventional tank weighs more than 40 tons), which makes it possible to transport it by IL-76 aircraft and Mi-26 helicopters.

Thanks to the BMD-4 chassis, the new gun mount will be able to overcome the rise to 35 hail. and move on the water. The 2А46М-5 can fire new armor-piercing shells, including Lead shells, capable of penetrating the armor of American Abrams and Israeli Merkava tanks, as well as anti-tank missiles.

The exposition of the Tractor Plants will also include a presentation of innovative protection systems for tanks, light armored vehicles and personnel.

In the form of booklets, video and photographic materials, the concern’s enterprises will present the BMP-3М, BMP-2М, BREM-L, tracked chassis for the C-300В anti-aircraft missile systems, as well as a promising line of armored vehicles for the Airborne Forces, including the BMD-4M.

Full-scale samples of the latest developments for the Ground Forces and the Airborne Forces - BMP-3М, BTR-MDM, BMD-4M and SPTP 2С25 "Sprut-SD" - you can look at the static exposure. They will also take part in demonstration presentations on the range track, during which it is planned to demonstrate in real conditions the use of a completely new tactical-level combat control system developed specifically for the rapid reaction forces.

At present, a comprehensive plan for the modernization of special-purpose products is being implemented at the enterprises of Tractor Plants. Work on the development of innovative devices and systems are carried out in close relationship with the Ministry of Defense of the Russian Federation. A lot of innovative directions are being worked out, connected with the use of the latest materials and technologies, as well as with the installation of advanced systems and units for military purposes on machines - sights, combat modules and more.

"Participation in the exhibition is a great opportunity to show the scientific and innovative potential of the machine-building-industrial group Concern Tractor Plants," says its first vice president, Albert Bakov. - Visitors to the exhibition will see not only certain types of military equipment, but also its interaction with each other. According to the organizers of the event, it is planned to play a real combat battle, in which our armored vehicles, various types of infantry will be involved. weapons, combat helicopters and even fighter-bombers. "