18 September 2013
31
At the recent exhibition of weapons and military equipment DSEI-2013, held in London, it was shown several new armored vehicles for various purposes. For example, the French company NEXTER Systems brought its new development called TITUS to the exhibition. The design of this machine has been applied several interesting solutions and, as expected, it will be able to interest a foreign customer. The company-developer pays special attention to possible orders from third countries. This is due to the fact that the TITUS machine was originally designed for export deliveries. 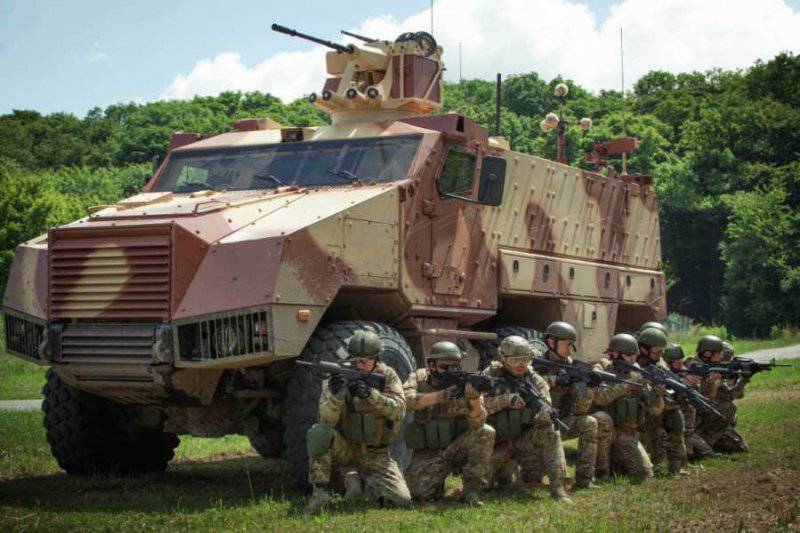 The name of the new armored vehicle continues a peculiar tradition, begun by the “name” of the CAESAR project, and constitutes the backronym. TITUS stands for Tactical Infantry Transport and Utility System ("Tactical Infantry Transport and Auxiliary System"). The technical appearance of the TITUS is such that it can be found features of two classes of armored vehicles at once. Seeing the features of recent local conflicts, the French engineers applied in the new project some of the solutions inherent in MRAP-class machines. At the same time they took into account the shortcomings of the equipment, resistant to mines and protected from ambushes. To ensure sufficient mobility and maneuverability, the TITUS vehicle has some of the characteristic features of a “classic” wheeled armored personnel carrier.

As the basis for the MRP TITUS armored personnel carrier, the designers of NEXTER Systems chose a three-axle all-wheel drive chassis developed by the Czech company Tatra. The main feature of this chassis is the special design of the frame, on which all the units are assembled, and an interesting arrangement of wheels, which is extremely rare in today's armored vehicles, but characteristic of armored personnel carriers. The middle axis is located in the middle of the machine, and not with a backward shift. Due to this, the weight of the structure is evenly distributed over all six wheels, without focusing on the rear axles. Such a distribution of the mass of the machine has a beneficial effect on its patency.

Proper placement of the wheels relative to the centers of gravity of the various units of the machine in the case of the TITUS armored car is a very important thing, because it has a fairly large weight. In the basic configuration, the weight of an empty machine reaches 17 tons. The payload is up to 4 tons. When installing additional booking modules, the mass of the empty armored car increases by six tons relative to the base version. Thus, the maximum combat weight of the machine TITUS can reach 27 tons. With such weight parameters, the car turned out to be quite compact: the length of the 7,55 meter, the width of the 2,55 meter and the height of the roof of the 2,73 meter. 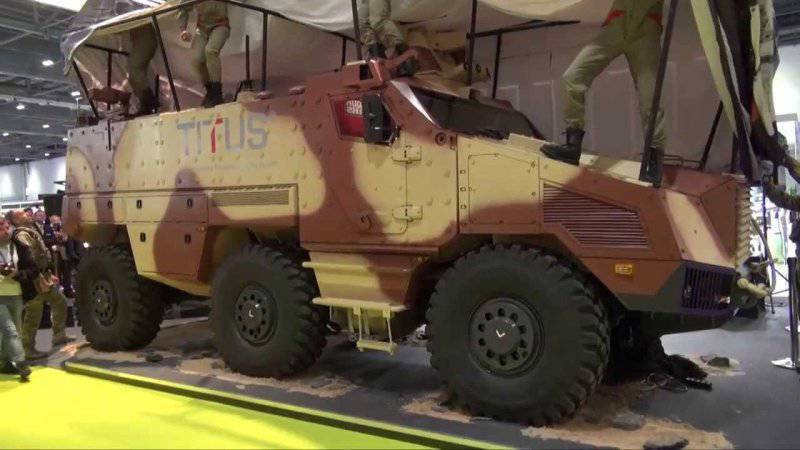 In the basic version of the armored personnel carrier-MRAP TITUS equipped with a six-cylinder diesel engine company Cummins 440 horsepower. As stated in the official information about the project, at the request of the customer the machine can be equipped with a more powerful engine. Alternative 550-strong diesel is able to significantly improve the driving characteristics of the armored car. In both cases, the engine is associated with an automatic transmission company Allison. Such a power plant allows the armored vehicle to accelerate on the highway to a speed of 110 km / h. One gas station is enough to overcome 700 kilometers.

As can be seen from the relatively high body, the TITUS is equipped with a "mine bottom" V-shaped. The anti-mine protection of the armored car is made in accordance with the requirements of the 4a and 4b levels of the NATO standard STANAG 4569. This means that TITUS can protect the crew and the landing force against an explosive device with a charge of 10 kg of TNT that has worked under the wheel or bottom. The basic protection of the armored hull corresponds to the NATO standard 2, which allows the crew and the soldiers being transported not to be afraid of the armor-piercing bullets of 7,62xXNNUMX cartridges. When additional booking modules are installed, the TITUS vehicle is protected from bullets of a caliber 39 millimeter.

Of particular interest are other additional protection systems. At the request of the customer, the TITUS armored personnel carrier-MRAP can be equipped with a PG Guard system designed to protect against reactive anti-tank grenades. Also developed a set of tools called SAFEPRO. As stated in the promotional materials produced by NEXTER Systems, the installation of this kit allows the armored vehicle to withstand an explosion of a charge of up to 150 kg. At what distance from the car an explosion should occur and how exactly such a high level of protection is ensured, it was not announced. 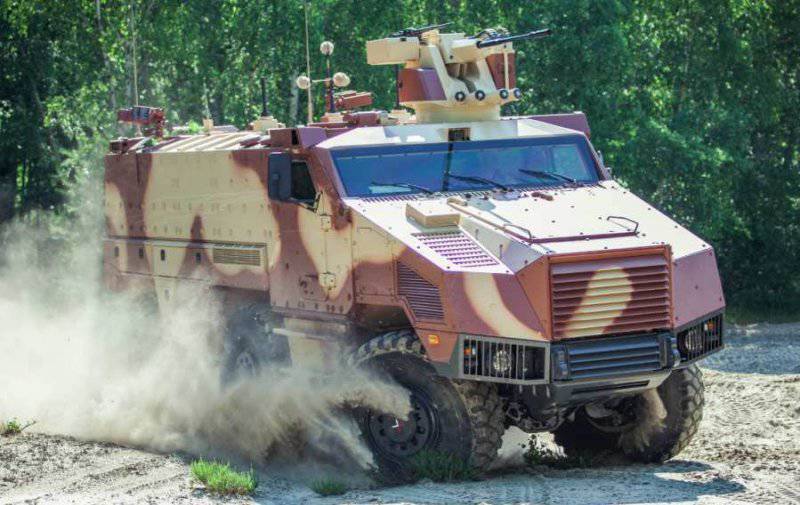 Inhabited compartments of the TITUS (cab and troop compartment) have a total volume of more than 14 cube. meters Own crew of an armored car consists of three people. Ten fighters with equipment can be accommodated in the troop compartment. The crew and assault forces are located in chairs absorbing some of the energy of the explosion of the mine.

The back of the armored car body is made on a modular system. This means that instead of a cockpit for the landing, TITUS can carry a cargo platform, necessary equipment, etc. In the basic version of armored vehicles for soldiers, the armored car is equipped with additional volumes to accommodate small cargoes (ammunition, etc.). Special boxes on the sides of the case have a total volume of 4 cube. meter

The first prototype of the TITUS machine appearing in promotional materials carries the remote-controlled NEXTER ARX20 combat module. The armament of this module consists of an 20-millimeter automatic cannon and a machine gun of the caliber 7,62 mm paired with it. In addition, there are four smoke grenade launchers on the module. The combat module is located on the roof of the armored car, above the crew cabin. If necessary, any suitable combat module with weapons and electronic systems that meet the requirements of the customer can be installed on the existing epaulettes. Thanks to this machine TITUS can carry machine guns, including large-caliber, automatic guns and automatic grenade launchers of various models.

In the rear of the armored hull, on the upper corners of the module for the transport of troops, there are two turrets for mounting machine guns. Management of these turrets, as in the case of the main combat modules, is from the inside of the armored corps.

The armored personnel carrier with the features of the MRIT model TITUS so far exists in only one instance. A single armored vehicle is used to test various systems and is demonstrated at trade shows. NEXTER Systems has created TITUS primarily for sale to third countries. In the line of its products offered for export, this armored car occupies an intermediate position between the “full-fledged” machine of the MRAP Aravis class and the “classic” armored personnel carrier VBCI. The company-developer is not yet engaged in the deployment of mass production of the new machine, but it is alleged that in the case of incoming orders, the construction of the first armored cars will begin in the 2015 year.

Contracts for the supply of armored vehicles TITUS have not been signed yet and at the present time, most likely, they are not even planned yet. In view of the recent demonstration of a promising French armored car, potential customers probably have not had time to obtain the desired amount of information and consider the need to purchase this equipment. Thus, if the TITUS machine is of interest to anyone, then the contract will be signed only in a few months. Given the promises of NEXTER Systems regarding the timing of the start of mass production, it can be assumed that the first buyers from third countries will receive their armored vehicles only after a few years.