19 September 2013
30
China is expanding its expansion into Russia and Central Asia. Together with Russia, the “dragon” has recently been implementing dozens of projects in various areas. The success of bilateral cooperation was marked by Xi Jinping and Vladimir Putin at the G20 summit. In addition, analysts believe that it is Russia and China that are driving the development of the Shanghai Cooperation Organization. Meanwhile, the expansion of the PRC to Central Asia is growing. 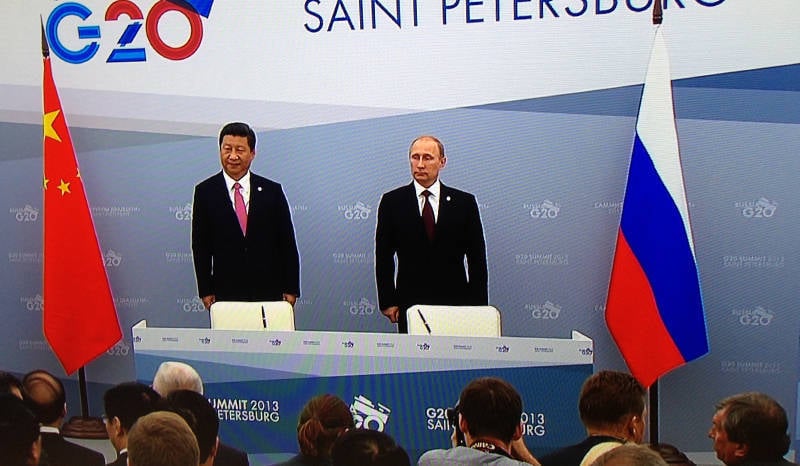 The President of Russia positively assessed the development of Russian-Chinese relations. He said this at a meeting with the chairman of the PRC. Xi Jinping noted that the parties had achieved a “serious breakthrough” in fifty joint projects in sixteen directions. Following the negotiations, the companies of the Russian Federation and the People's Republic of China signed a number of agreements in the oil and gas sector, "Voice of Russia".

“I am very pleased with the new opportunity to see you,” said V. Putin to the Chinese leader, and Xi Jinping thanked the Russian president for inviting me, calling him his “best friend.”

It became known about future projects. The head of Rosneft, Igor Sechin, said that the company plans to sign agreements with CNPC related to the expansion of cooperation by the end of this year.

In an interview with CCTV, which leads "InoTV", Russian Deputy Prime Minister Arkady Dvorkovich said that China and Russia complement each other:

“… For the most part, we complement each other, and this is a good basis for interaction in the energy industry, the innovation industry, in the field of security and in finance. <…>

In essence, by providing energy to China, we are contributing to growth in both Russia and China, which is good. Declaring the same position at the UN Security Council, as I believe, we contribute to international security, and this is good. So I think this cooperation is based on both common aspirations and pragmatic interests. ”

Before the SCO summit in Bishkek, analyst Tamerlan Ibraimov suggested that the dynamics of this organization are set only by Russia and China. The expert was interviewed by Azamat Tynaev (Radio "Azattyk"). When asked why Kyrgyzstan participated in the SCO, Ibraimov answered:

“This is due to the fact that the direction and dynamics of the activities of the SCO are set only by two countries - Russia and, to an even greater extent, China, and their priorities are of a different nature. First of all, it is the involvement of neighboring countries in the orbit of its influence. Kyrgyzstan is not a significant player in this game, which, in fact, is good for us. ”

Regarding Kyrgyzstan, the analyst points to Chinese assistance and lists: an oil refinery, power lines, a gas pipeline, an alternative North-South road, and other projects. At the same time, the analyst says, whatever may be said about Chinese expansion, “if someone is willing to invest in our infrastructure and industry, you should use this opportunity.” Trampling on the spot and refusal of modernization projects are much more dangerous, the expert believes.

Recently, Xi Jinping made a ten-day visit to the countries of Central Asia. The Deputy Minister of Foreign Affairs of the PRC, Cheng Guoping, reported on the outcome of the visits of the PRC Chairman to Kazakhstan, Kyrgyzstan, Uzbekistan and Turkmenistan, as well as Xi Jinping's participation in the Bishkek Summit of the Shanghai Cooperation Organization, reports cri.cn.

Cheng Guoping called the visits of the PRC Chairman Xi Jinping to four Central Asian countries and participation in the SCO summit in Bishkek “an overseas trip of historical significance.”

During the visits, Cheng Guoping noted, China’s policy towards Central Asia was comprehensively outlined, and “significant progress” was achieved in energy cooperation.

After the completion of the SCO summit in Bishkek, Cheng Guoping said, the Chinese side, together with other SCO participants, will implement "all the consensus reached by the heads of state." Also, the Deputy Minister of Foreign Affairs said that China would provide all-round support to Tajikistan, which presides over the SCO.

In this context, it is interesting that, as indicated by the portal china.org.cnThe importance of China’s position on Central Asia, stated by Xi Jinping, lies in the fact that the Celestial Empire does not claim to "dominate regional affairs and emphasize the sphere of influence in Central Asia."

As the professor at the Institute of International Relations of the Chinese People’s University Shi Yinhong emphasized, China has achieved dynamic development with regard to diplomacy and the economy in the region, and in order to maintain friendly relations with local states, China should continue to “adhere to modesty and prudence to clearly declare that there are no domination in regional affairs and the allocation of spheres of influence ".

Some experts noted that Central Asia has rich resources. In addition, the region has a geopolitical advantage - because of which it can become an object of competition for major powers. If China moves its strategic center to Central Asia, complex relationships can exacerbate local instability.

However, according to Chinese analysts, the performance of Comrade Xi Jinping on September 7 dispersed the clouds. The diplomatic position of China in Central Asia is as follows: through business cooperation to jointly develop China and Central Asia, contributing to the stability of the latter. In addition, China does not want to turn Central Asia into a testing ground for the "intrigue of powers."

The material further states that the Secretary of the SCO China Research Center, Chen Yurong, noted that Xi Jinping’s speech was aimed at China’s economic cooperation with the countries of Central Asia.

As Igor Rotar reminds (Rosbalt), the trade turnover of the five countries of Central Asia with China today is more than 23 billion euros, which is 2 billion euros more than the same indicator of trade with European countries. The PRC exports more than 10% of oil and gas from this region. For example, Kazakhstan supplies a quarter of its oil to China. Therefore, many experts suggest that the countries of Central Asia will be fully under the influence of Beijing in the future. Large-scale investments in the region of the Middle Kingdom, the analyst notes, are the most real in Kazakhstan and Turkmenistan.

At the end of the review, it is necessary to say about lending to China and Russia within the framework of the BRICS.

The volume of international loans in emerging markets in the first quarter of 2013, compared to the fourth quarter of 2012, increased by $ 267 billion and amounted to 3,4 trillion. dollars Growth for the quarter - 8,4%. As for the volume of interbank loans, they increased even more: by about 200 billion dollars, or by 12%. 85% growth provided loans to China, Brazil and Russia. This record statistics made public by the Bank for International Settlements.

In China, the volume of loans issued by foreign banks increased in the first quarter by 160 billion dollars, or by 31%. In Russia, growth was 18% (29 billion.).

Thus, early Western investors buried BRICS, and also prematurely wrote off China (which is periodically predicted almost an economic catastrophe, unless the Celestial advances to the mind and doesn’t do something completely liberal from its economy, in full compliance with the International Monetary Fund stock). As for the expansion of China into Central Asia, the dragon is known to be a cunning creature. Friendship is friendship, and money apart ...