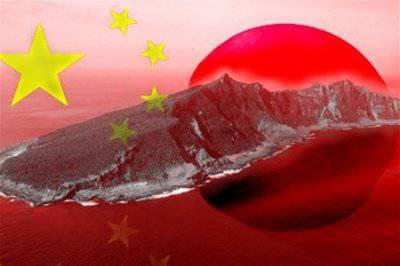 Last Monday, two Chinese military frigates passed a hundred kilometers from the Senkaku Islands (they are Diaoyu Dao), the same ones that visited the area in August. The zone of the islands on the same day circled the UAV. On Tuesday morning, seven PRC patrol ships appeared at once near Senkak. Later he came up to the eighth. In the press, such a “call” of the maritime police was called the “most widespread”. Japan found the answer: it announced its intention to deploy state employees on Senkaku. And on Saturday, four ships of the Naval Forces of the Celestial Empire again visited the waters of the disputed islands.


As Maxim Makarychev writes ("Russian newspaper"), Tokyo expressed a protest to China in connection with the appearance of patrol ships in the area of ​​disputed islands. Also, a representative of the Japanese government said that Japan "could establish a small station on the islands, where a certain number of civil servants would work in order to protect their sovereignty." The Secretary General of the Cabinet Yoshide Suga expressed "deep regret" at the fact that the Chinese ships repeatedly entered "the territorial waters of Japan."

Exactly one year ago, the Japanese government bought three islands from a private owner. Exchange of "gifts" came to the day of the nationalization of the disputed islands. Relations between Beijing and Tokyo are experiencing the peak of the "ice age", said Viktor Fedorov ("Voice of Russia"), precisely because of the island dispute.

And the ice did not melt 5 September at the G20 summit in St. Petersburg, where they met the Chairman of the PRC Xi Jinping and Prime Minister Shinzo Abe.

Valery Kistanov, an expert at the Institute of Far Eastern Studies of the Russian Academy of Sciences, says:

“Both countries are building up their armed forces, competing in an arms race. China is building aircraft carriers, Japan is building helicopter carriers, which can potentially be converted into aircraft carriers. Japan this year is going to review the main directions of defense policy and pacifist articles of the constitution, taking into account the so-called Chinese threat. Recently, white books on defense were published in China and Japan. The parties accuse each other of illegal actions around these uninhabited islands. China accuses Japan of capturing them illegally. Japan accuses China of sending ships to these islands and even to its territorial waters. Tokyo does not recognize this dispute at all. ”

In both China and Japan, the Voice of Russia correspondent notes that the conflict dish is thickly seasoned with a nationalism sauce. According to the latest sociological survey, about 93% of Japanese have a negative attitude towards China; they are reciprocated by 90% of Chinese. At the same time, the number of Chinese dissatisfied with the situation in the East China Sea doubled in a year, reaching 80%. More than a third of the Chinese people believe that in the future the two countries will face an armed conflict.

The “birthday” of the conflict was full of surprises.

According to Oleg Kiryanov ("Russian newspaper" September 13), Prime Minister of Japan Shinzo Abe said that he would react decisively to “any provocations” of China and promised to strengthen the country's armed forces. Abe made such a sharp statement during a visit to one of the military units. The Minister of Defense, who accompanied the head of the government, reminded that China is increasing its military potential at sea. The minister promised to strengthen Tokyo’s information-gathering and defense capabilities.

Followed the answer from China.

On the same day, Foreign Ministry spokesman Hong Lei made a statement. "By historical The reasons for Japan’s policy and security concepts are constantly attracting the attention of neighboring countries. We hope that the Japanese side will adhere to a peaceful path of development and contribute to maintaining peace in the region and the world. You should not use prepositions to change military strategy, ”he quotes his words. correspondent ITAR-TASS Alexey Selishchev.

In the material of Gleb Kostarev (RBC) from 16 September, among other things, states that Japanese companies are reducing investment in China and withdrawing production capacity from there. The reason for all this is not only the rise in price of the Chinese labor force, but also the aggravation of bilateral political relations over the islands. Japanese business switches to Indonesia, Philippines, Myanmar, Vietnam.

“Japanese investments in Southeast Asia increased by 55% in the first half of this year, to 10,29 billion. In particular, investment in the Philippines grew by 80%, Vietnam - 34%, and Indonesia - 19%. At the same time, the inflow of Japanese capital to China fell by 31%, to 4,93 billion dollars, according to data from the Organization for the Promotion of Foreign Trade of Japan. ”

Cited as an example the company "Showa", supplying components for "Toyota" and "Nintendo". It will open the first factory abroad, not in China, but in Thailand.

“Until recently, I asked myself whether China would not be a better choice, because it is a larger market, and our customers have many more factories there. However, in the end, I decided to go where people love you, not hate you, ”said Kazumas Hirano, President of the Wall Street Journal.

As G. Kostarev notes further, Japanese firms find the growing market of the countries of Southeast Asia attractive. There increases the proportion of the middle class. For example, Honda started construction of a new plant in Thailand in August, and Toyota a month earlier in July announced that 230 million would be invested in a company in Indonesia.

Lenin once wrote that "politics is the most concentrated expression of the economy" and that "politics cannot but take precedence over economics." If this is true of the Land of the Rising Sun and the Celestial Empire, then the economists of the two countries should closely tackle the question: what is preferable and what is more profitable: to keep investment and cooperation, or to start a war for oil off the islands. After all, it is already clear that neither of the two sides intend to concede the islands, nor share the wealth in their waters. Two states observe economic disadvantages instead of pluses: after all, both the Chinese and the Japanese have moved from “love” to “hate”.

Observed and commented on Oleg Chuvakin
- especially for topwar.ru
Ctrl Enter
Noticed oshЫbku Highlight text and press. Ctrl + Enter
We are
A new round of the Japanese-Chinese dispute over the Senkaku archipelago: Is Tokyo's “anti-ship optimism” justified?Results of the week. “Russians, surrender, we are a horde!” - “And us - army!”
72 comments
Information
Dear reader, to leave comments on the publication, you must to register.