In the US, working on the creation of a large transport airship

17 September 2013
31
After the famous disaster of the German airship "Hindenburg", which occurred in 1937, the era of airships began to move towards its sunset. These "heavenly whales" in the sky were replaced by planes and helicopters, they began to appear much less often in the air. At the same time, the airships were probably a safer vehicle (even in the Hindenburg crash, 2/3 of all passengers escaped) than the airplanes, they are also much more energy efficient, since there is no need to burn fuel to maintain the airship. It is the energy efficiency of this solution that prevents the airships from dying, even in the era of supersonic aviation.


The American company Worldwide Aeros is currently actively working on a prototype of a new transport airship, which will be deprived of the shortcomings of its predecessors. Based in California, the company created the Aeroscraft airship, which can continue the traditions of the famous German "zeppelins" at a much higher environmental and technological level. The airship can be used for solving civil and military tasks. The airship Aeroscraft has a very spacious cargo compartment, it can make a vertical take-off and landing, which allows its use in a war zone or in areas of natural disasters, where there are no prepared sites.

Safety of the airship is ensured by the use of compressed non-combustible helium, the rigid frame of the airship is made of carbon fibers and ultra-light bullet-proof aluminum. Thus, the preservation of its form does not depend on the fullness of helium. Depending on the modification, the maximum carrying capacity of the airship will be 66, 250 or even 500 tons. The customers of this airship are the US Department of Defense and NASA. 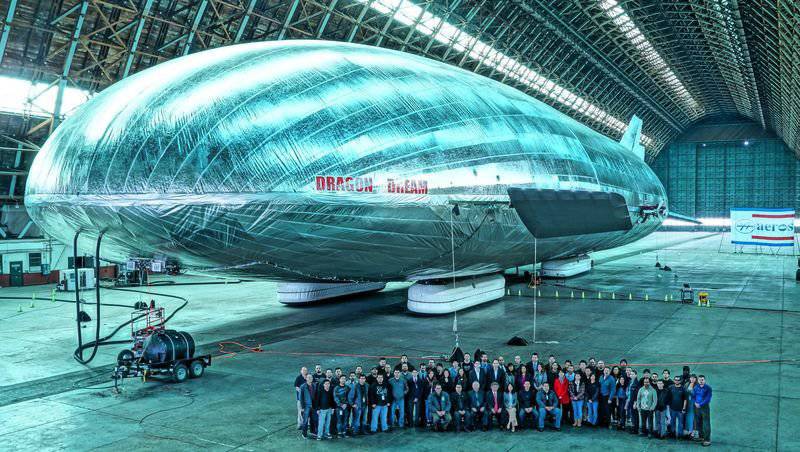 The Pentagon intends to use this airship to transport payloads for its tactical brigades around the globe. Although the speed of the airship is only about 115 miles per hour, which is significantly inferior to the speed of modern transport aircraft, this disadvantage is compensated by the ability to land on unequipped land and a large aircraft carrying capacity. Without refueling in the air, the range of the airship Aeroscraft can be about 3000 nautical miles. It is reported that the first airships of this project will move to the world market, starting with 2015 year.

The creators of the airship Aeroscraft, related to the new type, have begun to conduct test flights. The new airship is not inferior to the largest modern military transport aircraft in terms of carrying capacity, and is also able to travel thousands of kilometers through the air, using much less fuel for this. According to experts, the development of the Californian company Aeros can be easily adapted for the transportation of goods that are currently transported by land by train and truck, and by sea by container ships.

American engineers have been working on building their revolutionary airship for several years. According to the developers, the project is currently in its final stage. The engineers have already completed the construction of a prototype, which should in practice prove the efficiency of the chosen concept and give the engineers the opportunity to carry out additional configuration of all the airship systems. The length of the built prototype is almost 77 meters. At the same time it is in 2 times smaller than the model, which in the end will have to go into mass production. But in the built demonstration machine, the same hull structure is used, as well as a similar chassis and flight control system. 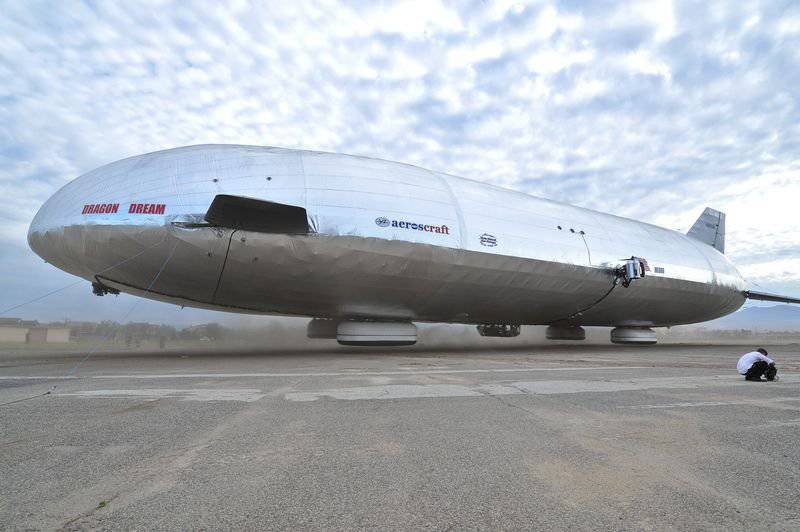 American engineers are ready to demonstrate the ability of the vertical take-off and landing of the Aeroscraft airship, which allows for the rapid delivery of goods by air. As planned by the creators, this function can make the airship an ideal option for trade and transport companies. It is reported that the full-fledged version of the Aeroscraft airship will be ready for the first flight in the next 3 years, that is, to the 2015 year. Even in the smallest version, the airship can transport cargo weighing up to 66 tons at a speed of the order of 220 km / h. The airship will be able to travel up to 3000 nautical miles in one flight without refueling and fly at altitudes up to 5,5 km. For reference, the largest of the existing military transport aircraft An-124-100-150 "Ruslan" is able to transport cargoes weighing up to 150 tons by air.

The new airship is perfect for the transport of goods and passengers in those regions, access to which for one reason or another is significantly limited. Aeroscraft can be used to transport oil production equipment to remote areas, to deliver humanitarian aid to areas affected by natural disasters and to transport huge turbines to remote hydroelectric power stations, as well as to transport heavy military and civilian equipment through the air.

Unlike airships, which must maintain their zero buoyancy and maneuver due to variable-angle propellers, the American airship Aeroscraft will exchange the unique system of gas-filled tanks COSH (Control of Static Heaviness), by means of which the static lifting force is controlled relative to the air. This system functions in exactly the same way that ballast tanks of submarines and other similar devices operate. 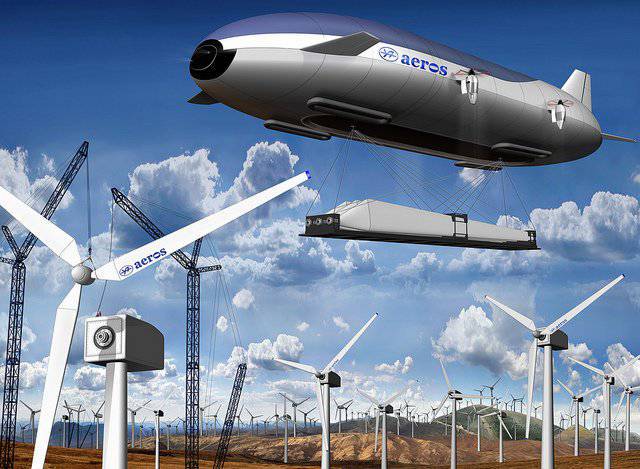 The revolutionary internal ballast control system is one of the key features of the Aeroscraft airship. All airships of previous generations at the time of unloading had to be tied to the docking site or loaded with additional ballast so that they would not fly away. However, the Aeroscraft ballast control system allows pilots to control the vertical position of the airship by compressing helium inside the cylinders, which in turn allows the gas to become heavier than air and bring the airship closer to the ground.

As soon as loading or unloading is completed, the pressure of helium in the tanks decreases, and the airship soars into the sky, adjusting its direction of movement in the air with the help of turboprop engines installed on it. Thanks to this revolutionary system, the Aeroscraft airship does not need an aerodrome or docking matches - it only needs a free piece of land, which should be large enough for the vertical take-off and landing of the airship and its subsequent unloading.

The airship Aeroscraft can be used on any flat platform and perform instant unloading. It is planned to apply the following technology for this: when the airship approaches the ground, the transport container, hidden for better aerodynamics in the airship's hull, is advanced, and at the moment of contact with the earth's surface, it is detached. After this, the airship, raising its buoyancy, abruptly gains altitude, and the transport container simply remains on the ground. 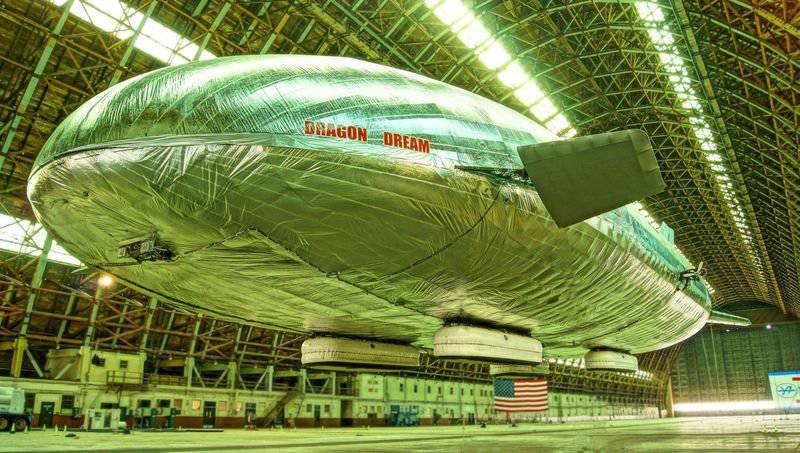 Among the features of the new airship Aeroscraft Dragon Dream can be noted its flight control system using the Fly-by-Light bus. Fiber optic cables are used in this bus for data transmission, which allows for data transfer at a higher speed and makes the ship's control system more protected from various electromagnetic interference. At the same time, the Fly-by-Light tire will be used for both automatic and manual control of the airship.

With a minimum tonnage of 66 tons, the airship does not require a ready runway or a specially equipped platform. Thanks to this, Aeroscraft airships can become an indispensable means of delivering goods to the most inaccessible corners of the planet. Aeros Corp. Calculates to build the Aeroscraft 3 airship models: ML866 (payload 66 tons), ML868 (payload 250 tons) and ML86X (payload 500 tons). In addition to the usual delivery of goods from point A to point B, these airships can also be used as flying hotels, whose residents will be able to travel around the world by air in 80 days.

It should be noted that the first experienced airship Aeroscraft Dragon Dream took to the air, being tied to the surface of the Earth by a series of safety cables 7 September 2013 of the year. This airship will make its first independent flight in the coming weeks.