Homeland Shield: just need to sift factory marriage. About the future of Bulava 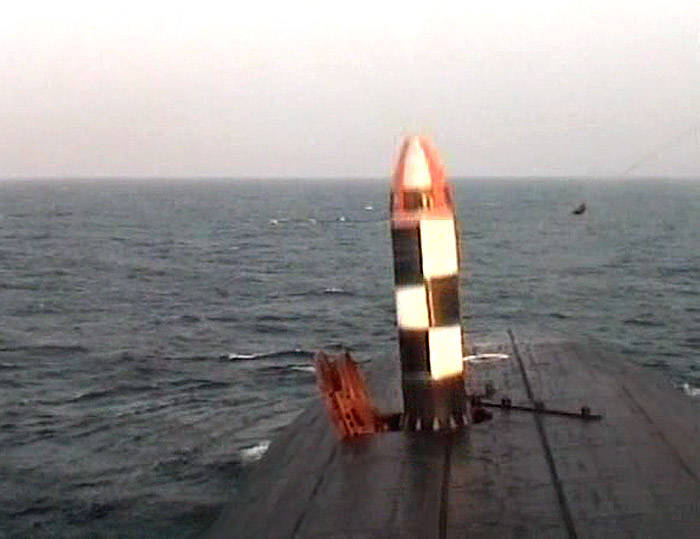 Two good news РѕС‚РµС З РµСЃС‚РІРµРЅРЅРѕРіРѕ РїРѕРґРІРѕРґРЅРѕРіРѕ fleet came the other day almost simultaneously. The third nuclear submarine missile carrier of the latest 955th project (Borey) K-551 "Vladimir Monomakh" first went to sea for factory sea trials. And the first - K-535 "Yuri Dolgoruky" - arrived at the place of permanent basing in Gadzhievo. This news could inspire pride and confidence - after all, updating the composition of the carriers of marine intercontinental ballistic missiles is an urgent need. Strategic missile submarines (RPKSN), built during the Soviet era, should give way to the formation of new ships. The terms of their operation cannot be supported indefinitely. And to replace the boats that are serving, now a series of ten Boreas is being built.

However, the accident at the launch of the Bulava ballistic missile from onboard the Alexander Nevsky K-550 (the second submarine of the series) questioned the entire program of updating the naval component of the strategic nuclear forces. P-30 "Bulava" - the main thing weapon "Boreev". For the sake of this weapon they were created. But when the reliability of this weapon is not guaranteed, the combat value of the Bulava carriers, Boreas-type submarines, is also in doubt.

No other missiles can equip these boats. Firstly, because the missiles themselves and their carriers, submarines, are only parts of the most complex strategic missile complex. "Boreas" in their current form were created for the D-30 complex, including the Bulava missiles. Secondly, because we simply do not have other marine complexes. The updated D-9 complex with the R-29РМУ 2 ("Sineva") and Р-29РМУ 2.1 ("Liner") missiles was created for the modernization of the 667BDR and 667BDRM submarines, which can remain in service only until they are replaced by "Boreas". The D-19 complex with the P-39 missiles of various modifications, contrary to popular belief, was not an alternative to the Bulava. It was created for the huge (the largest submarines in the world) SSXN project 941 "Shark". And its “extreme” version (with the Bark R-XNUMHUTTH rocket) was conceived as a temporary measure for the modernization of the Sharks, until new missiles and their new carriers appeared. Today, there is neither the D-39 complex, nor the missile carriers of this complex - the SSBN of the 19 project (more here). Work on other promising complexes was curtailed in the late 941-x and early 80-s. Thus, the only complex that can in the foreseeable future become the basis of naval strategic nuclear forces is the D-90 complex, which includes the Bulava missiles and their carriers, boats of the 30 project.

Complex D-30 was created really difficult. The first draft versions of the rocket appeared in 1992, when the Moscow Institute of Thermal Engineering (MIT), on its own initiative, continued to work out the most promising projects that were closed during the times of the so-called. adjustment. However, the right to life, these works received only in 1998 year. And the circumstances, as a result of which MIT took up the design of a new, sea-based ICBM, to this day serve as the basis for criticism of the Bulava. All unsuccessful launches (9 from 19) are associated precisely with the wrong choice of the developer, who did not develop ballistic missiles for submarines (hereinafter referred to as SLBM) before Bulava.

However, in reality it was much more complicated. In the USSR, SLBMs were developed by the SRC them. Academician V.P. Makeev (previously - CKB-385). In the USSR, there was a logical and reasonable program, in which the order of development of naval strategic nuclear forces was defined both at the 1990 and at the beginning of the 2000. It provided for the creation of two new missile systems (D-31 and D-35) and their two carriers - boats of the 955 and 935 projects (Borey-1 and Borey-2, respectively). Both complex was to develop GRTS them. Makeev. But “perestroika” made its own changes to these plans. The new D-35 complex and the Boreas-2 were abandoned in 1989 year. And the problems with the creation of the D-31 complex dragged on until the middle of 90-x, which led to the closure of all work and to the urgent redesign of the Borea-1 under the temporary, “shark” complex of the D-XNUMHUTH Bark complex. The first boat was laid only in 19 year.

But "Boreas" was not destined to carry and "Barki". Another resolution of the Council of Ministers of the USSR from 28 in November 1988 was the order of tests of the complex and the re-equipment of "Sharks". "Sevmorzavod" (Sevastopol) was instructed to prepare a submersible PS-65M launch complex for missile tests at the Balaklava range and a pilot SSRB of 619 Ave. for testing. The engines of the first stage for the “Bark” were to be produced by the Yuzhnoye Production Association (Dnepropetrovsk). After Ukraine’s withdrawal from the USSR, the production of the X-NUMX-th stage of the P-1 missiles and a number of other components ceased. The Pavlograd chemical plant, which produced fuel for rockets, began producing household chemicals. The rocket had to be redesigned. The test launches were transferred to the Severodvinsk Nenoks test site and were carried out from a land-based rather than a submersible stand. All three test launches (39, 1993 and 1994 years) were unsuccessful. And the latter - led to damage to the buildings of the landfill, because the rocket exploded at the start.

Perhaps, sooner or later, "Bark" and managed to bring to mind. The engines of all three stages were to be manufactured at Iskra (Perm), where they are now building engines for the Bulava. Then, the newest Borey SSBNs, instead of a new complex, would receive a good, but only a deeply modernized version of the old one. In addition, the "alien" and conceived as a temporary measure. And in the production of missiles of this complex, Russia would be dependent on a very close, but different state, in which accession to NATO is sometimes seriously discussed. But this did not happen. And in the autumn of 1998, the Commander in Chief of the Navy, Vladimir Kuroyedov, proposed to the Security Council that the topic “Bark” be officially closed, which was done. And already laid "Borey" was waiting for another rocket.

In the new competition for the main weapon for the boats of the 955 project, the SRC them. Makeeva participated with the Bulava-45 project, based on the Bark, and MIT offered his work under the designation Bulava-30. Both projects had solid fuel engines. The figures "45" and "30" denoted the conditional starting weight in tons. The MIT project had many components unified with terrestrial complexes developed at the institute (in particular with RT-2PM Topol). Unification promised a reduction in the cost of production and maintenance of the Strategic Missile Forces and the Navy. Moreover, the failures with the D-31 and Bark complexes were still too fresh. SRC lost the competition. And Borei redesigned for the third time under new missiles.

A series of unsuccessful launches of the Bulava already had a loud resonance. Contrary to popular belief, it was not the developer’s choice that was to blame for such a difficult test cycle, but the removal from support of the work of the 28 Marine Central Research Institute of the Russian Ministry of Defense, as well as the decision to abandon the traditional rocket test launches from the submersible stands. Nonetheless, today the Bulava R-30 SLBM is a fully prepared and adopted weapon. And the carrier of this weapon, which was noted as an unsuccessful launch of a rocket, —Alexander Nevsky’s SSBN — was successfully tested. There are no complaints to the boat, the ship launch complex has worked in a regular way.

“Excuse me, what's the matter, if the missiles are good, and the submarines too?” - this is the question that any sensible person must ask.

But the fact is that the industry was not ready to issue a stable quality of serial products. The termination of the flight of the rocket took place at the site where the second stage began to work, which automatically means a question about the quality of the work of the Iskra NGO. And what's more, military acceptance managed to miss the missiles with a defect, which indicates, to put it mildly, a frivolous approach to business.

Now it will result in the return of the entire batch of already manufactured missiles to the Votkinsk plant for complete verification. As well as the delayed transfer of the fleet of two boats of the type "Borey". Well, five additional test launches, which Sergei Shoigu demanded, are not needed to make sure that the new missile system is adopted correctly. There are no doubts in his fighting qualities, which has been proven by many times successful launches. Additional launches are needed to ensure that citizens are convinced: the quality of the “Shield of the Motherland” is again under control.