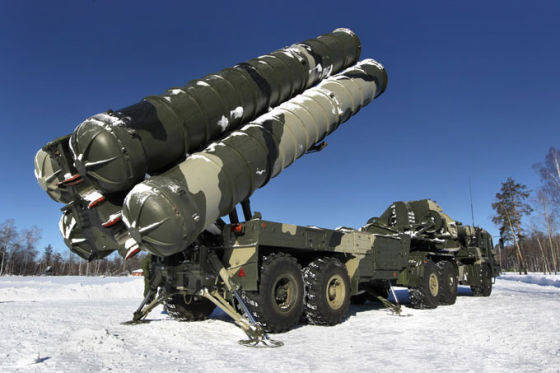 - C-300PS is a third-generation all-weather multi-channel anti-aircraft missile system designed to intercept airplanes, cruise missiles and tactical ballistic missiles. The system is highly efficient, capable of directing 12 missiles at the same time on 6 targets, is placed on high-traffic vehicles, the launch of missiles is made from transport-launch containers in an upright position.

The range of high-altitude targets in modern versions of the C-300 reaches 200 km, the system is capable of destroying low-flying targets such as cruise missiles. If the opponent uses non-stealth planes, the C-300 will be an effective shield against them.


However, the C-300's firing efficiency is highly dependent on the accuracy of target designation, the radar is not effective enough to counter stealth aircraft using anti-radar missiles. Therefore, the effectiveness of C-300 depends entirely on the availability of advanced detection, tracking and guidance systems, without them the combat capabilities of the complex will be very limited.

- In what conditions was the C-300 system developed?

- In the late 60s of the last century, the military aviation leading countries of the world began to abandon the breakthrough of air defense at high altitudes, instead began to practice methods of overcoming the enemy defense system at supersonic speeds at low altitudes ("low-altitude supersonic jumps"). In the former Soviet Union, work began on the creation of the S-300.

The system went through two stages. At the first stage, the C-300 was designed to destroy aerodynamic targets, that is, aircraft, which was a fairly simple task. But with the widespread use of tactical ballistic missiles, more powerful modifications of the C-300PMU-1, C-300PMU-2 and C-300PMU-3 appeared.

Currently, a C-300 system has been created on the basis of the C-400 system, which solves the tasks of regional air defense and missile defense. The capabilities and vitality on the battlefield of this system are greatly enhanced.

- How do you assess the capabilities of the C-300 family compared to other similar foreign systems?

- The C-300PMU-2 system will be slightly more efficient than the American Patriot PAC-2 in terms of the interception of ballistic targets, since it has a more powerful warhead. During the Gulf War, the explosion of the Patriot missile fragmentation warhead was not effective enough to destroy Iraqi ballistic missiles in flight. But the American complex has more advanced radar tools and EW system. C-300 does not have the ability to quickly adjust the operating frequencies to counteract the enemy EW.

In general, it can be said that C-300 and Patriot are among the leading world-class air defense systems in the world; they have both disadvantages and advantages in relation to each other.

- What work is being carried out in Russia on promising anti-aircraft and anti-missile systems?

The C-500 complex, being developed on the C-400 base, has enhanced anti-missile capabilities, will also hit satellites in near-earth orbit. The new system will be an integrated complex of air defense, missile defense and PKO (anti-space defense) for all types of armed forces of Russia.

- After adopting new systems, will C-300 remain in service?

- Judging by the results of firing at the landfills, modern versions of the C-300 meet the requirements set for them, in addition, they have a reserve for further modernization. The adoption of the C-400 does not preclude further use of these systems, since the C-400 can control the combat assets of the C-300PMU-1 and PMU-2 complexes. Their combination will give more combat effectiveness in building a defense system against an air enemy.

C-500 is also compatible with C-400. In the foreseeable future, the basis of the Russian air defense system will be C-400, while C-500 with its interceptor missiles will perform missile defense tasks. Modern C-300 versions will also perform their tasks.

Ctrl Enter
Noticed oshЫbku Highlight text and press. Ctrl + Enter
We are
China is fighting for supremacy in the skyRussia is unlikely to avoid China’s expansion in one form or another.
Military Reviewin Yandex News
Military Reviewin Google News
28 comments
Information
Dear reader, to leave comments on the publication, you must sign in.