The hopes and anxieties of the Syrian capital

17 September 2013
19
On the square of Yusef Al-Azme - the Minister of Defense of Syria in the early twentieth century, who died fighting the French invaders - the Syrian flags are flying. Hundreds of people have gathered to express their contempt for American threats. "Down, Down You-Hey!" ("Down with the USA!") - the Syrians are chanting. 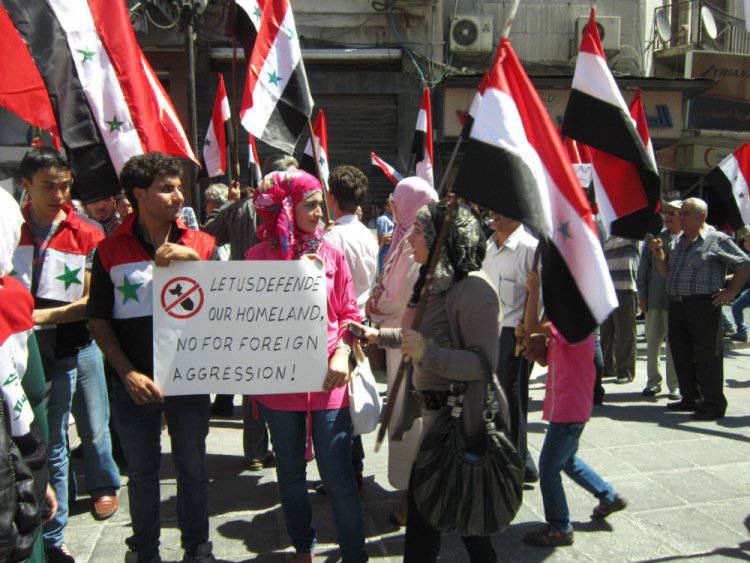 Socialists, communists, volunteers from youth organizations, national patriots are all united, all are protesting Obama’s brazen threats against Syria. In the hands of the gathered - posters in Arabic, English, Spanish "No to aggression!", "No to war!" and portraits of Bashar Al-Assad, who became a new symbol of resistance to the old-new NATO-fascism. Syria is threatened by new invaders, and new heroes right here, in the square of the hero Yusef Al-Azme, are ready to enter into a deadly clash with the enemies of the Fatherland. 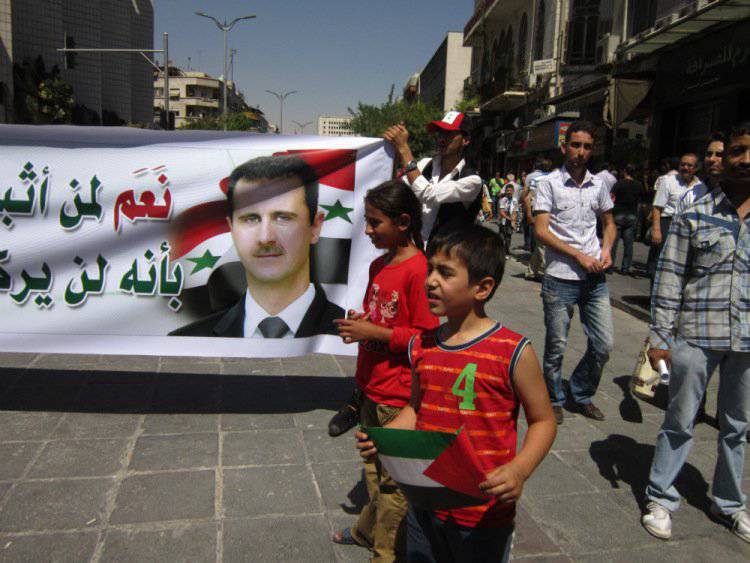 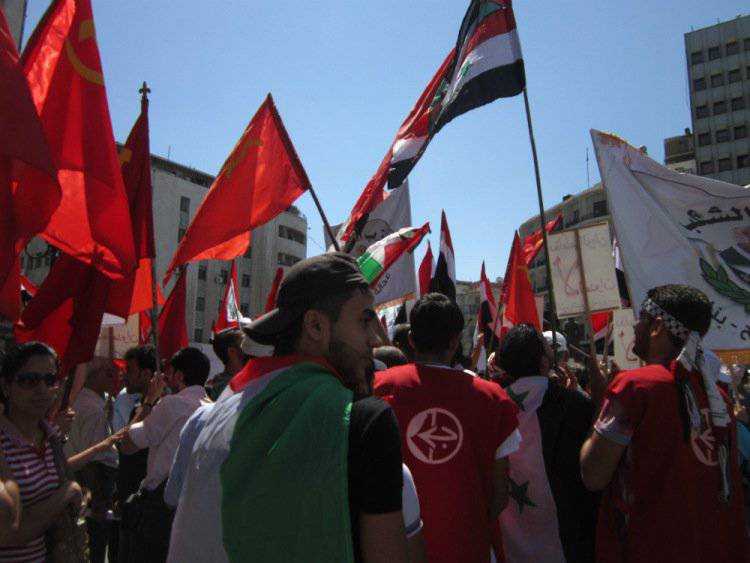 Beyond distant seas and oceans, on the other side of the globe, Washington politicians change their position like gloves. Their statements are contradictory, but each of them is false and malicious. Like swindlers of cards, they play with Russian diplomacy. While Obama continues to threaten Syria with war (however, postponing congressional voting, for, according to preliminary data, the idea of ​​attacking Syria does not enjoy the support of a parliamentary majority), Kerry is negotiating with Lavrov. Then the parties give a press conference at which, for all attempts to demonstrate the visibility of the agreement reached, the foreign ministers of the Russian Federation and the United States say different, sometimes opposite things. So, Lavrov argues that according to the agreement reached on chemical weapons in Syria, we are not talking about any force actions or new sanctions - but Kerry, speaking after his colleague, threatens to use Chapter Seven of the UN Charter - which provides for the use of violence.

Even within the framework of one press conference, the US “forgets” about what they had just spoken about during the negotiations, and they are trying to replace the rules of the game as they go along. Not a day goes by - as the female lips of Jennifer Psaki, a representative of the US State Department, are saying the long overwritten phrase: they say, Assad has no place in the political future of Syria. How many times in recent years have women’s lips declared monstrous wars? The female mouth of Albright proclaimed the bombing of Yugoslavia - a country that once sheltered this Madame and saved her life when Madeleine was just a two-year-old Jewish girl. Condoleezza Rice’s mouths of women spewed out speeches about the war with Iraq - a war based on false evidence that Baghdad allegedly uses chemical weapons. The card was spotted - but now the cheaters once again get it out of the greasy sleeve. The female mouth of Hillary Clinton wasted a womb of “Wow!” When terrible tortures and death of Muammar Gaddafi were shown on the TV channels ... And now the next women's mouths spew fascist speeches ...

That is, a compromise on the formulation of chemical weapons under international control, the accession of Syria to the Convention on the Prohibition of Chemical weapons - All this is once again not satisfied with the official Washington, despite his earlier statements. Truly, it is time to rename the White House to the Yellow House. But since when is the presidential election in Syria to be held in the US State Department?

However, some women's lips have already disgraced themselves in the USA. War hawks, such as Senator John McCain, liked to refer to the "outstanding expert" on the Middle East, 26-year-old Elizabeth O'Beggi.

More sober politicians have said that it is impossible to render assistance to the so-called “Syrian opposition”, since the majority in its ranks are members of Al-Qaida and other extremist organizations. “No,” Elizabeth reassured, “it’s not. Al-Qaida is only a minority of rebels.” American newspapers liked to publish her conclusions; supporters of terrorists were constantly referred to them with money and modern weapons.
And now it turns out that this woman, who was a leading analyst at the United States Institute for the Study of War, has ... a fake Georgetown University diploma. She has great connections with the Syrian "oppositionists" and receives money from them. And so “hawks of war” relied on such ladies in their conclusions and conclusions, imposing them on American society. And not only American, but the whole world. Colin Powell is involuntarily remembered - first with a test tube, loudly stating that Iraq absolutely definitely has chemical weapons, and after a few years - awkward and confused, admitting that its sources turned out to be wrong. Just do not return the lives of dead Iraqis. Do not restore the terrible damage caused to the country. And no one was responsible. Impunity and breeds new insanity. Now one of the leading "experts" failed miserably - but the weapons and money to the terrorists have already been delivered, and many, many people have already died from them.

And while the Syrians hopefully go to rallies in Damascus, new alarms appear on the horizon. Just like in the song of the time of the revolution carnations in Portugal: "There is a struggle for the right to live, breathe, laugh and love, but there is anxiety among hopes. There is a struggle between good and evil. Freedom has called us all, the road is scarlet from carnations."

One of the terrible tragedies is the tragedy of the Christian town of Ma'alyulya near Damascus. In the old days, tens of thousands of tourists and pilgrims stretched to this holy place - to visit the monastery of St. Thecla. According to legend, the girl was from a noble family, distinguished by extraordinary beauty. Adopted Christianity under the influence of the sermons of the Apostle Paul. Her parents were against the convictions of her daughter, moreover, they wanted to marry her unloved forcibly. For refusal, she was imprisoned, then relatives of the loser-groom got a cruel sentence for her - burning at the stake. But during the execution the fire was flooded with rain, and the girl was saved. After that, she fled to places near Damascus, where she healed people for free. For this, the doctors who earned money took up arms against her and sent the robbers. When Thekla ran away from them, a crack in the rock unexpectedly opened up in front of her, and the girl was able to hide in the doorway, after which it was again closed to the pursuers. The word "Maalyulya" means "passage." So the name of this place has gone. They still spoke Aramaic, the language of Christ. To save this language from extinction, Syrian President Bashar Al-Asad even founded an institute for its study. This place was visited together by the head of the Syrian state and Hugo Chavez who arrived on a visit to Syria. Both the authorities and the people of Syria deeply respected his holiness.

But for the bandits there is nothing sacred. And on September 8 they invaded Maalula. Desecrated the temples. They shot from a grenade launcher at the statues of Christ and the Virgin Mary. According to an Iranian correspondent for the FARES agency, who visited the site of the tragedy, the “oppositionists” beheaded 30 Christians. 70% of civilians were forced to leave their homes. Currently, the battles are proceeding with varying success, the main square of the town passes from hand to hand - the rebels constantly receive support.

Christians of Maalouli addressed Obama with a letter in which it was said: if now, when the Syrian state is strong, such incidents against Christians happen, what will happen when you weaken the state with your bombardments?

The USA and their puppets in Europe are now going against Christianity. And not only against Christianity, but against all the values ​​of humanism. No wonder so great is the resistance to the inhuman war against Syria in the whole world. No wonder the people of Washington and Paris, Prague and Moscow, Caracas and New Delhi - on all continents, even very far from the Middle East - take to the streets. They speak different languages, but their slogan is one: "There is no war! Hands off Syria!"