Zlatoust at the American Embassy. Masterpieces of Russian espionage 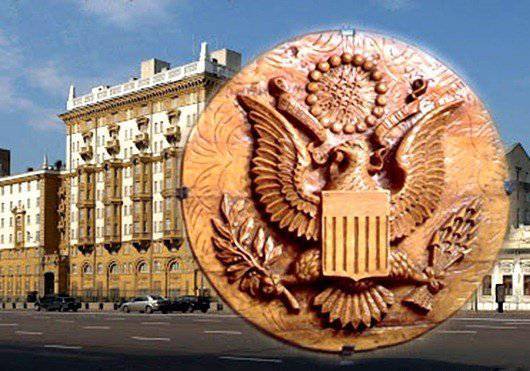 Secretly Urgently.
Operation Moscow Heat began - a fire center appeared on the staircase in the building of the US Embassy at Mokhovaya Street, 13, and began to spread across the second floor of the building. Strong smoke caused the evacuation of members of the US embassy, ​​security, technical staff of the Embassy and their family members. Currently, our "fire brigades" have arrived at the place of emergency. We act according to plan "B".

... Several fire-red cars with sirens flew into the courtyard of the US Embassy; fire brigades rushed briskly inside the building, simultaneously straightening their fire hose. And right there they stopped in confusion - the American marines blocked the way up. On a furious shout: “Get out of the way! Everything will burn there, mother #% $ # !!! ”followed by a hard answer in broken Russian:“ Let everything burn. In the name of the President of the United States, unauthorized access is prohibited. ”

An attempt to force a breakthrough in the American embassy failed. The most “tasty” premises — the offices of military intelligence officers, cryptographers, analysts, State Department employees, and the most important room — the ambassador’s office — were still inaccessible to Soviet intelligence. 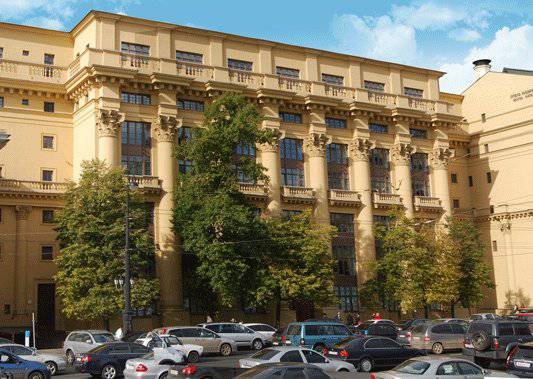 There are no such fortresses that the Bolsheviks could not have taken (J. Stalin)

This fantastic история It began at the end of 1943, when Stalin was informed about the creation in the USSR of a unique listening device - a microwave resonator designed by Lev Theremin.

The Perpetual Mover did not need batteries and operated in a completely passive mode — no magnetic fields, no power sources of its own — nothing that could unmask the device. Placed inside an object, the “tadpole” was driven by microwave radiation from a remote source - the microwave wave generator itself could be located anywhere within a radius of hundreds of meters. Under the influence of the human voice, the nature of the oscillations of the resonating antenna was changed - it remained only to receive the signal reflected by the “bug”, record it on a magnetic tape and decipher it, restoring the original speech.

The spy system, code-named "Chrysostom," consisted of three elements: a pulse generator, a resonator ("bug") and a receiver of reflected signals, placed in the form of an isosceles triangle. The generator and receiver could be located outside the object being listened to, but the main problem was the installation of a “bug” in the office of the American ambassador. 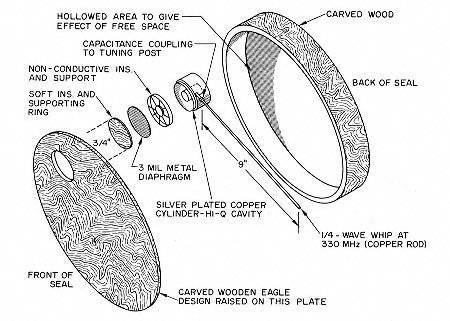 Focus with fire failed. As practice has shown, the safety of the Americans was all OK. Access to the secret premises of the Embassy was strictly limited. None of the Soviet citizens and members of official delegations were allowed close to the upper floors of the building.

It was then that the idea of ​​the "Trojan horse" was born.

A rich collection of souvenirs made of wood, leather and ivory was urgently delivered to the reception office of the People's Commissar of Interior Beria: a shield of a black alder Scythian warrior, two-meter tusks of a mammoth, a Ericsson telephone set inlaid with ivory - a gift from the Swedish king Nicholas II, a luxurious basket for papers, made entirely from ivory elder…

Alas, none of the rare exhibits impressed NKVD technical specialists - to install the Zlatoust, a very special souvenir was needed, taking into account the technical characteristics of the listening device itself. A souvenir that could not leave the American ambassador to the USSR Averell Harriman indifferent. An exceptional rarity that would be impossible for anyone to peredelit or "forget" in the back room of the Embassy.

How to outwit Harriman

... The orchestra rang out and the pioneer choir sang:

O say, can you see, by the dawn's early light,
What is so proudly we hailed at the twilight's last gleaming?
Whose broad stripes and bright stars, through the perilous fight,
O'er the ramparts we watched, were so gallantly streaming? ...

Oh, tell me, you see in the first sun rays
What among the fights did we honor in the evening lightning?
In blue with a scattering of stars our striped flag
Red and white fire from the barricades will once again appear ...

The solemn ruler in the Artek camp, tied red ties and a line of young voiced voices singing the English anthem of the United States - the American ambassador broke through a tear. Touched by a warm welcome, Harriman handed the pioneer organization a check for 10 thousand dollars. The British ambassador, who was present on the lineup, also gave the pioneers a check for 5 of thousands of pounds sterling. At the same moment, to the solemn sounds of music, the four pioneers introduced a varnished wooden shield with the USA coat of arms carved on it. 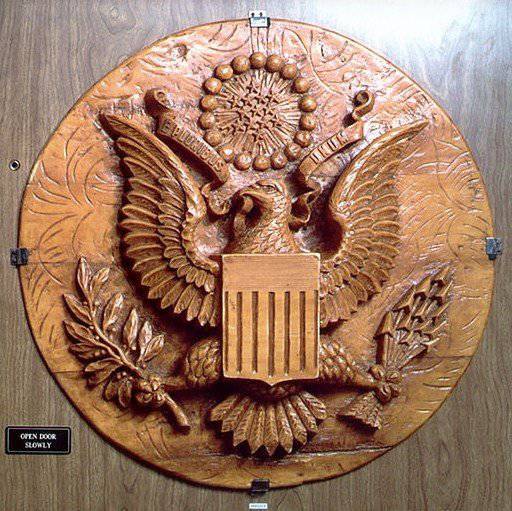 To the thunder of applause, the director of Artek handed over to “our American friends” a certificate for the rare coat of arms signed by the all-union elder Kalinin: sandalwood, boxwood, sequoia, ivory palm, parrotia Persian, red and ebony, black alder - the rarest species of wood and skillful hands of Soviet masters . The gift turned out well.

- I can not take my eyes off this miracle! Where can I hang it? - a rare case when Harriman said out loud what he really thought.

“Hang it over your head,” Stalin’s personal translator, Comrade Berezhkov, unobtrusively hinted to Harriman, “the British ambassador will burn with envy.”

A successful operation to introduce Zlatoust to the American Embassy was preceded by a long-term serious preparation: a specially organized event - the celebration of the 20 anniversary of the Artek camp, where the American and British embassies were invited to “express gratitude from Soviet children for their help in fighting fascism” - the ceremony , whose visit was impossible to refuse. Thorough preparation - pioneer choir, ruler, orchestra, perfect cleanliness and order, special security measures, two battalions of NKVD fighters disguised as pioneer guards. And finally, the gift itself with a “surprise” is a unique work of art in the form of the United States coat of arms (Great Seal) with a “Termen resonator” mounted inside.

As the analysis of the “bug” signals showed, the coat of arms with “Zlatoust” took its rightful place - on the wall, right in the office of the head of the American diplomatic mission. It was here that the most frank conversations were held and emergency meetings were held - the Soviet leadership learned about the decisions taken by the ambassador before the US President himself.

On the upper floors of the houses on the opposite side of the street, in front of the American Embassy, ​​two safe houses of the NKVD appeared - they installed a generator and a receiver of reflected signals. The espionage system worked like a clock: the Yankees were talking, the Soviet intelligence officers were recording. In the mornings, wet linen was hung on the balconies of the apartments, the “housewives” from the NKVD diligently shook out the rugs, literally blowing dust into the eyes of the American counterintelligence.

For seven years, the Russian bug "undermined" worked in the interests of Russian intelligence. During this time, Zlatoust survived four ambassadors - every time the new inhabitants of the office sought to change all the furniture and interiors, only the wonderful coat of arms always remained in its place.

The existence of the "bug" in the Embassy of the Yankees learned only in 1952 year - according to the official version, radio technicians accidentally discovered on the air the frequency on which Chrysostom worked. An urgent inspection of the Embassy premises was carried out, the entire office of the head of the embassy “shook up the bottom” - and found ... 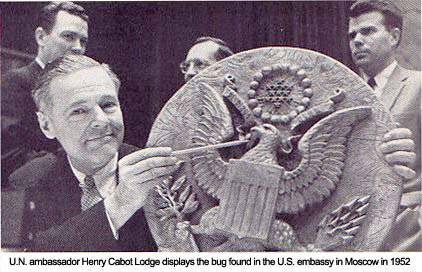 At first, the Americans did not understand what kind of device was hidden inside the shield with the emblem. Metal wire length of 9 inches, hollow resonator chamber, elastic membrane ... no batteries, radio components and any "nanotechnology". Mistake? Was the real bug hidden somewhere else ?!

The British scientist Peter Wright helped Americans understand Zlatoust’s work principles - familiarity with the microwave resonator Theremin was shocked by Western intelligence services, the experts themselves admitted that if not for the case, the “eternal bug” could still “undermine” the symbol of American statehood in the Embassy USA Moscow.

The Americans did not dare to reveal to the media the shocking fact that a bug was discovered that he had worked for more than seven years in the office of the Head of the US embassy. Impartial information became public only in 1960, the Yankees used Chrysostom as a counterargument during an international scandal involving the American intelligence officer U-2.

After extensive research of the coat of arms with a “secret”, our Western friends tried to copy “Zlatoust” - the CIA initiated the “Comfortable chair” program, but failed to achieve an acceptable quality of the reflected signal. The British were more fortunate - created under the secret government program "Satir", the bug resonator was able to transmit a signal at a distance of up to 30 yards. A pitiful semblance of the Soviet system. The mystery of the Russian "Zlatoust" turned out to be too tough for the West. 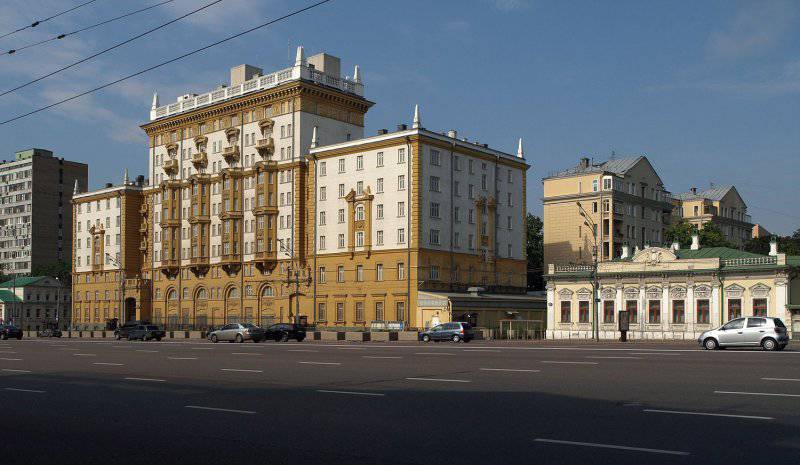 The old building of the US Embassy on Novinsky Boulevard

The new building of the Embassy in the Big Devyatinsky lane
One of the most successful operations of the Soviet intelligence in the years of the Cold War seriously disturbed the Americans. Zlatoust was just the beginning of the campaign to listen to the "enemy camp" - much later, during the renovation of the US Embassy building on Novinsky Boulevard in 1987, the Americans discovered that their apartments were literally teeming with all sorts of "bugs" and listening devices. But an even more shocking case was 5 December 1991 of the year - on that day, Vadim Bakatin, chairman of the Inter-Republican Security Service (SME, KGB successor), handed Xummer sheets in the US embassy complex in Moscow to the American Ambassador Robert Strauss 70. Eyewitnesses claim that at that moment the American simply lost the power of speech - the first person of the state security service passed weapon to the enemy! Finally, I was surprised by the volume of various “bookmarks” - for years the Soviet intelligence officers had been listening to the entire building up and down.

As for the bug Zlatoust, nowadays the coat of arms with a super bug built into it occupy a worthy place in the exposition of the CIA Museum in Langley, Virginia.

The forgotten genius of electronic music. A few words about the creator of "Chrysostom."

The unique resonator bug is a merit of the Soviet scientist and inventor Lev Sergeevich Termen (1896-1993). A musician in his education, he began his career with the creation of unprecedented electromusical instruments. Profound knowledge of music and electrical engineering allowed the young inventor to patent in 1928 the year “Termenvox” - an unusual musical instrument, the game of which consists in changing the position of the hands of the musician relative to the antennas of the instrument. Hand movements change the capacity of the "theremin" oscillatory circuit and affect the frequency. Vertical antenna is responsible for the tone of the sound. Horseshoe antenna controls the volume. 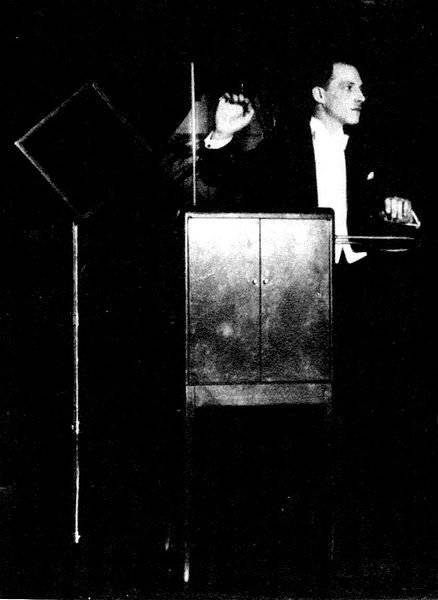 Laureate of the Stalin Prize 1947, for the creation of listening devices - L. Termen received his award not only for his work on the brilliant "Chrysostom". In addition to the passive resonator bug for the American embassy, ​​he created another technical masterpiece - the Buran remote infrared interception system, which reads the vibration of windows in the windows of a listening room using the reflected IR signal.