Syria. Pianos in the bushes 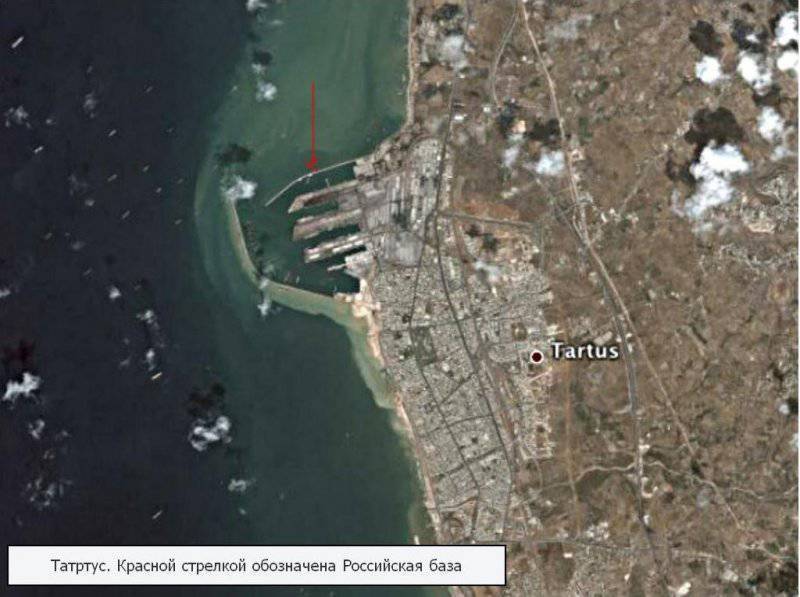 This is the desire to preserve the naval base in Tartus on any conditions. The Russian leadership is well aware that the position of the naval base in Sevastopol is extremely precarious. Despite the agreements concluded, Ukraine, when it moves away to Europe under pressure from European partners, will inevitably find a reason to liquidate this base. The planned base in Novorossiysk is inconvenient in that it is poorly protected from the vagaries of the weather. And no matter what Russian engineers come up with, the bora will always be an unpredictable sword of Damocles over the parking lot fleet. That is, when a bora occurs, the ships will be forced to go into the open parking lot. In this situation, the Tartu base is the only real base in the Mediterranean.

The United States and its Western partners stubbornly refuse to hear the statements of Putin and Lavrov, that Russia does not want to take the side of Assad, but stands on the position of a peace settlement. What does it mean? With a peaceful settlement, Russia hopes that it will be possible to reach an agreement either with Assad or with the new government on maintaining the base in Tartus for a long time. Such deafness leads to the inevitable conclusion that the main task of the United States is to liquidate the base in Tartus and close Russia’s access to the Mediterranean.

Thus, we approach the interests of the United States, which they do not want to sacrifice.

The main interest is the establishment of control over Syria. In addition to the task of eliminating the Russian base, the main task is to ensure the security of Israel. The longstanding sluggish confrontation between Syria and Israel resulted in destabilization in Syria. Iran was actively pushing Syria towards a conflict with Israel, but the rulers of Syria were well aware that this conflict would end in the collapse of the Syrian state and the loss of their power, reacted sluggishly to Iran’s initiatives. At the same time, as a result of this half-hearted position, two Islamist groups were formed on the territory of Syria. On the one hand, Hezbollah actively penetrated into Syria, and on the other, al-Qaeda dug in. Both irreconcilably sought to take control of the Islamist movements in the Middle East and, accordingly, to control the cash flows entering the region.

It should be noted that for the United States, both groups are equally unacceptable. Therefore, when Hezbollah and Al-Qaeda staged a showdown on Syrian territory, Obama was faced with a choice of which of the implacable enemies of the United States and Israel to help. It turned out that wherever you throw, everywhere is a wedge.

It is this situation that caused such a long non-interference in the events in Syria. However, when it became clear that the anti-Assad forces were not able to provide any real change through military action and the Asadiv forces became a real victory, which meant Hezbollah’s victory, everyone understood that such a victory would inevitably lead to Hezbollah’s multiple enhancement Israel, with whom Hezbollah has long-standing scores.

In this situation, it became simply unsafe to remain inactive. Al-Qaeda screamed at the whole world - we were beaten and arrogantly demanded support from the West. I will not talk about the moral side of such a quirk, Islamists did not have a moral, and no. Having declared an implacable war against Western countries at the time, al Qaeda now demands their help. In short, the United States and leading Western countries are in the position of Buridan's ass. I had to choose from two piles of shit. That is why it is so divided, in most cases, a single, Western community.

By the way, the overwhelming majority of the population of Western countries, intuitively understanding that they want to be drawn into a fight between two idiots, are so actively protesting against interference in Syrian affairs.

Obama is also well aware that there is nothing to catch now in Syria. Any decision will fail.

And then a piano appeared in the bushes. Chemical attack in Syria, and even during the presence of UN observers. Need to respond. And the reaction went. With virtually no support, both from allies and from his own Congress, Obama decides to take a preemptive strike to intimidate Assad. It is clear that such a blow will not bring a turning point in the war, it is in fact a civil one, between two Islamist groups. However, Assad can get scared and retreat.

It is clear that the planned strike will bring nothing good. There is not enough money anyway, but there is also military spending. And then a new piano in the bushes. The countries of the League of Arab States are ready to pay for military operations, only they require that a ground operation be carried out together with the air strikes.

A ground operation for Obama is the complete collapse of his policy. In this scenario, the upcoming Democrats will inevitably lose to the Republicans, and members of the same party will strongly ask for such a perdiocle with Obama.

And here again the piano. Putin agrees with Assad that he is ready to control chemical weapon, send it for destruction and sign the Convention on the Non-use of Chemical Weapons.

If the world community agrees with this option, then Putin has a real opportunity to bring Syria under control.

The technology is simple. UN experts travel to the locations of chemical weapons warehouses and are there preparing for their destruction. But war is all around and they need to be guarded. So, we need UN forces to ensure the safety of experts. And now we recall how Putin proposed to send the Russian military to the border of Syria and Israel to the composition of the UN troops. Surely he expects that none of the Western states will want to send their soldiers to protect UN experts in the boiling pot of Syria. And here Russia, with its readiness to send its military. And now, under the UN mandate in Syria, in the 50 areas where chemical weapons depots are stationed, the Russian military appear in blue helmets.

As you understand, this will not be for 20-30 soldiers, they simply will not be enough, and 50 battalions of paratroopers, well armed with armored vehicles, which in two or three days will be unloaded from Russian ships, and under the cover of naval artillery. Unload is where - in Tartus. Moreover, the Russian group is equipped with cruise missiles and no one can say that the C-300 complexes are absent on the territory of the Russian base.

So this may be the development of events. Now imagine that the Russian soldiers in the UN helmets are suddenly attacked. No matter who, Hezbollah or al-Qaeda.

Who in the UN Security Council will oppose the UN forces to repel attacks on chemical weapons storage facilities threatening its capture. No one. Otherwise there will be a complete loss of face. You wanted to bomb Assad, and now, when under the blow of UN power, you refuse to protect the international contingent?

That is, the Russian military will completely untie their hands in delivering rocket attacks on the locations of the terrorists who attacked them and in carrying out ground operations to eliminate the attacking terrorists.

Do you think the Islamists from Hezbollah and al-Qaida will be able to hold out for a long time? By my count, ten days. Will be swept away and dumped into the sea. And the UN contingent will remain to ensure order and the safe destruction of chemical weapons.

Who will be good from such a development of events? First of all, Russia. All tasks are completed. The base in Tartus will be expanded and its long-term operation will be ensured.

Secondarily to Israel. If there is a Russian military contingent on Syrian territory, all provocations on the Syrian-Israeli border will be stopped. Suppressing any attempts to violate the peaceful borders of Israel will be the main task of the Russian contingent. Having received all that was needed, Putin categorically does not want to enter into any confrontation with the United States and the West. That is, he will become the guarantor of peaceful borders.

The United States eliminates the danger center for Israel with the help of others, while remaining the chief controller of the region. Obama will save face and the opportunity, if necessary, in case of any troubles to blame everything on Russia.

Now who will lose. First of all, Hezbollah and al-Qaeda. Hezbollah will have to shut up in Lebanon, and Al Qaeda will retreat to Pakistan.

That is, now there is a real opportunity to cut the tangle that lasted in Syria, and to the general pleasure. And all thanks to the piano in the bushes.

Ctrl Enter
Noticed a mistake Highlight text and press. Ctrl + Enter
We are
5-I operational. Interview of Admiral Retired Selivanova Valentin EgorovichWhat you didn't want to know about England
92 comments
Information
Dear reader, to leave comments on the publication, you must to register.