Will Russia buy the only Ukrainian cruiser? 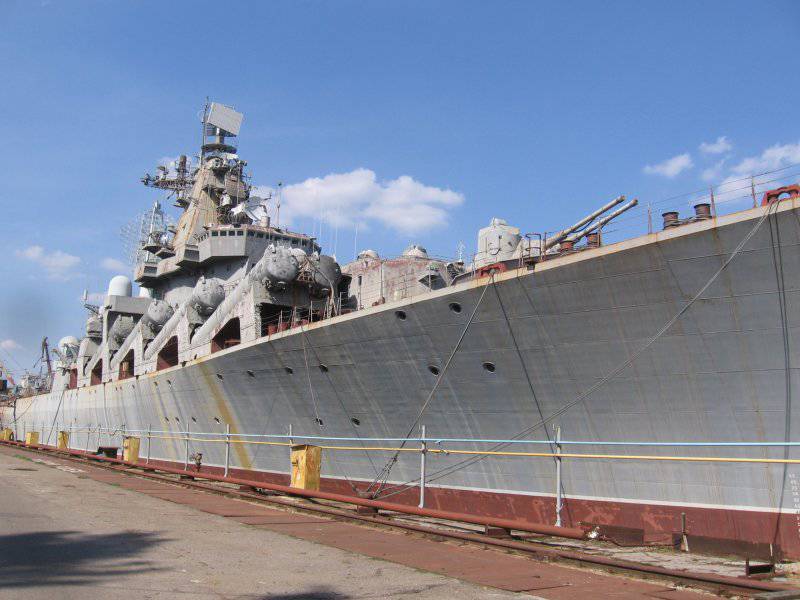 Missile cruiser "Ukraine" will become Russian. At least, such information has appeared in the media. In particular, we are talking about the fact that Russia has expressed its willingness to pay for an unfinished missile cruiser, which has been at Nikolayevsky Shipbuilding Plant for almost two decades, 1 a billion rubles (approximately 30 million dollars).

According to the Ukrainian expert on defense and security issues, Vladimir Likhodovsky, such an agreement for Ukraine is to some extent advantageous, but not as much as one would expect. At the same time, Russian representatives, on the contrary, are confident that the price offered is quite acceptable for an unfinished ship.

First of all, it should be noted that the project of the Ukraine missile cruiser was developed at the Northern Design Bureau in Leningrad. Until 1998, it was called "Admiral fleet Lobov. " The construction of the ship was begun in 1984 at the Nikolaev Shipbuilding Plant. The customer was then the Navy of the Soviet Union. It was assumed that the cruiser will become the fourth vessel of the Atlas project 1164, besides him, the project included the cruisers Moscow, Varyag, and Marshal Ustinov.

This missile cruiser has a width of 28 meters, a length of 187 meters, a draft of the order of 8,5 meters, and a displacement equal to 11,5 thousand tons. According to the project, the vessel should be armed with 16 installations of anti-ship supersonic basalt missiles P-500, 64, Fort-C-300, 40 missiles, Osa-M anti-aircraft missiles, several RBU-6000, as well as several torpedo missiles five-tube apparatus and three batteries of 30 mm AK-630 guns.

Six years later, in 1990, the “Ukraine” was launched. In October 1993, the ship, ready for 75 percent, was withdrawn from the Soviet Navy and transferred to the ownership of Ukraine. Then its value was estimated at 720 million dollars. The following year, a crew was formed specifically for the cruiser, but in 1996, the construction of the cruiser was suspended due to lack of funding. At the same time, about 6 million hryvnia was allocated annually for the maintenance of the ship from the state budget.

In February 1998, the Ukrainian head of state decided that the cruiser should be completed. The crew was re-formed and re-dissolved, and the cruiser’s readiness increased to 95 percent. Then there was another attempt to form a crew. And in 2004, the decision to open the cruiser for excursions appeared.

In general, it should be noted that at present the situation with a warship is increasingly reminiscent of history with a suitcase without a handle, which is inconvenient to carry, and it’s pitiful to quit. However, there is one serious difference: the story of the ship, it seems, has received at least some development.

As we mentioned above, according to defense and security expert V. Lidohovsky, the deal is partly beneficial for Ukraine, because the Russian side intends to buy a cruiser built at 95 percent, with the exception of the Bazalt missile system, at the cost of scrap metal. By itself, the amount in 30 of millions of dollars is too small for Ukraine, but directly for the plant “61 of Communard” - it is pretty decent, because for twenty years of building the ship, the company has spent much more money to maintain it. During this time period, some of the equipment has already become outdated, so there is a need to either replace it or upgrade it. But this is not a problem. The problem lies in the "Basalt" complex, which can only be supplied by Russia. According to the intergovernmental agreement, Ukraine has no right to sell a cruiser with the Bazalt complex without special permission from Russia. Thus, Russia for two decades and she did not buy the cruiser, and did not allow Ukraine to sell it. Lidokhovsky also noted that at the beginning of the new century, the Russian side was already trying to buy this missile cruiser, but at that time the deal was not made. In 2005, in the framework of bilateral negotiations between representatives of the military departments of Ukraine and Russia, it was decided that there was no need to finish building the cruiser, since neither the second country nor the state needed it anymore.

A new attempt at negotiations took place in 2008. However, at that time, the then Minister of Defense of Ukraine, Y. Yekhanurov, stated that no specifics had been reached on the negotiation process. The politician also noted that Ukraine does not need such a cruiser, since it is not advisable to use it in the waters of the Black Sea, and it can only be used in the ocean. And really, what is the point of keeping a combat unit capable of hitting any target with the help of standard weapons, without departing from the pier? Therefore, it is much easier for Ukraine to maintain the cruise armament subdivision, rather than spend money on the completion of a very expensive ship.

Then the main problem was precisely in arming. The fact is that the unfinished five percent consisted of the most powerful anti-ship missiles of the P-500 missile complex Basalt, as well as the naval version of the C-300F anti-aircraft defense system. These systems are produced in Russia, but Ukraine could not buy them due to certain circumstances: the fact is that armament with a range of 500 kilometers is prohibited for sale. A warship without weapons is nothing more than a big barge. In the 2010 year, however, also failed to agree.

In the 2010 year, information appeared again that Russia intends to buy the cruiser Ukraine and complete its construction, since Ukraine is unable to do so. This was stated by the Ukrainian President V. Yanukovych. The Russian representatives confirmed this statement, stressing that a cruiser of this class could become part of the Russian fleet, because it already has three similar vessels.

In the same year, the Verkhovna Rada of Ukraine adopted a resolution abolishing the assignment of the name "Ukraine" to the missile cruiser. In the explanatory note to this resolution it was noted that such a name is not appropriate, since neither the completion of the vessel, nor its adoption by the Ukrainian Navy is not provided.

In 2011, Anatoly Serdyukov, the then head of the military department in Russia, said that Russia was ready to take a cruiser for nothing, not even at the cost of scrap metal. Only then can the options for the participation of Ukrainian enterprises in its completion be considered.

As for the current negotiations, there is information that the Russian side intends to tow the ship to Severodvinsk for inspection, after which it will be decided either to complete it or to convert the ship to a special-purpose vessel. Russian shipbuilders are ready to prepare the necessary bill by the end of this year, suggesting Poltava or Izmail as variants of the names. It is also possible that the cruiser will eventually become a source of spare parts for the three cruisers, which are already in service with the Russian Navy.

Ctrl Enter
Noticed oshЫbku Highlight text and press. Ctrl + Enter
We are
World MIC - who is in the topAre there any prospects for the Ukrainian military-industrial complex?
Military Reviewin Yandex News
Military Reviewin Google News
264 comments
Information
Dear reader, to leave comments on the publication, you must sign in.