Will Ukraine retain the status of a reliable supplier of military equipment? 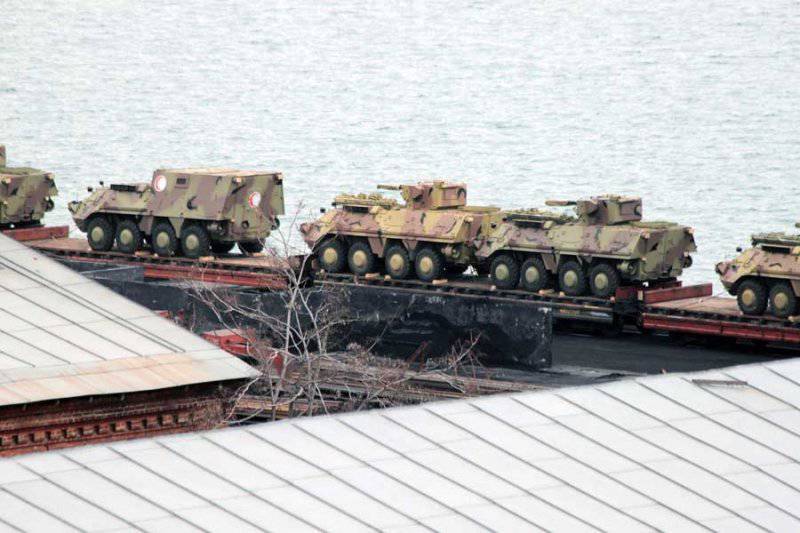 It is known that Ukraine is one of the world's largest suppliers of weapons. Most of the money in the treasury of Kiev comes from the sale of modernized armored vehicles of the Soviet sample. The Kharkov factory of a name of Malyshev is one of leaders of the Ukrainian military-industrial complex making heavy and light armored machinery, including engines for fighting vehicles and spare parts to them.

Back in 2009, official Baghdad signed a contract with Ukrspetsexport for the supply of a very large batch of military equipment: armored personnel carriers, aircraft and tanks. The deal amounted to about $ 2,4 billion. Most of the obligations under this contract were undertaken by the Malaysians - they needed to produce 450 BTR-4 units. Deliveries began in 2010, shipment was carried out in small batches. During this time, 100 units of armored personnel carriers were transferred to the customer. And although the delivery took place with slight delays, both parties believed that the contract was being carried out normally. The Ukrainian side is very interested in the full implementation of the contract, since competition in the arms market segment is very fierce, and Kiev would like to retain the position of a reliable supplier.

And, of course, for Ukrainian exporters, the fact that the Customer refused to accept a batch of armored personnel carriers, in the number of 42 pieces, which arrived in one of the ports of Iraq, became a real tragedy.

So, in March 2013, in the port of Odessa, military vehicles were loaded onto a Singapore Pacific Se vessel leased by Varamar. 26 April ship moored off the coast of Iraq. Iraqi customers refused to accept the goods under the pretext of found defects in the body. Negotiations between the two sides were held for three long months and all this time the ship was in neutral waters near the Iraqi shores, despite the fact that on board was also metal intended for an Indian customer.

The Iraqi side claimed that there were cracks in the corps of armored personnel carriers, which were smeared with paint, so they would not accept such equipment. And in this regard, the customer had a reasonable doubt that the equipment was new and not modernized old.

At the same time, the Ukrainian side believed that the equipment was actually accepted by Iraqi specialists, who were on the commission when loading armored personnel carriers in the port of Odessa on a dry cargo ship. About the fact that the supplied equipment is not new, but the slightly modernized Ukrainian side has kept and remains silent.

After three months of unsuccessful negotiations between the parties to the conflict, the ship, without unloading, went to the shores of India to deliver a batch of Ukrainian metal to an Indian customer.

But the problems with Ukrainian suppliers are not over. Now the Indians have made claims for a delay of three months in the supply of 70 thousand tons of metal. The Indian customer of the Ukrainian metal intends to expose penalties not so much to the supplier of raw materials as to the shipowner. According to the court’s decision, the arrest was imposed not only on the vessel, but also on the cargo, and also determined the amount of the penalty in the amount of $ 500 thousand, which should go to the accounts of the Indians. The Indian side is demanding immediate payments - otherwise, to pay off the debt, the entire cargo of the ship, including armored vehicles of Ukrainian origin, will be put up for sale in order to cover the existing costs. It should be noted that the approximate cost of one BTR is about 1 million dollars.

This current situation, in fact, forced the Iraqi representatives to agree with the reception of military equipment. But until the issue is resolved with the customers of the metal, the vessel cannot leave the coast of India.

Note that the owner of Se Pacifica was previously paid a three-month rental fee for the vessel in the amount of 1 million dollars. Ukrainian exporters: Progress, Ukrspetsexport, and Ukroboronservice do not pay the shipowner with a forced simple cargo ship. Having received no explanation regarding the payment for services, the WWS shipowner company considers it possible to unload military equipment in a foreign port. In this case, the goods will be subject to arrest. The cargo will either be returned to the exporter after the payment of the amount of the arrest, or, in the absence of payment, the goods will be put up for sale.

Kharkiv Machine-Building Plant named after Malyshev for a long time experienced difficulties in obtaining orders for their products. The contract with Iraq became a bailout for the plant, and no one could have imagined that around such a desirable deal for the Ukrainian side of the deal, there would be no comic scandal. 42 BTR instead of enrolling in the army of Iraq for three months on the ship drifted into the waters of the Persian Gulf, and then became hostages of another deal in India. Now the question was the supply of the remaining 350 armored vehicles to an Iraqi customer. The Iraqi side has the right to terminate the contract not only on the basis of the defects of equipment found, but also for violation of the delivery time. The only question is how much Baghdad itself needs a Ukrainian contract. It is not excluded that due to the change of power that occurred in April of this year, the new leadership will find it beneficial for him to cease his actions.

And although Ukrainian exporters claim that the contract continues to run in a regular mode, experts are inclined to believe that this conflict will lead to the breakdown of the contract.

Iraq will try to impose its line of conduct on Ukraine and terminate the contract. Moreover, it is assumed that it was the United States who imposed this contract on Iraq. Ukraine received this order with the assistance of its American colleagues as a "reward" for participating in the Iraqi military conflict. It is not excluded that the armored personnel carriers do not need the Iraqi army.

In the meantime, the Iraqi parliament is investigating the supply of Ukrainian armored personnel carriers. Iraqi military experts believe that the contract has a corruption component, and also assert that the equipment supplied is old, rusty and unsuitable for use. The investigative committee intends to bring the case to court against officials who have entered into this contract and are monitoring its implementation. For the time being, the case is witnessed by Iraq’s Defense Minister Saadoun ad-Duleimi.

If all the same, the Iraqi side will go on to continue the implementation of the contract, the specialists of the plant. Malysheva will eliminate the existing marriage on the spot. In this case, most likely, Iraq will try to reduce the cost of the contract due to identified defects in equipment.

It must be said that the unfolding conflict around the Ukrainian armored vehicles could harm Kiev’s plans to conclude a very favorable contract for the Ukrainian military-industrial complex for the modernization of armored personnel carriers for the Egyptian army. In order for Ukraine to retain the status of a reliable supplier of military equipment, it needs to take measures as soon as possible to resolve the multi-factor conflict situation that has been created.