U-211: Fight for survival in the half-century. Part I. Feat 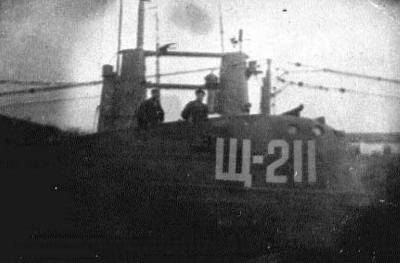 The fate of the submarine "Shch-211" was not easy. She fought and died in World War II, fulfilling her duty to the end. 60 For years, the cause and place of the death of the "Pike" was known only by the gloomy abysses of the Black Sea. The little that people knew they had to keep military secrets at dusk. Even in the official documents of that time they did not indicate what the heroes were specifically awarded for, but they sparingly wrote “for the fulfillment of the special task of the command”. Then came the victory, and the feat of the crew was adequately appreciated. In the "muddy 90-x" enemies again declared the battle "U-211". This time they tried to drown the memory of the submariners who perished on it.


Submarines of the "Pike" type are a series of medium-sized submarines built in the USSR in the 1930s - 1940s. They were relatively cheap to build, manoeuvrable and tenacious. "Pike" actively participated in the Great Patriotic War, 44 of the 31 warriors were killed. Submarines of the "Щ" type sunk a total of 27 enemy transports and tankers with a total displacement of 79 gross, on their combat account - 855% of the sunken and damaged enemy tonnage . Shch-35 was laid down on June 211, 3 at factory No. 1934 named after 200 Communards in Nikolaev, serial number 61. It was launched on September 1035, 3, and on May 1936, 5 it went into operation and became part of the Black Sea fleet.

22 June 1941 of the year Sh-211 was part of the 4 Division of the 1 Sub Brigade, based in Sevastopol and undergoing maintenance. The commander of the "Pike" was cap. leith Alexander Danilovich Devyatko. In July, the assistant commander was appointed by Art. leith Pavel Romanovich Borisenko. July 6 "Pike" went on its first combat expedition, to the position number 5 near Cape Emine, on the Black Sea coast of Bulgaria, but did not have meetings with enemy ships. The boat returned to Sevastopol on July 27.

August 5 A group of Bulgarian Communists from 1941 arrived aboard the Shch-211. Senior group was Tsvyatko Radoinov. Their task was to lead the Resistance Movement in different areas of Bulgaria and deploy mass guerrilla, subversive, intelligence and propaganda activities in the strategic rear of the Third Reich. The group was deeply conspiratorial and, in theory, no one except the captain was supposed to communicate with its members. Even the captain was “strongly recommended” not to communicate directly with the members of the group, but to resolve all the issues raised through the senior Tsvyatko Radoinov. However, the case was smooth only on paper.

The Bulgarians were extremely surprised by the irrational, in their understanding, distribution of the load in a tight “tin can”, where they were crammed under the conditions of the strictest secrecy. They knew that they would have to travel for at least three or four days and were not too lazy to distribute the load in such a way that they could get as comfortable as possible under these conditions. The mechanic of the submarine was also extremely surprised by the sudden unbalance of the ship, which suddenly "went berserk" and almost turned over at the pier. Finally, the watch took an emergency situation, keeping the "Pike" on an even keel, and the saboteurs settled down almost like at home. The idyll was destroyed by the captain of the ship, who was resurrected by visiting guests. The saboteurs were conscious and immediately began to return everything "as it was." However, cap. leith Nine did not dare to experience fate once again. The Bulgarians were put overboard and the team itself, for the umpteenth time, redistributed the load and differentiated the submarine. Having reasoned that the safety of the ship was more important than any conspiracies, the Shuki commander distributed the "guests" evenly in all the rooms of the submarine. The Bulgarians made friends with the Soviet crew and, until the end of their lives, spoke about Soviet submariners with great respect and genuine human warmth. The conspiracy was the best possible. 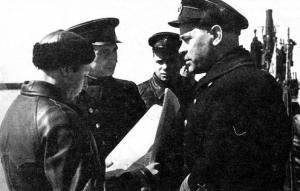 Meeting at the stern "pike" before going to sea. Cap 3 rank B. A. Uspensky far left, dressed "on marching." On the right is the commander of the 2 th DPL, captain 3 of the rank Yu.G. Kuzmin, an officer from the pike team and the military commissar of the 1-th LCL regimental commissar V.P. Obidin

Late in the evening of August 5 “U-211” set off. Providing on board went to the commander of the 4-o battalion submarine cap. 3 rank B. A. Ouspensky. The submarine reached the Bulgarian coast 8 August. Due to the strong light of the moon and the risk of being detected, the group landed three days later - on August 11, at the mouth of the Kamchiya River, north of Cape Karaburun. Of the entire group, only Kostadin Lagadinov, later a military lawyer and a general of the Bulgarian People’s Army, survived the war.

Already on August 22, members of the G.Grigorov battle group set fire to a train with fuel destined for the Eastern Front in Varna that burned 7 tanks with gasoline. In the same month in Sofia, P. Usenliev's battle group organized the wreck of a freight train with cargoes for the German army. By the end of the summer of 1941, with the help of Soviet submarines and airplanes, 55 figures from the BRP (k) illegally entered the territory of Bulgaria. In November, Tsvyatko Radoinov became part of the Central Military Commission of the Bulgarian Workers' Party (Communists). Only during the first year of the activity of the combat groups, the police reports recorded more than 260 sabotage and acts of sabotage.

The monarchist fascist police of Bulgaria did not sleep either. In pursuit of the diplomatic and political pressure of the Third Reich, Bulgaria in the summer of 1942 conducted two high-profile demonstrative trials of leaders and participants of the Resistance Movement. At the “Process of submariners and parachutists”, the Sofia Military Court gave the death sentence to 18 defendants from 27, among those who were executed was Tsvyatko Radoinov. At the Trial of the Central Committee of the PDP (k), the same court from 60 sentenced 12 to death (6 of them in absentia), 2 to life imprisonment, and the rest to different terms of imprisonment. The death penalty was executed the very next day in the dash of the School of reserve officers in Sofia.

Despite the brutal public reprisals, persecution and torture in the dungeons of the police, fighting groups did not stop resistance. Just two months after the mass shootings, 19 September 1942, the Slavcho Bonchev battle group consisting of six communists, armed with only one pistol, disarmed the guard and set fire to the Sveti Iliya cooperative in Sofia. It contained sheepskin coats produced in Bulgaria for parts of the Wehrmacht on the Eastern Front. Due to the tense situation with the provision of warm clothing for the German troops in the USSR, the diplomatic representatives of the Third Reich in Bulgaria reacted extremely acutely. The police urgently installed all the perpetrators of the sabotage, and the court obediently sentenced Slavcho Bonchev to death in absentia. However, 5 in November, 1942, in Sofia, on Ferdinand Boulevard, flashed another warehouse with warm clothes prepared for the Hitler army.

In the victorious 1943 year, the Central Military Commission of the PDU (k) was reorganized into the General Headquarters of the People’s Liberation Insurgent Army of Bulgaria, and the territory of the country was divided into 12 guerrilla operational zones. During 1943, the partisans held 1606 actions, and by the end of August 1944 - more 1909. To protect their military facilities and communications in Bulgaria, the Wehrmacht command was forced to divert 19,5 thousand. When the troops of 3-o of the Ukrainian front reached the northern border of the country, the German command reasonably decided that it was not worth defending in a country with such mighty popular resistance. Hitler's troops got out of the way and not a single Soviet soldier was killed during the liberation of Bulgaria, excluding, of course, single deaths due to careless handling of weapons and equipment, sickness and other non-combat losses. 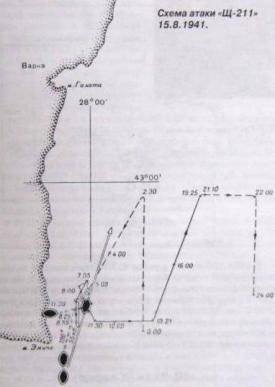 All these combat successes became possible to a large extent thanks to the efforts of the Shch-211 crew. Indeed, from 55 leaders and organizers of the Resistance Movement in Bulgaria, 11 in August, 1941 from Щ-211 ’landed 14. Having landed just one landing party, “U-211” caused damage to the Third Reich, commensurate with all the losses that Hitler's Germany suffered from all 44 “Schuk” combined.

Four days after the landing of the Bulgarian group - 15 August 1941 of the year, “W-211” opened the “battle account” of the Black Sea Fleet in the Great Patriotic War, sinking the Romanian transport “Peles” (5708 brt) near Cape Emine. In its third campaign of 29 in September of the same year, Shch-211 sunk an Italian tanker Superga (6154 brt) near the Bulgarian coast.

14 November 1941 of the year “U-211” went on a military campaign to the position number 21 near Varna, from which it did not return. The cause and place of death for a long time remained unknown.

At the beginning of 1942, the sea threw the body of a Soviet naval officer in a rubber suit on a sandy beach near the village (now the city) of Byala, north of Cape Ak-Burn (now Cape Sveti-Atanas). 6X30 Binoculars No. 015106 from 1921 was wrapped around the neck with a broken eyepiece. This officer was the assistant commander of "Shch-211" Senior Lieutenant Pavel Romanovich Borisenko. Probably at the time of the death of the Pike was in the surface position, and Borisenko, who was on the bridge of the watch, was killed in the explosion. He was buried in the city cemetery in Varna, where grateful Bulgarians are still caring for his grave today.

Both officers - the captain and his assistant were awarded the Order of the Red Banner, but did not live to see their awards. In the “description of the exploit” section, in their award lists, they wrote “for bold and decisive actions to destroy the enemy ships and for fulfilling (securing the decision of the commander in the performance) a special task”. During the war years it was impossible to disclose who, from where and in what way the organizers of the Resistance Movement in Eastern Europe send. Even in their secret award documents. 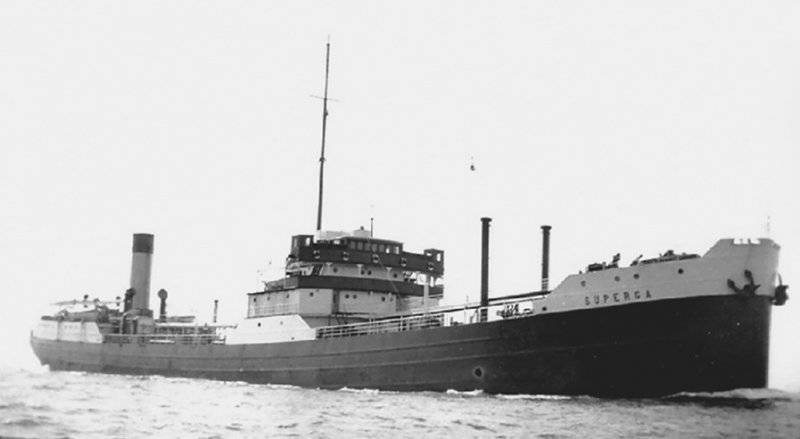 After the war, the commander of "U-211" was awarded the Presidium of the Bulgarian National Assembly with the Order of the "9 of September 1944 of the Year" I degree with swords. In the name of Alexander Devyatko, a street in Varna was named, on which a modest bronze slab with a bas-relief and the name of the hero was installed. The place and circumstances of the death of "Pike" was still unknown.

The end of the first part.

Author:
Ivan Ivanov, Bulgaria
Articles from this series:
U-211: Fight for survival in the half-century. Part I. Feat
U-211: Fighting for vitality, half a century long. Part II. Memory