Order of Evgenia Vasilyeva. Will there be a warrant? 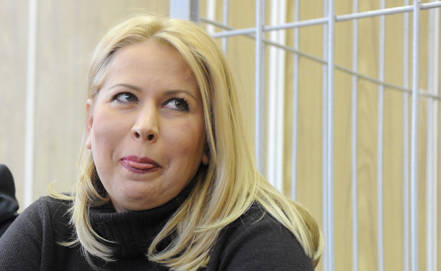 
People in the streets ask me the question: “When will they put Vasilyev in?” I want to show you a document that will formally answer it. This is a decree of the President of the Russian Federation D.A. Medvedev for number 51 from January 10 2012 on awarding state awards. I am sure that Medvedev himself did not personally know everyone.

The edict is voluminous and it includes several dozen names of the foremost workers in various fields of industry and science. But one person is well known to everyone - this is Evgenia Vasilyeva, then still the chief of staff of the Minister of Defense of the Russian Federation. And she received, according to this decree, the Order of Honor for the achieved labor success, many years of diligent work and active public work.

As an order bearer, she has a chance to spend the investigative period not in the SIZO, but under house arrest — this is your answer. 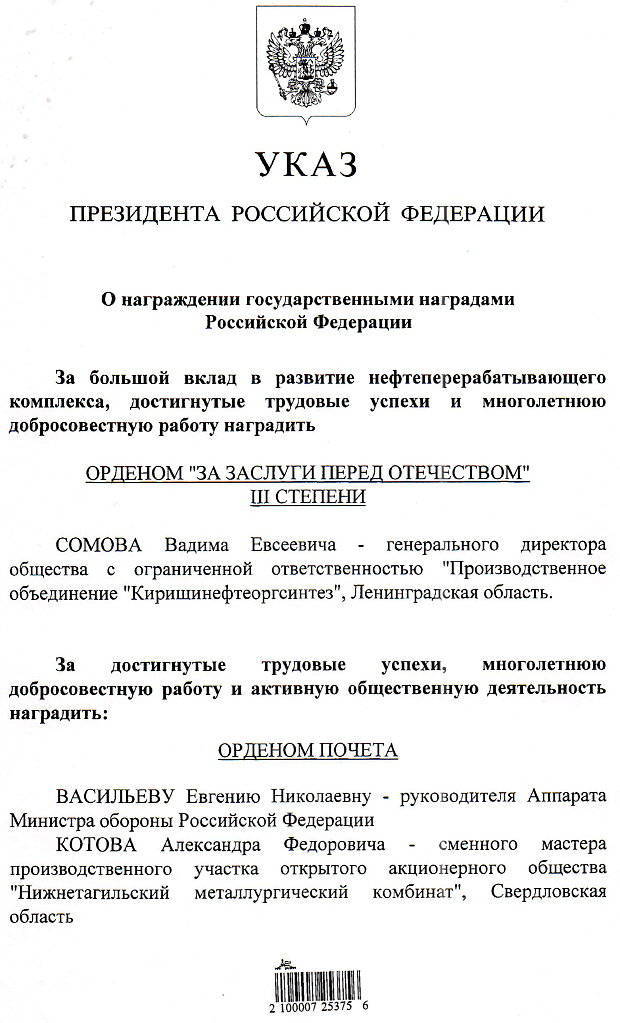 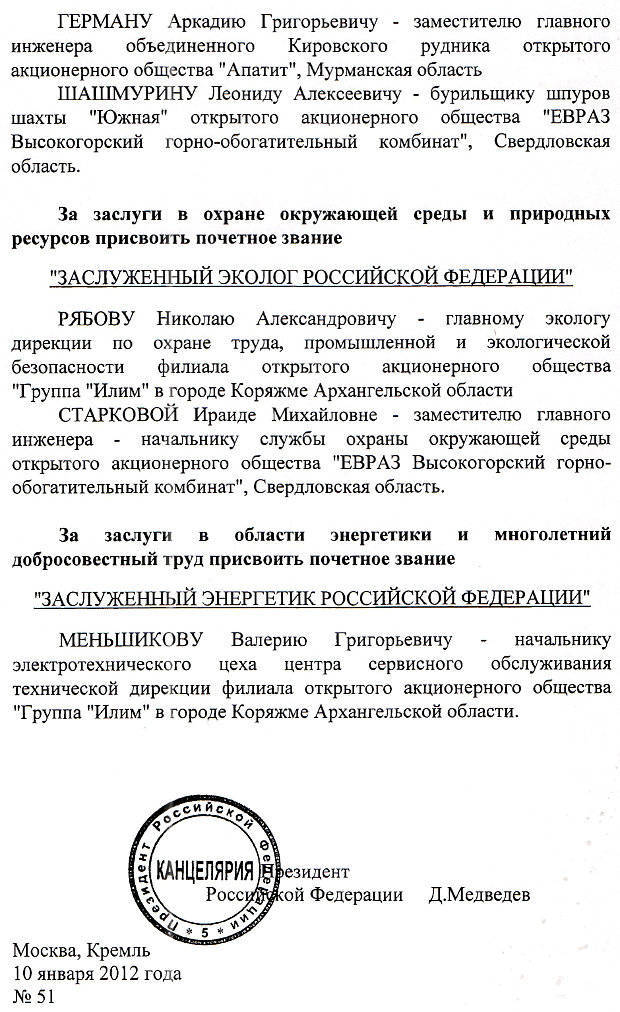 Now all of the above in the decree sounds like a mockery. Let's start with the perennial. At the time of awarding our heroine was 32 year. She came to the government in 2010 year, and until then headed private construction organizations.

I think it’s not worth raising a question about active social activities. The answer will turn out like Inna Zhirkova, the infamous winner of the “Mrs. Russia” competition, the football player’s wife, who was never able to explain to the All-Russian State Television and Radio Broadcasting Company journalist Boris Sobolev what her social activities as the owner of such a high title are.

But, of course, I was more interested in labor successes. Now the judicial system in Russia is experiencing a severe crisis of unprecedented, when each criminal case is considered without regard to the similar. For a bag of potatoes they mold perennial general regimes, and a man remains at large who has caused billions of dollars in damage to the state, that is, to the budget, that is, to me. To me personally. Me, you, your children, your parents. This damage is comparable, perhaps, only with the flood in the Far East.

There are two crazy people in Russian journalism who continue to cover this matter. This is your correspondent and Viktor Baranets, military columnist of Komsomolskaya Pravda. In the mornings, periodically, we joke with him live on the radio: which newsWhen planted, is the autumn offensive planned? And now the investigation basket was filled with two dozen criminal cases, the damage exceeded 16 billions, and our accused is still ...

In general, her term is dripping, house arrest will go to the general classification, and this matter may take several more years, and each of the identified episodes may fall apart due to the expiration of the statute of limitations. Vasilyeva has a number of episodes on the resale of the property of the Ministry of Defense. I managed to visit only one sold object. I got there under any circumstances: in the Broom talk show I tried to give out something new in this criminal case, it was still in full swing, and the people demanded spectacles. We agreed on an interview with Sergey Amelin, the owner of Stroyimpuls SMU 1.

I was surprised that Amelin generally agreed to talk to reporters. I arrived at the mansion on Bolshoi Predtechensky Lane. The mansion that once belonged to the Ministry of Defense of the Russian Federation. In front of the entrance stood a limousine owner, the office itself did not hit me with wealth and decoration. Amelin was a very pleasant, modest and charming man. Slim and shy, he clearly had heart problems, he was very embarrassed and blushed during the interview, his forehead was covered with sweat - how could such a person steer a billion-dollar business? But his company was building for the Ministry of Internal Affairs, for the FSB, and for the tax. But the main customer was MO. Only MoD transferred to him for the last year advances on 17 billion rubles.

One episode. Amelin's company Stroyimpuls SMU 1, which he owned in one person, signed a contract with Serdyukov for the construction of a complex of 50 buildings of the MO archive in Podolsk. The ministry needed such a number of buildings, like a condom to a pike — the army is shrinking, electronic document circulation, and what has accumulated can be more than placed in 10-15 modules. But that's not the point. Amelin was friends with Serdyukov, and such contracts could be obtained only "by friendship." According to the "friendship", they advanced to 100%.

Here is a fragment of our conversation: “I built a lot for the Ministry of Internal Affairs, for the FSB, and for businessmen. To say that all this is built on friendship? Hardly. There is a moment of trust and responsibility. We build, and we succeed. Of course, we earn something. But recently, trading in a similar archival building took place, another department organized them, so there the price was twice as high ... "

Let's say Amelin built cheap. But funding came in a tight stream, and that’s the key to success. Between June 2011 and October 2012, he received a billion rubles from the MO 8,1. But Amelin owned not only "Stroyimpulms SMU 1", but also LLC "Theorem". So, from this money 2,4 billion went to the account of the “Theorem” as a loan. On 1,6 billion "Theorem" Amelina bought the 4 object of the MO: a sports ground of the General Military Academy on Sparrow Hills, the Mikhailovskaya hotel in St. Petersburg, 31 GPISS shares and the building itself on Bolshoi Predtechensky. Last Amelin bought for 707 millions. The price is not just ridiculous, it is anecdotal.

Amelin drove me through the floors and tried to convince him that he was persuaded to buy it as illiquid: they say, we must help the Motherland, and that this transaction has passed state registration, and that the building turned out to be absolutely unsuitable for use, and that it would be better to demolish it and build a new one. But he cannot do this because of the security status of the building, so he suffers. However, it did not seem to me that he had suffered so much with him. The multi-storey brick building, formerly owned by OJSC "Main Directorate of Arrangement of Forces for the Armed Forces", looked quite solidly, and with insignificant investments, an excellent office center would have left it.

But to bring to mind Amelin this object did not have time. 20 January 2013, he was found dead at the cottage. 47 years. Heart attack.

Amelin was not an independent figure, and not all of the former defense real estate belonged to him personally. Friendship on the fact that there are non-paper arrangements. Until death do it. And she separated. Immediately after interrogation in the UK. It seems that Vasilyeva, who was selling all this, has stronger nerves. If she is still free, then why was Amelin so worried? You could have acted like Serdyukov’s son-in-law Puzikov, who recently gave the notorious Zhitnoye base to the Ministry of Defense. This история became news number one. But the situation with the former Ameline assets was not widely discussed.

And from sources close to me, the following became clear. After Amelina’s death, a mother and two minor children born out of wedlock claimed his inheritance. The former vice-governor of St. Petersburg, Anna Markova, became the trustee of the crown. Markova went with all responsibility to the duties assigned to her, but the heirs by hook or by crook tried to withdraw the money that was still in the accounts of Stroyimpulsa SMU-1 and Theorems.

The first company still has unearned advances totaling 10,2 billion rubles. Markova made inhuman efforts to terminate early contracts and return these funds to the state. But the main thing is that they terminated the loan contract between Theorem and Stroyimpulse, and since the above-mentioned objects were bought with these funds, these objects were transferred back to the GUOV balance by redemption agreement. 10 July documents sent to the registration authorities in Moscow. I wanted to shout: “Hurray!”

But there is another money bag - Amelina's personal accounts, and on them about 1,8 billion rubles. And it seems to me that it will be much more difficult to return these funds, but something and someone tells me that it is these products that have the persistent smell of a former friendship. Otherwise, what means the “black widow” of the late Serdyukov’s ministry is gushing in the boutiques of the capital? So, there is still powder in the flasks - in the literal sense of the word.

Ctrl Enter
Noticed oshЫbku Highlight text and press. Ctrl + Enter
We are
Gullible Serdyukov has nothing to do with itUnknown Hero of Russia - who are you?
Military Reviewin Yandex News
Military Reviewin Google News
119 comments
Information
Dear reader, to leave comments on the publication, you must sign in.