On an extremely clear awareness of the coming war

16 September 2013
40
A few days ago a post was published. The inscription on the third table Vladislav Vladyslavovich Shurygin (shurigin), in which he very vividly, capaciously and accurately described our quite probable future: “The war will be transferred to us like a plague through the fortress wall: ... all this“ darkness ”rises to our borders and falls upon us, and behind the“ darkness ”, Covering it with their latest missiles and airplanes, saturating it with the most modern weapons, the "Neo-Crusaders" will go!


You can't say more precisely, right? I note only that the word “darkness” could not be quoted. The darkness became quite real, the darkness became our everyday empiricism, having lost all metaphysical meaning. 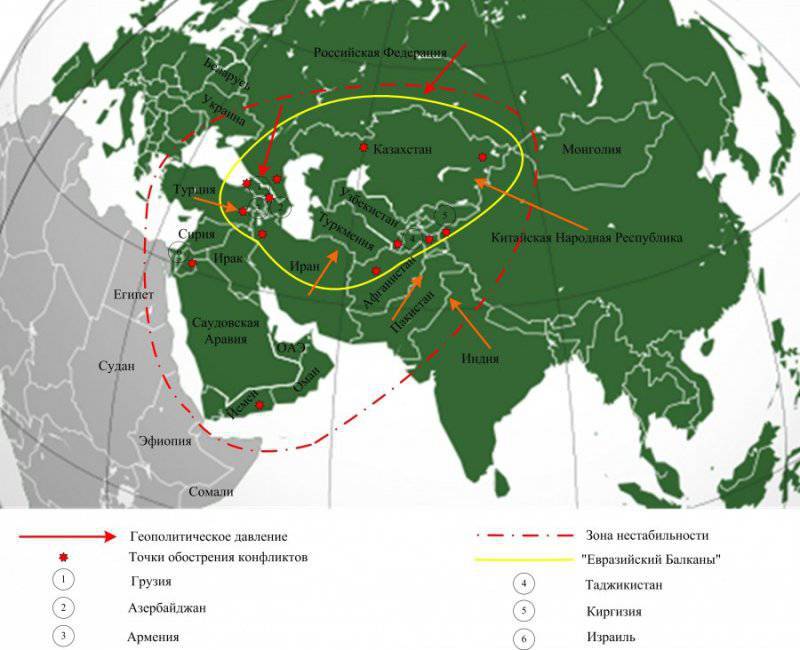 Surprisingly, of course, but for almost a quarter of a century, American hegemony did not bring peace and peace to the “Eurasian Balkans”: on the contrary, the zone of instability is expanding permanently, drawing in all new countries. This scheme, taken from the book by the American politician Zbigniew Brzezinski "The Great Chessboard", first published in 1997, is incredibly outdated. Largely due to the verified and precise policy of the world hegemon ...

But the darkness has not yet come to our borders, therefore, we can try to hold it at distant approaches, counterattack in all environments — on land and at sea, in the air and space, in cybernetic and information spaces! You can grind the avant-garde there, in the "zone of instability" around the "Eurasian Balkans" (in the terminology of the theorist of this instability - Zbignev Brzezinski)!

In this regard, a quite reasonable question arises: how can our country help Syria? How could we beat the enemy there, thousands of kilometers from our borders?
Answering this question, it is necessary, as it seems to me, to raise the guiding documents of those very "neo-Crusaders", these "masters of darkness." In the Western, or rather, in the American military terminology, there are two very interesting concepts:

- the threat of accessibility to the area of ​​warfare (anti-access challenge) - these are factors that hinder or completely prohibit the penetration of troops into the area of ​​military action (factors may be geographical, military or diplomatic);

- the threat of counteraction within the areas of conduct of military operations (area denial challenge) are the factors affecting the ability of troops to effectively carry out their combat missions (in essence, this is the technical and technological ability of the enemy to stifle the actions of the US military).
As part of the study of this issue, the US Army Command even ordered a separate study of one of the world's largest think tanks - the RAND corporation (see the report "2013," The Army's Role in Overcoming Anti-Access and Area Denial Challenges ").

So, based on the analysis of the governing documents and research works, it can be argued that Russia has a serious potential to significantly reduce the likelihood of the onset of foreign aggression against Syria. Another question is that, by moving in this manner along the razor's blade itself, we can one day get several carrier strike groups near our border or even join another world. By the way, I do not rule out such a scenario, when they will punish us for a position on Syria by purely economic and informational means, causing destabilization of the internal political situation that could lead to a change of political regime. As the wonderful Russian writer Alexander Prokhanov noted in one of his speeches, "the Syrians themselves said that they understand that Russia will not start a world war because of them."

So how can we help Syria?

From the point of view of the “threat to the accessibility of the area of ​​military operations”, these are, of course, diplomatic means: active work on the UN Security Council’s platform, as well as holding bilateral talks with all countries located in the region, primarily the Islamic Republic of Iran, or measures depending on the region, for example, the People’s Republic of China and Japan. The intensification of diplomatic work with Muslim countries - the position of the President of Indonesia, voiced during the G-20 summit, came as a complete surprise to our President, as was the position of the political leadership of India. So, we still have room to fight, and we can maneuver, look for new allies.

In addition, we provide the transit of cargo and military equipment, and in the near future we will probably ensure the withdrawal of American troops from Afghanistan - a very painful topic for them, and we should not forget about this either.

If we talk about the military and geographical factors that can prevent the access of "neo-Crusaders" to the area, then everything is much more complicated. There can be no geographical interference, however, from the point of view of military resistance, we could provide the Syrians:

- additional supplies of weapons of all types, by signing relevant agreements;

- military instructors who are able in a short time to train the staff of the Syrian army to work on the most modern Russian equipment and counterguerrilla actions;

In essence, we could raise the archives and see what Comrade Stalin was doing when he defended the interests of the first proletarian state in the world on distant approaches - in the struggle for the freedom of Spain!
However, the most effective, in my opinion, would be the signing of an additional agreement with the Syrian government and the rapid deployment within the framework of this agreement of parts and units of air defense required under the conditions of probable intervention to protect Russian military facilities - the same point of logistics of the Navy ships. At the same time, the “civilized world community” will have to be made clear that, in conditions of tension, any unidentified target within the range of the air defense weapons will be confused - as an object representing a threat to the Russian military (citizens).

What is the affected area for the C-300 complex: from 5 to 150 kilometers depending on the modifications? And for the C-400 complex - all 400 kilometers? I will note that according to the information in the Atlas of the Officer reference supplement, the length of the entire Syrian coastline is the entire 173 kilometer. Thus, we could, albeit purely speculative, close a significant part of the territory of Syria from the attacks of sea-based and air-based cruise missiles. But this is only in theory.

To talk about another important tool for preventing aggression against Syria is essentially not to form an operational squadron: according to media reports, it is already slowly coming together. Of course, this will not be the famous Mediterranean squadron, but it will certainly become a factor.

From the point of view of "the threat of counteraction within the areas of conduct of hostilities," then in this case, as follows from the statements of the American military-political leadership, there will be no ground phase. Consequently, the struggle with the new force will unfold between the subjects already present in the clearing - government troops and gangster formations of all stripes and breeds brought, apparently from all over the world.

I believe that most of what has been said above is already being implemented: it is likely that negotiations are currently under way for the supply of additional parties. weapons - first of all necessary to repel an air strike and fight against bandit formations; probably, the Syrian military is assisted by our specialists - representatives of industry and military experts. Probably, intelligence is also not asleep, and will report at the right time about the rapidly approaching killer bombers.
However, let's repeat the key question: how could we help Syria? But how can we ourselves not get into the thick of war? How to push the "day of the coming of darkness under the walls of our fortress" for as long as possible?

In my opinion, the way out lies not in the military plane, to a greater extent today we are talking about the struggle for the minds, for the consciousness of the masses of people! The fight goes on in the information space, the fight is on the air and on the pages of the world's leading media. It is in this plane that we must finally learn to fight, to fight for real! Imagine a situation where, after the G20 meeting, the leaders of many other countries, for example, Vietnam, which remembers carpet bombing, defoliants and napalm bonfires, Algeria, which itself hangs in the balance of events in Syrian or Egyptian, would follow the example of the leaders of India and Indonesia. the script. Interestingly, how does the German public relate to possible US aggression against Syria — the Germans, one of our key economic partners, understand very well their strategic position in the world against the background of the presence of American military bases on their territory.

Imagine just for a minute that the slogan of Comrade Ernesto Guevara de la Serna (Che Guevara), adapted to the conditions of the struggle in the information space, worked out: “Let's create two, three, many Vietnam!”? And each of these “vietnams” would be decorated in a single information key, that is, planned according to place and time, verified, became an element of the very new type of weapon - the organizational weapon, which the United States has so successfully used for many years.

Ctrl Enter
Noticed oshЫbku Highlight text and press. Ctrl + Enter
We are
Brzezinski predicts the imminent decline of America?Chechen trace of Mr. Surkov
40 comments
Information
Dear reader, to leave comments on the publication, you must to register.