What Syria does Israel need? 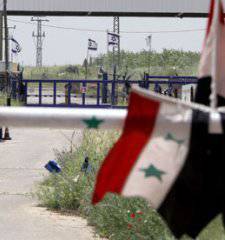 Only 20 percent of Americans agree with the statement that the US refusal of military operations in Syria can strengthen the position of other rogue states. These are the results of a survey conducted yesterday by the Associated Press. The survey showed, however, that most Americans oppose even a limited operation in Syria. The position of the majority of American citizens is in conflict with the assertions of the Washington administration that ignoring what is happening in Syria strikes the US national interests. 53 percent of respondents also fear that a strike on Syria could lead to a protracted military conflict and the entry of American troops into Syrian territory. According to analysts, the survey reflects the tiredness of American society from a series of military conflicts in the Middle East.


The White House administration said yesterday that it was “skeptical” of the Russian initiative to transfer Syrian chemical weapons under the control of the international community. “Potentially, the Russian initiative could be a breakthrough,” Barack Obama said in an interview with NBC yesterday. “But, given the situation that has developed in Syria over the past couple of years, we have to remain skeptics.” Although the United States, according to Secretary of State John Kerry, will consider the proposal of Russia, the White House is not going to abandon its plans to get support for the military operation in Congress. Kerry added that his comments on the conditions for refusing to strike on Syria, which he gave the day before, were “rhetorical” and should not be perceived by the Russian side as a proposal. According to White House press secretary Jay Carney, the presidential administration did not like the hasty the reaction of Syrian Foreign Minister Walid Muallem, who approved the initiative of Russia.

Meanwhile, Israeli experts recall that, although the Assad regime is associated with Iran and Hezbollah, the Syrian rebels are mostly not supporters of democracy, but are groups directly supported by Al-Qaeda and the Muslim Brotherhood. Israel’s policy towards Syria today is to refrain from being drawn into the conflict (provided that there is no immediate threat to the security of the Jewish state).

An important question that is occupied by analysts is whether there are any forces among the Syrian opposition that are inclined towards dialogue with the West and are not radical Islamic fundamentalists.
“It is impossible to accurately determine the balance of power between jihadists and supporters of secular power among the Syrian opposition,”
- Professor Itamar Rabinovich, a former Israeli ambassador to the United States, said in an interview with The Jerusalem Post. Rabinovich argues that the secular opposition in Syria should not be written off and far from the fact that after the fall of the Assad regime, radical Islamists will come to power. “If the West participates in the conflict, it will be able to strengthen the positions of secularists,” he believes.

“What is better for Israel,” Rabinovich asks a rhetorical question, “to deal with the axis of Assad — Hezbollah — Iran or with a victorious opposition, among which Islamists can dominate?” Syria is not Sinai, where Islamists act, but Israel does not interfere there, because it respects Egyptian sovereignty. In Syria, Israel may well act against the Islamists. ”

GLORIA Center Director Barry Rubin believes that the civil war in Syria is at an impasse, neither side has a clear advantage and this situation, provided that there is no external intervention, can last for years. Israel, Rubin believes, should be in a Syrian conflict worry about the following: the US willingness to fulfill its obligations; Iran’s policy on its atomic program (which will also depend on US actions in Syria); what forces will come to power after the overthrow of Assad; the fate of the syrian chemical weaponswhich can get to Hezbollah. What remains important is the question of what policy Iran will pursue with respect to Syria, Rubin said. Will Iran seek the victory of Assad or will it satisfy the division of the country between the opposing factions - provided that it maintains access to the Mediterranean Sea in its zone of influence? Rubin does not exclude the possibility that the parties to the conflict may come to a decision on the division of the country by mutual agreement.
“In any case,” he emphasizes, “the American military action will not lead to an end to the civil war.”

"The Islamist opposition in Syria can be divided into three main groups," stresses Jonathan Speyer, a researcher at the same GLORIA Center. - Close to al-Qaeda; not directly linked to al Qaeda, but opposed to democracy and liberal values; Salafis occupying a somewhat autonomous position. ”

“The most powerful opposition grouping is the Syrian Islamic Liberation Front. I, as a specialist in Syria, can argue that this grouping cannot be called a democracy. In its ideology, it is closest to the "Muslim Brotherhood", "
- notes Spayer. The researcher noted that among the opposition forces there are supporters of secular views, but they obviously do not play a leading role there. The goal of the United States in the upcoming operation should not be the fall of Assad, but the weakening of Iran’s position, the expert believes. British analyst Charles Lister recalls that those representatives of the opposition, who in the West are considered moderate or even supporters of democracy, are such only by Syrian standards, but by no means by Western ones. Some of them say, for example: we are not against free elections, but Sunnis should hold all positions of responsibility, Christians should not be allowed to rule at all. “The opposition is a conglomeration of temporary tactical allies, many of whom are irreconcilable ideological rivals. If the opposition wins, the conflict between its various factions will almost certainly not be avoided, ”Lister notes.

Ctrl Enter
Noticed oshЫbku Highlight text and press. Ctrl + Enter
We are
A great interview with Sergey Lavrov: about Ukraine, Obama and IranWhat you didn't want to know about England
Military Reviewin Yandex News
Military Reviewin Google News
27 comments
Information
Dear reader, to leave comments on the publication, you must to register.