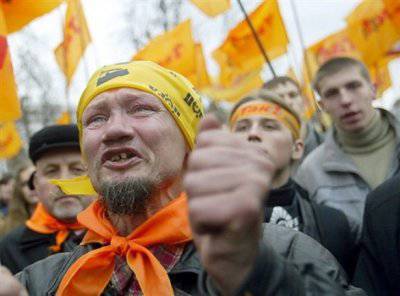 Recognized as the ideologist of the Orange Revolution Gene Sharp he received his doctorate in philosophy for work "non-violent means of overthrowing regimes» (1964). Actually, this is a collection of methods for political, economic and civil sabotage that can be used against any country, non-violently leading it to destabilization and civil strife, and thus giving rise to the protection of the “human rights” of world democracy, including humanitarian intervention by the United States.


Therefore, it would be more correct to call Sharp a doctor on ideological diversions, and the successor of Lev Trotsky, whose follower Sharpe was in his youth, and it seems that he creatively reworked his world “permanent revolution”. Sharpe’s close ties with the RAND Corporation and the National Endowment for Democracy (USA), led by Senator J. McCain, a fan of rocket-bombing in the name of democracy, promise many discoveries to their researchers.

Sharp’s methodology for developing and operating the Orange Revolutions “From Dictatorship to Democracy” is a common instruction, that is, an information program that initiates and supports destructive processes in an attacking country, but uses natural processes in it and is based on specially fabricated and supported Media myths.

However, that which has an artificial origin can be annihilated (destroyed) by a counterprogram specially developed for this purpose. In principle, just as it is done in programming. The “marshland” events in Russia and the “witnesses of Navalny” at the last Moscow elections suggest that the development of a program to annihilate the orange program has become an urgent need.

To develop such an annihilation program, probably, under the strength of an institution similar to the Sharpovsky Albert Einstein Institute. (And here Einstein?) For example, the Institute named after Mikhail Lomonosov. But why not try to write it, bearing in mind the scientific method of trial and error, as a prototype? Which can then be refined and supplemented. We present it thesis, in a brief form, that is, without detailed evidence that can be presented in the future as necessary.

It is obvious that in the first place should be exposed the main myths that underpin the Orange program, that is, you first need to attend to the ideology of annihilation program.

The myth of the "democratic" Orange Revolution. This is not a democratic revolution, that is, allegedly a “people” leading to power; there are no such revolutions in nature, people are always in revolutions, as shown историяIt turns out to be the ultimate scapegoat. Popular uprisings that set fire to the revolution. What then is this revolution?

The Orange Revolution is a demagogic revolution, or a revolution of demagogues (“leading people” - ancient Greek), this is oclocracy - the power of the crowd under the influence and control of demagogues who manage to “ride” the crowd for a while, is very insignificant. Relatively recent examples of demagogues: Kerensky, Saakashvili, Yushchenko and our Yeltsin - all of them quickly took off, and fell in the eyes of their “electorate”, that is, the crowd. Philosophers of Antiquity, from Plato to Aristotle, wrote a lot about democracy as the authorities of demagogues, their works are still relevant today, therefore they are ignored by modern demagogues. They must be in demand.

An indispensable condition of such a revolution is the personality of a bright demagogue - charismatic, ambitious, unprincipled, corrupt, by the will of circumstances, and thanks to the support of interested persons who managed to lead the crowd, that is, “popular protest”. Therefore, they are trying almost to deify him, following the instructions of Sharpe, and therefore he should not be shy to expose him.

The myth of the "people", To make a revolution. The people in the highest sense of the word, historically, make the people faith, traditions, their respective worldview, historical destiny, common sacred values ​​and symbols. It is impossible to invest in the people a revolutionary program for overturning all this.

Such a program can be invested in people with broken historical, social ties, an atomized part of society, which then becomes a crowd or electorate, with special “new ideas” introduced by demagogues. And also - “the vanguard of the revolution” or “progressive part of society”; they are the “driving force” of the revolution, and not the people at all. Today, it is, for example, "hamsters", "goats" and kreakly Navalny, they do not consider themselves to be the people, and put themselves above the people.

But they do not take offense when the leader calls them “hamsters”, although this speaks of Navalny’s true attitude towards them. It also speaks of the level of their intellect: Everything is allowed to Navalny in relation to them, for he is "holy." This is a sect level that turns off a person’s critical thinking.

Newly converted "sectarians" easily perceive the simple, emotional program of a demagogue, which, in principle, is always the same: I am the best, a savior, a fighter all and everywhere, believe me, and those who oppose me and simply do not believe me - anathema!

Natural foundation The Orange Revolution are spontaneous and conflicting social processes, in which it draws its “energy of protest”. In any society there are social and economic problems, crime, corruption and just human nonsense. The demagogue promises to “solve” all of them quickly, and the immensity of such a program is the main feature of the demagogue. Inflating all problems with Sharpe’s sabotage, and throwing mud at anyone who is really trying to solve them is the main strategy of a demagogue.

In any society there are always marginals (up to 10%, according to statistics): homeless and semi-obomzh, anarchists for life, and homosexuals, who demand a holiday "here and now", as well as freedom to "culturally decompose" for others, for one boring losers in life, embittered by the whole world, and just misanthropes (misanthrope) from birth. And they are in all sectors of society, from the homeless to artists, journalists and pacifists (for example, A. Trinity, music critic and creative employee of Navalny headquarters).

This is a fertile environment for the sourdough of the Orange Revolution. It only needs to create personal security conditions for the outcasts and pay a little for participating in the “holiday of disobedience”. Therefore, the requirement of “freedom” and “protection of the rights” of any kind of “minority” is the first requirement in case of an orange “democratization” of society. Hence, the requirement of freedom of expression for the whole of society easily slips the anarchic demands of its marginal part.

Instruction: 5 annihilation steps. For ease of use, the "non-violent" coup program is reduced to five steps, follow this example.
1. “The Hook of the Revolution” - use (provoke) some scandal for a fair public outrage. Scandals in society happen all the time, as a last resort, there are always some choices. This step is probably the most important: if it is neutralized, the others lose their meaning. Therefore here - more.

As such a "hook" our belolentochniki used the presidential election in Russia 2012 of the year. The ground for it is created by NGOs for the development of a democracy with foreign funding. With their help, a “civil society”, or a civil “network”, is created, which breaks the traditional social ties and introduces the “new progressive ideas” that are inorganic to the country (the latest novelty is homosexuality). In this way they create a flock for the “new leaders” of society, and in parallel they train these future demagogues. All orange leaders, as a rule, undergo internships at US universities, and Navalny too.

The organizations, or movements, of modern demagogues are also built according to a network principle that resembles an ordinary network commercial company, such as Amway. If such a commercial company sells its always “exceptional” product in quality (for example, perfumery), then the political network company “sells” its best leader in the country, for example, A.Navalny, which is in turn an emanation of the best American model of democracy in the world .

Many ordinary networkers sincerely believe in the exceptional properties of their “product” - in “American democracy”, which can “magically” solve the problems of any country. Therefore, they are not interested in real social problems and programs; they answer the most complicated questions with banalities, such as the need for universal honesty and improved management efficiency.

All participants of the “network” are directly interested in selling the “goods” of the company, they have real dividends from it, therefore they do not perceive criticism in their address, they are aggressive in imposing their “goods” on the society. Religious scholars refer to commercial "networks" as totalitarian sects, to an even greater degree this applies to political network companies. Many observers, for example, Tina Kandelaki, note these sectarian hysterical features, and call our swamp revolutionaries "witnesses of Navalny." With good reason.

The means of annihilation here is probably the persistent revelation of fake “network products”, demagogues, the creation of a certain traditionalist counter-network to coordinate counter-propaganda work, the promotion of alternative “networks” of slogans and charismatic leaders. General therapy - propaganda of national culture, history, including their political components.

2. "Arson" - "fighting hamsters and goats" take to the streets and create a permanent rally. The security of the rally participants is ensured by the recruitment of "agents of influence" in law enforcement agencies and the government. If the Orange Revolution reached the point of "arson", then there is nothing left to do but to directly oppose "fighting hamsters and goats", to seek support in the same power structures, to mobilize patriotic forces, and bring them to the street. At this stage, it was possible to stop the “swamp” belolentochnuyu revolution in the spring of 2012, when, in opposition to the Swamp rally, a rally was organized on Poklonnaya Hill. The revolutionaries also failed to split the Putin government.

3. “Capturing the street” with other “hamsters”, “goats”, “creacles” and marginals, creating an atmosphere of hysteria through friendly media to disorient society, spread anarchy to all society and other opposition forces. In order to involve the latter, there is a demand for the resignation of power. A vivid example of such a “capture” is the Orange Revolution in Ukraine. At this point, the government can still exacerbate the situation, impose a state of emergency, if there are significant forces in society that understand the essence of what is happening. In Ukraine, the government and society at this stage of the revolution were already split and paralyzed.

4. "Sacred victim", real or false, for the charge of "power" in the brutality, and the declaration "outside the law". 5. The holding of elections, if necessary, their falsification, for this they are declared to be dishonest by the “inhuman power” in advance - this is a formal, “legal” reason for seizing power by a demagogue. The last two points act automatically; it is already impossible to prevent them legally, it is just like in chess: an inevitable checkmate in two moves.

It remains the last resort: to respond to the Orange coup d'état with another coup. To do this, there must be at least a strong leader, not inferior to the orange demagogue. The Egyptian “spring”, its revolutionary president Mursi and their tamer General Al-Sisi can serve as such an example.

Finally, the radical treatment of the Orange Revolution is achieved with the latest Indian medicine. The government of India has recently banned all foreign-funded NGOs in the country after they attempted arson. There are a lot of problems in India, more than in Russia, therefore there are less ceremonies and tolerance. The Russian law on NGOs has the courage to call them “foreign agents” ...