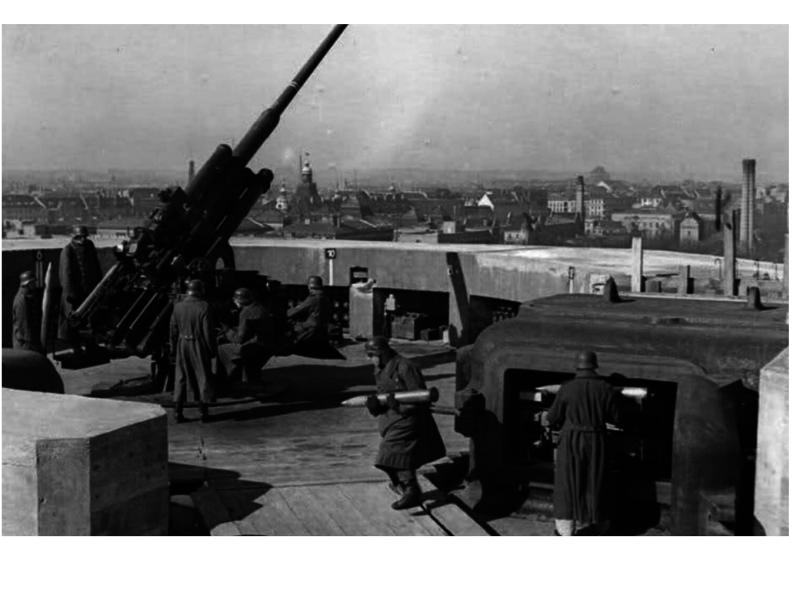 During World War II, medium-sized and large-caliber anti-aircraft artillery acquired special importance for the defense of Germany. Since 1940, the British long-range bombers, and since 1943, the American “flying fortresses” systematically erased German cities and factories from the ground. Air defense fighters and anti-aircraft guns were the only means of protecting the military potential and the population. Heavy bombers of England and especially the USA made raids at high altitudes (up to 10 km). Therefore, heavy anti-aircraft guns with high ballistic characteristics turned out to be the most effective in fighting them.


During the 16 massed raids on Berlin, the British lost the 492 bomber, making up 5,5% of all sorties. According to statistics, for one aircraft downed there were two or three damaged ones, many of which were subsequently not subject to recovery.

American flying fortresses made raids during the daytime and, accordingly, suffered more significant losses than the British. Especially significant was the raid of the flying B-17 fortresses in 1943 at the ball bearing plant when the German air defense destroyed about half of the bombers involved in the raid.

The role of anti-aircraft artillery is also significant in that a very large percentage (more than allies recognize) of bombers dropped bombs everywhere, just to leave, or not to enter anti-aircraft fire at all.

Work on the creation of medium-caliber anti-aircraft guns for the German armed forces began in the middle of the 20-x. In order not to formally violate the conditions of restrictions imposed on the country, the designers of the Krupp company worked in Sweden, in agreement with the Bofors company.


Created in 1930, an anti-aircraft gun 7,5 cm Flak L / 60 with a semi-automatic shutter and a cruciform platform, it was not officially accepted into service, but it was actively produced for export. In 1939, unrealized samples were requisitioned by the German Navy and used in anti-aircraft units of the coastal defense.

Rheinmetall was created at the end of 20's 75 mm zenith 7,5 cm Flak L / 59which also did not suit the German military and was subsequently proposed by the USSR as part of military cooperation with Germany.

Original samples made in Germany, in February-April 1932, were tested at the Scientific Research Antiaircraft Range. In the same year, the gun was put into service in the USSR, called "76-mm anti-aircraft gun arr. 1931».

Gun arr. The 1931 of the Year was quite a modern weapon with good ballistic characteristics. Its carriage with four folding beds provided circular fire, with a weight of 6,5 kg, the vertical firing range was 9 km.

76-mm designed in Germany. anti-aircraft gun had an increased margin of safety. The calculations showed that it is possible to increase the caliber of the gun to 85-mm. Subsequently, on the basis of the anti-aircraft gun "arr. 1931. Was created "85-mm tool 1938 model of the year".

Among the Soviet armament, which fell into the hands of the Germans in the first months of the war, was a large number of anti-aircraft guns. Since these guns were practically new, the Germans willingly used them themselves. All 76,2 and 85-mm guns were recalibrated to 88-mm so that you can use the same type of ammunition. By August 1944, the German army had 723 cannons Flak МЗ1 (r) and 163 cannons Flak М38 (r). The number of these guns captured by the Germans is unknown, but it can be said for sure that the Germans had a significant number of these guns. For example, the Daennmark anti-aircraft artillery corpus counted 8 batteries on 6-8 such guns, about twenty more of these batteries were located in Norway.


In 1928, the designers of the Krupp company, using elements of 7,5 cm Flak L / 60, began designing the 8,8-cm anti-aircraft gun in Sweden. Later, the developed documentation was delivered to Essen, where they made the first prototypes of guns. The Flak 18 prototype appeared back in 1931, and the mass production of the 88-mm anti-aircraft gun began after Hitler came to power. 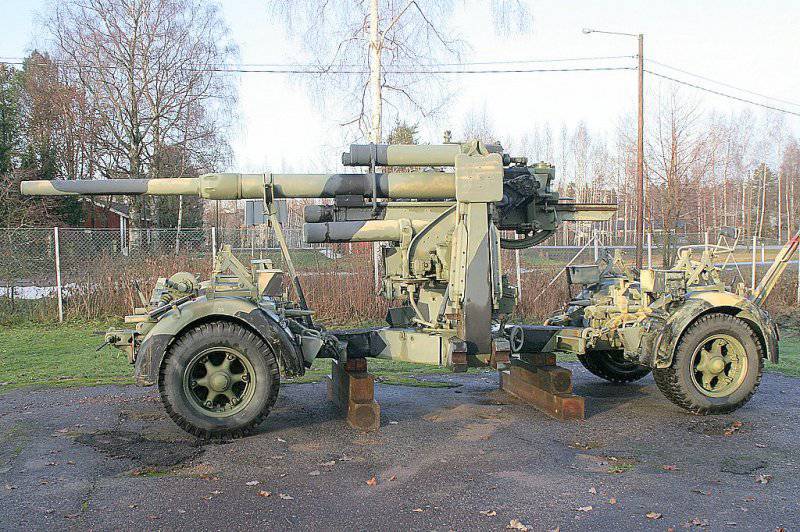 The 88-mm anti-aircraft gun, known as Acht Komma Acht, was one of the best German guns of World War II. The gun had very high characteristics for that time. Fragmentation projectile weighing 9 kg. had a reachability of 10600 m. and a horizontal range of 14800 m. 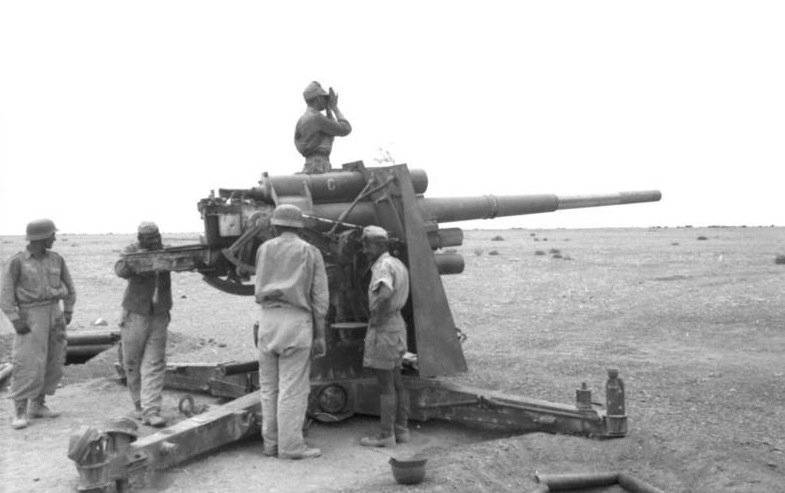 The system, called 8,8-cm Flak 18 passed the "baptism of fire" in Spain, after which a shield was mounted on it to protect it from bullets and shrapnel.

Based on the experience gained during operation in the troops and in the course of hostilities, the gun was modernized. Modernization mainly affected the design of the trunk, developed by Rheinmetall. The internal structure of both trunks and ballistics were the same.
The upgraded 8,8-cm gun (8,8-cm Flak 36) entered service in 1936 g. Later, some changes were made in 1939 g. The new model was named 8,8-cm Flak 37. 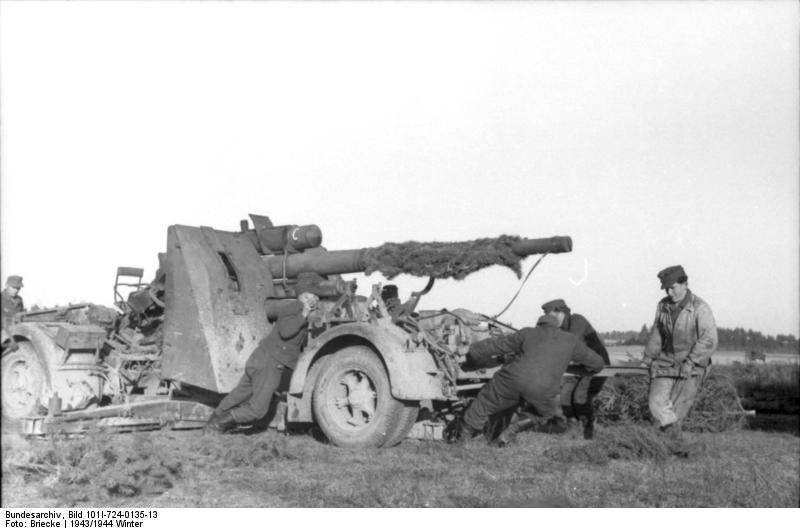 Most of the nodes of guns arr. 18, 36 and 37 were interchangeable, for example, you could often see the Flak 18 stem on the Flak 37 carriage. Modifications of the Flak 36 and 37 guns differed mainly in the mast design. The Flak 18 was transported on a lighter Sonderaenhanger 201 wheeled cart, so it weighed almost 1200 kg more easily in the stowed position than the later modifications carried on the Sonderaenhanger 202.

In 1939, Rhinemetal was awarded a contract to create a new cannon with improved ballistic characteristics. In 1941 the first prototype was made. The gun received the name 8,8 See Flak 41. This gun was adapted for firing ammunition with enhanced propelling charge. The new gun had a rate of fire of 22-25 shots per minute, and the initial velocity of the fragmentation projectile reached 1000 m / s. The gun had a swivel-type carriage with four cross-shaped beds. The mast design provided firing at an angle of elevation up to 90 degrees. The automatic shutter was equipped with a hydropneumatic rammer, which made it possible to increase the firing rate of the gun and facilitate the work of the calculation. The height of the gun was reachable 15000 meters.

The first production models (44 units) were sent to the African Corps in August 1942. Tests under combat conditions revealed a number of complex design flaws. Flak 41 guns were produced in a relatively small series. In August, the 1944 of the year in the troops were only 157 guns of this type, and by January 1945, their number increased to 318. 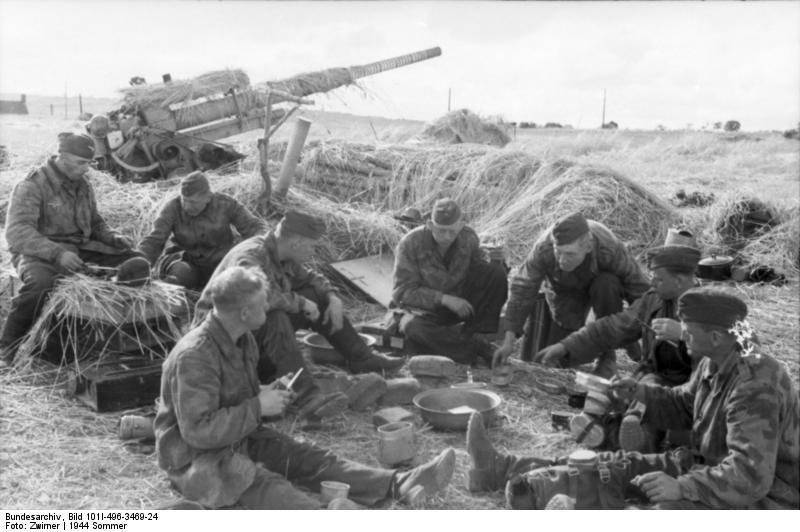 After the capitulation of Italy, the German army received a large number of Italian weapons.
For the entire 1944 of the year in service in the German army, there were at least 250 90-mm Italian anti-aircraft guns, called 9 cm Flak 41 (i). 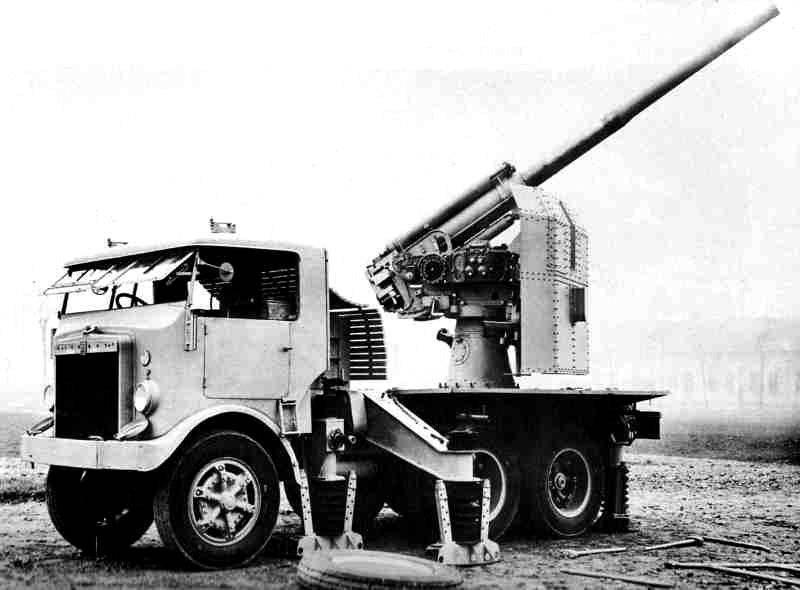 In 1933 A competition was announced for the creation of an 10,5-cm anti-aircraft gun. Firms Krupp and Rhinmetall produced two prototypes each. Comparative tests were carried out in 1935, and in 1936, the 10,5-cm gun from Rheinmetall was recognized as the best and was put into mass production under the name 10,5-cm Flak 38. The gun had a semi-automatic wedge bolt. Semiautomatic mechanical type, cocked when reeling. 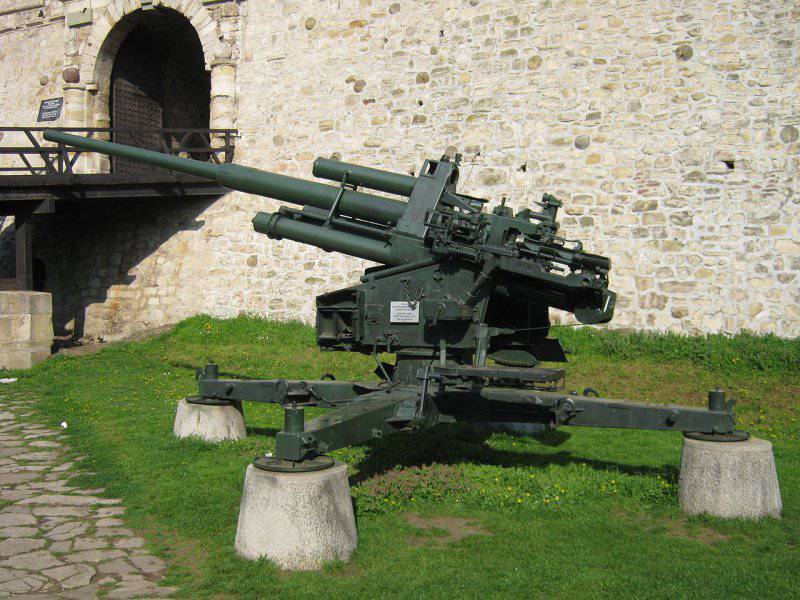 Within the framework of military-technical cooperation, four 10,5-cm Flak 38 guns were delivered to the USSR and tested from July 31 to October 10 1940 at the anti-aircraft missile test site near Evpatoria. They passed joint tests with domestic 100-mm anti-aircraft guns L-6, 73-K and land variant B-34. The tests showed the superiority of the German sample for most indicators. A very accurate operation of the automatic fuse installer was noted. However, for some reason, it was decided to launch 100-K in the 73-mm series. However, the "gunners" plant them. Kalinin never managed to do this.

The 10,5-cm gun of the Flak 38 originally had electro-hydraulic pointing drives identical to the Flak 8,8 and 18 36-cm drives, but the 1936 introduced the UTG 37 system used on the Flak 8,8 gun. At the same time, a free-tube barrel was introduced. The system thus upgraded was given the name 10,5-cm Flak 39.

The 10,5 cm Flak 38 anti-aircraft gun began to en masse in service with the German army at the end of 1937. Flak 39 appeared in parts only at the beginning of 1940. Both types differed mainly in the structure of the carriage.

10,5-cm Flak 38 and 39 remained in production throughout the war, despite the fact that according to their ballistic characteristics, the 8,8-cm guns of the Flak 41 were almost on par with them.

The guns were mainly used in the Reich air defense system, they covered industrial facilities and kriegsmarine bases. In August, 1944, the number of 105-mm anti-aircraft guns reached a maximum. At that time, the Luftwaffe had 116 cannons placed on railway platforms, 877 cannons mounted stationary on concrete bases and 1025 cannons equipped with conventional wheel carriages. The Reich defense batteries numbered heavy guns on 6, not 4, as was the case in front-line units. 10,5- see guns arr. 38 and 39 were the first German anti-aircraft guns, which were connected to PUAZO with FuMG 64 "Mannheim" 41 T radars 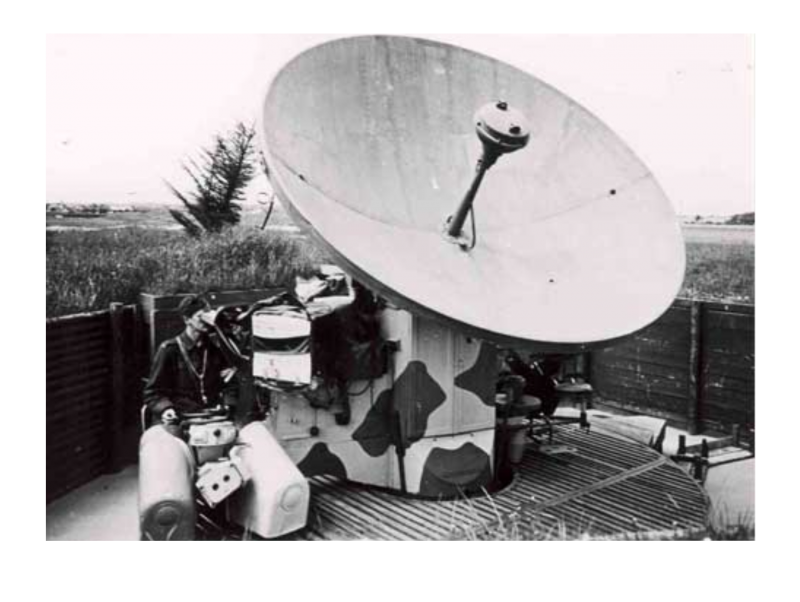 Work on the 128-mm anti-aircraft guns at Rheinmetall began in 1936 g. The first prototypes were presented for testing in 1938 g. In December 1938 was given the first order for 100 installations. At the end of 1941, the troops received the first batteries with 12,8 cm anti-aircraft guns. 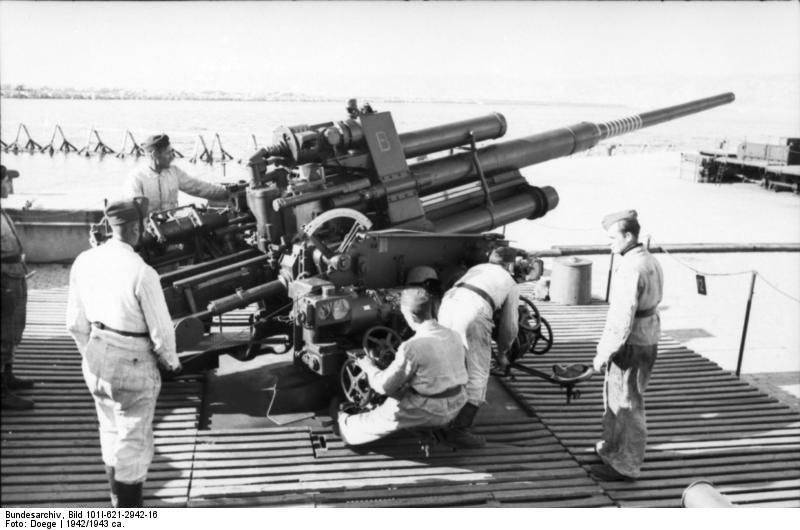 12,8-cm Flak 40 was a fully automated installation. The ammunition was sent, delivered and sent, as well as the fuse was installed using four 115 V three-phase asynchronous generators. The four-gun 12,8-cm battery Flak 40 served one 60 kW generator. 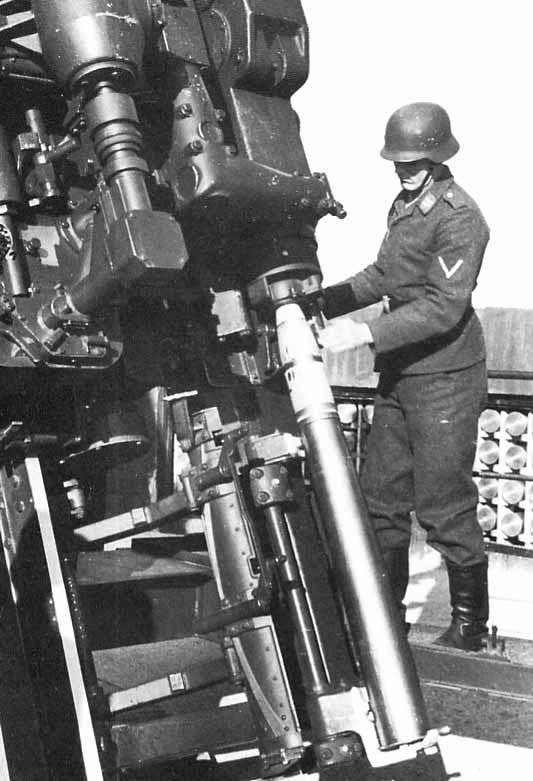 The 128-mm guns 12,8 cm Flak 40 were the heaviest anti-aircraft guns used during the 2-th World War.
With a mass of fragmentation projectile 26 kg, which had an initial velocity of 880 m / s, the reachability in height was more than 14000 m.

Anti-aircraft guns of this type were received in parts of the crigsmarine and the Luftwaffe. They were mainly installed on stationary concrete positions, or on railway platforms. Targeting and adjustment of anti-aircraft fire were made according to radar posts. 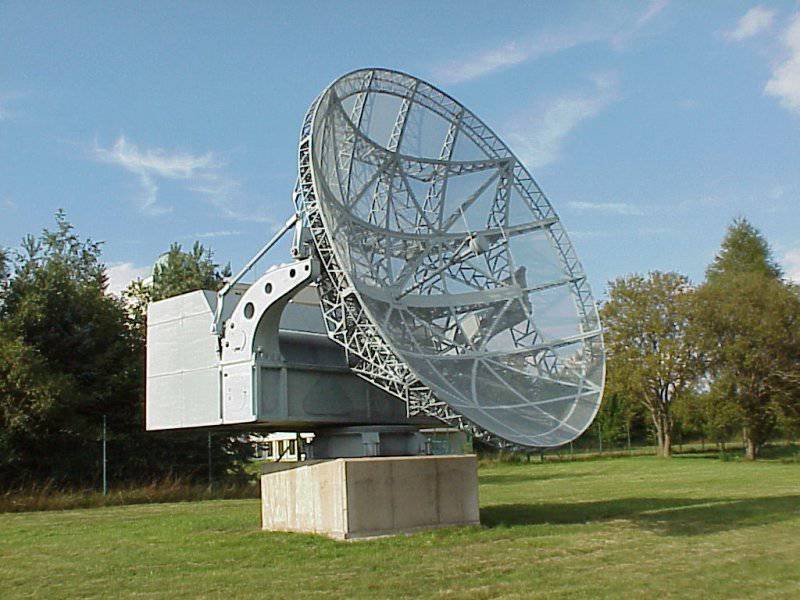 Initially, it was assumed that mobile 12,8-cm installations would be transported on two wagons, but later it was decided to restrict one to a four-axle wagon. During the war, only one mobile battery (six guns) entered service.

The first battery of 128-mm guns was located in the Berlin area. These guns were installed on powerful concrete towers 40-50 meters in height. The air defense towers, apart from Berlin, also defended Vienna, Hamburg and other major cities. 128-mm guns were installed at the top of the towers, and below, along the protruding terraces, smaller-caliber artillery was located.

In the spring of 1942, twinned 128-mm anti-aircraft guns entered service in Berlin’s air defense 12,8 cm Flakzwilling 42. When creating the 12,8-cm two-stationary installation, a base from an experienced 15-cm installation was used. 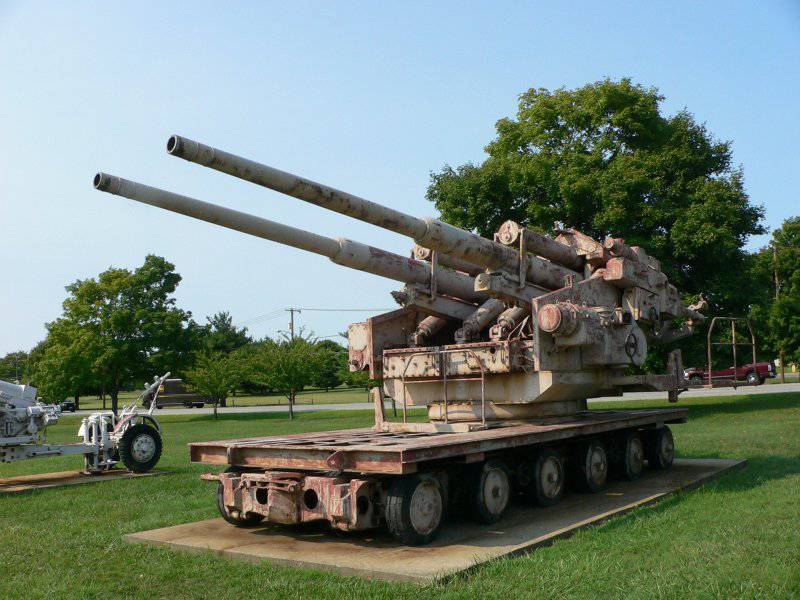 In August, 1944 was in service with 27 installations, and in February, 1945 was installed with 34. The battery had four settings.
Installations were part of the defense of large cities, including Berlin, Hamburg and Vienna.

With the advent of radar stations, shooting performance, especially at night, has increased significantly. 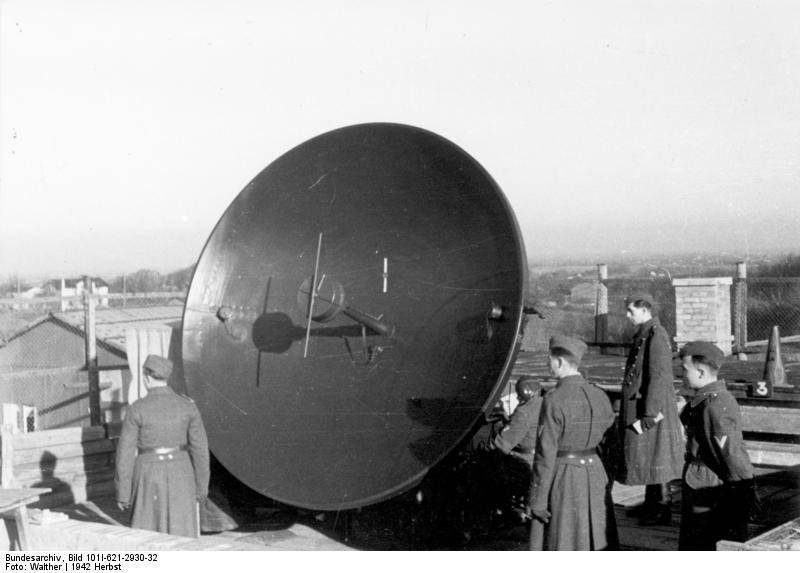 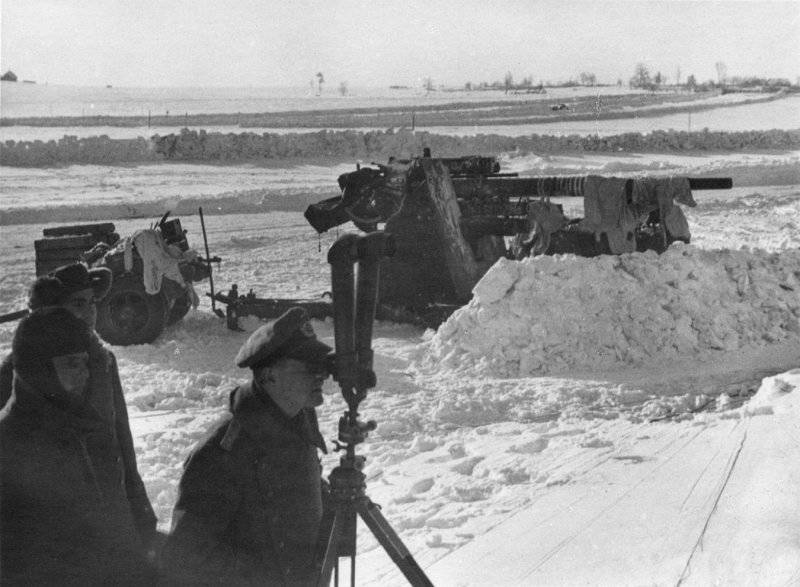 In the course of the war, German anti-aircraft guns of medium and large caliber, in addition to their intended purpose, proved to be an excellent anti-tank weapon. Although they cost significantly more expensive than their caliber anti-tank guns and were used for want of a better one. So, in 1941, the only weapon capable of penetrating the armor of Soviet KV tanks was 8,8 cm anti-aircraft guns and 10,5 cm. Of course, we are not talking about corps and RVGK artillery. However, until September 1942, when the number of 8,8-cm and 10,5-cm anti-aircraft guns on the front was small, they hit relatively few Soviet T-34 and KV tanks (3,4% - 8,8-cm guns and 2,9% - 10,5-cm cannons). But in the summer of 1944 the 8,8-cm guns accounted for 26 to 38% of wounded Soviet heavy and medium tanks, and with the arrival of our troops in Germany in the winter - in the spring of 1945, the percentage of wounded tanks rose to 51-71% (on different fronts) . Moreover, the greatest number of tanks was hit at a distance of 700 - 800 m. These data are given for all 8,8-cm guns, but even in 1945, the number of 8,8-cm anti-aircraft guns significantly exceeded the number of special 8,8-cm anti-tank guns. Thus, at the last stage of the war, German anti-aircraft artillery played a significant role in land battles.

Ctrl Enter
Noticed oshЫbku Highlight text and press. Ctrl + Enter
We are
Artillery of the Korean People’s Army. Part of 2. Self-propelled gunsGermany's small-caliber anti-aircraft artillery in World War II
23 comments
Information
Dear reader, to leave comments on the publication, you must to register.