Vladimir Putin nominated for the Nobel Peace Prize: banter or nothing surprising?

14 September 2013
166
The question “Hu from Mr Putin?” Against the background of recent geopolitical events sounded with new notes. And if the original meaning of this question was that foreign “comrades” really tried to figure out where this person came from in big politics, from what circles he was, and what to expect from him, then today everything is completely different. Today, the world is concerned with another question: to what extent can the influence of Vladimir Putin spread? 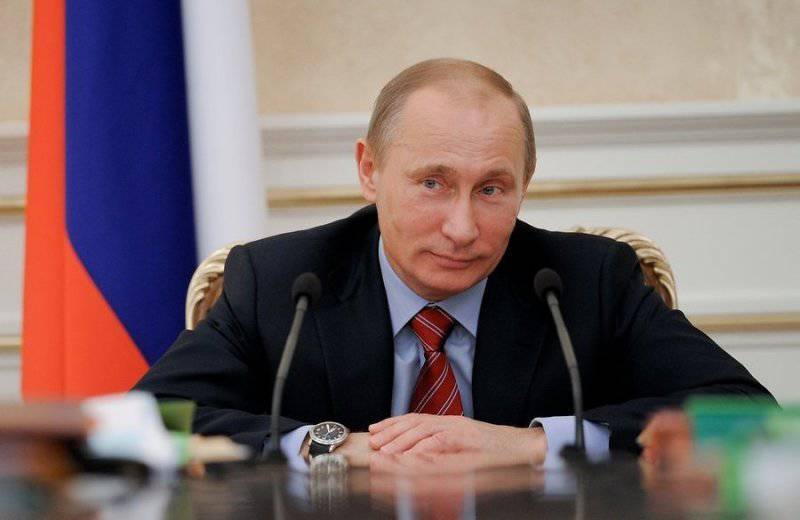 After a bright (without any exaggeration) foreign policy victory of Russian diplomacy as a whole and of the Russian president, in particular, on the Syrian direction, which consisted in hitting the nose of the furious American “democracy”, many people understood that Putin’s influence in the world is not just words, but an objective reality, from which the West itself, whether it wants to or not, has to exist today.

The halt of the giant “iron” car, which has already started its engine again, to skate through the next territory under the flag of the “rights and freedoms” victory, showed that, at least at this stage, Putin is not without difficulty, but still replays who has a different opinion about the development of the situation with the export of democracy, in particular, to Syria. Nobel Peace Prize winner Barack Obama, who, in the “best” traditions of American presidents of recent generations, does not lead his country out of permanent wars, faced with such opposition that he had to play back. What a sin to confess: over the past decades, few have succeeded in this with regard to American leaders. Why are there “few people” - no one at all!

The active foreign policy of Russia and its president, which today, in fact, leads to the possibility of overestimating the situation in Syria, which is called the whole world, was the reason for a new answer to the question: “Who is mr. Putin? ”This new response is generated by people who are ready to recognize the merits of the Russian president in the peaceful settlement of the same Syrian conflict. And this generated answer looks like this: “What if Putin is now the Nobel laureate of the peace prize? ..”

In Italy, France, Mexico, Brazil, Egypt, Australia and even in the United States today are mass actions under the slogan "We are with Putin" or "I am with Putin." Kremlin-staged performances? Instead of ordinary Italians, French or Brazilians, disguised advisers and assistants to the Russian president, who urgently and massively bought tickets to Rome, Paris, Mexico City, Canberra? .. If so, then Putin simply has universal influence ... However, the thing is that Russia ordinary citizens of these same countries thank you for her firm position on Syria in the most diverse countries of the world, who did not come out at the cross-border call of any cell of United Russia or Seliger-party, but went out to express their position - so to speak , his painful ...

The apogee of these actions can be considered an appeal to the Norwegian segment of the Nobel Committee with a proposal to consider the candidacy of Vladimir Putin for the award of a peace prize. The proposal was made, of course, not by an Italian or Mexican, but by a citizen of Russia, but a citizen from whom, to put it mildly, few people expected such a move. This man is the head of the All-Russian Education Fund, Mr. Komkov, who has recently positioned himself as an ardent and uncompromising critic of the Russian authorities. And then suddenly such a dramatic change ...

He addressed the Nobel Committee with the following letter (the letter is given in its entirety):

Dear members of the committee!

I propose to accept for consideration the candidature of Vladimir Putin - the president of the Russian Federation - to the award of the Nobel Peace Prize.
Vladimir Putin has shown in practice his commitment to the cause of peace. Being the leader of one of the leading countries of the world, he makes maximum efforts to preserve peace and tranquility not only in the territory of his own state, but also actively contributes to the peaceful settlement of all conflicts arising on the planet.
This is especially pronounced at the present time, when all of humanity with bated breathing is watching the events in Syria.

As Chairman of the G20 State Summit, held in St. Petersburg 5-6 September 2013, he managed to convince the overwhelming majority of the summit participants of the need for a balanced political decision to resolve the situation in Syria. He actively advocates the priorities of international law in dealing with any conflict situations. He was able to convince most of the participants in the G20 summit to consider the issue of resolving the situation in Syria using key international organizations. Primarily with the use of the United Nations and its Security Council.

Vladimir Putin actively advocates the right of small nations and small states to their national security and sovereignty. What is currently decisive in conducting the entire world politics.
By his personal example, Vladimir Putin is proving loyalty to the cause of peace not in words but in deeds. The focus of all its activities are not the narrow political or corporate interests of their own country, but the interests of maintaining world peace.

Vladimir Putin, of course, is a recognized world leader, a world authority, whose opinion is considered by the leaders of all states, civil societies and civil institutions.
Vladimir Putin and in earlier conflicts that have arisen in the countries of the Middle East and the Mediterranean, held a balanced and reasoned position, aimed at the settlement of these conflict situations by peaceful political methods.

Having tremendous opportunities, as the head of state, which currently has all kinds of modern weaponsVladimir Putin is not in a hurry with the use of these weapons. Looks for other possible solutions to the conflict problems and situations that arise.

This speaks of him as a wise and balanced policy, in practice, supporting the preservation of universal peace on Earth, which fully corresponds to the status of a nominee for the Nobel Peace Prize.

Sincerely, Sergey Komkov - President of the All-Russian Educational Foundation, Vice-President of the International Academy of Spiritual Unity and World Cooperation, Academician of the International Academy of Pedagogical Education Sciences (MANGO), Academician of the European Academy of Informatization, full professor (EAI, Belgium), Academician, Professor International San Marino Academy of Sciences, Doctor of Philosophy GrPhD, LL.D., writer.
As soon as this letter became available to the media, a real emotional storm broke out. People who, with just the word “Putin”, start a strange skin itch, said that Sergey Komkov simply decided, as it is now fashionable to say, to postebatsya ... Like, well, which of Putin's Nobel Prize winner, let’s better the country's economy, straighten it out and give corrupt teeth and raise industry. Other people claim that Komkov is haunted by the Kholmansky laurels, who at one time promised to help Putin disperse the protest actions, and after a while he became the plenipotentiary in one of the federal districts. In general, opinions are divided ...

The fact that the economy is not all right, the fact that corruption “tachometers” are going off the scale and the fact that the industry is not in the most impressive state is all yes, it’s foolish to deny and foaming at the mouth that our power is In this sense (and in general in all senses) the ideal. But where is the nomination for the Nobel Peace Prize? .. It is, we remind, that it is not awarded for cutting off the hands of corrupt officials, not for increasing the growth rate of the economy and not even building centers for breeding white pigeons, but, quote: “for achievements in strengthening of the world. "

Putin himself can be treated as you please; You can criticize him for sometimes strange transplantation of officials from one place to another, for puncturing the economic sector, for ambiguous reforms. Criticism has not interfered with any sober-minded politicians. But at the same time, it is somehow foolish not to admit that it is precisely “the punctual and ambiguous” Putin doesn’t actually allow to unleash another World War - a war that the entire modern civilization can reject many years ago. It is foolish not to admit that it is Russia and its president today literally breathing life into an organization like the UN, whose role has until recently been painfully reminiscent of the role of a large and much eaten (financially) statistician who is not able to solve security issues.

Is Sergey Komkov stabbed or cursed before the authorities? Well, so are his personal problems, which, by and large, nobody in the world is interested in. Another question: if Mr. Obama is a peace prize winner (as they say, laughter in the audience ...), then why not award the peace prize to Vladimir Putin. He did not unleash wars (although there is one Georgian who wants to think differently ...), did not pour bombs on people's heads, when spying on foreign leaders in the "keyhole" was not noticed, secret prisons with torture were not settled, at the sight the bloody heads of foreign states in the hands of the insane crowd did not blur in smiles. But the attempts of hotheads to solve any geopolitical issue with the help of Tomahawks always tried to stop, and in the Syrian case such a suppression was possible. He succeeded, and all Russia succeeded. All, because the overwhelming majority of Russians (at least whites, even reds, even greens, at least, do not consider propaganda, "blue" ...) opposed aggression against Syria. And when all of Russia is behind you (we will not take the “blue” in this context into consideration, otherwise we will somehow get ambiguous ...), then the position is defended more effectively and assertively.

In general, if the Nobel Committee (these pompous, powdered and well-groomed gentlemen) suddenly supports the candidacy of the Russian president (and this can happen no earlier than 2014, since the deadline for submitting applications for 2013 has already expired), then Putin will definitely have his peace prize share with all of Russia. Let it be a penny, but the point is not money, but the fact that the people here have not lost the ability to consolidate in their attitude to lawlessness. Only now, Putin for the Nobel Committee is not Gorbachev ... He did not collapse the country for someone else’s tune, did not lead to fratricidal conflicts on one-sixth land. And with respect to Russia, for the Nobel Committee, this may be the decisive option to ignore such a candidate and present the peace prize, for example, to the next LGBT activist. Yes, to Obama again ... Now, for the fact that he protects gays (in other countries), and the troops from Afghanistan is going to withdraw, and in general, that there is no discrimination based on race ...

Ctrl Enter
Noticed oshЫbku Highlight text and press. Ctrl + Enter
We are
Front lines in the Syrian conflict as contours of the future world orderSituational analysis of the death of the MH17 flight (Malaysian Boeing 777), made on the basis of engineering analysis from 15.08.2014
Military Reviewin Yandex News
Military Reviewin Google News
166 comments
Information
Dear reader, to leave comments on the publication, you must to register.