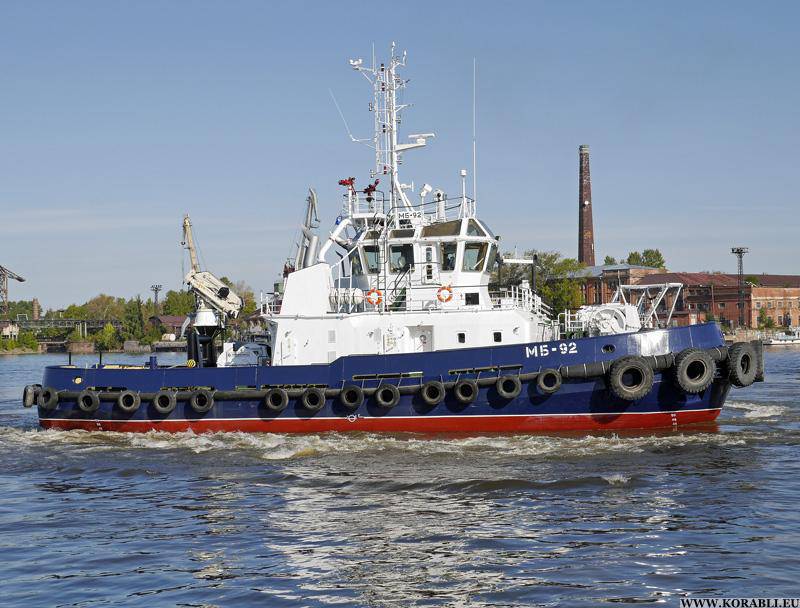 The State Admissions Committee has signed the Acceptance Act of the tug MB-92 (p. No. 503) of the project PE-65.


This is the first in a series of four tugs of the project PE-65, being built by the Pella shipyard for the needs of the Russian Navy. Previously, the tug has successfully passed state tests. Currently, the manufacturer is preparing to transport the vessel to its home base - the Pacific Fleet of the Russian Federation.

Technical parameters of the tug MB-92:

Designation of the vessel project PE-65:

towing vessels and floating structures in the open sea and port waters;
escort operations at speeds up to 10 nodes;
fire fighting on floating and coastal objects;
participation in OSR operations;
search and rescue;
breaking ice up to 0,8 m thick at speeds up to 5 nodes.

Ctrl Enter
Noticed oshЫbku Highlight text and press. Ctrl + Enter
We are
October 24 The 2013 of the year successfully completed a unique operation for loading six tugboats aboard the specialized ship HHL Lagos of the company Hansa Heavy Lift (Germany)Pella launched another tug of RB-392
Military Reviewin Yandex News
Military Reviewin Google News
14 comments
Information
Dear reader, to leave comments on the publication, you must to register.