Serdyukov summoned to the meeting 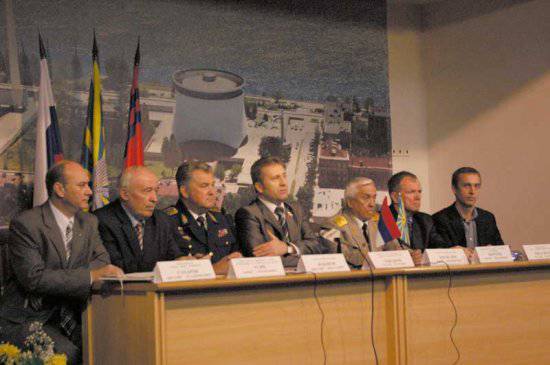 February 10 in Moscow, in the Cultural Center of the Armed Forces will be held the next All-Russian meeting of reserve officers, organized on the initiative of the Public Council under the Ministry of Defense of the Russian Federation. According to the organizers, the meeting was invited to the entire leadership of the military department headed by Minister Serdyukov. Only here, in the presence of the minister, no one is sure or who, including the organizers, is more likely to believe that he is not present. This is not surprising, given the fact that no one’s opinion about the results and methods of his leadership of the army cares about Serdyukov in principle.

In Russia, such and similar meetings of officers (mostly former) were held before. And almost always they turned into a sort of political rally, just as at first, these meetings were organized mainly by the opposition.

In 90's, the officers 'initiators' meetings were the Union of Officers, Lieutenant Colonel Terekhov, and the Military State Union of Russia, Colonel-General Ivashov. In principle, none of these assemblies had a great influence on the authorities, but it gave reason to be nervous because there were arguments on the subject: wasn’t it a precursor of a military coup?

In 1996-1998, the Movement in Support of the Army and fleet sharply opposed to the Kremlin, he was led by the extremely authoritative in the army, Lieutenant General Lev Rokhlin. Again, a new wave of talk began on the topic of a military coup. The mysterious death of General Rokhlin ended both the conversations and the anxiety of the authorities.

To avoid such outrages in the future, the Kremlin decided to take control of protest meetings of the former military. The last such meeting was held under the auspices of the Public Chamber of the Russian Federation in the autumn of 2009. It was attended by representatives of the presidential administration and the military department. But at that meeting, the Deputy Head of the Main Directorate of Educational Work of the RF Armed Forces, Major General Y. Dashkin, and several lower-rank officers were represented at that meeting. The assembly had no visible consequences, and it was organized in order to, as they say, “blow off steam”.

The 2011 collection of the year is most likely organized for the same purpose. According to the agenda, two problems will be discussed - the reform of the army and the extremely low prestige of the Armed Forces in society. Facts to discuss abound. From the number of malicious deviators who went beyond the limits of all reasonable limits, from military service to an incomprehensible decision of the Ministry of Defense for the first time in stories countries at the time to stop enrolling in military schools.

Considering the fact that lately the Russian government has dropped the social status of military pensioners and the military in general, and that the February 10 Cultural Center will be filled with representatives of this particular population, this topic will be the hottest.

At the moment, almost half of military pensioners in the Russian Federation (45%) receive pensions less than the average labor retirement pension. And at 65, thousands of retired pensioners do not even reach the minimum subsistence level at all. In this regard, Russia began a process unheard of for other civilized countries. Voluntary waivers of military pensions in favor of those paid by the Pension Fund of the Russian Federation to other citizens, are avalanche-like. In 2009, this procedure was done by 15 thousands of retirees. In 2010-m - already 27 thousands.
In the autumn of 2010, a wave of protests by reserve officers swept through the cities of Russia. The military took to the streets in Ufa, Penza, Samara, Yekaterinburg, and even a hunger strike took place in Ulyanovsk. But these protests went almost unnoticed.

Literally the other day, the reform of the pay was discussed by Russian President Medvedev. As a result of the discussion, it was decided that from the New Year the lieutenant of the Russian army with all extra charges will receive 50 thousand rubles from this amount and all other calculations will be made. Growth, as promised threefold. Military pensions will rise as well, but by a much more modest figure. 70% interest on promises of financiers. It would seem normal growth, but the output is not so much, on average, 13-14 thousand rubles, which equals the average civilian pension.

The mechanism for calculating pensions also does not inspire much optimism. In the draft law, if there is an 20-year service, it is proposed to calculate military pensions in the amount of only 30% (and not 50% as it is now) of the money allowance. For each next year, they will throw another 1,5% (now 3%). Total - no more than 48% of the money allowance (now - up to 85%), taken into account when calculating the pension. Most likely, if the option of the Ministry of Finance is adopted, the question of preserving experienced personnel in the ranks will soon rise to full height before the Ministry of Defense.

Do not expect from the current meeting any constructive decisions and requirements, and the professional military invited to it themselves. For example, the chairman of the All-Russian Professional Council of Military Personnel, Captain 1 of reserve rank Oleg Shvedkov, is not going to attend the meeting at all, although he is on the list of invitees.

“Surely at the meeting will be adopted resolutions of political persuasion with slogans like:“ Down with the President! Down with Serdyukov. ” And we, the trade unions, do not deal with politics. ” - commented his reluctance to attend the meeting of the Swedes.

“You know, I well understand what Serdyukov intends to do. Moreover, I share a lot. But I do not accept what methods the Minister of Defense carries out transformations. No consistency. We form a contract army, we even disperse those professional soldiers whom we managed to recruit. Then we reduce the officers by the thousands, then by the thousands we recruit them again. In recent years, the Russian officer corps suffered heavy blows. Little of. With such reforms we raised a dangerous category of commanders. They all do with an eye on their superiors. And through those who are below, through their subordinates, they step over easily. We lost a normal officer over the years.

In addition, I am very concerned about the enthusiasm of the Ministry of Defense with all sorts of material and financial issues. Type of division of real estate and land. Just look at what is happening today in the old building of the Defense Ministry of the Russian Federation, where Marshal Zhukov once sat and where his memorial room is located. There, it seems, there was not a single military. Solid OAOs generated by Serdyukov. The General Directorate of Educational Work was thrown out of the most famous building on Arbat, ”also said the captain Shvedkov.