The war between Ukraine and Russia: is it possible? 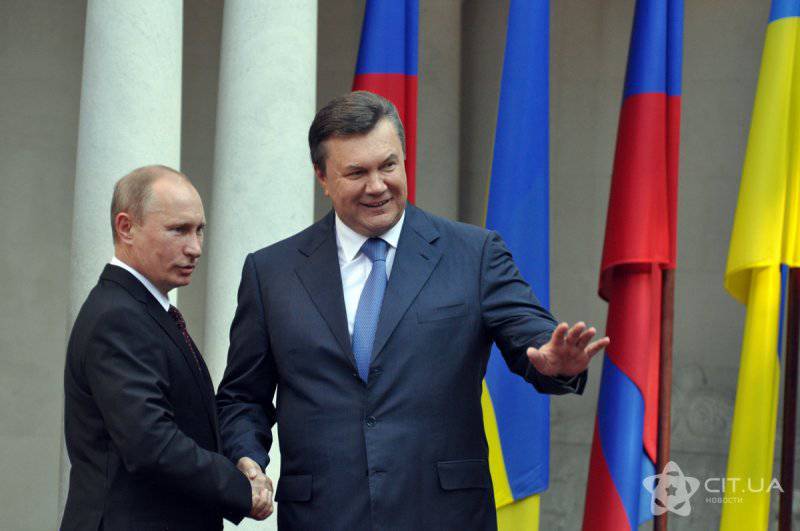 Once again, a rather classical situation develops in relations between Russia and Ukraine, when the East opposes the West. Ukraine, which had been in the shadow of neighboring Russia for a long time, should sign the Association Agreement, a document that is significant for the Ukrainian state, at the Vilnius summit in a few months. Of course, the signing itself is not a guarantee that Ukraine will become a full member of the European Union. At the same time, this document guarantees the reshaping of European borders, and the withdrawal of Ukraine to the west.

It should be remembered that, starting from 2010, Russia has been creating its own community - the Eurasian Customs Union, in which the participation of the former Soviet republics - Kazakhstan, Belarus, is expected. At the same time, the Russian government strongly recommends Ukraine to join it. The customs union is supposed to be created as a kind of diplomatic and economic counterweight to Brussels. But since there are large disparities between the members of the Customs Union in terms of power and size, it is clear that the most important decisions will be made in Moscow. That is why Hillary Clinton, the former Secretary of State of the United States of America, saw in the creation of the Eurasian Union the attempts of the Kremlin to return the post-Soviet territories, called this community a step towards re-Sovietization of the region.

Ukraine, which has many years of history bilateral projects with Russia, has little desire to join this alliance, which is understandable. The Ukrainian government publicly declares that it intends to develop relations with Europe, using for this the support of the majority of the Ukrainian population. Moreover, the Ukrainian authorities want to implement their intentions in the near future, in November of this year, by signing an agreement with the EU. At the same time, Moscow does not leave attempts to convince Ukraine that in fact the place of the country is in the East.

Hence the tightening of customs procedures. Moreover, representatives of the Russian government without reserve say that such events are caused by the desire of Ukraine to Europe. So, another 18 of August of this year, said Sergei Glazyev, adviser to the head of the Russian state on the development of the Customs Union. The fact that such threats are not empty words is evidenced by the use of punitive trade sanctions. The first blow was delivered to the products of the Ukrainian confectionery corporation Roshen, which manufactures chocolates in a large assortment. Despite the fact that this company for many years, starting with 1996, has been supplying sweet products to Russia, as well as the fact that Russian experts have repeatedly inspected it, the management of Roshen was informed that for supplies of Ukrainian products in Russia imposed a ban. The reason was called banal - improper processing of raw materials in the production. Soon, Belarus and Kazakhstan joined this ban. Such sanctions caused the Ukrainian corporation, which is one of the largest employing companies in Ukraine, to lose more than 200 million dollars.

Shortly after the ban on the import of Ukrainian chocolates, Belarus banned the import of Inkerman wines from its factory, which is about 35 percent of the total Ukrainian wine imports. Because of this ban, the plant may suffer serious losses. The Belarusian government explained such sanctions by the fact that this product does not correspond to “organoleptic indicators”, that is, this wine does not have sufficient taste. It is noteworthy that these bans became clearer and clearer after Moscow declared the reality of Ukraine’s economic dependence on Russia, and that Moscow was ready to fully use this dependence to achieve its own goals.

Economic dependence, above all, is noticeable in the energy industry. Despite the fact that the former Ukrainian government looked towards the West and was more liberal, at the time Yanukovych came to power, Ukraine depended on Russia to the maximum. After negotiations on the supply of Russian gas to the Ukrainian territory, the Ukrainian authorities agreed on deliveries at prices far exceeding those in Europe, and volumes that largely exceeded the required ones. As a result, at the beginning of 2013, Kiev refused to buy unwanted gas, for which he received a fine of 7 billions of dollars. It is quite obvious that such leaps in bilateral relations between Ukraine and Russia forced Yanukovich to look for new sources of economic growth. So, at the beginning of this year, a ten-billion contract for shale gas production was signed between Ukraine and Royal Dutch Shell.

New attempts to convince the Ukrainian government made the Russian head of state V. Putin during his visit to Ukraine in late July. Then a very cool protocol meeting and face to face talks took place between the two presidents, after which the heads of state did not even shake hands. At the same time, they could not say anything new to the journalists. Thus, it is quite obvious that Putin did not succeed in dissuading the Ukrainian political elite from European integration, therefore Ukraine should prepare for new gas, trade, church and political wars. We can not exclude the visa regime between the states.

The country, having associations with the European Union and the Free Trade Zone, will not be able to participate in the work of other unions. Therefore, it is likely that after the Vilnius summit, the most large-scale gas conflict will break out between Kiev and Moscow. Not only disputes over the volumes of Russian gas pumped into Ukrainian storage facilities, but also the refusal to extend the payment period of the $ 2 billion loan from Gazprombank to Naftogaz Ukraine, testify that preparation for it is in full swing.

In addition, the fact that almost immediately after Putin’s visit to Ukraine, A. Kwasniewski and the former head of the European Parliament, P. Cox, who monitor the situation of Ukraine's commitments to the European Union.

In this situation, it is also necessary to understand that the gas conflict will certainly also be political and ecclesiastical. And the escalation of the conflict is certainly hello to the introduction of a visa regime between the two states.

The Ukrainian president also adds fuel to the fire, who in early September as part of a meeting with representatives of the Party of Regions, said that the Russian partners had violated a number of agreements, as well as the fact that the association with the European Union was Kiev’s deliberate choice. The violation of the obligations undertaken by Russia, he said, is not just an insult to the Ukrainian head of state, but to the country as a whole. In particular, the point is that within the framework of the Kharkiv agreements, the Russian side promised that if agreements were reached, the gas price formula for Ukraine would change. Later, the Russians did not keep their word. Yanukovych stressed that there is no respectful and partnership relationship of Russia to Ukraine, so the decision of the Ukrainian government in favor of the European vector has no alternatives.

The Ukrainian president also said that at present the trade turnover between Ukraine and Russia is 62 billion. If the Kremlin does not abandon its plan of pressure on Ukraine, the volume of trade can be halved. That is why, Yanukovych is sure, one of the main requirements of Ukraine for signing an agreement with the EU is the requirement to open European markets for the Ukrainian manufacturer as compensation for the fall in trading activity with the Russians.

At the same time, some experts do not exclude the possibility that the situation between Ukraine and Russia can become so heated that such an armed conflict is not excluded. However, some of them express very strange and unexpected considerations. So, in particular, one of the Ukrainian TV presenters, Alexey Arestovich, who some time ago served in the General Directorate of Intelligence, said that thousands of fighters would be enough for Ukraine to defeat Russia. The presenter explained this statement by saying that the Russian army is part of the Soviet, and at present it is not very efficient. Psychological condition is no better. The real military who served in Chechnya have long been dispersed. Some of them are already dead. In addition, Arestovich noted, the Russian government carried out a not very successful military reform.

“She (the Russian army) - part of the Soviet, today is not very combat ready. The psychological state of the army is bad. All the generals who made a career in the war in Chechnya - Rokhlin, Kazantsev, Troshev, Lebed - are dead. GRU dispersed. This means that the army has gone blind and deaf. Crossed unsuccessfully Aviation The Ground Forces and the Air Force made many other unsuccessful decisions, ”Arestovich describes the state of the Russian armed forces.

The Ukrainian army, according to Arestovich, on the contrary, is very efficient. Of course, she is chronically short of funding. At the same time, the Ukrainian armed forces have a number of strong advantages, in particular, we are talking about the joint command of special operations, which exists only in a few NATO countries. In addition, there are many quite interesting and promising developments.

The Ukrainian army, on the contrary, seems to him to be combat-ready. “She is exhausted and chronically underfunded. But she has strengths. For example, the combined command of special operations. Only six NATO countries have this. There are interesting and promising developments. Ukraine performed well in Iraq. And we do not forget that seven Russian planes were destroyed over Georgia in five days. Ours did not shoot down, but they helped the Georgians set up an air defense system, ”he notes.

Yes, and speaking quite frankly, the TV presenter believes, it’s not the one who is trained well, who is fighting well, but the one who has better motivation. Therefore, Ukraine, in the case of Russian military aggression, will have a significant advantage. After all, Russia will be able to go to a neighboring country with an army of about 40 thousands of people, and this will certainly affect the situation in the Caucasus and the Volga. In addition, we should not forget about China, which is friendly with Russia only externally.

Ukraine, he is sure, to fight back, a very small army will suffice: “Thousands of guys will be enough. They don’t need to crawl under Tanks. Let them not even enter into big battles, but destroy communications, communication lines, and attack small groups of invaders. And those 40 thousand will have tremendous problems. And there are a thousand in Ukraine. ”

Ukraine, in order to defend itself, will require no more than a thousand soldiers. Moreover, all that is required of them is to destroy the paths of communications, communications, and to attack small groups of the enemy.

It is commendable, of course, that there are people in Ukraine who are so confident in the military power of their army, but one should not forget that the same military budget (and, therefore, equipment with armament and military equipment) in Russia is ten times higher than the Ukrainian one. On the other hand, in a situation where relations between the two states are already heated, such statements deserve condemnation at best. It is clear that, if necessary, this same Arestovich will not participate in any conflict, but will incite hatred and ethnic strife from the studio. And for the like and need to be held accountable ...

Ctrl Enter
Noticed oshЫbku Highlight text and press. Ctrl + Enter
We are
Kyrgyzstan is ready to become the fourth member of the Customs Union: who will be in the black?Reasons why Kyrgyzstan is not admitted to the Customs Union
Military Reviewin Yandex News
Military Reviewin Google News
357 comments
Information
Dear reader, to leave comments on the publication, you must to register.