13 September 2013
27
2 June 2011 was held in Rome, a military parade dedicated to the 65 anniversary of the proclamation of the republic and the 150 anniversary of the unification of Italy. During this event, not only combat vehicles in service were shown, but also several prototypes of advanced equipment. At the parade, the prototype of the new Centauro 155 / 39 LW Porcupine (Porcupine) prototype was demonstrated for the first time. The Porcupine ACS is another combat vehicle based on the Centauro chassis, already used in several armored vehicles projects. In the near future, in connection with the decommissioning of old equipment, the main self-propelled artillery installations of the Italian army will be the German-made PzH 2000, assembled under license in Italy. The Porcupine ACS is created taking into account the need to supplement and then replace foreign equipment and preserve the combat potential of artillery. 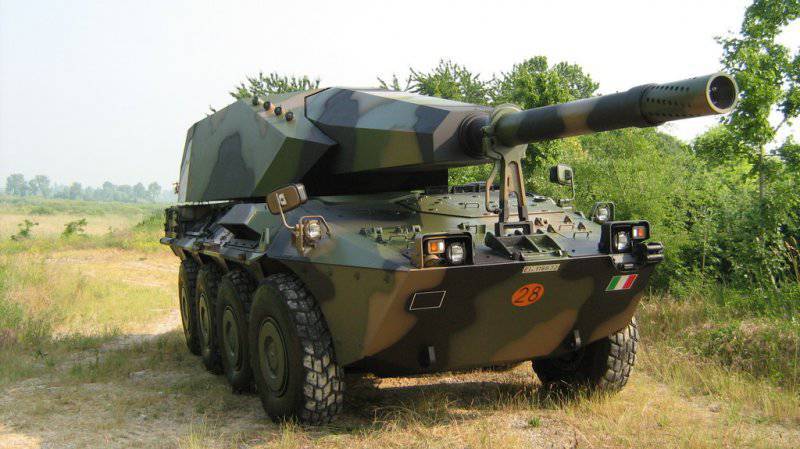 The new development of the CIO consortium, which includes Iveco Fiat and OTO Melara, is based on a modified “wheeled” chassis tank»B1 Centauro. The 8x8 chassis is equipped with bulletproof armor similar to the Centauro base car. When creating a new project, the original armored hull underwent minimal changes associated with increasing the level of protection against mines. The Centauro 155/39 LW self-propelled guns are equipped with an Iveco MTCA 520 hp diesel engine. Such a power plant in combination with a wheeled undercarriage provides a 25-ton combat vehicle with sufficiently high running characteristics. On the highway, the Porcupine self-propelled gun can accelerate to a speed of about 100 km / h and overcome up to 800 kilometers at a single refueling. It is easy to see that the mobility characteristics of the new self-propelled guns remained at the level of the “wheeled tank”, which served as its base.

In the rear of the armored hull, as on the original B1 Centauro, the Porcupine ACS is equipped with a rather large turret with a weapon. When you first look at the promising Italian SAU, your eyes linger on the turret with the original gun mask. Both the tower and the mask are assembled from several straight metal sheets, which gives them a distinctive appearance with many straight edges. In addition, the gun mask has a much larger size than similar units on existing self-propelled artillery installations. The reasons for the use of such an original tool mask were not called.

The design features of the tower and the chassis led to specific capabilities for the guidance of guns. Systems inside the turret can raise the howitzer barrel to an elevation of 75 ° from the horizontal and lower it to 5 ° below it. At the same time, the tower has limited horizontal guidance angles: due to the peculiarities of balancing the chassis and the machine as a whole, as well as due to a number of other structural moments, the tower turns only 15 ° to the right and left of the longitudinal axis of the self-propelled gun. This greatly limits the combat capabilities of the machine when working at the front edge, but it has almost no effect on shooting from closed positions, for which it is primarily intended. The same can be said about the time required to transfer the car from a traveling position to a combat one. The first shot is possible three minutes after arriving at the position.

The main weapon of the Porcupine self-propelled artillery gun is the 155-mm howitzer FH70 with barrel length 39 caliber. The gun has a large muzzle brake with a large number of round holes. Allegedly, using Centauro 155 / 39 LW active-projectile launchers can hit targets at a distance of up to 60 kilometers.

Perhaps the most interesting part of the Porcupine project is the internal equipment of the gun turret. The fact is that the SAU crew consists of only two people and is located inside the armored hull. The tower, in turn, is uninhabited. The howitzer comes with a fully automatic loader system that provides a firing rate of up to 8 shots per minute. High rate of fire is compensated by a small ammunition. In the autoloader packs, there are just 15 shots, which accordingly affects the practical rate of fire. Because of this, the developers suggest using Porcupine ACS together with a transport-loading machine on a similar chassis. After the spent ammunition is used up, the self-propelled gun can get new projectiles within 8-10 minutes and in about a minute again open fire. The ability to feed shells from the ground, according to some sources, is not provided.

The Centauro 155 / 39 LW ACS can use the entire existing NATO nomenclature of 155 millimeter shots. In addition, the company OTO Melara in recent years has created several new types of shells of this caliber, differing from each other in the applied systems. In the line are unguided and guided munitions, including active-reactive. The latter include the stated maximum firing range of 60 kilometers.

Self-propelled howitzer is equipped with a digital fire control system that allows you to automatically carry out all the necessary calculations. Among other things, the self-propelled gun self-propelled guns Porcupine can, without the operator’s participation, fire in MRSI mode (a so-called barrage of fire) with a volley of up to four shots. For about 25-30 seconds, the SAU makes four shots with different charge and barrel elevation, with the result that all the shells reach a common goal with a minimum time interval. 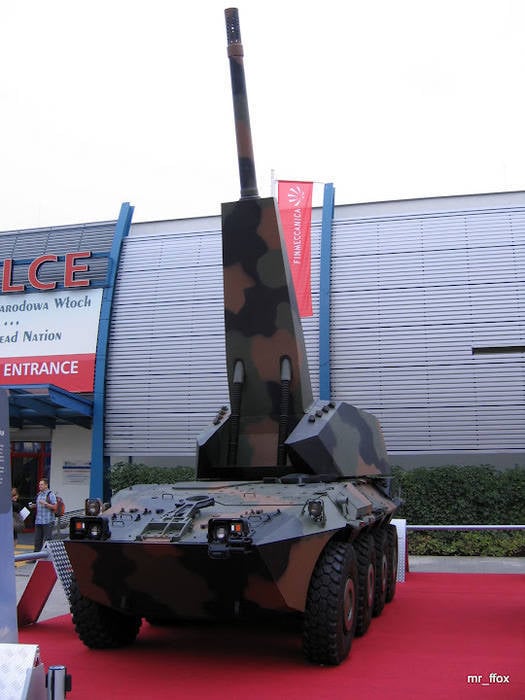 After the demonstration at the June 2011 parade, the prototype ACS Centauro 155 / 39 LW was shown to the general public several times, but none of the shows were accompanied by the disclosure of the desired amount of information. So, for example, it is still not clear at what stage this project is currently located. Judging by the lack of deliveries of serial combat vehicles to the Italian army, the prototype of the promising self-propelled gun is still being tested and refined. At the same time, less positive options cannot be ruled out. Due to the limited targeting angles and small portable ammunition, the Porcupine ACS is an ambiguous development in practical terms. The specific correlation of characteristics and fire capabilities (when using the latest ammunition) can lead to any completion — both to the beginning of the serial construction of combat vehicles, and to the suspension or even complete closure of the project.