"I sit high, I look away." On the ocean expanses

13 September 2013
12
Nowadays, the air forces of every self-respecting country (and in some countries the Navy, sometimes even the army) are trying to get airplanes or at least helicopters for long-range radar surveillance and control (DRL). And this is understandable - combat effectiveness directly depends on such vehicles aviation, and in peacetime, AWACS aircraft are useful - for patrolling the sea borders, for example. After all, a powerful radar, raised for kilometers into the sky, sees almost everything - especially over the sea. So read historical facts…

The idea of ​​raising the surveillance radar into the air was born almost simultaneously with the radar itself, but for many years it was not possible to implement it. The first surveillance radars were too big and heavy, they consumed too much energy.
But already in 1941 in Britain, the first practical step was taken in this direction: a rotating antenna was installed on the Wellington bomber fuselage, with the help of which it was supposed to detect German reconnaissance aircraft FW200 Condor darting around the north-west coast and point fighters at them. In parallel, it was supposed to detect the German submarines, which the Condors supplied with data on the movement of convoys. 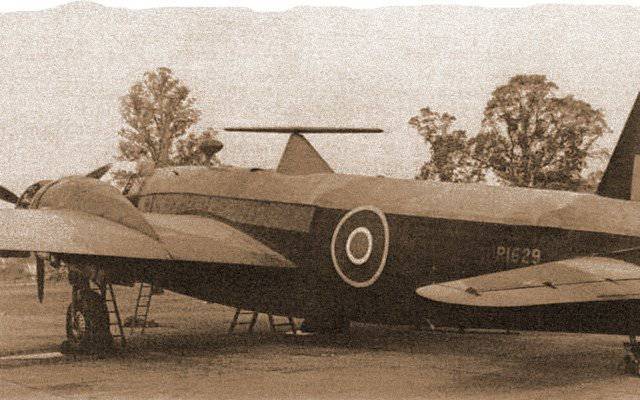 Tests have shown the practical feasibility of the idea, but it was not possible to force the radar to simultaneously detect air and sea targets: German submariners detected his work and sank in advance. It seemed to the British that it was unpromising to fence down the airborne early warning system for the sake of single enemy aircraft, and in 1943 the tests were stopped.
But soon their Americans began ...

The threat from Japanese submarines in the Pacific was practically reduced to zero, but aviation, especially with the introduction of kamikaze tactics, was still very dangerous. It was necessary to set up single ships of a radar picket on possible approaches to the ship's connections, which would detect the approach of the Japanese in advance and cause air cover from aircraft carriers. The system worked, but, firstly, the range of the existing shipborne radar was small, and, secondly, the Japanese often attacked the entire force of the attack on the picket ships - with sad consequences for them. 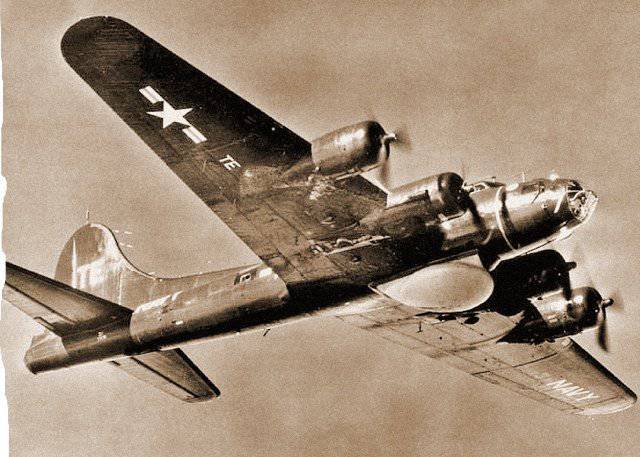 Project Cadillac was launched, aimed at creating a new shipborne and airborne radar. It ended with the development of the AN / APS-20 radar by the Massachusetts Institute of Technology (at that time, the miracle of technology with the detection range of aircraft groups up to 250 kilometers and single fighters - up to 80 kilometers) and the adaptation of two carriers: deck Grumman TBM-3W based on a bomber-base Torpedo Avenger and Boeing PB-1W - the sea version of the famous "Flying Fortress" B-17. On both, the parabolic antenna of the radar rotated in a large radome under the belly, and the fundamental difference was that on the Evanjera, in addition to the pilot, there was only one radar operator, who transmitted the testimony to the ship by voice, and from there the Flying Fortress "There were several such operators, and everyone could directly direct" his "fighter. Thus, the TBM-3W was a flying radar picket, and the PB-1W was a full-fledged control plane. Naturally, the future was the last, but it was the deck machine that was most needed. Therefore, only TBM-3W went to the series, but he did not even have time to go to war: it ended when the first ship with the air group that included these machines was already preparing to go to the Far East ... 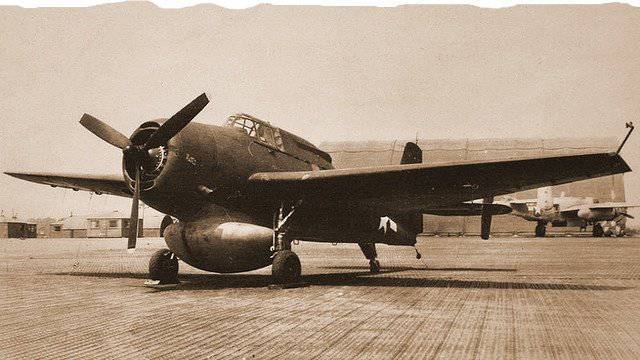 Nevertheless, TBM-3W (and its upgraded version of TBM-3W2) served in the American navy, and aircraft carriers in Canada, France and Holland, as well as in post-war Japan. True, it’s basically not like an AWACS plane, but like an anti-submarine one: the AN / APS-20 turned out to be useful for detecting not only aircraft, but also ships, including submarines above the surface and under the snorkel, and TBM-3W were paired with shock “Evenings”: the first one searched, the second bombed the target. But the possibility of using the aircraft for early detection of air targets remained ...

The aircraft was still able to be used for early detection of air targets on the search version of the AF-2W Guardian deck-mounted anti-submarine aircraft, where there were already two operators, and on an experienced submarine hunter based on the same AD Skyraider attack aircraft. In the series of “puffy” “Skyraders” went like DRLO planes, about 400 machines of three modifications were made - AD-3W, - 4W, -5W, they took part in the wars in Korea and Vietnam, and the British export - in Suez 1956 conflict of the year.

On all of these planes, though modernized, but still the same AN ​​/ APS-20, and air combat control was carried out from the ship. It did not suit the American sailors, and in 1955, they formulated the requirements for a deck-based aircraft control aircraft. The requirements were extremely high, especially in terms of electronic filling, and soon I had to admit that they could not be fully implemented. Nevertheless, the Grumman WF-1 Tracer built for them was for its time a very perfect machine. 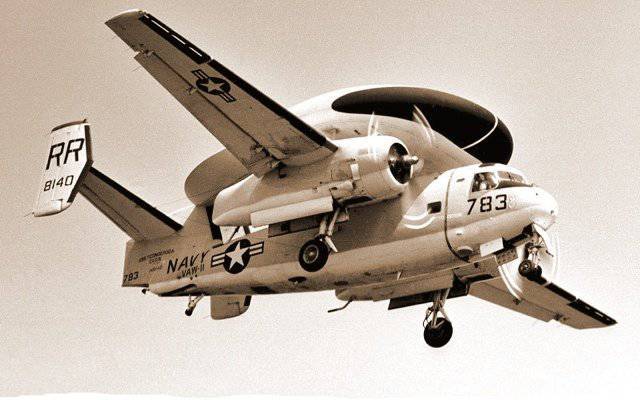 It was developed on the basis of the twin-engine anti-submarine S2F Tracker, but to accommodate the AN / APS-82 radar, the most sophisticated in those times, the plane had to be made “two-story”: an enormous drop-shaped fairing rose above the fuselage in which the antenna rotated. In terms of the detection range, the new radar did not particularly exceed its predecessor, but it was a cut above the quality of work. Antenna stabilization, determination of the flight altitude of the target, the allocation of low-flying targets above the sea surface, improved communication equipment was provided. On board the "Tracer" there were two operators and two pilots, but one of the pilots could perform the duties of a third operator, operators could work both with the ship control station and directly direct fighters to the detected targets. At 1958 the year when the Tracers entered service, they were the best DRLO aircraft in the world, but work on a new machine, which determined the appearance of this class of aircraft for decades, had already begun on the Grumman.

General Electric created the AN / APS-96 radar, its antenna cover had a characteristic plate shape and rotated with it. But the matter was not only in the radar: it was part of a single complex with automated data transmission lines, a computer with a memory on a magnetic drum (!) And a friend-to-friend recognition system. Automatics facilitated the work of the operators (and there were already three of them, plus two pilots): if on early machines they had to calculate the course and speed of the target manually, the computer did it on the new plane. Target detection range reached 320 kilometers.

The plane was really new - in contrast to the past "radar" it was originally designed for this purpose. Turboprop S-2A Hawkeye with a radar "plate" on the pylon on the fuselage went to the fleet already in 1964 year, but, as practice has shown, with the introduction of the machine into the series hurried. There were problems with the aircraft itself, and with the electronics, especially the computer often hung up, and a year later the production was stopped. It got to the point that a ban was issued on flying the "under-baked" Hokaya! As a result, the functions of the ARLO on American aircraft carriers during the Vietnam War were performed mainly by the Tracer and even the later Skyraders.

Hastily had to patch the “holes” and heal the “glitches”. The solution was found only for the 1969 year, replacing the computer with a more modern one with magnetic core memory (for our time, too, incredible archaism), as well as changing some other equipment. Fifty of the previously released E-2A were soon modified in E-2B, but in 1968, work began on a new version, E-2С. 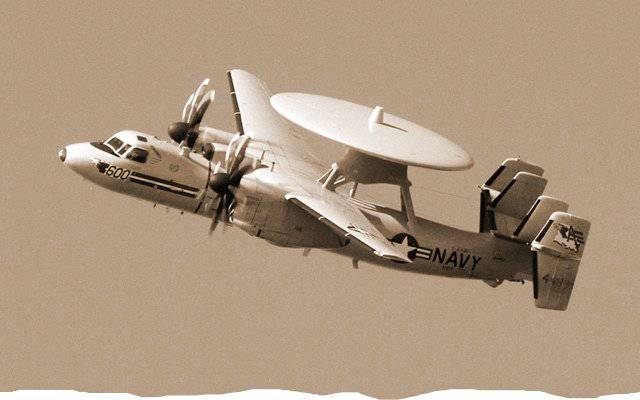 Outwardly, he hardly differed from the early "Hokaev", but the electronics there was completely new. The new radar AN / APS-120 provided some kind of target allocation on the ground, new electronics - new features (there was a radio source direction finding system, an inertial navigation system, two computers), new engines - more power.

In general, the car brought and its popularity began to grow. There were more and more new modifications and upgrades: new engines and radars were installed, computer equipment was improved, the plane began to see not only air, but also ground targets, their number was simultaneously increasing, the radar and communication channels were noisy. Currently, the Hokai of the American fleet has been brought up to the E-2C standard Hawkeye 2000 (H2K) with AN / APS-145 radar and has been actively used and used in all US armed conflicts. But they will soon be replaced by newly built cars of the latest E-2D modification.

Although outwardly they are almost indistinguishable from the usual Hokaev, radical changes have occurred in the electronic stuffing: a phased-array radar AN / APY-9 has appeared.

It is located in the same rotating “pancake”, but now not only the viewing function, but also tracking is implemented: the antenna can be aimed in the direction of the greatest danger and can be controlled in a continuous mode. All characteristics of the radar and related electronics significantly exceed the capabilities of what is on the E-2C, both in recognition and tracking of targets, and their detection range, brought to 450 kilometers for air purposes (ground - “total” 350 km). At present, the first E-2D is undergoing trial operation, and the mass commissioning will begin with the 2014 year.

Although the Hokai is a rather specific machine with a folding wing, a landing hook and other deck paraphernalia, it was supplied for export, mainly for purely land use. Israelis were the first to buy them (of course, E-2С) and successfully used in wars in the Middle East since 1982, and in 2004 they sold them to Mexico (airplanes are used mainly to combat aviation and maritime drug trafficking). In addition to Israel, the Hokai acquired Egypt, Japan and Singapore (all from 1987 onwards), Taiwan (on 1995) and France (on 2000), the latter to equip the aircraft carrier Charles de Gaulle. All other countries bought the Hokai only because they did not have enough money for larger vehicles, and there was no other DRLO aircraft in the light class. Now Americans are actively offering India’s E-2D to equip aircraft carriers being built at its shipyards - and the Indians are fundamentally ready to buy a rather large (by the standards of such a destination aircraft) batch.

To finish with the theme of decked DRLO aircraft, one should mention British attempts in this area. As already mentioned, in the middle of the 1950's, the British bought Skyraders in the US, but viewed them as a temporary solution before developing their aircraft. The anti-submarine aircraft Fairey Gannet was taken as a basis, and due to the lack of a proper radar of its own (and this is in the country that created the first DRLO aircraft!), The same AN ​​/ APS-20 had to be put on it, and according to some sources, the radars were removed from Skyraders. 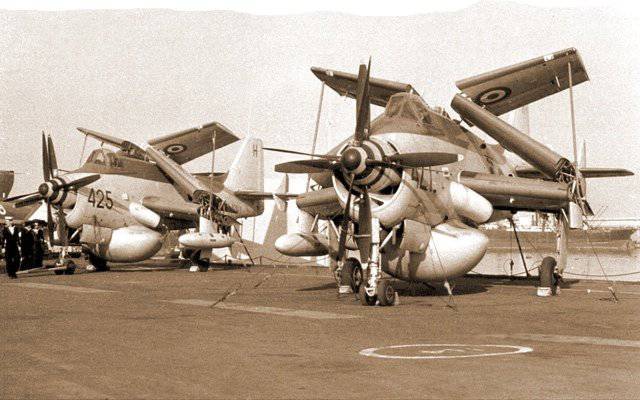 According to its characteristics in terms of detecting targets, the resulting Gannet AEW.3 aircraft, as it is easy to guess, was no better than its predecessor, but it was equipped with ultra-efficient twin turboprop engines. In this, the British overtook the Americans: the one-year-old Gannett Tracer had piston engines, but the Yankees had better electronics, and by the 1978 year, when the last Gannets had been written off, they were already the most archaic. Attempts to develop their own DRLO aircraft (and not only deck) until recently ended with the British nothing. 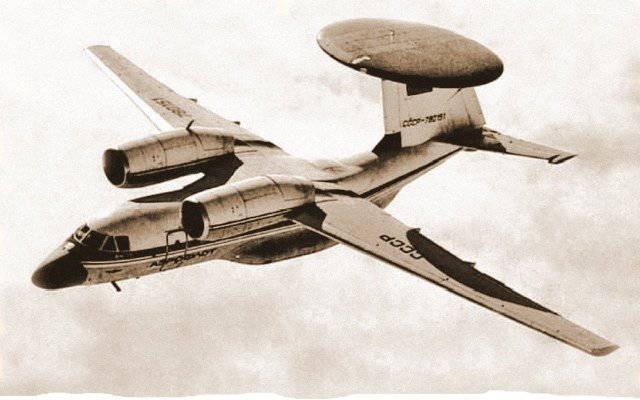 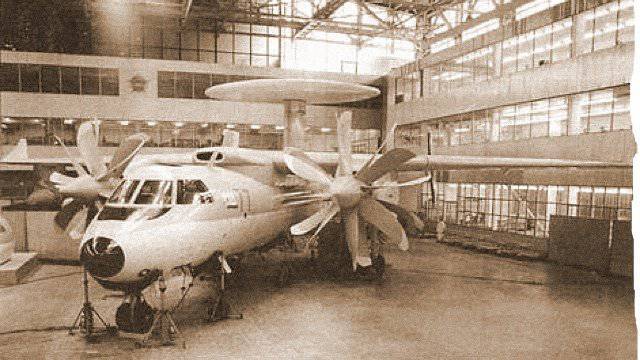 And what about Russia? In Russia, decks were also unlucky: the development of an aircraft of this designation based on the An-71 was considered unpromising, and the Yak-44 reached only the full-scale mock-up stage (which even managed to ride around the deck of the aircraft carrier Admiral Kuznetsov). You have to be content with helicopters ... (read the sequel)