The workhorse of the Russian cosmonautics in the XXI century 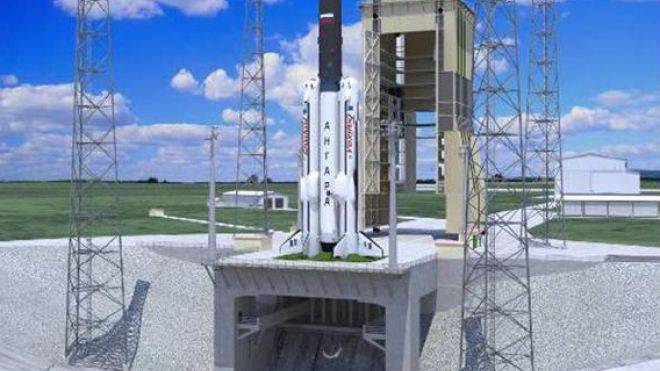 The basis of modern Russian cosmonautics is made up of the Soyuz and Proton rockets, which were created in the middle of the last century. Almost everything that is launched into space from Russian cosmodromes is launched into orbit by precisely these reliable, but fairly outdated machines. In order to update the rocket fleet and ensure unconditional access by Russia to all segments of space activity, the newest Angara missile system is entering the flight test stage. This is perhaps the only space rocket system in the world that has a wide range of capabilities for delivering spacecraft from 4 to 26 tons into space.

The requirements for space vehicles of the near future will be provided by the Soyuz and Angara missiles, but their carrying capacity is not enough to solve the problems of exploration of the Moon, Mars and other planets of the Solar System. In addition, they complicate the ecological situation in the Amur region because their waste levels will fall either in the Amur taiga or in the water area of ​​the Sea of ​​Okhotsk. It is clear that this forced situation is a payment for ensuring Russia's space sovereignty. What will this board be if a decision is made to build a super-heavy class rocket for manned flights to the moon?

Such missiles in our stories already were: "Energy" and H-1. The basic principles of super heavy rocket were laid and implemented more than 50 years ago, therefore, only money is needed to create it. And if a third heavy-duty rocket is created for the third time, then an additional 320 tonnes of waste metal with fuel residues will be accumulated annually in the Amur Region.

The desire to make rockets environmentally safe and cost-effective led to the idea of ​​returning the first stages of the rocket to the spaceport and their reuse. After working the allotted time, the steps should decrease in the atmosphere and how the plane returns to the place of launch. According to this principle, a reusable space rocket system (MRKS) will be operated.

MRX as it is

The reusable space-rocket system was presented to specialists and the public at the Moscow Aerospace Show in 2011. The system consists of four reusable launch vehicles (MRN) with returnable missile units (VRB). The entire series of MPNs with a carrying capacity from 25 to 70 tons can be assembled by various combinations of two main modules: the first module is the returnable missile unit (first stage), the second module is the second one-time rocket stage.

In a configuration with a payload of up to 25 tons (one VRB and one module of the 2-th stage), the reusable rocket can launch all modern and future manned and unmanned spacecraft. In the 35 tonnes dimension (two VRBs and one 2-th stage module), the MRN allows two telecommunication satellites to be launched into one orbit during one launch, delivery of advanced orbital stations into space, and removal of heavy automatic stations that will be used exploring mars.

An important advantage of the MPH is the ability to perform paired launches. In order to launch two modern telecommunications satellites using the Angara rocket, it is necessary to purchase ten rocket engines worth 240 million rubles. each. When launching two such satellites using the MPH, only one engine will be spent, the cost of which is estimated at 400 million rubles. Reducing costs only on engines is 600%!

The first studies of the returned rocket block were carried out at the beginning of the century and presented at the aerospace show in Le Bourget in the form of a mock-up of the returnable Baikal stage.

Later, at the preliminary design stage, work was done on the selection of fuel components, the solution of the problems of thermal heating, automatic landing, and many other problems. Dozens of VRB variants were analyzed in detail, a thorough technical and economic analysis was carried out taking into account various scenarios for the development of the national cosmonautics. As a result, the MRX variant was determined, which most fully satisfies the entire set of modern and future tasks. 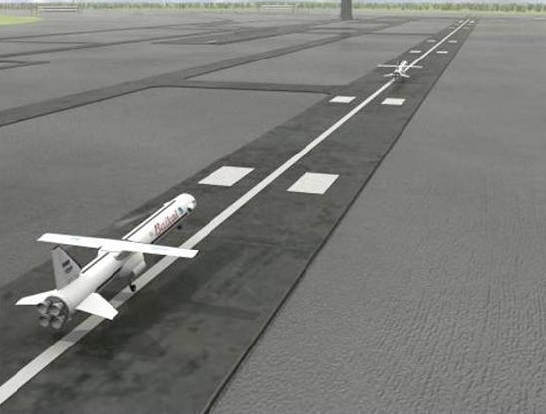 Solve the problem of reusable engine, it was proposed by the use of liquefied natural gas (LNG) as a fuel. Natural gas is a cheap, environmentally friendly fuel that has the most suitable properties for use in reusable engines. Confirmation of this was obtained in the Khimmash Design Bureau named after A.M. Isaeva in September 2011, when the world's first natural gas liquid propellant rocket engine was tested. The engine has been running for more than 3000 seconds, which corresponds to the 20 start. After its disassembly and examination of the state of the units, all new technical ideas were confirmed.

The problem of heating the structure was proposed to be solved by choosing the optimal trajectories in which the heat flow eliminates the intense heating of the structure. This eliminates costly thermal protection.

The task of automatically landing two VRBs and integrating them into the airspace of Russia was proposed to be solved by including the GLONASS navigation system and the automatic dependent surveillance system in the control loop, which was not used in rocket technology.

Considering the technical complexity and novelty of the equipment being created, relying on domestic and foreign experience, the necessity of creating a flight demonstrator, which is a reduced copy of VRB, is justified. Demonstrator can be manufactured and equipped with all standard onboard systems, without conducting special preparation of production. Such an aircraft will allow testing in real flight conditions all key technical solutions incorporated in a full-size product, reducing technical and financial risks when creating a regular product.

Expenses for a demonstrator can be justified due to its unique ability to bring objects weighing more than 80 t to a height of 10 km along a ballistic trajectory, accelerating them to a speed exceeding the speed of sound 7 times, and returning to the airfield for restart. A reusable product created on its basis may be important not only for developers of hypersonic aircraft.

The first stage is the largest and most expensive component of the rocket. By reducing the production of these stages due to their repeated use, it is possible to significantly reduce the expenses of federal agencies on spacecraft launches. Preliminary estimates show that for the successful implementation of all existing and future space programs, including the delivery of automatic stations to the Moon and Mars, it is enough to have a fleet of all of the 7 – 9 return missile blocks.

The MRXS has a philosophy of flexibility regarding the conjuncture of the space program. By creating an MPN with a lifting capacity from 25 to 35 tons, Roskosmos will receive a system that will effectively meet the challenges of today and the near term. If a need arises for the removal of heavier spacecraft for flights to the Moon or Mars, the customer will have an MPH with a payload capacity of up to 70 tons, the creation of which does not require significant costs.

The only program for which the MRX is not suitable is the program of manned flights to Mars. But these flights are not technically feasible in the foreseeable future.

Today there is a fundamentally important question about the future development of launch vehicles. What to create: a one-time missile of a super-heavy class, which will be used only in the Lunar and Martian programs and, in the event of their termination, the costs will once again be written off; or create an MRX, which will not only allow the current launch programs at a price one and a half times lower than the current one, but can also be used with minimal modifications in the Lunar program and the Mars exploration program?

Ctrl Enter
Noticed oshЫbku Highlight text and press. Ctrl + Enter
We are
Since the launch of the first artificial satellite of the moon, 50 years have passedSpace trampoline for the United States. Tribute to Dmitry Rogozin
Military Reviewin Yandex News
Military Reviewin Google News
11 comments
Information
Dear reader, to leave comments on the publication, you must sign in.