13 September 2013
30
The American news agency Bloomberg, referring to some unannounced sources, just recently said that China is going to actively participate in the privatization of Siberian oil and gas fields, which today belong to the largest Russian companies Rosneft and Gazprom. It is reported that we can talk about the purchase of the so-called minority stake in the Chinese company Petrochina, a member of the Chinese oil and gas corporation CNPC. Chayandinskoe and Kovykta deposits with total gas reserves of approximately 2,75 trillion cubic meters are called those fields where Chinese may come. 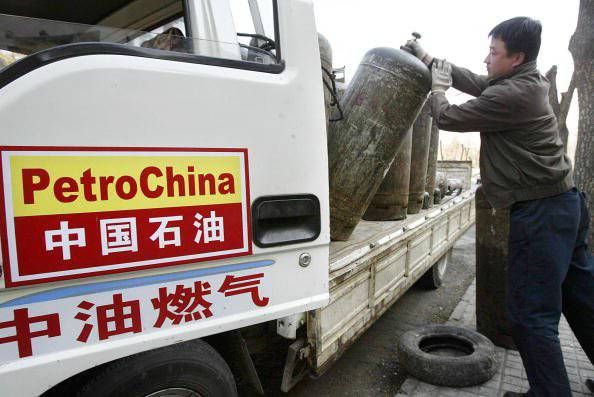 So far, neither Gazprom nor Rosneft have confirmed the information on the Chinese proposal, however, there are still grounds for not considering the message from Bloomberg. The fact is that only about a week ago, the Russian gas producer and processor of “blue” fuel (the second after Gazprom) Novatek signed a contract with the Chinese side for the sale of an 20% stake in the Yamal LNG project. The buyer of 20% of the shares was still the same Chinese CNPC, which, apparently, decided to more than actively come to the Russian market.

It is worth recalling that Yamal LNG is a project for the construction of an enterprise for the production of liquefied gas in the Yamal Peninsula. It is planned to deliver liquefied natural gas to the end user with the help of special gas tankers, which may not be afraid of even ultra-low arctic temperatures. One of the main importers of liquefied gas from the Yamal LNG project will be the Celestial Empire, whose oil and gas corporation has gained access to gas production at the South Tambeyskoye field and LNG production. It should also be recalled that the share of the Russian company Novatek in this project before the contract with the Chinese was not equal to 100%. Before the desire to participate in the project of a Chinese company, the French expressed a similar desire. Sayings resulted in a desire to acquire 20% of the shares, and exactly these 20% were bought out by the French. Thus, it turns out that the stake in the Yamal LNG project remained in the hands of Novatek shareholders by 60% (20% is owned by French company Total, and 20% by the Chinese CNPC).

Prior to 20, a percent of the shares of the Chinese company Petrochina is going to buy back from Gazprom also when implementing a project to produce gas in the East Siberian fields. In this case, the cost of the transaction is tentatively estimated at 10 billion dollars, which is called, live money. In other words, the Chinese are going to invest $ 10 billion now in the development of hydrocarbons in Eastern Siberia, and then, according to the letter of the contracts concluded between Russia and the PRC, to pump the negotiated volumes of gas to the Celestial Empire by creating a joint venture with the same Gazprom.

These events occur against the background of constant conversations in the Russian government about the need to attract foreign investors, which will help to pull our economy out of prestagnational state and add growth to it. It would seem that everything is just perfect: the desires of the Russian cabinet finally coincided with the desires of the very foreign investors, and the money will now flow into Russian projects by the river. However, a number of fears and questions immediately arise here (I would like to hope that the concerns about this are unfounded).

One of these concerns is this: 10 billion dollars - is this the “river” that today will give the Russian economy a full-fledged impetus for substantial development? Obviously, not the same ... Brussels with Paris and Berlin to little Greece already hundreds of billions, forgive, it is swelling, but no progress is visible. Moreover, Russia is not Greece at all, if only because the potentials of the Russian and Greek economies (with all due respect to the Greeks and their economies) are incomparable. Unlike the Greek one, there is enough money in the Russian economy, but we don’t have the mechanisms to make this money work.

Well ... Do not even need to talk about the Russian economy as a whole. It is enough to consider only Gazprom. It would be strange to assume that this giant will not find 10 billion dollars from its almost 150 billionth annual turnover for the full-scale development of the above-mentioned fields of Eastern Siberia. If it does not find it, then either the volume of capitalization of this company is voiced too high (which is unlikely, since the assessment goes far not only from representatives of Gazprom itself), or Gazprom is given the command - not to seek.

Novatek, with its more modest turnover (about 3,5 billion dollars a year), can be understood: investment assistance will be useful to it. The only thing is that Novatek and Gazprom deal with, let's say, a specific product — natural resources, which, as quoted in the Constitution (Art. 9, p. 1), “are used and protected in the Russian Federation as the basis life and activities of the peoples living in the relevant territory ". They (Novatek and Gazprom) do not seem to make pots or chewing gum to make it so easy to decide which foreign company to sell shares of the country's strategic facilities — hydrocarbon deposits ... So, the constitutional thesis itself “... is protected in the Russian Federation as the basis of life ... "already lost relevance? Who is protected by whom is protected from? Is that, PSC oil and gas companies from us with you ...

The following picture turns out: China, which has concluded multi-billion contracts with Russia for the supply of hydrocarbons, simply does not want to buy these hydrocarbons, but wants to participate in their production and transportation. What for? Yes, everything is very simple. If China bought gas from Russia as an ordinary buyer for the near future, it would simply transfer money to the accounts of Russian companies, receiving raw materials as the final consumer. That is, I would wait for Gazprom or Novatek to pump gas from Siberian fields and run it through pipes (or in tankers in the form of LNG) to Celestial. Buying shares in a joint venture on the territory of Russia, China pays not so much for the gas itself, as for the opportunity to participate in large-scale projects for the development of Russian fields with all the attendant - getting their own profits, opening jobs for their own employees, paying a certain share of taxes to China treasury, etc. Moreover, joint ventures with foreign participation may receive benefits from the Russian state due to the fact that mining is conducted in difficult conditions and is aimed at developing a strategically important region. For the Chinese side, the project is more than profitable. But for the Russian? ..

Of course, friendship with China (if there really is one) needs to be cherished. But friendship is friendship, and the snuff is apart. If it is foreign investments that are so important to the government, then why do we need to choose strategic commodity sectors? Do we have few other projects in which foreign companies could effectively invest. Yes, only foreign companies are not eager to invest their billions, for example, in Russian factories for the production of medicines, quality furniture, environmentally friendly fuel. It is much more profitable for them to invest in our raw materials, so that later we, using this raw material, sell our products, developing our own economies and opening new jobs for our fellow citizens.