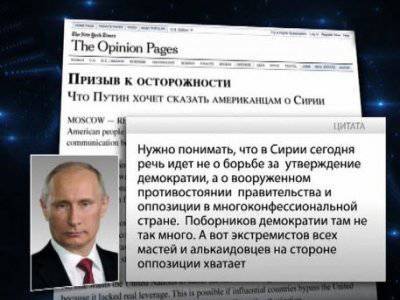 September 11 under the heading "Opinion" of the newspaper "New York Times" Appeal to the American people ... no, not Barack Obama, not John Kerry, not James Clapper, or even Mikhail Gorbachev. The President of Russia addressed the Americans in the pages of one of their most popular newspapers. Vladimir Putin believes that Russian and American society is not communicating enough, and therefore he set out to clarify, through an influential newspaper, Russia's position on the Syrian issue in particular on issues of war and peace in general.


The president began with a reminder to the Americans that there was a cold war, but there was also joint opposition to the Nazis. It was established by the UN and it was established that decisions on issues of war and peace should be made only on the basis of consensus, as well as with the consent of the permanent members of the Security Council having veto power. In the future, this became the basis for the stability of international relations for decades.

Nobody wants, writes V. Putin further, that the United Nations befall the fate of the League of Nations. But such an outcome is possible - in the event that powerful countries bypass the United Nations and start military actions without the sanction of the Security Council.

A strike on Syria, according to the Russian president, will lead to innocent victims, the spread of the conflict beyond Syria, an increase in violence and a new wave of terrorism. The whole system of international law is staggering.

According to Putin, in accordance with applicable international law, the use of force is allowed only for self-defense or by decision of the UN Security Council. Everything else is unacceptable in accordance with the Charter of the United Nations and, in essence, is an act of aggression. Therefore, the president writes, it is disturbing that for the United States it has become commonplace for military intervention in internal conflicts in foreign countries.

As for some strategic long-term interests of America in Syria, the Russian president expressed doubt about this. Millions of people around the world, he notes in the article, are increasingly seeing in the United States not a model of democracy, but a state that implements the principle of brute force under the slogan: "Either you are with us or against us."

But only that power turned out to be ineffective and meaningless. Examples of that V. Putin sees in Afghanistan and Iraq. The conclusion that the president makes: should “stop using the language of force and return to the path of a civilized politico-diplomatic settlement”.

As for Syria, it is now possible to avoid hostilities:

“The United States, Russia and all members of the international community should take advantage of the Syrian government’s willingness to place its chemical arsenals under international control for subsequent destruction. Judging by the statements of President Obama, the United States sees this as an alternative to military action. ”

“If we can avoid the use of force against Syria, it will improve the atmosphere in the field of international relations and strengthen mutual trust. This will be our common success and will open the doors for cooperation on other important issues. ”

Comrade Putin further points out that he “carefully studied” the appeal made by the American president to the nation on Tuesday. Vladimir Putin disagreed with some accents placed by Obama:

“It is very dangerous to encourage people to consider themselves exceptional, regardless of motivation. There are big countries and small, rich and poor, with long-standing democratic traditions and only looking for their own way to democracy. Their policies are different. We are all different, but when we ask the Lord for blessings, we must not forget that God created us equal. ”

Below are a few characteristic comments on Putin’s address to the New York Times.

Virgil Antonov, Lancaster:
"An exceptional, modest and intelligent call for peace with Syria, received from the president of one of the most powerful military powers to the president of another."

Dan, Toronto:
“I think Putin has found the right argument. And I agree with his condemnation of the concept of "American exclusivity."
And now let's see what answer Obama will print and post on the Internet in the national Russian media. That's when the world can truly see the "civilized political and diplomatic settlement" in action. "

Mile C., Dallas:
“Although I do not agree with many Russian politicians, I welcome Putin’s call for caution. “Limited Military Strike” - a euphemism for war, which should be the last resort ... ”

Brett E., Denver:
"It is very dangerous to encourage people to consider themselves exceptional, regardless of motivation." - This is the best that communism has to offer the world.
Mr. Putin, you can find everything you need to know about American exceptionalism by studying the presidency of Ronald Reagan. ”

Don Malloni, San Francisco:
“That which is so well founded is not necessarily sincere - that is the question. It may well be that the goal of Putin’s publication is to maximize Russia's current influence. Another goal is to apply the maximum possible pressure on our political class. We must take into account the tricks with which Russia will maintain a strategic advantage. The United States has made many mistakes, being the only superpower in the world, but can you imagine Russia in this role? ”

Alvin J. Martinez, San Juan:
“By continuing his confrontational policy, Mr. Obama recalls his belligerent predecessor and loses a high moral foundation in international relations compared to other leaders of the world community. Putin has become the voice of reason on the world stage, and he is supported by many influential people. If Mr. Obama continues to rely on military power, thereby imposing American decisions on others, I am afraid he will lose even more prestige and destroy the reputation of the United States that they once had in the world. He passes the baton of world leadership to Mr. Putin. Think America. ”

Observed and translated by Oleg Chuvakin
- especially for topwar.ru
Ctrl Enter
Noticed oshЫbku Highlight text and press. Ctrl + Enter
We are
"Pathological liar" from the State DepartmentResults of the week. “Why is the war going on? Do they not read newspapers? ”
Military Reviewin Yandex News
Military Reviewin Google News
207 comments
Information
Dear reader, to leave comments on the publication, you must to register.