12 September 2013
119
Russian Defense Minister Sergei Shoigu at the end of August 2013, during a visit to the exhibition “Innovation Day of the Ministry of Defense of the Russian Federation,” approved the use of field uniforms and included it in the state defense order. The new field uniform for military personnel has been called the “All-season Basic Uniform Kit” (WTU) and includes an 23 garment. According to the Minister of Defense of Russia, the main advantage of the presented form is the principle of multi-layeredness, thanks to which soldiers and officers of the Russian army can serve in all climatic zones of Russia under different weather conditions using the same set of uniforms.


All basic uniforms, including summer suit, short lightweight underwear, pants, cap and other elements are made of modern materials. At the same time, it easily fits into a specially designed bag for this purpose, in which it is very convenient to store and transport the kit. The representative of the manufacturer of JSC "BTK Group" Daria Borovleva noted that the first ready-made kits of the new generation were sent to the Russian army on July 7 2013. In the future, the form will begin to be delivered to the troops as part of the state defense order.

The company "BTK Group" is currently one of the leading enterprises of the domestic light industry. It was founded in 2005 year as a result of combining the capacities of St. Petersburg CJSC FOS-P and CJSC Trud. The main activity of this company is the creation and production of professional and classic men's clothing. The company's turnover for 2012 year amounted to 6,2 billion rubles. In April of the current year, OJSC “BTK Group” underwent a voluntary certification procedure and was included in the Federal Register of bona fide suppliers as a company that meets all the requirements of the state standard for quality of supply. 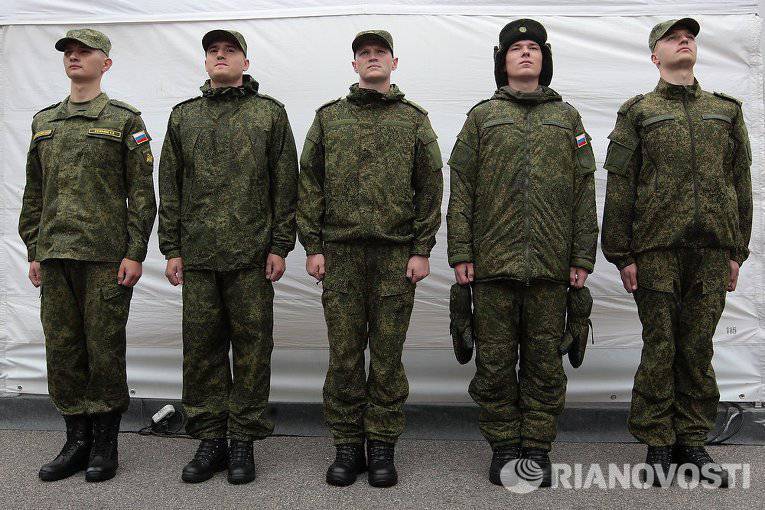 The task of creating a set of uniforms of the new generation and the delivery of experimental samples to military units was assigned to the enterprise in September 2011 of the year. Throughout the entire 2012 year, an experienced VKBO was worn in the operating units of the Russian army. 8 military units that were in different climatic conditions — Central Russia, Siberia, and the Arctic — were selected for the test socks of the new uniform. A total of 500 experimental kits were supplied to military units. At the same time, the participation of specialists in testing was not limited to the manufacture and supply of sets of uniforms. They also conducted briefings on the rules of wearing new sets, were engaged in the preparation of special instructions with recommendations for wearing.

The main period of the test socks new field form lasted from January to April. All this time, servicemen kept special diaries, where they regularly recorded the results of using the new form, their impressions of socks, made comments and observations. Most of the comments related to individual elements of the form, for example, the length of the pants and jacket. On the basis of proposals received from servicemen, modifications were made to the design of the form. In particular, a warmed jacket was extended, as well as a summer suit jacket, to protect the back, the belt of warmed trousers was made higher, and internal waterproof pockets for storing various documents were also added. 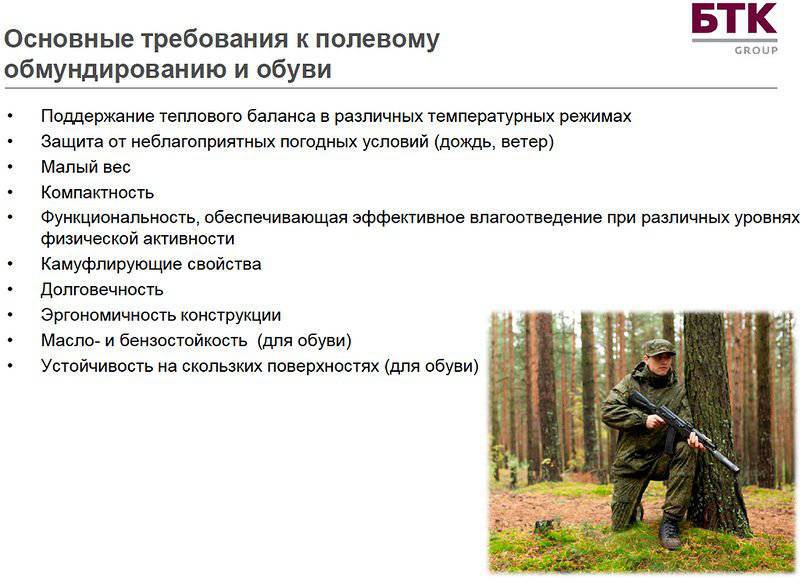 The main feature of the new military field uniform is that it is multi-layered. This approach was first used in Russia for field uniforms of military personnel. Previously, this principle was used only in the manufacture of equipment for special purpose units. Immediately after the announcement and presentation of the new military uniform, journalists rushed to christen it “cabbage”. Since then, this definition has been fixed for her quite strongly.

22 August 2013 of the company "BTK Group" announced the launch in St. Petersburg of the serial production of field form new generation - VKBO. Earlier, uniforms had already been carried out at company sites located in the Leningrad Region (Boksitogorsk, Vsevolozhsk, Podporozhye). At present, they are fully focused on high-quality and timely execution of the order of the Ministry of Defense of the Russian Federation.

"Kapusta" was developed by specialists of the company "BTK Group" by request and in close cooperation with the Ministry of Defense of Russia. The development of the field form was carried out using the laboratory base of expert and research institutes, as well as taking into account the advanced developments of the armies of the leading states of the world. In total, the WCF includes a 23 garment, including 3 pairs of shoes. The innovative feature of the basic outfit kit is the principle of layering. Combining 8 of different layers allows military personnel to use WTDCs both in the offseason and in winter in a wide temperature range from + 15˚C to -40˚С. The combination of layers may vary depending on weather conditions, the climate zone, as well as the intensity of physical exertion experienced by soldiers and officers. For air temperature from + 15˚С a special summer field suit is provided. 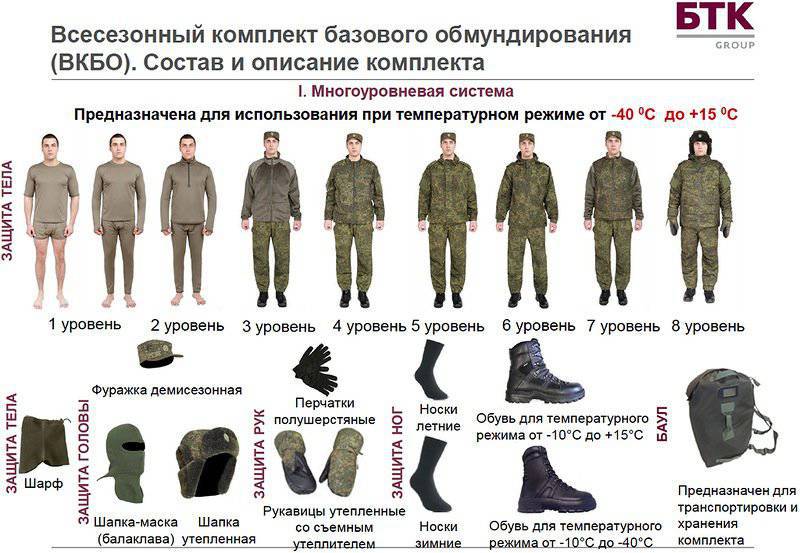 During the whole of last year, new-form kits were tested in the subdivisions of the RF Ministry of Defense located in different regions of the country under conditions of actual service. According to the results of this experimental socks, as well as taking into account the wishes of servicemen, a number of changes and corrections were made to the WCEC. The result of this work was the legal registration of the Order of the Ministry of Defense of the Russian Federation from July 7 2013 for the number 437 of the provisional norms for the supply of Russian military personnel with a new field kit.

It should be noted that for the production of a new set of forms used only the most modern and technological materials. Here there are many original designs. For outerwear (let's leave this traditional name for a windproof suit, windbreaker jackets, insulated jackets and waistcoats; the creators of the kit call them differently - top products), a resistant, water-repellent surface treatment of products, and silicone fabric processing were used. This solution ensures the safety of heat due to good vapor permeability, as well as due to a small coefficient of moisture absorption.

In addition, membrane lamination was widely used. The membrane is a special thin perforated film that has micropores, which are 20 in size thousands of times smaller than a drop of water, and 700 times the size of a vapor molecule. Thanks to this membrane evaporation is very easy to go outside, while water droplets are not able to get under the clothes of a soldier. These materials were used in a windproof suit, as well as in a warmed vest. 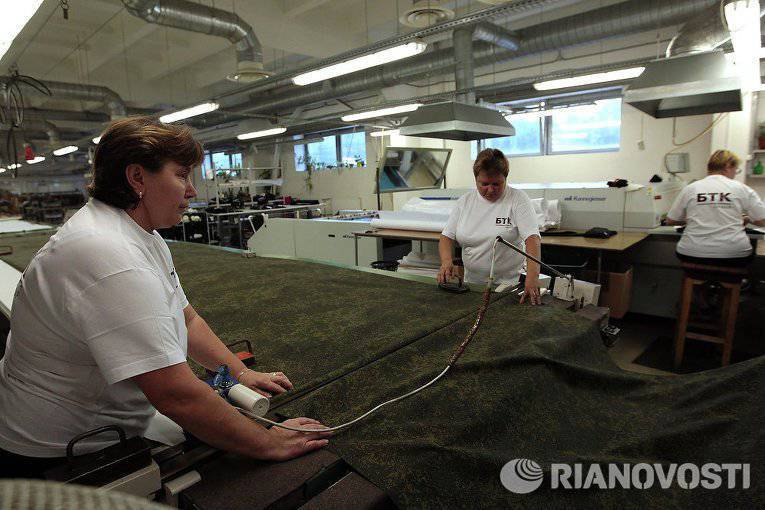 Specialists of the company have developed special recommendations for military personnel. Using them, any soldier will be able to pick up the set of clothes that corresponds to his individual physiological features and weather conditions of the task being performed. Weather conditions can include wind, high humidity, cold from -20 to -35 degrees, and even extreme cold to -40 degrees.

“The task of creating and organizing the release of a new field form is very responsible and demanded serious preparation from us. Until recently, not a single enterprise of light industry in our country produced such high-tech clothing for the Russian army. We at BTK Group devoted a significant amount of time to preparing for the start of production, training specialists, and setting up equipment, and therefore we are absolutely sure that the military order will be completed on time and efficiently, ”commented the beginning of the production of VKBO in St. Petersburg Andrei Podoprigorin , being the head of the directorate for interaction with the executive bodies of the company "BTK Group".

The supply of VKBO to warehouses of the Ministry of Defense of Russia in accordance with the concluded contract will be carried out in stages over 3 years - from 2013 to 2015 a year. Until the end of 2013, the Russian military will receive 100 thousand sets of new field uniforms. It is worth considering the fact that the use of the new form will allow to achieve considerable savings of funds. The all-season basic outfit kit will become inventory property (the lifetime of such a kit will be for 3-5 years, while the existing form kit will last only for 1 a year). At the end of the service, the soldiers will hand over the basic elements of the kit, which, after cleaning, will again be issued to recruits. Naturally, this principle does not apply to underwear - it will be issued to every soldier by a new one.