Putin returns Russia the status of a great power in the international arena ("Atlantico", France)

12 September 2013
184
While the international community could not get off the ground over the Syrian crisis, the Russian president managed to find a solution with which most of the main actors agree. In diplomatic circles he is already called a “masterful” move. 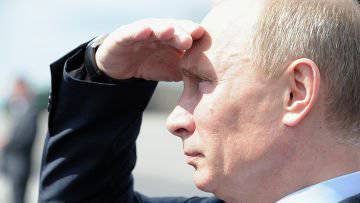 Atlantico: On Tuesday, Bashar Asad eventually agreed to a proposal from Moscow regarding the transfer of a chemical arsenal under international control. Should this initiative be viewed as a concession by the Kremlin, or is it part of a larger strategy?

Philippe Mego: One does not necessarily exclude the other. The initiative can be viewed primarily as a gesture of goodwill on the part of Moscow and Damascus, but at the same time it may well be part of a broader strategy that should knock the ground out from under Washington and its French, Saudi and Qatari allies. I also want to note that the decision of Assad to accept this proposal is quite logical, because it allows him to extricate himself from a difficult situation. This is a double-edged sword and at the same time a clever diplomatic move. If Western leaders had abandoned the opportunity offered by Putin, they would have exposed themselves as shameless instigators of war in the eyes of the international community, which is having more and more doubts about the justification for American plans to intervene. Now the advantage is clearly on the side of the Kremlin, while the White House and the Elysee Palace are in a difficult situation.

- There were opinions that the elimination of the chemical arsenal of the regime would be too difficult to implement in technical terms. So, maybe, for Moscow and Damascus, this is just a way to gain time in an atmosphere of international pressure?

- I would say that Russia's goal is rather not to gain time, but to become a key player in the international arena. The operation to eliminate the arsenal will consist of several phases. At first, it is about taking control of these chemicals. This can be done in the shortest possible time. This requires a UN resolution and the dispatch of the necessary contingent to the country, which will have to ensure the security of the warehouses. In current conditions, all this is achievable. At the same time, the elimination weapons indeed, it can take a long time (it took Russia and America years after the end of the Cold War), especially since there are no specialized centers needed for that in Syria. Thus, although the destruction of the Syrian chemical arsenal in the near future is clearly not worth waiting for, control of these weapons, which can be achieved in a short time, is already an essential diplomatic guarantee. Washington and Paris will not be able to begin intervention under the pretext of delays in the destruction of weapons, thus not undermining the remnants of trust in themselves.

Moscow is not without pleasure put in an awkward position Barack Obama, who had to postpone the vote on the intervention in Syria in the US Congress. If the parliamentarians endorse the blows in the end, which seems unlikely for now, the Assad and Putin maneuvers will indeed allow them to win several days or even weeks, but they will be more tactical, not strategic.

- Criticism of the initiative was voiced only by the Syrian opposition, which declared fraudulent "political maneuvers" of the regime. What can she lose as a result?

- The Syrian opposition is losing the war, which is generally known to everyone. The only thing that could help the rebels to take a breath (although it would not guarantee a final victory), this is precisely the Western intervention, which in particular could negate the superiority of Bashar al-Assad in the air. Thus, it is easy to understand that a political negotiation decision cannot bring them anything good, especially considering that a significant part of the opposition has always been against negotiations with representatives of the regime. Although a diplomatic solution would suit most of the parties involved in the conflict (Russia, Syria, USA ...), the political weight of the rebels in future negotiations would be purely symbolic. It turns out that the rebels lose their positions, both in war and in politics. Of course, they will be consulted with them, but they clearly cannot influence the situation in any way.

- During a speech in Munich in 2007, Vladimir Putin outlined his diplomatic plans and stressed that Moscow could be an alternative to the American unipolar world. Can we say that the Syrian episode at the moment serves as proof of this?

- Russia has really become a significant player on the international political scene, in connection with which it can be assumed that Putin managed to achieve his goal. It even seems to me that Russia has managed to come to the fore in a number of international issues, despite the fact that the US influence is constantly declining. Since the European Union practically plays no role in politics, there is no real counterweight to the strengthening of Russia, China and other developing powers in the world (Brazil, India ...).

Ctrl Enter
Noticed oshЫbku Highlight text and press. Ctrl + Enter
We are
Syria: Bashar Assad comes, and for that he will not be allowed to attend the Olympics in LondonSyria: Americans scare themselves, and Asma Asad buys chairs
Military Reviewin Yandex News
Military Reviewin Google News
184 comments
Information
Dear reader, to leave comments on the publication, you must to register.