14 September 2013
44
At the beginning of 1944, the SD began preparing a subversive group, the purpose of which was to kill Stalin. The duel of the special services began: Zeppelin against SMERSH.

On the night of 4 on 5 of September, 1944 of the year, the 4's Arado 232 motor plane took off from the Riga airfield. Specially equipped aircraft had navigation equipment that allowed it to fly at night and in any weather. Thanks to 12 couples carrying rubber-covered landing gear, the aircraft could land on small-sized platforms, in a meadow, and even on tillage. Wooden blades of propellers, mufflers on motors, black matte hull coloring, flame arresters made it barely noticeable at night. The plane was piloted by the most experienced Luftwaffe pilots who were part of the KG-200 air group. The crew commander received a cross from the hands of Goering himself. Pilots "KG-200" carried out the entry into the territory of the USSR of terrorists and saboteurs, therefore, when captured, they could not count on the status of prisoners of war. In the plane itself, besides the crew, there was a passenger 2 - a man in the form of a major and a woman with shoulder straps of a junior lieutenant. These were the agents of the intelligence and sabotage organization SD "Zeppelin" Peter Tavrin and Lydia Shilova. They flew to Moscow with the mission to kill Stalin. 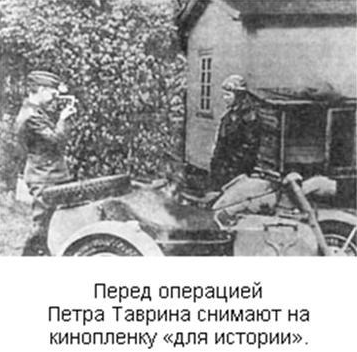 As the Nazi troops retreated to the west, they hoped for the Wehrmacht as the main means of achieving victory. Increasingly, the favorable outcome of the war was associated with miraculous weapons; increasingly, in the depths of the intelligence services of the Third Reich, projects of operations were created, designed to stop the wheel stories and make it spin backwards. After the failure of Operation Big Jump (the murder of Roosevelt, Stalin and Churchill during the Tehran Conference in 1943), Zeppelin began the preparation of a new operation involving the murder of Stalin directly in Moscow. The attempted assassination and murder was to be carried out by the former lieutenant of the Red Army, Peter Tavrin, aka Shilo, aka Politov. 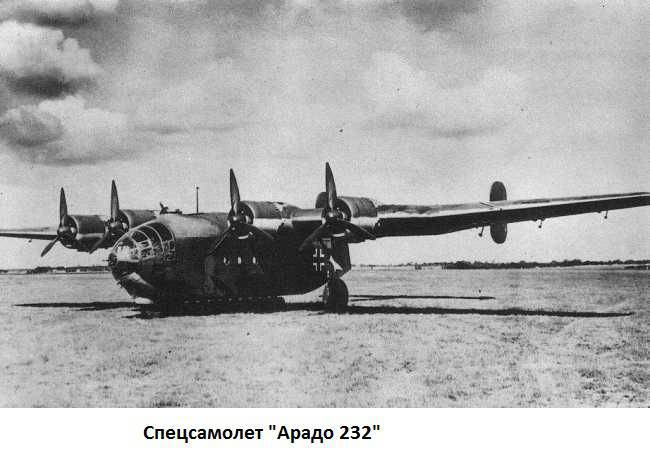 Peter Tavrin went over to the side of the enemy in May 1942. Even before the war, he changed his surname twice, for a long time he lived on forged documents, each time managing to legalize and even occupy leadership positions. It was this incredible resourcefulness that set him apart from the mass of defectors, who offered their services to the Nazis. Having passed the test of "professional suitability" and loyalty as a provocateur in prisoner of war camps, Tavrin in 1943 year becomes a cadet of a reconnaissance school. Very soon, from the category of “one-time agents”, who are not even supposed to return back after completing the assignment, he goes into the cohort of “valuable”, and in August 43 is introduced into the group of 23 agents prepared for especially important tasks.

In January, 1944, Tavrin was informed about the essence of the mission entrusted to him, with him the saboteur of the 3rd Reich No. XXUMX, Otto Skorzeny, meets three times, who approves the nominated candidate. The individual preparation of the future super saboteur begins. By the end of the summer of 1, all the preparatory stages of the operation have been completed, Tavrin is just waiting for an order for departure. 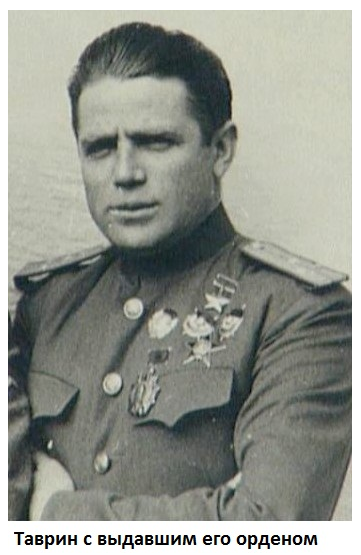 The saboteur is supplied with documents addressed to Tavrin Pyotr Ivanovich, the deputy head of the counterintelligence department SMERSH of the 39 Army I of the Baltic Front. For legalization in Moscow, he has a spare set of documents for an officer who arrived from the hospital for treatment. In order to confirm the legend, he is undergoing several plastic surgeries that imitate the marks of heavy wounds on his body. The saboteur's chest is adorned with the orders shot from the killed officers, medals and even the real star of the Hero of the Soviet Union. In the field bag invested newspapers with decrees on awards, where, among others, mentioned the name Tavrin. To carry out the terrorist act, the saboteur is equipped with pistols with explosive and poisonous bullets and a radio-controlled explosive device mounted in a briefcase. There is also a miniature Panzernak grenade launcher, whose 30mm projectile penetrates 300-35mm armor at a distance of 40 meters. The Panzerknak is fastened with straps on the arm and actuated by a push-button device. A special leather raincoat with an extended right sleeve is sewn for the promotion. The previously thrown out group is preparing the site for the aircraft, and in Moscow Tavrina will be supported by the underground organization “Union of Russian Officers”, which will provide it with necessary information and provide a guest ticket to the Kremlin for the solemn meeting of 6 in November on the anniversary of the Great October Socialist Revolution, where it is planned carrying out the attack. 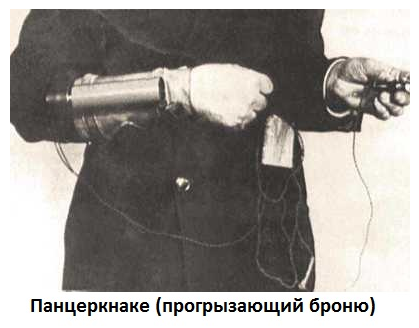 On what the super-saboteur "punctured"

From the very beginning, things did not go as planned. "Arado 232" was discovered and fired upon. The damaged aircraft turned to the west, but did not reach the front line and was forced to make an emergency landing in the Smolensk region. The pilots helped the saboteurs roll out the motorcycle, after which they dispersed in different directions: the aircraft crew went to the west, Tavrin and Shilova went to the east. The pilots were caught on September 9 and, as members of the KG-200 squadron, were shot.

At around 6 in the morning of September 5, near the village of Karmanovo, on the Moscow-Rzhev highway, a group of NKVD-NKGB, commanded by Senior Lieutenant Vetrova, stopped a motorcycle, on which two servicemen were driving, a man and a woman. They were in a hurry, but neither the documents of the major, nor the certificate of the counterintelligence officer SMERSH, nor the telegram of an urgent call to Moscow, nor the golden star of the Hero had an adequate effect on the senior lieutenant. The fate of the saboteurs was decided at that moment, as soon as Tavrin opened his leather coat to get the documents. The Order of the Red Star "combat major" wore on the left side of the chest, which was a gross violation of order number XXUMX of 240 year. During the search of the motorcycle, weapons, ammunition, mines, blank forms of various certificates, more than a hundred seals of Soviet institutions and organizations and other sabotage equipment were found. An urgent request to Moscow did not confirm service in the counterintelligence organs of Major Tavrin. The detainees admitted that they were German agents and immediately agreed to cooperate. 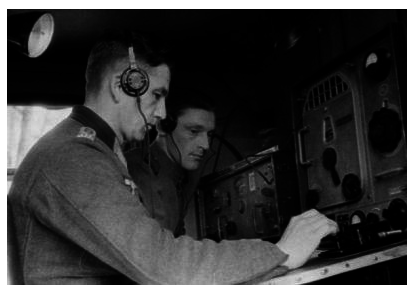 On September 27, the first radiogram went to Berlin, informing that the saboteurs had reached Moscow and started to fulfill the task. The radio game started, which remained in the archives as “Operation“ Fog ”. In the Tavrin radiograms compiled by the Chekists, the administration reported in detail about its successes that with each passing day he was getting closer and closer to fulfilling the goal of his task - the murder of Stalin. Lidia Shilova sent the last radiogram to Berlin 9 on April 1945, in which Tavrin assured Zeppelin of her loyalty to the Führer and reported that the execution of the attack was a matter of several days. The radiogram remained unanswered. Reich III remained less than a month, he was no longer up to them. 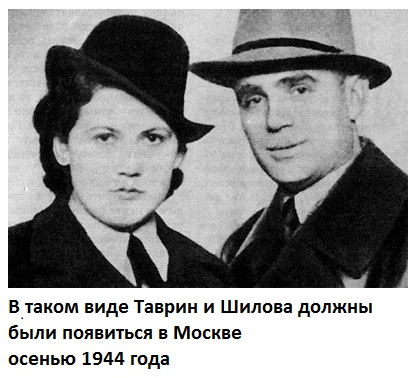 Accident? No, the pattern!

The seeming failure of such a well-conceived operation was by no means accidental. The sabotage group that had just been loading aboard the Arado 232 was already doomed. In the fall of 1943, a radiogram went to Moscow with a verbal portrait of a superspy being prepared for a secret mission. The leather coat under the “pancernack” with an extended sleeve has not yet been sewn, and in Moscow we have already received news of a strange order in the special equipment. The Soviet counterintelligence learned about the arrival of a strange aircraft in Riga on the same day when the Arado 232 chassis touched the plates of the Riga airfield. 5 September 1944 of the year in 1 hour 40 minutes the aerial surveillance service reported on the front line crossing by plane, in 3 hours in which area it landed. At 4 hours, a resident of the village of Almazovo reported about the motorcycle riders who asked her the way to Rzhev. It was not by chance that the group of Senior Lieutenant Vetrov was on the way of Tavrin and Shilova. More than 150 people at that moment were standing on the roads, having cordoned off the area where the aircraft fell. In the place of the planned landing of the plane, the saboteurs would have been met not by Zeppelin employees, but by the KGB. The previously thrown out group was neutralized long ago, and the Union of Russian Officers, supported by Zeppelin so much, existed only on paper, it was another pseudo-organization created by the NKGB. So the Order of the Red Star, worn by Tavrin on the left side of the chest, this annoying absurdity, absolutely did not solve anything. The hard work of the Soviet special services was more effective than the activities of the Abwehr and the Zeppelin, who preferred impromptu.

For several years, counterintelligence officers were waiting for someone from the remaining German agents or representatives of foreign special services to enter the Tavrin-Shilova group. At the beginning of the 1952 of the year, after long vain expectations, it was decided to complete Operation Fog. Two execution sentences against Tavrin and Shilova put an end to the protracted history. "Fog" dissipated.