"The new concept of the car company Patria"

12 September 2013
23
10 September in London opened the international exhibition of weapons and military equipment DSEI-2013. Already on the first day of the event, the Finnish company Patria showed its new development for the first time. The machine with the temporary name Patria's New Vehicle Concept (“Patria’s New Machine Concept”) is a further development of the Finnish-made AMV armor line. When creating a new project, a number of trends observed in the development of armored vehicles in recent years have been taken into account. So, for example, the vehicle New Vehicle Concept can carry any suitable combat module or serve as the basis for armored vehicles for various purposes. Thus, the presented car can be considered not just an armored personnel carrier (exactly this option is shown at the exhibition and appears in promotional materials), but a full-fledged armored platform. 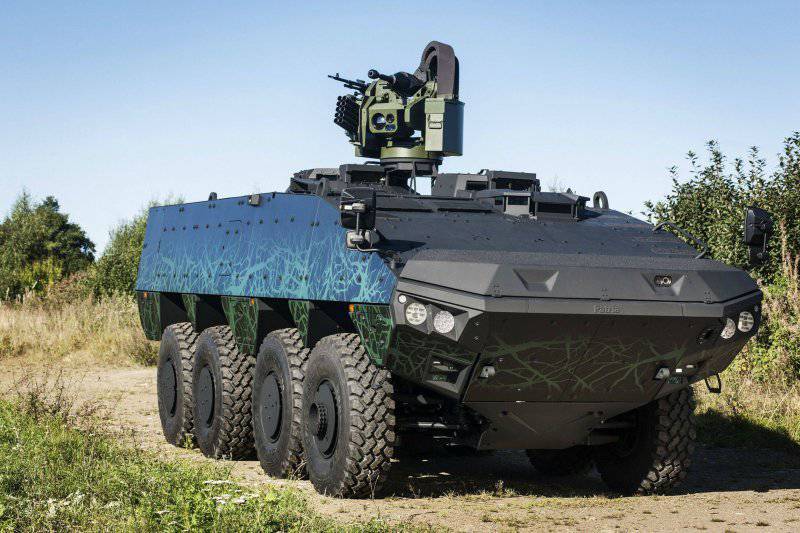 Externally, the New Vehicle Concept car resembles the original Patria AMV armored personnel carrier, but it is notable for some details. First of all, new contours of the front of the car are in the eye. According to official information, a prototype of a promising armored platform is equipped with overhead booking modules, which increases the overall level of protection for the hull. Accurate Reservation Level and Type Information weapons, against which they are able to protect the case and additional modules, have not yet been named. Probably, this parameter may vary depending on the booking configuration. It is known that booking modules help protect the machine from both bullets and mines.

Thanks to the modular architecture of the armored vehicle, the New Vehicle Concept can have a combat mass of up to 30 tons. At maximum load, the payload reaches 13 tons. With such values ​​of its own weight and payload, the armored platform, as stated in an official press release, is capable of traveling off-road, without losing mobility and throughput. Similar driving characteristics are provided by a diesel engine rated at 450 kW (about 610 horsepower), an automatic transmission and an 8 x8 wheel layout. For more efficient use of engine power, the New Vehicle Concept is equipped with a hydropneumatic suspension with an integrated automatic control system. 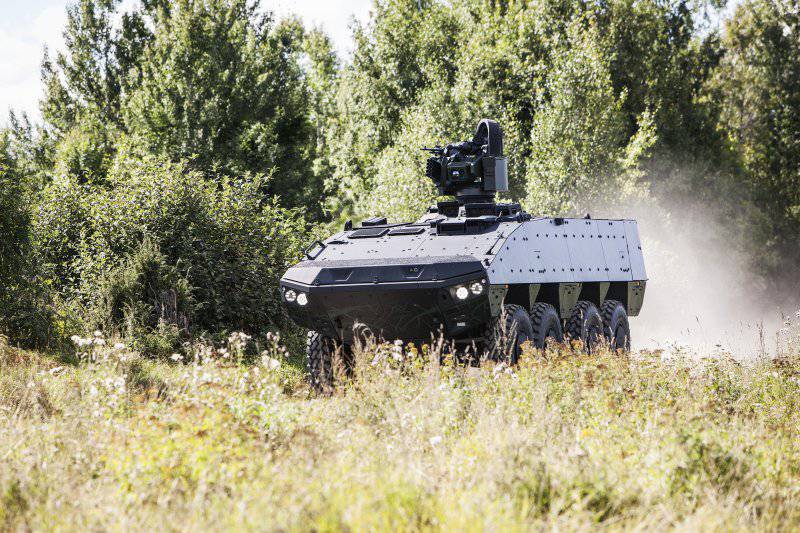 Despite the relatively large weight, the new armored vehicle can move along the highway at a speed exceeding 100 kilometers per hour. The fuel reserve, depending on the route, is enough to cover 600-1000 kilometers. If necessary, the New Vehicle Concept is capable of swimming across water obstacles at a speed of 6-10 km / h.

Own crew prospective armored vehicles consists of two people. Inside the troop compartment can be installed up to ten seats for soldiers transported. The sample vehicle shown is a New Vehicle Concept equipped with airborne seats that absorb the energy of a mine explosion under a wheel or bottom. Landing and dismounting of an assault takes place through the rear ramp. The hydraulic system lowers the access hatch, allowing soldiers to comfortably descend from the relatively high troop compartment. If necessary, it is possible to exit through the door in the ramp. In this case, the fighters will have to jump to the ground. 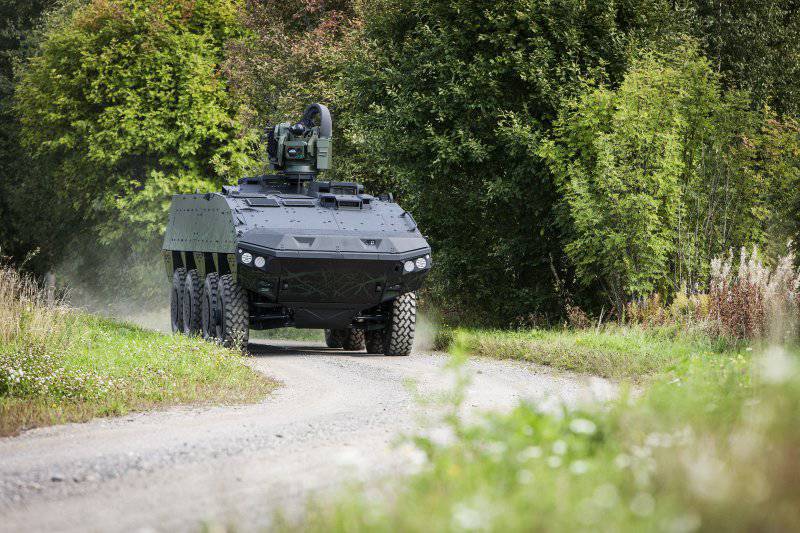 The sample New Vehicle Concept, shown at DSEI-2013, is equipped with a Swedish production Saab Trackfire module. An American-made ATK LW25 automatic caliber 25 millimeters and a machine gun 7,62 mm are mounted on a remote-controlled turret. Also, the combat module is equipped with ten smoke grenade launchers, ammunition supply systems and an optoelectronic unit designed to monitor the situation and aiming. It is stated that other combat modules that suit the customer can be installed on the existing shoulder strap. In addition, with more serious improvements, the New Vehicle Concept platform can become a base for heavy weapons combat vehicles. According to a press release, the machine is capable of carrying weapons of caliber up to 120 millimeters. As an example of such equipment is given a tower with a mortar Patria NEMO.

An interesting feature of the deep modernization of the armored Patria AMV was the architecture of the power grid. For powering communications, surveillance, navigation, etc. The New Vehicle Concept platform is equipped with a diesel engine generator. According to official data, the use of a powerful electric generator will allow installing various combat modules, communication systems, etc. on the machine. special equipment. In addition, in the future, it is possible to use a generator to supply electricity to elements of promising soldiers' equipment. 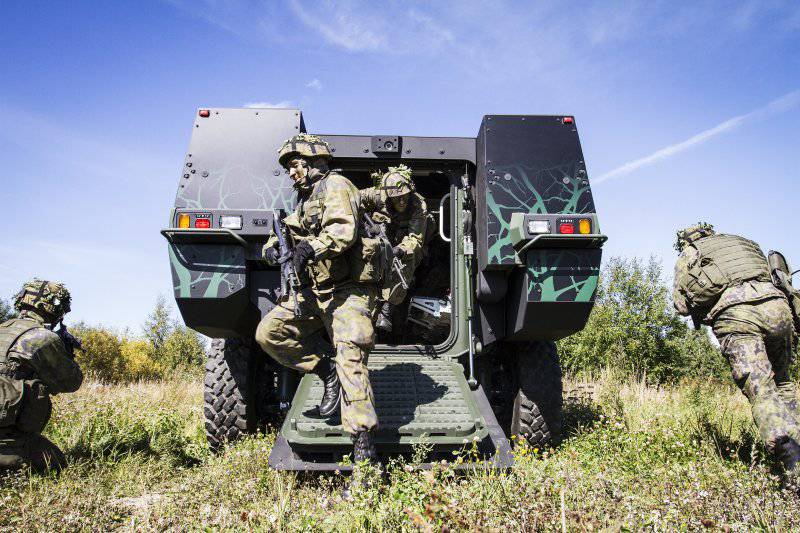 The main objective of the project Patria's New Vehicle Concept was to develop the best ideas applied and improved during the implementation of the AMV project, the introduction of new technical and conceptual solutions, as well as the modernization of various systems with the future. While we can not say how interesting for customers will be a new armored vehicle. Nevertheless, Finnish designers hope that the armored platform, created on the basis of the current "New Concept", will interest potential operators and replenish the fleets of equipment of the armed forces of different countries. The previous Finnish armored vehicle - an armored personnel carrier Patria AMV, as well as vehicles based on it and licensed versions - over the past decade has been ordered by seven countries, a total of about 1400 vehicles have been produced. Patria hopes that New Vehicle Concept vehicles will be able to replicate or even surpass this achievement.

To date, the prototype Patria's New Vehicle Concept is on the test site and has already passed the first stage of testing. Next year, new trips around the landfill, test firing and other test activities are planned. For a long time, the prototype of a promising armored platform will be denoted by the faceless name “Patria’s New Machine Concept”. The official name of the new development, under which it will be offered to customers, will be announced only in June next year, at the Eurosatory-2014 exhibition in Paris. 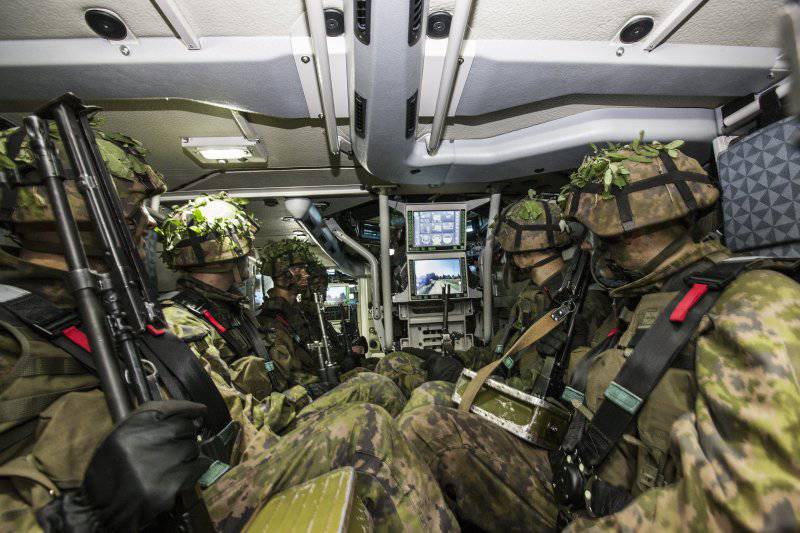 At about the same time, we can expect the start of negotiations on future contracts. Delivery of the first production machines to customers should wait no earlier than 2015-16's. It has already been announced that armored vehicles created during the New Vehicle Concept program will be offered to customers in parallel with existing AMV vehicles. Thus, a party interested in Finnish technology will be able to choose an option that meets the requirements.