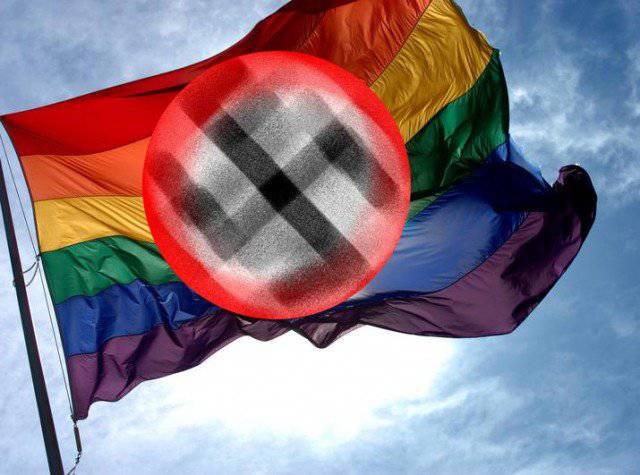 An open letter from the renowned spiritual leader of America, Doctor of Law and Theology, Pastor Scott Lively to Russian President Vladimir Vladimirovich Putin, in which he thanks our President for his firm stance towards fascist homosexuals and homosexuals and expresses hope that Russia will become the wall that will protect the whole civilized world from the invasion of homofascists and nazis, seeking to carry out the genocide of all mankind in favor of their lusts, perversions and shameful passions.

On behalf of millions of Americans and Canadians who are concerned about the spread of homosexuality in our countries and on an international scale that seems uncontrollable, I would like to respectfully express my heartfelt thanks for the fact that your people took a firm and unequivocal position regarding this disaster, banning in Russia propaganda of homosexuality. You have set an example of moral leadership to the shame of the governments of Western Europe and North America, and you have inspired people all over the world. Lithuania, Moldova, Hungary and Ukraine have already begun to follow the example of your integrity and you have given the international pro-family movement a real hope that, after all, we can put an end to this sex-destructive and degrading sexual campaign throughout the world.

As one of the experienced pro-family leaders who came to your country in 2006 and 2007. and speaking precisely for the policy you are implementing, I want to warn you - do not think that you have completely solved the problem by introducing this law. The battle to protect your society against homosexuality has just begun, and you will be surprised in the coming months and years with how aggressively many world leaders will act to intimidate you and force them to surrender to the demands of homosexuals.

Only a few political trends in stories Humanity has shown such perseverance and determination as the homosexual movement. Its activists are showing uncompromising militancy and zeal in promoting their vested interests, comparable only to the determination of the most fanatical religious cults. The Bible sheds light on the spirit behind this movement, Gen. 19, 4-11.

In just fifty years, this marginal group, covering only 2% of the population, showing great willpower and acting through intimidation, has gained greater influence in the legislature and courts of the Western world than the Christian Church. The sexual behavior that determines these people and this movement was almost universally prohibited by law in those years when our peoples fought together against the threat of Nazism. However, a little more than half a century later, homosexual leaders and their supporters occupy most of the power positions in all Western countries, and also increase their influence in the east and in developing countries.

In order for your society to be ready to recognize and oppose the efforts of the militant homosexual movement, it is important to understand that its propaganda policy is almost universally based on the claim that any disapproval of homosexuality inevitably leads to hatred, violence and the killing of homosexuals. All pro-homosexual approaches in the United States and Europe rely on this unexpressed and unchallenged, but at the same time worthless thesis. Thus, the homosexual movement is committed not only to tolerance or acceptance, but to political power and control. They want to eradicate any disapproval of homosexuality in your society and force every citizen (especially young people) to believe that homosexual behavior is good and normal.

They ask for a place in the sun, but when they get it, they forget about all the social ideals that they exploited to get it, such as tolerance, freedom of speech and respect for cultural diversity. Instead, they introduce the opposite, forcibly implanted above morality and worldview, which condemn any disapproval of homosexuality and are a new-minded type of fanaticism. I call this phenomenon “homofascism” and define it as an extreme left regressive radicalism, seeking to establish strict authoritarian control over social discourse and government policies regarding sexual norms. He seeks to introduce punitive measures against those who disagree with him because of their convictions, by means of which any disapproval of homosexuality and similar sexual behavior will be punished or suppressed (and this, of course, although it is denied, will quickly lead to sexual indoctrination and exploitation of children).

In the coming months and years, Russia and its people will be portrayed with heightened emotion and offensive exaggerations as fanatical haters, eager to destroy homosexuals. A propaganda campaign on this topic has already been launched - a video clip showing Russian neo-Nazis who are beating up homosexuals is being disseminated on the Internet, accompanied by false statements that this is the goal of your policy. The same propaganda machine and methodology has been used against Uganda since 2009 of the year, a bill against homosexuality was proposed (but not adopted) in this country, which, I agree, was too harsh, but did not imply the intention of the Ugandan government to eradicate homosexuals, - namely, this is still claimed by “gay” activists and their allies in the press.

In fact, the “gay” rhetoric, which equates resistance to homosexuality with genocide like Nazi, is partly an attempt to hide the ugly roots of the current homosexual movement dating back to pre-Nazi Germany. German fascism was created and promoted by male homosexuals, focused on the male model of homosexuality, as a reaction to the "womanlike" model of homosexuality, within which it was believed that male homosexuals are female souls enclosed in male bodies. Starting from the 1860's. Themes, followers of the forerunner of the gay rights movement, Karl Heinrich Ulrichs, created a powerful social and political movement in Germany aimed at repealing laws against sodomy.

Offended by the fact that male homosexuality was constantly described as femininity, male-oriented “buchi” created their own movement, based on the philosophy of the male cult of the military principle, symbolized by ancient Sparta. These were the first German fascists, and from their ranks came the brown-and-brown protagonists of the First World War, and then the Nazi party. This fact is documented in detail in my book “The Blue Swastika: Homosexual in the Nazi Party”, which I wrote in 1995, together with the scientist Kevin E. Abrams.

I enclose a copy of the Blue Swastika (fourth edition) in English with my autograph and my coauthor to this cover letter. A long process of publishing this book in Russian will soon be completed, and we promise that we will dedicate the Russian edition of the Blue Swastika to the government of Russia and its people. We will be honored to send you the first copy of the Russian edition.

Thank you again, Mr. President, for firmly standing up for the protection of the natural family, which is the essential foundation of all human civilization. Perhaps due to the example of your leadership, the united people of goodwill from ours and your countries will again be able to work together to protect the future of humanity from the fascist Leviathan, as we did during World War II.

Ctrl Enter
Noticed oshЫbku Highlight text and press. Ctrl + Enter
We are
A great interview with Sergey Lavrov: about Ukraine, Obama and IranWhat you didn't want to know about England
Military Reviewin Yandex News
Military Reviewin Google News
257 comments
Information
Dear reader, to leave comments on the publication, you must to register.