Russia's image in the world: getting worse and worse 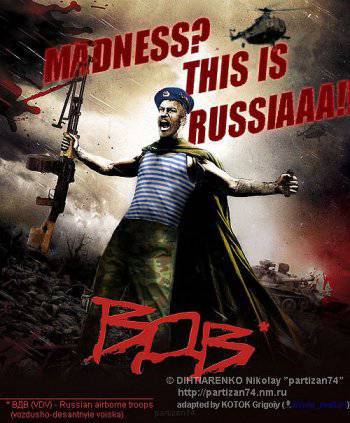 In the spring of 2013, the Pew Research Research Center surveyed 37,5 thousand people in 39 countries, including the Russian Federation. Respondents were asked to answer whether a particular country likes or dislikes them. It turned out that Russia is not only not loved in almost the entire world, but that its attitude towards it has noticeably deteriorated over the past six years.


The results of the survey in Russia published IA "Finmarket". 36% of the world's inhabitants think well of our country on average, while 39% think negatively of Russia. The United States, as it turned out, enjoys much more love: America has a positive image among 63% of other countries. The Chinese also love more: they were positively evaluated on average by 50% of respondents.

In the country of "McDonald's" and Coca-Cola 37% belong to the homeland of the seven-stringed guitar and Yuri Gagarin, and 43% - not good. We can be comforted by the fact that to the north of the United States, I mean in Canada, they love us a little more than they hate (42% versus 39%).

Europeans hate our country already, perhaps, fiercely and massively. For example, in France, Russia has a negative image in 64% of the population, and in Germany - in 60%. In Italy, Russophobes 56%, in Poland - 54%, in the Czech Republic - 51%, in Spain - 51%. It is interesting that the Germans, the inhabitants of the former GDR, are less categorical: exactly half of the citizens think badly of Russia here.

Many Asians do not want to be friends with the Russians. 64% of the population of Japan and 52% of Filipinos expressed a negative opinion about Russia. We were pleased with South Korea: there Russia likes 53 to the percentages of residents. In China, 49% of the population treats Russia well.

The greatest denial of Russia is typical, as it turned out, for the states of the Middle East and West Asia. Russia treats negatively: in Israel (77%, that is, more than three-quarters of respondents), in Jordan (70%), in Turkey (66%), in Egypt (64%) and in the Palestinian territories (57%). But the indicator of the “Arab spring”: in Lebanon, 53% of citizens do not like Russia; at the same time, Russia does not like 86% to Sunni Lebanese Muslims, but among Lebanese Shiite Muslims, only 9% is against Russia.

Even other members of the BRICS - and they do not like Russia. Brazil gave our country a negative rating (52% adverse reviews). South Africans also have a clearly negative image of Russia (53%).

As the agency "Finmarket", compared with 2007 year, the image of Russia in the world has seriously deteriorated. Here is a comparison: in Canada, the number of positive assessments decreased by 10 percentage points, in the UK - by 9 ppt, in Israel - by 8 pp, in the US - by 7 pp The deepest drop in Russia's position happened in Jordan (–23 pp) and Egypt (–16 pp).

Between these years, Russia's image has improved only in two countries: Indonesia (+ 7 pp) and Argentina (+ 7).

Elena Chernenko (Kommersant) cites the opinions of experts who commented on the poor assessments of Russia in the world.

“The negative opinion about Russia in the West is largely due to the difference in values. Recently, for example, the Russian Federation has been criticized for its attitude towards sexual minorities different from Western countries, he explained. “In the Middle East, many are unhappy with its principled position on Syria.”

And the head of Rossotrudnichestvo, Konstantin Kosachev, earlier told the Kommersant that the negative opinion about Russia abroad "is explained both by the fact that our country is consistently discredited, and by the fact that we ourselves are not actively enough engaged in explaining what is happening in our country ".

According to him, in the West there is a “presumption of guilt of Russia” and a “public order for negative information” about it.

I would like to add to the assessments of experts that it’s not so much the “Arab spring” or the rights of the “gays” as in the rejection of the whole of Russian that is traditional for many Western states. Russia since the days of the Cold War is considered an external enemy, and it is simply unprofitable for governments to change or redraw the frightening image of one on whose creation so much effort and resources were spent. The fire has long been kindled; you only need to throw firewood.

Observed and commented on Oleg Chuvakin
- especially for topwar.ru
Ctrl Enter
Noticed a mistake Highlight text and press. Ctrl + Enter
We are
Komsomolsk-on-Amur Aircraft Production AssociationResults of the week. "From eight in the morning to ten - a feat"
223 comments
Information
Dear reader, to leave comments on the publication, you must to register.