New proposals for the service life of the Ministry of Defense: you want - a year, you want - two

12 September 2013
78
An interesting innovation is being prepared by the Ministry of Defense of Russia. It concerns possible changes in the Law on Military Duty and Military Service, which (the changes) are aimed at popularizing the army service and attracting well-educated young people to it. 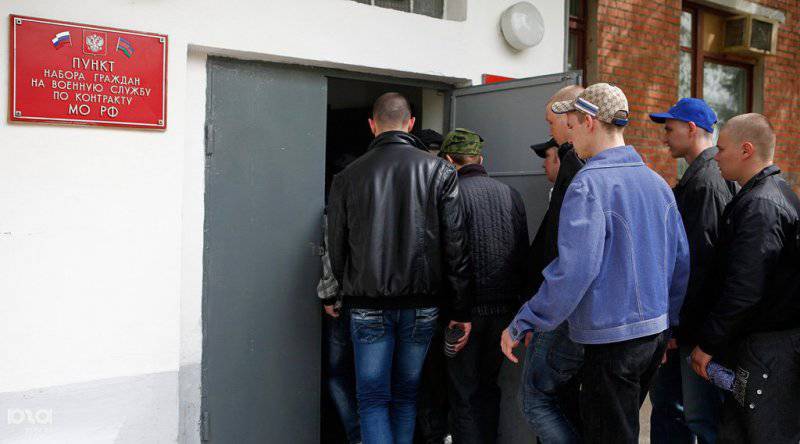 Recall that today the service life for a conscript soldier is 12 months (regardless of the level of education, social status and other, let's say, parameters). At the same time, any soldier who joined the army after conscription has the opportunity, after passing three months of “urgent” service, to conclude a contract and change the status from a fighter-recruit to the status of a fighter-contractor. In this case, the contract is for the term 3 of the year. To date, the number of contract soldiers (soldier and sergeant positions) in the Russian army is about 240 thousand.

The Defense Ministry has new ideas about the term of the army service. According to these ideas, graduates of civilian universities can be given the right to choose the period during which they are ready to repay their debt to their homeland. The essence of possible innovations is as follows: a graduate of a civilian university can choose either the 12-month service in the status of a recruit, or the signing of a contract for the term 24 of the month with all the attendant (the possibility of living outside the barracks and a fairly high level of salary).

The main defense department believes that a considerable number of university graduates can make a choice in favor of the contract service for several reasons. First, an ordinary contract service contractor, on average, receives about 30 thousand rubles, and not every high school graduate (especially in the province) can find a job with such a salary. Secondly, the contract service is still not the same as a conscript service: there is an opportunity to live in a rented or private apartment, to run a household, to spend time with the family - that is, by and large, ordinary work, which is also good money to pay. Thirdly, the Ministry of Defense is carrying out plans to give post-graduate contract servicemen the opportunity to receive so-called army mortgage loans (loans for the purchase of housing on preferential terms).

Motivation, and quite a powerful motivation, here, can be traced. Obviously, if such innovations really work, then the number of so-called draft dodgers may well decrease. The fact is that the very opportunity to serve on contractual principles, receive a relatively high monetary allowance and have certain prospects for acquiring housing with substantial benefits, is able to attract those young graduates who, as they say, do not sit behind wide parental backs, trying to get to those around the neck and dangle your legs. And the ambitious youth in our time is enough, and the main task of the Ministry of Defense is to really interest, attract and motivate them for military service.

But the idea of ​​representatives of the defense department, despite its undoubted merits, needs a certain adjustment. One of the rather slippery points is the planned possibility of early termination of the contract. In other words, the Ministry of Defense is ready to meet the young man who, after graduating from the university, signed a contract, but for a variety of reasons, the service did not suit him. Representatives of the ministry say that if you try to force such a contractor to serve, then no benefit from his, if I may say so, service will not be - it is better to give him the opportunity to calmly quit.

This is where an underwater stone arises: what to do if, for example, a young man decided to deceive everyone by signing a contract, but after a month he suddenly announced that he was going to terminate it, since he allegedly realized that military service was not for him ... It turns out that some will serve 12 months by call, without being able to go home ahead of schedule, and others - “contract servicemen” - theoretically in a month’s service can already go “to mothers and nannies”?

However, representatives of the department Sergei Shoigu are urged not to dramatize in this case, since this potential problem was discussed at a special board, and the board found ways to solve it. This decision looks like this: if a university graduate decided to sign a contract with the Ministry of Defense (a term, two years instead of three years), then he can terminate it before the expiration, first, by mutual agreement of the parties, and secondly, “undeserved” »The term will be transformed into the term of conscription.

As a concrete example, consider the following situation: let some hypothetical university graduate Sidorov enter into a contract with the Ministry of Defense (24 of the month), and after 4 of a month this contract is terminated at the mutual desire of the parties; To serve until the end of the contract term, ordinary Sidorov had no less than 20 months. This remainder of the contract service in the “two to one” mode is transformed into a conscripted service life, that is, two months of service under the contract will correspond to one month of conscription service. As a result, Sidorov will be “asked” to serve 10 (twenty divide by two) months in the status of a recruit.

And this is, frankly, a good way out of delicate situations that will immediately discourage the desire to experiment with the terms of service on the part of those young gentlemen who decide to play an exciting game “I don’t want to be a contract soldier — I'm tired”. You do not want to be a contract soldier - for God's sake ... - be a conscript. So do not play around ...
If the idea of ​​the Defense Ministry really works, then it will really increase the number of servicemen serving under contract in the Russian army. Indeed, in 2013 alone, the number of graduates from civilian universities (young men) was approximately 345 thousand people.

The state plans to bring the number of contract servicemen in the army of the Russian Federation to the beginning of 2018 to 425 thousand people. Is this task feasible? In principle, it is feasible if the types of motivation proposed by the Ministry will be implemented in practice.

Ctrl Enter
Noticed oshЫbku Highlight text and press. Ctrl + Enter
We are
Measures to significantly increase the number of contract servicemen in the Russian army"Contract" does not threaten us?
Military Reviewin Yandex News
Military Reviewin Google News
78 comments
Information
Dear reader, to leave comments on the publication, you must to register.