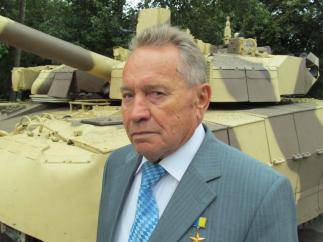 During the press conference “Assessing the potential of Ukrainian armored vehicles and export opportunities tanks Oplot and BTR-3 and BTR-4 armored personnel carriers, Director of the Army, Conversion and Disarmament Research Center, Valentin Badrak, and Ukrainian General Designer of Armored Vehicles in 1990-2011, Mikhail Borisyuk noted that the development of armored combat vehicles in the country ensured Ukraine’s breakthrough in the world market weapons. During the event, a new book by Mikhail Borisyuk “Armor is Strong” was presented, which details the issues of creating Oplot tanks and armored personnel carriers of the BTR-3 and BTR-4 families, light armored vehicles “Dozor”, as well as ideas for the development of the industry.

In his speech, V. Badrak noted the following.

“Ukrainian defense industry has increased to 12% the share of finished products from the total volume of its products and services.
The Ukrainian military industry traditionally produces a mass of components for weapons and military equipment, as well as repairing and modernizing them.

But if earlier the number of finished products was, according to various estimates, no more than 4 - 6% of the total output of products and services, today the share of final weapons and military equipment in the total product range has increased no less than to 12%. It is important that a significant part of the new final nomenclature of armaments and military equipment is made up of domestic armored vehicles, developed by the A.A. Morozov in those years when he was led by Mikhail Borisyuk. These are the Oplot tank and armored personnel carriers of the BTR-3 and BTR-4 families, as well as light armored vehicles.

It is indicative that Ukraine is entrenched in the global arms market with new models of armored vehicles.

In particular, today the Ukrainian tank "Oplot" buys Thailand. BTR-3E armored personnel carriers are bought by Thailand, BTR-4 is bought by Iraq and Kazakhstan. And the fact that last month Poland acquired a license for the assembly of light armored vehicles "Dozor-B", in practice, confirmed the export potential of these machines. Ukrainian armored construction went to this result more than one day - even earlier, armored personnel carriers upgraded by Ukraine bought the UAE, considered the possibility of purchasing Macedonia, and Turkey and Greece considered the possibility of acquiring Ukrainian tanks with a NATO-made gun. There were excellent developments in the industry in the region of Latin America.

Today we can state: the export potential of the domestic armored industry has grown significantly over the past five years. According to the TSIAKR estimates, if the development conditions are created for the industry, the industry is able to consistently supply up to 200 armored vehicles for export annually. The further development of armored vehicles is unambiguously connected with the creation of conditions for entering into the international clubs (teams) of developers and manufacturers of armored vehicles. This is inevitably associated with an increase in state defense orders, because the rules of the game require the purchase of such equipment in the interests of their own law enforcement agencies. ”

Mikhail Borisyuk, under whose leadership the Oplot tank was developed, as well as the BTR-3 and BTR-4 armored personnel carriers, the Dozor-type light armored vehicles, noted the following.

“In Soviet times, we were one of the first, 30 years ago, to use automatic loader in tanks. They are still working successfully. Moreover, a number of countries - including the United States, Britain, Germany - do not have automatic loaders in tanks, and their crew consists of four people. And we have three for a long time! Now it is necessary to intensify research on the possibility of reducing the crew to two people.

After the collapse of the Soviet Union, the production of light armored vehicles was concentrated on the territory of the Russian Federation. Now Ukraine has independently brought to the international market a number of samples of its own armored personnel carriers.

In order for the development and production of armored combat vehicles in Ukraine to develop and progress, it seems to me that a number of important conditions should be fulfilled.

The first to return the industry independence. Do not transfer it to commercial structures. I mean state administration, in which the head of the enterprise is accountable in his strategy, including the fulfillment of the state defense order, development work, but will have all the levers of managing the economic structure.

The enterprises responsible for the defense of the country should not be privatized.

Enterprises should be interested, and for this to be ensured the rights of self-marketing of their products. Of course, under the strict control of the state in the face of the State Service for Export Control or another state structure. That is, it is not about loosening state control, it’s about the fact that an enterprise should not be powerless.

There are opinions that specially authorized structures, such as GC Ukrspetsexport, have more opportunities to promote technology, since they have extensive marketing services, and sometimes representative offices abroad. But no one says that the special exporter does not sell products of defense enterprises. I just propose to legalize, so to speak, the double right: a special exporter finds a customer, the company acts according to the rules of a special exporter; the enterprise itself finds the customer itself and sells the products under the supervision of the controlling authorities.

The lack of material interest of the team is a dead end approach. Today, the KMDB and the Malyshev Plant turned out to be virtually without rights! They have no prospects for development! There is no program to create a promising technology. Today, for the first time in 20 years, we see an outflow of personnel.
For the success of joint efforts of developers, manufacturers and special exporters, it is absolutely necessary to participate in the discussion of the contract conditions on armored vehicles of the management of the KMDB and the Malyshev Plant. And to have defining voices in such positions as terms of delivery of equipment, volumes and order of service, definition of composition and volume of the supplied documentation and a number of similar questions.

As for commission payments, I would suggest that this position be consolidated at the legislative level. Then, the issues of commerce, which start to prevail over the development of the school itself, will not be a brake on promoting new ideas, introducing new technologies, modernizing the main production assets.

Of course, in addition to the above requirements, there should ideally be state support in the form of state defense order.

The defense industry cannot be used as a cash cow.

If we talk about the direction in which new tanks and lightweight armored vehicles can develop, I would emphasize the following.

The world is on the verge of another leap in the development of combat platforms in general. And it has a direct relationship with armored vehicles. On the one hand, I have already noted the need for the action of each combat unit in a common, unified information field. This applies not only to, say, the close connection between the battalion commander and a separate tank, but the connection of the tank with all types of equipment participating in this battle. That is, the development of information processing systems, data transmission, automated control, together with the computerization of the technology itself, will obviously come out on top. But not only. I am convinced that the possibility of remote control will also be achieved soon. This will not be a tank, but some kind of tool that will perform specific tasks. It is not necessary that specialized armored vehicles, created to destroy certain types of targets, displace existing models of armored vehicles. It seems to me that the combined use of such means of warfare can be quite lengthy. But it is also clear that there is a steady desire to reduce the crew. By the way, in Soviet times, we were one of the first - 30 years ago - to use automatic loader in tanks. They are still working successfully. Moreover, a number of countries - including the United States, Britain, Germany - do not have automatic loaders in tanks, and their crew consists of four people. And we have three for a long time! Now it is necessary to intensify research on the possibility of reducing the crew to two people. In general, the Ukrainian developers of armored vehicles should not remain aloof from the development of the prospects for the main areas - robotization, intellectualization, and computerization of equipment. ”

Ctrl Enter
Noticed oshЫbku Highlight text and press. Ctrl + Enter
We are
Armor is strong. Report from the armored plant, where equipment is repaired for ATO (Ukraine)List of destroyed the largest and most high-tech enterprises
112 comments
Information
Dear reader, to leave comments on the publication, you must to register.