The murder of a Russian diplomat in Abkhazia: where can the tracks lead?

11 September 2013
52
9 September. 8: 30 AM. Sukhum. Secretary of the consular department of the Russian embassy in the Republic of Abkhazia 36-year-old Dmitry Vishenyov and his wife leave the high-rise building where they rent an apartment. They follow to their garage, where they get into the car. At this moment, a man approaches the car and practically shoots Dmitry and his wife at close attention. As a result of the attack, a Russian diplomatic worker was killed, his wife was seriously wounded and was taken to a local hospital. Several medical teams are fighting for her life at once. 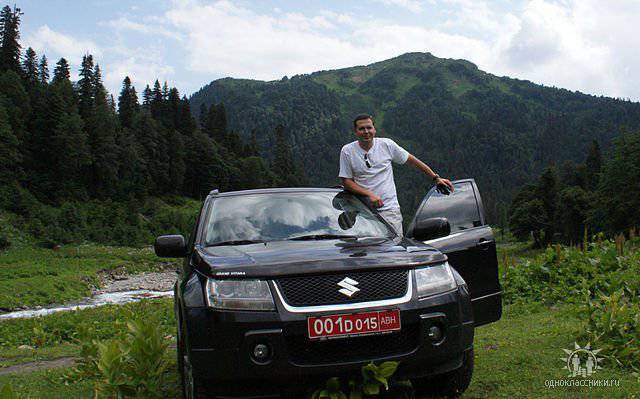 The criminal, without hiding his face, calmly walked past a nearby garage, next to which was a stunned witness of the attack, and without touching it, he disappeared.

The operatives who arrived at the scene of the tragedy, in addition to the spent cartridges, discovered an explosive device, which the killer apparently intended to use in the event that the attempt on a diplomat with the help of a rifle gun weapons will not lead to the expected result of the offender.

As soon as news of the murder of a Russian diplomat in the capital of Abkhazia was circulated by various media, a prevailing version was issued. According to this version, Dmitry Vishernev was killed in order to shake the friendly relations between the Russian Federation and Abkhazia. At least, such words were expressed by representatives of the Abkhaz leadership, as well as the Russian Foreign Ministry.

Upon the crime committed in Abkhazia, a criminal case was initiated immediately under three articles of the Criminal Code of the Republic of Abkhazia: Art. 29 part, Art. 99 part 2 A "Attempted murder of two persons", Article 99 part 1 "Intentional murder", Art. 217 part 1 "Illegal acquisition, storage of firearms and explosive devices." President Alexander Ankvab said that he takes the course of the investigation under his personal control. To uncover this audacious high-profile crime, a special commission has been created, which includes both representatives of the Ministry of Internal Affairs of Abkhazia and members of the State Security Service. According to some data, in the near future, a Russian investigation team may fly from Moscow to help solve the crime to Abkhaz colleagues.

Obviously, the murder in the Abkhaz capital - Sukhum - does not pull into everyday life (for the purpose of robbery, for example) and even more so to ordinary soldiers. The offender was clearly well prepared for him and for a long time watched the movements of Dmitry Vishernoff. The consular officer himself in Abkhazia was very active in protecting the rights of the Russian-speaking population, and was also a member of the Russian-Abkhaz real estate commission. His responsibilities included, among other things, legal assistance to those people who, at the time, leaving the war, abandoned their homes, and today they would like to return to Abkhazia for work and life. Among such people who want to return, the majority are those who are citizens of the Russian Federation. The total number of Russian citizens living in the Republic of Abkhazia is up to 88% of the population of the republic. Most Abkhaz residents have two passports (dual citizenship) - Abkhaz and Russian.

Returning to the murder of a Russian diplomat in Sukhum, one should pay closer attention to the version of such a motive for the murder as an attempt to drive a wedge between Abkhazia and Russia. At the same time, it is necessary to make an assumption about whom this murder was beneficial to. Recalling that one of those countries to which the friendship between Moscow and Sukhum is like a bone in a throat is Georgia, one would assume that Georgian special services had snuck into the Abkhaz capital, armed with small arms and explosives, chose a victim for themselves for a long time and after the choice fell on the secretary of the consular section of the Russian embassy, ​​they did their dirty work. Of course, this is the easiest version for practicing operatives. However, it is hardly worth clinging to this version. Why? The reason is that even the tragic incident that caused the death of a Russian diplomat is unlikely to shake the warm relations between Russia and Abkhazia. Moreover, this murder can even to a large extent contribute to enhancing the joint security of the two countries, especially on the eve of the Olympics.

The Georgian authorities understand this very well, and therefore it would be counterproductive for them to be substituted at such a moment if they are still friends with the head. That is why the possibility of organizing this murder on the orders of the Georgian side seems extremely unlikely. We would like to arrange a pre-Olympic provocation - they would deliver a “blow” closer to the capital of the Winter Olympics ... It’s another thing if these same Georgian authorities are not friendly with their heads (it’s not even about Saakashvili - this is definitely not friendly) ...

But if the Georgian side is hardly worth taking into account in terms of the murder of a Russian diplomatic worker, then to whom could this murder bring some dividends? Before you make assumptions, it is worth giving some statistics. Since 2009, sales of Abkhazian real estate to foreign citizens began to grow at a significant pace. The share of Russians in these purchases was 85%. No, not at all those Russians who live in the territory of Abkhazia and have dual citizenship, but Russians who arrive for Abkhazian real estate from different cities of Russia. Of this percentage of real estate transactions with Russians, almost 70% corresponds to sales of Abkhaz houses, apartments and land to residents of St. Petersburg and Moscow. The growth in sales is associated, among other things, with the renewed policy declared by the former Abkhaz President Sergey Bagapsh. About 4 years ago, he said that it was time to change the Abkhaz legislation, which indicated that only a person who has an Abkhaz passport can acquire real estate in the republic. The change of policy led to a rapid growth in real estate sales on the Abkhazian “Cote d'Azur” to foreigners.

It is noteworthy that at the same time his work in the Russian consulate (during the renewal of the policy regarding the sale of Abkhazian real estate) was started by Dmitry Vishernev. During his activity at the Russian embassy, ​​according to his colleagues at the Russian diplomat, he was able to resolve a large number of disputes over the purchase of real estate in Abkhazia. Obviously, such work of Vishernev could not appeal to certain circles within Abkhazia itself. The fact is that local, let's say, authorities would clearly not want to lose the levers of managing the real estate market: the loss of real estate is the loss of income from the super profitable tourism business. The groups, which used to feel like owners and conduct business, did not like the fact that the number of Moscow and St. Petersburg owners of elite real estate in Abkhazia is increasing, and their incomes, respectively, are decreasing.

Here the idea could have arisen with one shot to solve several problems at once. Firstly, they kill the person who was directly responsible for legal assistance in obtaining the right to Abkhazian real estate, secondly, this person is a Russian diplomat, which means that the investigation can follow the search for Georgian spies and scouts who wanted to break off friendly and partner ties between Sukhum and Moscow. And there is also a “third” - a signal to a potential mate Dmitry Vishernova that it is necessary to choose new versions of his consular work, which would be more, let's say, neutral. In this case, the Abkhaz criminal gangs elimination of the Russian diplomat was much more profitable than anyone else. By the way, it can be assumed that both the Abkhaz and Russian special services will be looking for a possible customer for a crime inside Abkhazia without much enthusiasm, concentrating their full potential on the Georgian direction ... Just the fact of having an Abkhaz customer is not beneficial for Russia or Abkhazia, bearing in mind the attitude two countries. And, therefore, it is possible that in the near future, this very organizer of the crime “will be determined” on the other side of the Abkhaz-Georgian border.

Business and politics, unfortunately, require sacrifices ... And Dmitry Vishernev got into this moloch.

Ctrl Enter
Noticed oshЫbku Highlight text and press. Ctrl + Enter
We are
Korean People's Army. Small and heavy infantry weapons. Part of 2Results of the week. "From eight in the morning to ten - a feat"
Military Reviewin Yandex News
Military Reviewin Google News
52 comments
Information
Dear reader, to leave comments on the publication, you must to register.