Africa and the European Union rallied against offshore oil pirates

12 September 2013
17
At the end of August in Lagos, the economic capital of Nigeria, the international conference “Ensuring maritime security in Africa” was held. The place was chosen for a reason: in the region of the Gulf of Guinea, merchant ships are often attacked by pirates. Today, West Africa wants to take an example from East Africa, in order not only to put an end to maritime piracy, but at least to adequately protect itself from it, as well as to stop the flow of drugs through West African ports.


As transmits ITAR-TASS, at the conference in Lagos, Vice-Admiral Jürgen Elet, commander of the European military mission in West Africa, noted that "the EU is preparing its strategy in the Gulf of Guinea." European leaders intend to draw up a plan already "by the end of October of this year."

Referring to the experience of East Africa, Erle remarked that the use of warships there contributed to a reduction in the number of pirate attacks against civilian ships. This tactic was not fully applied in West Africa. Everyone is interested in protecting energy sources, Jürgen Ehle said, and added that EU countries consider it necessary to strengthen the fight against the transit of drugs through West African ports and illegal fishing.

Therefore, henceforth, emphasis will be placed on the coordination of operational actions of the naval forces of various countries and on the training of relevant personnel.

Moreover, while developing a new strategy, the German admiral noted, it is impossible to rely solely on warships. It is important to provide for the development of programs to overcome poverty and end violence in the region.

Corr. ITAR-TASS cites data from the British analytical center Chetham House, according to which the number of pirate attacks on merchant ships in the Gulf of Guinea increased from 39 in 2010 to 62 in 2012. Most often, pirates seize oil tankers.

Political commentator Valentin Kryukov ("Inforos") notes that filibusters attack in the territorial waters of one country, while hiding off the coast of another. About half of the pirate raids occur in the internal waters of Nigeria.

Local conditions favor the robbers' outing: unrest in the region and the high world price of non-oil.

At the conference, the chief of staff of the Navy of Nigeria, Vice-Admiral Dele Ezeoba, noted that “pirates have become a real threat to African maritime trade and economic progress. Robbery of oil, industrial goods causes direct damage not only to coastal countries, but also to landlocked. "

Over the past ten years, the region’s countries have lost 100 billions of dollars due to the pirate theft of oil. Oil theft is accompanied by the taking of hostages, damage to the means of delivery of oil, pollution of the environment.

At the conference in Lagos, it was decided to form a kind of rapid reaction force, similar to those used off the coast of East Africa. As the author notes, the presence of international naval forces, including Russian warships, has led to a significant reduction in the number of robberies there. In 2011, there were 129 attacks of pirates on merchant ships, and in 2012, the number of pirated “shares” was reduced to 19.

The results of the conference were summed up by Desiani Alison-Madueke, Minister of Petroleum of Nigeria. She called the situation in the Gulf of Guinea "unacceptable": after all, only in six months of the current year 55 attacks on tankers were recorded. According to Alison-Madueke, the fight against piracy will require a long time and joint actions by the states of the region and their partners.

It should also be noted that maritime piracy in the gulf is half the trouble for Nigeria.

As reported by 12 July correspondent ITAR-TASS Alexander Nechaev, theft of oil in the country led to another closure of the Shell pipeline, which reduces supply by 150 thousand barrels per day.

The company said it had shut down the Transnigerian oil pipeline due to a leak: “In recent months, TNP pipelines have repeatedly become the target of oil thieves. As a result, they had to be closed to eliminate theft points. ” 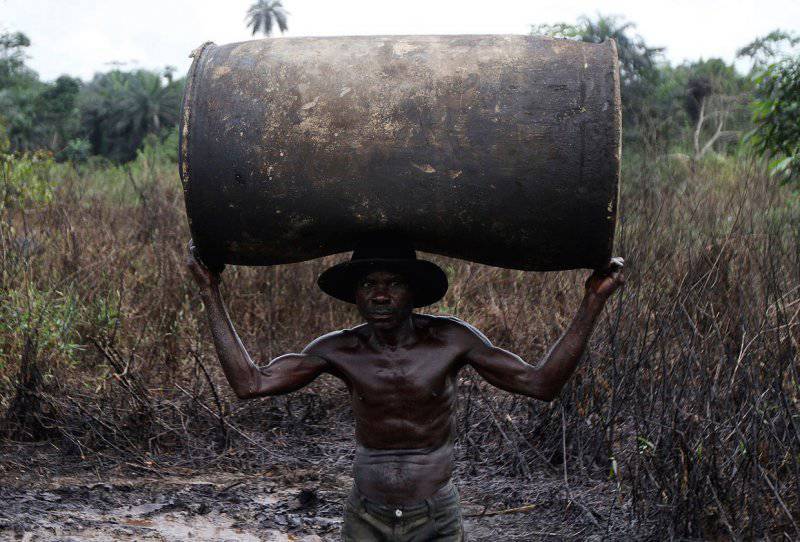 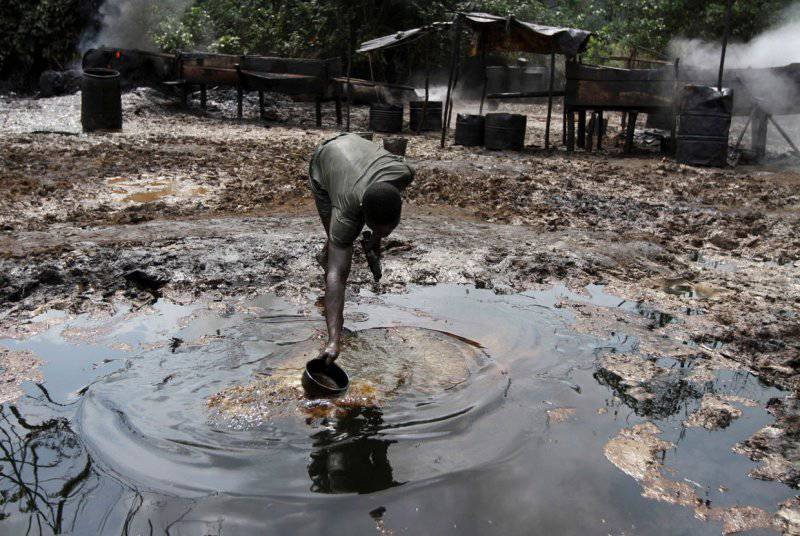 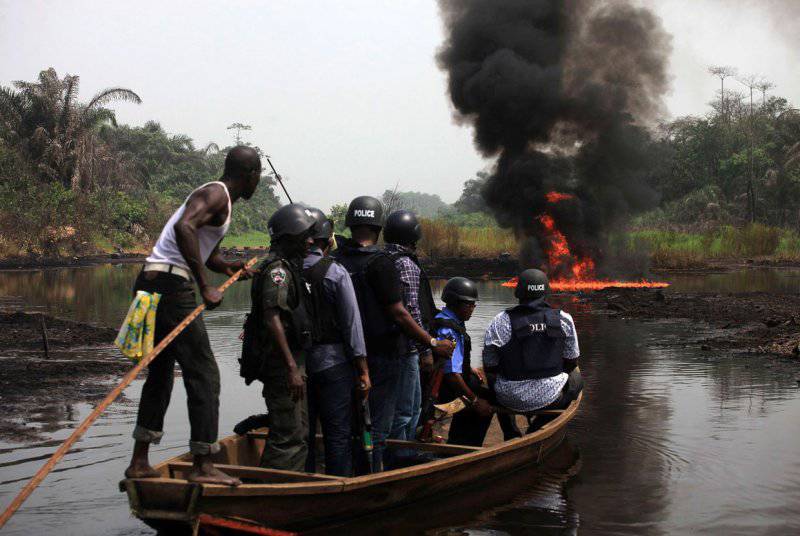 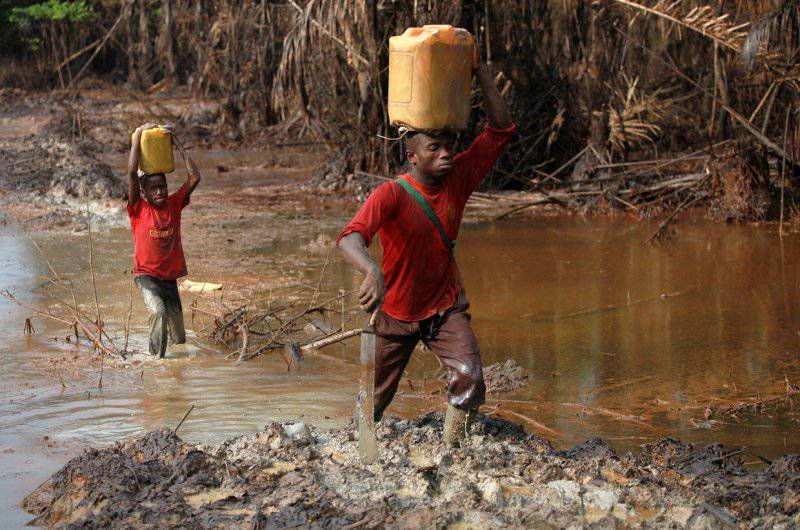 Alexander Darmin (magazine.neftegaz.ru) Recalls that Nigeria is the key to the entire African continent. Almost half of all gas reserves in Africa are concentrated in this country. 95% of the export value of the African state is oil. The country is in seventh place in the world in oil exports and participates in OPEC. Confirmed oil reserves in Nigeria reach about 35,5 billion barrels. (almost 4,8 billion tons). Every day you can extract 3 million barrels. (150 million tons of oil per year). Nigeria’s oil reserves will last for 10-15 years. However, according to the IMF, for the 40 years that have passed since the start of oil production in Nigeria, the share of the country's population living on less than 1 dollars per day increased from 27 to 66%.

At the same time, the country is forced to import electricity. Revenues from oil exports do not improve the situation of the local population, but are plundered by the rulers. Instead of becoming the basis for the prosperity and development of the national economy, the author writes, "Nigerian oil revenues were simply squandered and plundered by a succession of ruling regimes." Only the dictator of Nigeria 1990-s, General Sani Abacha, during the five years of his reign, “stole” about 4 billions of dollars from the sale of oil.

Nevertheless, to some extent, the oil industry in Nigeria continues to grow. To reduce losses from piracy and theft, which flourish against the background of widespread poverty and corruption, local big businessmen are trying to find workarounds.

The president of the Dangote Group, Aliko Dangot, the richest man in Nigeria, for example, said that his company received a loan of $ 3,3 billion for the construction of an oil refinery complex. Reports about it RBC with reference to the Associated Press. The project cost reaches about 9 billion. The loan was given to 12 by Nigerian and international banks. The refinery complex will start functioning in 2016 year.

Presumably, if the project is implemented, it will help reduce the dependence of Nigeria on the export of "black gold", and at the same time eliminate the attacks of sea "filibusters".

Ctrl Enter
Noticed oshЫbku Highlight text and press. Ctrl + Enter
We are
African "Caliphate". Northern Nigeria follows in the footsteps of the Middle EastAfrican arrows: British colonial troops became the basis of the armed forces of the independent states of Africa
Military Reviewin Yandex News
Military Reviewin Google News
17 comments
Information
Dear reader, to leave comments on the publication, you must to register.