The role of the space control system (SSS) in ensuring the national security of the country is difficult to overestimate today. 17 July 2013 was exactly 25 years since the establishment of the Main Space Intelligence Center of the East Kazakhstan Region. What path has he traveled during this time and what tasks does he solve today?

The SCCU is an integral part of the country's aerospace defense and has its own characteristics. This is a large information system that combines the capabilities of all the facilities of the Ministry of Defense and civilian agencies, designed for continuous, continuous and global assessment of the space situation in both peacetime and wartime.

Only in the USA and Russia

KKP system has its history creation and development. The need to monitor space objects has arisen since the launch of October 4 1957, the first artificial satellite of the Earth, with the beginning of the space age. The clearly defined tasks of continuous and continuous monitoring of space objects raised the question of developing means of observing and processing measurement information that would allow taking such measures that would be able to carry out space activities with guarantee.

Currently, we can trace the dynamics of the increase in the number of space objects. If in 60-ies the number of KOs was in the hundreds, in 80 – 90-e, in the thousands, then today we are talking about tens of thousands of objects and this is far from the limit. But this phenomenon has a negative side. Intensive exploration of space, the destruction of a number of KOs for various reasons led to the fact that a large number of fragments appeared in orbits, representing a real threat to both operating spacecraft and manned space station. There was even the term "space junk".

At the first stage of the creation and development of the SCCE, the tasks of monitoring the state of the spacecraft were solved by attracting funds from the ANS, ABM, and optical observation stations of the Astro Council of the USSR Academy of Sciences. But even then it was understood the need to have their own specialized means of the PSC system.

In 1975, the CCKP was established, which was armed with the multiprocessor computing complexes Elbrus-1 and Elbrus-2. The center is capable of processing a large flow of radar and optical information. In the same years, the large-scale construction of specialized means of the space monitoring system began. By this time, the flow of radar and optical information had reached an enormous amount, over 60 of thousands of orbital measurements per day, and the need for precise determination of the orbital parameters of a single orbit by position and time increased sharply.

By the end of 80-s, it became obvious that such a system should have unified management, because the funds were located at a considerable distance from each other, and their subordination did not allow to effectively solve the tasks. 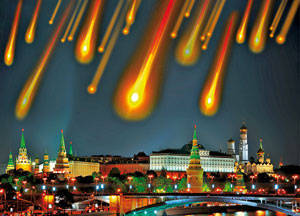 17 July 1988 was formed a separate corps control space, which was later transformed into a division, and today - in the Main Center for the exploration of the space situation. The first corps commander - Lieutenant-General A. Suslov, generals G. Dobrov, V. Derkach, S. Lobov, O. Frolov, V. Lyaporov, A. Nestechuk, who later led the formation, laid the foundation of today's national KKP system.

I emphasize that the SCC is a national system of a country that is unique. Hence, its main strategic mission is to ensure continuous global monitoring of the state of the space situation in order to create the security of the space activities of our state. It is probably clear to everyone that today’s outer space is the area where the main means of command and control are concentrated. weapons, intelligence, communications, navigation, meteorology of foreign countries, and the space itself, along with the sea, land and air, is gradually becoming the main sphere of warfare. As the experience of conducting military operations of the last decades shows, it is precisely through outer space that all groups of forces are managed, all types of reconnaissance are conducted, and communications are provided. And such systems are developing in all countries.

At present, only the Russian Federation and the United States have national space control systems, but other states participating in international space activities are moving towards the creation of such systems. First of all, the countries of Europe, through the European Space Agency, and China. And here it is important to be able to obtain reliable information about the space situation.

Therefore, the main tasks that are defined for the Main Center for Space Intelligence are:

Ctrl Enter
Noticed oshЫbku Highlight text and press. Ctrl + Enter
We are
The militarization of space is inevitableWays to build the East Kazakhstan region
Military Reviewin Yandex News
Military Reviewin Google News
21 comment
Information
Dear reader, to leave comments on the publication, you must to register.