Supernova of the Ground Forces

11 September 2013
61
The current organizational events are not a victory of the military over a civilian reformer minister, but a balanced and thoughtful approach.


With the departure of former Defense Minister Anatoly Serdyukov and Chief of the General Staff Nikolai Makarov, who noted that the Armed Forces of Russia had been brought to the so-called new and modern appearance, transformations in the military department did not stop. However, the next changes take place with a different vector.

In contrast to the reforms of Serdyukov-Makarov, widely reported in the media, the new phase of the construction of the Armed Forces is in complete silence. Only individual elements of a large mosaic, complex transformations, jokingly called supernova in military circles, are becoming public. It is worth noting that the current reforms have found a complete understanding of the military, which cannot be said about the new and modern looks that are actively criticized by the military. At the same time, the media and ordinary citizens see the changes just as the rejection of all the decisions of the ex-minister, so to say the victory of the military over the “progressive reformers”. But in reality, to the credit of the defense department, this is not so. For the first time in 30 years of continuous reforms, the next transformations in the RF Armed Forces are conducted thoughtfully, without haste and taking into account the views of military science, field commanders and military officers.

The main direction of the reform of the Armed Forces of Russia has traditionally been the Ground Forces, which, together with the Air Force, have taken the main blow of a new and new look. The resignation of Anatoly Serdyukov found the "land" at the crucial moment of his transformation. As you know, in 2008 it was decided to abandon the divisions, reorganizing them into brigades, reduce army control, and reorganize military districts into operational commands. Officially, these organizational and staffing activities were completed by August 2010. The motorized rifle brigade (ICBM) of the new look included three motorized rifle, one tank battalions, two artillery, one anti-tank and one jet divisions. Later, an reconnaissance battalion was reorganized from the brigade reconnaissance. From the air, the ICBM covered the anti-aircraft missile and anti-aircraft missile and artillery divisions. The brigade kit included communications battalions, engineer and engineer, repair and restoration and material support, as well as a commandant company. Brigades were reorganized from divisions. Tank brigades (brigade) differed only in the number of tank and motorized rifle battalions (three tank and one motorized rifle). The directorates of the combined-arms armies were liquidated - the Moscow brigade and the armored brigade were directly subordinate to the operational command (in peacetime, the military district). 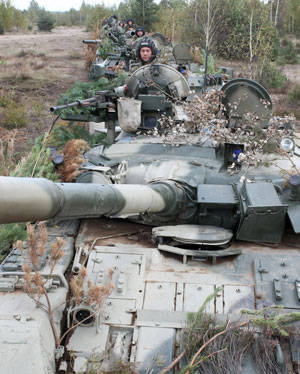 The Vostok-2010 strategic exercises that took place in 2010 in the Far East, in Siberia and Transbaikalia showed all the flaws of the new-look brigades overloaded with artillery, sappers and air defense, with weak rear, repair facilities and practically no infantry. As the officers of the Central Military District (TsVO) joked, this is a “sapper-artillery-zenith brigade”. Therefore, in the autumn of 2010, the Chief of the General Staff, Army General Nikolai Makarov, proposed to conduct the next re-formation of the ISCs and the TGRs into light, medium and heavy brigades. As the newspaper "Military Industrial Complex" was told in the commands of military districts, all Ground Forces had to move to new states by 2013 – 2014 years.

“As an experiment in the Southern Military District (SKR), the 56-I airborne assault brigade became easy. This happened at the end of August 2011. Long could not decide on the final version of the state and technology. At first it was assumed that the infantry would move on foot, then decided that the cars. In the fall, we received the Oise, but in December we were told that they would be replaced by the Italian “Lynxes” of the Iveco company, said an officer of the Southern Military District, who is familiar with the situation.

As the leadership of the Ministry of Defense emphasized, all new brigades were experimental. The former commander-in-chief of the Ground Forces, Colonel-General Alexander Postnikov, was appointed responsible for the development and introduction of new states, under whose leadership several pilot exercises were held. At the same time, it was decided to abandon the creation of an experimental middle brigade. From the light hand of the media, the transition to unified associations was given the name - the newest look.

On the eve of the 2011 of the year, the ground forces merged the logistical and repair units. As a result, the brigade had a difficultly managed logistics battalion (BMTO) of seven companies, which included material support and repair and recovery battalions. At 700 staff, there were only seven officers and soldiers of the Russian army in BMTO.

An analysis of experimental exercises with light and heavy brigades conducted in August 2012 showed that this was far from ideal, but much better than the motorized rifle and tank brigades of the new look.

In developing the state-of-the-art brigade staff, subordinate to the Chief of General Staff Nikolai Makarov, the Main Organizational-Mobilization Directorate (GOMU) focused on the US Army, from 2006, consisting of unified "modular" heavy, infantry and "Stryker" brigades created according to the experience of waging the war in Iraq and Afghanistan. At the same time, copying the squares of the US staffing tables, the creators of the Russian teams missed several important points.

With all the modularity, heavy and infantry brigades rely not only on their rear units, consolidated into a support battalion, but also on the divisional support brigade. The exception is the Stryker Brigade, equipped with armored personnel carriers. Created for expeditionary operations and transferred by air in full force to any region of the globe within four to seven days, these brigades in their composition do not have any rear units. On the first day, Stryker acts using the reserves at its disposal and transported on its equipment, and after that the divisions and corps deployed at the theater of operations of the brigade of material support (brmto) are engaged in supply. Without their support, the "modular" brigades of the US Army cannot fight. At the same time, with a weak rear of the combined-arms brigades of Russia from the army brigades of material and technical support there is little sense. In contrast to the American divisional bureau, the Russian will have to work not with two or three, but with five — seven, and sometimes with ten brigades. The weakness of the domestic system was shown in the 2011 exercise "Center". Fortunately, they were held on their territory and stocks of material resources were created in advance.

When developing "modular" brigades, the US Army proceeded from the principle "The main striking force of the brigade is the infantryman", and the Russian GOMU - "The main striking force is the technique." The Americans infantry brigade - it is an infantryman without equipment. In the Armed Forces of Russia, a light brigade is a light combat vehicle: vehicles and armored personnel carriers. As a result, the 56 state was built on the basis of the main machinery of the brigade - UAZ light vehicles, and in the long term, “Lynx”. Hence, small rifle squads of seven to eight people in comparison with the US 15 – 20 people.

The Russian counterpart of Stryker - medium brigades turned out to be unrealizable. More than 80 percent of the Stryker Brigade is the Stryker wheeled armored personnel carriers of various modifications, not only carrying infantry, but also reconnaissance, engineering, medical, fire support and anti-tank ones. All the rest is Hummer trucks and jeeps. There is no tracked vehicle, and instead of tanks a mobile artillery system with an 105-mm cannon is a “wheeled tank”. Such a brigade, capable of making long marches, is easily transported by air and takes place in a battlefield within a few days.

The Russian "defense industry" to please the Ground Forces with a similar multi-purpose machine "Stryker", alas, cannot. The only option is the BTR-80 / 82, but in this case more than half of the fleet of equipment of the average brigade will be on tracks. The solution was found in the procurement of the Italian "wheeled tanks" "Chentauro" and the development of artillery systems and air defense systems on wheeled chassis. But until the resignation of Serdyukov and Makarov, the state of the middle brigade remained on paper.

6 November 2012 of the year Russian President Vladimir Putin dismissed Anatoly Serdyukov. In a short time, General of the Army Nikolai Makarov, Chief of the General Staff, also left military service. Until the end of 2012, the new leadership of the Ministry of Defense understood what was going on. Instead of Colonel-General Alexander Postnikov, Deputy Chief of the General Staff, the Ground Forces were headed by Colonel-General Vladimir Chirkin. After four years of continuous reforms, the new commander-in-chief came to the ruins of the old system and the unfinished framework. The MSCR of the new look turned out to be too cumbersome and ineffective, while the unified brigades were just an experiment.

In December, 2012, the Ground Forces sent the first proposals on the states of the new brigades to GOMU. It was decided not to abandon the Makarov idea of ​​heavy, medium, light brigades. We have with the states an eternal confusion, that before the new look, that when Serdyukov there was not a single brigade. So their unification of the Ground Forces is very necessary. Nikolay Egorovich spoke about this even in the summer of 2008, when he reported on the prospects for a new look. But then the rush began. And by May 2009-th developed new states and launched them. As a result, it turned out not as better, but as always.

In order not to repeat the mistakes of the reformers, the changes in the Armed Forces should be considered carefully and thoughtfully. Judging by the first steps of the leadership of the defense ministry, it was decided to carry out transformations in this direction in this way.

And we will tell about it in one of the nearest numbers.

Ctrl Enter
Noticed oshЫbku Highlight text and press. Ctrl + Enter
We are
Military reform as an integral part of the security concept of the Russian Federation: Systematic dynamic assessmentHow can Russia survive and win in the 21st century?
Military Reviewin Yandex News
Military Reviewin Google News
61 comment
Information
Dear reader, to leave comments on the publication, you must to register.