The latest developments to the troops do not reach. The Russian Armed Forces still do not have modern means of communication

10 September 2013
119
The capabilities of the tactical link communications equipment of the Armed Forces of Russia remain at a low level. The latest developments in this field, presented at international and national exhibitions of armaments and military equipment, are not coming into service, but continue to be only demonstrators of high technologies, while communications are delivered to the troops of previous generations that are already morally obsolete and do not meet the requirements of modern network-centric of war.


In particular, during the MAKS-2013 air show in Zhukovsky near Moscow at the stand of the Interstate Development Corporation (MKD), models of the latest developments of the Omsk Production Association Radio Plant named after A. Popov, an integrated transport multifunctional communication equipment (CAS-TM), were presented and integrated transport retransmission hardware communication (CAS-TR), tests of which have recently been successfully completed.

As explained at the MKR stand, the field three-dimensional transport communications network is a network-centric technology implemented on the basis of CAS using DSAR + active repeaters and unmanned aerial vehicles, which allows to significantly increase mobility and stability of communications during the preparation and conduct of combat operations to change the combat situation.

KAS-TM, for example, is used to build transport networks of various architectures and communication typologies and is intended to work as part of the communication reference nodes of the operational and operational-tactical command and control links. The high tactical and technical characteristics of the CAS-TM were confirmed, in particular, in March of this year during its transfer to Pskov to the place of the display to the Minister of Defense Sergey Shoigu of the latest models of military equipment and weapons. At the same time, the distance in 3400 kilometers was covered along the Omsk-Pskov route, which includes mountain passes and impassable areas. 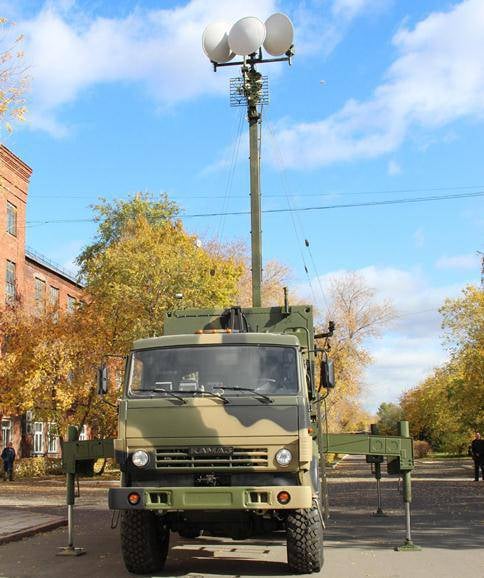 However, so far these new developments have not entered service with the Russian army, which, by inertia, continues to buy communications equipment of previous generations.

The problem with the tactical link was clearly demonstrated back in 2008, when a number of problems emerged in the course of preparing and conducting an operation to force Georgia to peace that needed to be addressed immediately to significantly increase the combat potential of the ground forces. The then head of the Main Directorate of Combat Training and Service of the Armed Forces of the Russian Federation, Lieutenant General Vladimir Shamanov, identified three main shortcomings that were identified during the hostilities: poor organization of interaction between the Ground Forces and the Air Force, problems with ensuring stable communications and low resolution of reconnaissance equipment. “It got to the point that in the interests of ensuring action aviation combined-arms units designated their leading edge with smoke, and this is not just an anachronism, but a crime, because by doing so we show the enemy the outline of our front edge, which allows him to aim fire at our troops, ”Shamanov emphasized then.

Five years have passed, and the situation has not changed. The weakness of tactical communications is again demonstrated, but now within the framework of a sudden check of the readiness of the troops of the Eastern and Central Military Districts (VVO and TSO). As the Defense Minister of the Russian Federation, General of the Army Sergei Shoigu, noted during the “debriefing”, the troops once again faced the limited communication capabilities of the tactical link: “They are morally outdated, which led to delays in the transmission of combat information and made it difficult to accomplish the tasks set.” “Since communication is the basis of management, the successful outcome of the battle directly depends on its uninterrupted and high-quality work. Thus, I consider the priority task for the Ministry of Defense to bring the capabilities of the tactical-level communications equipment to the needs of command and control bodies and troops, ”Shoigu set the task.

As commented on the current situation with the absence of the latest tactical communications systems in service of the Russian army, Ivan Polyakov, the general director of the Interstate Development Corporation, the first deputy chairman of the Business Council of the Interstate Commission for Military and Economic Cooperation of the Organization of the Collective Security Treaty, the branch of the military fulfills all of its latest developments, including those developed by the initiative row.

“With regard to the insufficient equipment of our Armed Forces with tactical communications, one of the possible reasons is the low rate of introduction of the latest models of communication technology due to the underestimation by the customer of the potential of high-tech development initiatives, as well as their very poor use and implementation,” Polyakov said. According to him, two years ago, the Omsk Production Enterprise "Radio Plant Named after A. Popov" created the latest integrated hardware communications, which in all its characteristics greatly exceeds the systems that are being purchased by the aircraft today.

“In the transition to serial purchases of such products, the Ministry of Defense could achieve substantial savings with a very serious increase in the efficiency of using new equipment. However, until now, despite the successful completion of the state tests of this latest integrated hardware communications cycle, its serial purchases have not started, ”he stressed.

Thus, if we compare the results of the participation of the Russian armed forces in combat operations of the 2008 and the exercises of the 2013 of the year, the situation with the equipment of military units with tactical-level communications equipment has not only not improved, but continues to deteriorate. And this happens in a situation when the defense complex has created and tested communication facilities that meet the requirements of today's and even tomorrow.

It would seem that all responsible persons are well aware that the combat capability and effectiveness of power units, including the Airborne Forces, is determined primarily by the level of technical equipment and the modernity of the weapons and military equipment used. But then the question naturally arises regarding the persistent reluctance of the Ministry of Defense of the Russian Federation to adopt a new communication technology. What prevents, for example, relevant departments from conducting comparative field tests of purchased telecommunications complexes of previous generations and the latest initiative developments in conditions close to combat ones?

Probably, this question should be addressed not only to the leadership of the Ministry of Defense, but also to the Federal Security Service of Russia, whose task is to ensure the national security of the country. It is quite possible that the metastases of the Serdyuk oblast struck not only the economic structures of the Ministry of Defense in the face of the defrauded Oboronservis, but also those departments whose task is to purchase the latest weapons and military equipment for the needs of the Armed Forces and which continue to purchase tactical communications of previous generations. Or we will wait another five years, when, after the next training exercises on a sudden check of the readiness of the troops, the Minister of Defense will again sum up and report that they are just as disappointing for the means of communication of the tactical link as this year.