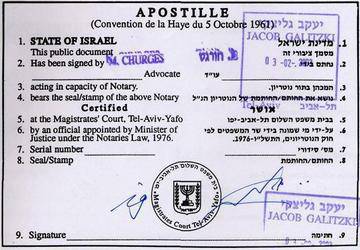 With frequent business travels from one country to another, it becomes necessary to provide certain documents. Prior to the Hague Convention Model 1961, business travel abroad was hampered by the need for consular assistance each time to verify the authenticity of a document. For example, if a marriage certificate was required for a person who arrived from Australia in the USSR, he would have to contact the Australian consulate, which issued proof of the authenticity of the document. In this case, the assurance procedure could be delayed for long months.


In 1961, this problem was solved by joint efforts, introducing the so-called apostille as a document confirmation option. This is a proof of authenticity that is issued in the country of receipt of the document, and then can be translated into the language of interest. Many use special templates for translation. Today apostille transfer patterns can be found at the legal translation office.

In a number of cases, state bodies issue an apostille, which is an imprint of the seal with this or that information. Such a print is attached in a special way to each of the sheets of the document, the authenticity of which must be confirmed in a particular country. The apostille may be attached to the marriage registration document, education certificate and other documents.

The form of apostille is determined by the state. For example, the Russian apostille is quite significantly different from the apostille of South Africa or the United States. But the common features of the apostilles, of course, is. They usually indicate the personal data of the holder of the document, the time of issuance of the document and the apostille, as well as the name of the organization that issued the document. In Russia, the Prosecutor General’s Office, the Federal Archive, the Ministry of Foreign Affairs and other departments and organizations may issue an apostille.

Russia has concluded agreements with a number of countries on the mutual recognition of the legal value of documents. Such agreements allow the use of Russian documents on the territory of foreign countries. For example, there are several countries with which Russia has concluded such agreements: the CIS countries, Georgia, the Baltic States, Poland, Cuba, Vietnam, Hungary, Macedonia and a number of others.
Ctrl Enter
Noticed oshЫbku Highlight text and press. Ctrl + Enter
We are
Our memory. Oryol Frontier, MtsenskToday 79 would be the first man who flew into space - Yuri Alekseevich Gagarin
Military Reviewin Yandex News
Military Reviewin Google News