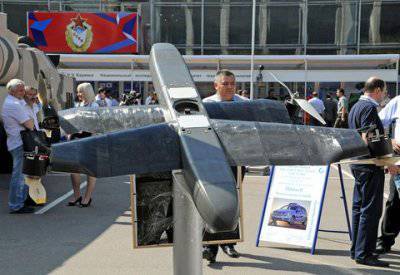 The bulk of modern unmanned aerial vehicles is a remote-controlled aircraft. The number and distribution of helicopters of this class is much smaller, and UAVs of other schemes can be counted on fingers. At the recent exhibition “Day of Innovations of the Ministry of Defense”, the Moscow company “New Technologies” presented an original and unexpected draft of a drone, made according to a convertoplan. In addition to the original architecture, several interesting technological solutions were applied to this project in this project.


So far, the nameless project of the New Technologies company involves the construction of relatively small devices of the original design. The prototype of the perspective machine presented at the exhibition is as follows. The fuselage of the 1,3 meter long meter has a large elongation, and its cross section is close to square. Inside it and on external blocks, it will be possible to install the necessary payload. In the middle part of the fuselage are attached two wings with a span of about one meter, with the front shifted to the bottom of the fuselage, and the rear - to the top. Such a solution was previously encountered on some experimental aircraft and was intended to optimize aerodynamics.

The power plant presented UAV consists of four electric motors. 2700 W motors are placed at the ends of the consoles and drive four two-bladed propellers. Since the promising drone is built according to the convertoplane scheme, all four rotor motor groups are rotating. Depending on the flight mode and operator commands, the screws are in a horizontal (vertical flight or hovering), vertical (horizontal flight) or inclined (transition from horizontal flight to a hanging or vice versa) position.

The normal takeoff weight of the new convertible plane is equal to 18 kilograms. Maximum - on 6 kg more. The device, according to official data, is able to take off vertically and, having developed motors with screws, accelerate in horizontal flight to 234 kilometers per hour. The longest duration and range of flight are achieved at a cruising speed of 150 km / h. Normal flight range and duration are 120 kilometers and one hour respectively. At the same time, representatives of the company-developer noted that the use of a special additional power system allows to increase the duration of the flight up to two days. Technical details of this power system have not yet been announced.

The dimensions, weight and capabilities of the new unnamed UAVs allow it to be used to solve a wide range of tasks related to observation and reconnaissance. There is no talk about striking positions or equipment of the enemy so far - the payload around kilogram 2,5 allows you to take on board only cameras, thermal imagers and transmitting equipment. However, in this form, the new UAV may be of interest to customers. The main advantage of this development is the original power plant, thanks to which the device combines the features of an airplane and a helicopter. It can fly up or hang vertically at a given point and quickly move to a relatively fast horizontal flight.

It is argued that the tiltrotor has advantages over both drone aircraft and remote-controlled helicopters. The former lose to him in their take-off and landing capabilities, while the latter cannot compete with him in range and duration of flight. Thus, the unmanned tiltrotor and similar devices of this class have all the chances to significantly press traditional systems, "winning" from them that part of the tactical tasks that require a long stay in the air, including in one place.

When creating the first prototype of a prospective UAV, New Technologies applied the original technological solution. "Rosinformbyuro", describing the device, quotes one of the authors of the project, A. Chekulaev. As the engineer said, the production of necessary parts was simple and independent of the so-called. human factor. Employees of the company-developer completed all the necessary three-dimensional computer models of parts. Further, without printing drawings, etc. “Traditional” methods information about the size and appearance of the parts was loaded into the 3D printer, which produced parts of the future drone. An inexpensive, but at the same time durable ABS plastic (acrylonitrile butadiene styrene) was chosen as the main material for the hull and wings. This material has long been used in the production of various products, and the creation of a new UAV has shown its prospects in the field of such technology.

The company "New Technologies" attracted to the promising project the company "Aerob". The aim of cooperation was the creation of a control system for a convertible plane. As a result of the joint work of the two companies, a software and hardware complex has emerged that is capable of ensuring the operation of all systems. Among other possibilities of the electronics of the perspective UAV, it is possible to note the stated possibility of automatically returning to the place of launch.

Currently, the only prototype model of the promising drone-convertoplane is undergoing bench tests. Employees of "New Technologies" check the work of various systems, including the complex control system of thrust rotors. Bench tests, and then work on the final design of the system and systems will continue until the end of this year. The first free flight of the prospective vehicle is scheduled for the next 2014 year. 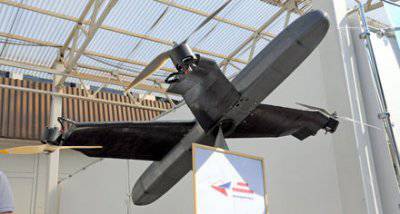 The timing of the start of assembling the first production UAVs created by the New Technologies company remains understandable for obvious reasons. However, this development is of particular interest to customers. A kind of confirmation of this can be considered the attention of several potential operators of new technology. Thus, the Russian Ministry of Defense, following the results of the Innovation Day exhibition, awarded the company New Technologies with an honorary diploma for the development of a convertible plane. Prospective machine has become one of the ten best UAVs presented at the exhibition. The United Arab Emirates military also showed their interest in the unmanned convertoplane. Representatives of the UAE expressed their willingness to buy a certain number of such devices and, if necessary, to finance the completion of their development.

It’s not completely clear what the statements, promises and other words of various interested officials will pour out. However, a drone-convertoplan really is a rather interesting development and therefore in the future it can have great prospects. In the meantime, the company-developer needs to complete the tests, create all the necessary information and promotional materials, and also - last but not least - come up with a name for the new UAV.